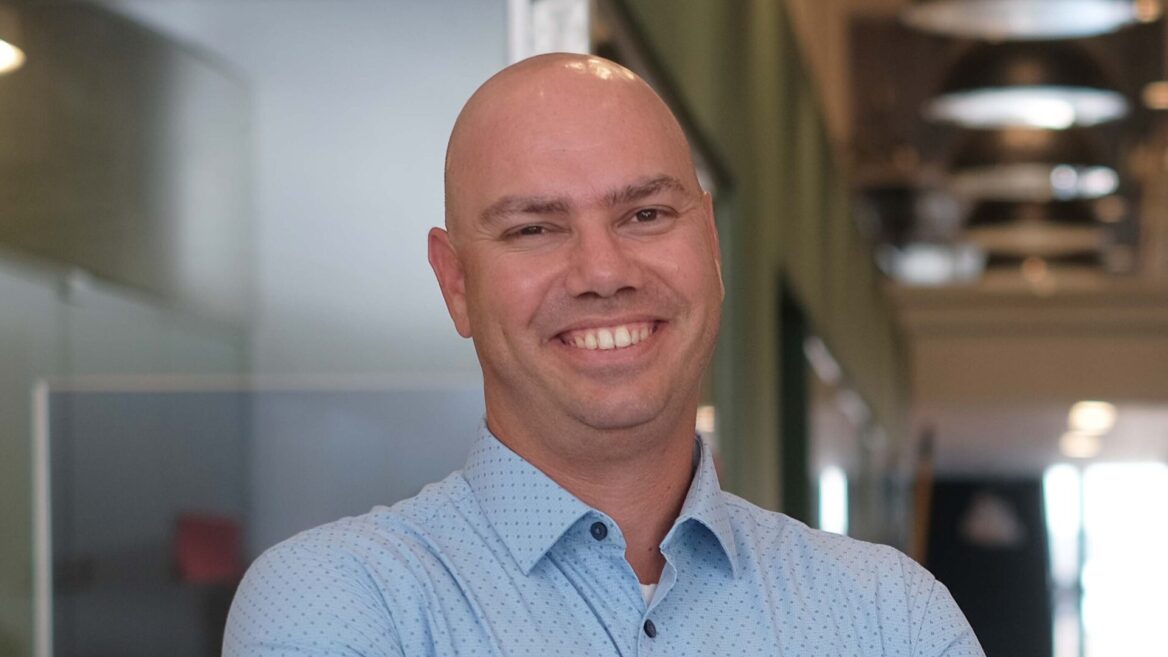 It’s two minutes before nine o’clock, when my interview with BreezoMeter  and CEO Ran Korber is scheduled to begin, and he’s nowhere in sight.

HaNamal Street, renovated and hip, lined with restaurants, cafés and high-tech offices in the once gloomy Haifa Port area, has not quite woken up. The cobblestones are still slippery with the previous night’s rain.

And then at 8:59, Korber breezes in quickly and quietly. He’s wearing jeans and a black T-shirt with the BreezoMeter logo – a cheerful elephant with BreezoMeter’s rainbow-colored Air Quality Index.

With his big smile and dimples, 39-year-old Korber doesn’t look like a cutting-edge entrepreneur who started a company that provides 400 million people around the world with the most comprehensive, real-time information about air pollution, wildfires and environmental hazards.

As a runner with asthma, I use BreezoMeter’s app to decide when to lace up my running shoes, in which direction I should run, and when it’s better for me to retreat indoors, close the windows, and just breathe.

If you ask Siri, “What’s my air quality today?” Siri’s go-to source for information on air quality is BreezoMeter.  Apple, Yahoo and others use its services. The United Nations named the company one of six high-tech companies changing the world for the better.

“I could speak forever about air pollution and environmental hazards,” Korber tells me, emphasizing that the environment is not something that is “out there – it’s very personal.”

It turns out that Korber’s wife also has asthma. In 2012, when she was pregnant with their first child, they wanted to find the healthiest place to live. Korber, an environmental engineer, was shocked to learn that local reports weren’t accurate and pollution sensor units didn’t provide enough information.

Korber asked for help from his best friend, Emil Fisher, a software engineer who loved solving problems, and Ziv Lautman, who worked at the Environmental Protection Agency. The three men’s first assignment was developing an algorithm to calculate environmental factors in several locations.

Fast forward nine years, numerous awards, a visit to the White House and more than $45 million in funding from prominent investors.

Today, BreezoMeter’s advanced algorithms and machine learning can analyze data from satellites and thousands of sensors, incorporating information on dozens of different pollens and pollutants, wildfires, traffic jams and even Super Bowl games to provide real-time, accurate information on air quality around the world.

Air pollution is increasing exponentially; the earth’s disastrous climate changes have caused an uptick in wildfires across the globe. Each year, the severity of these wildfires increases 10 times over the previous year. BreezoMeter’s recently launched live wildfire tracker provides vital information for individuals and businesses.

Studies show that people in areas with high levels of air pollution have higher blood pressure, more asthma, more obesity and exacerbated mental conditions. Where people live, their personal environment, has a huge impact on their wellbeing. The US Congress recently passed a bill to address the disproportionate adverse effects of environmental hazards on people in low-income communities.

At the start of Covid-19 in March 2020, BreezoMeter’s researchers found higher levels of the disease in areas with more air pollution. People with pre-existing health conditions are more susceptible to Covid, and as Korber says, “An area with severe air pollution is a pre-existing condition.” 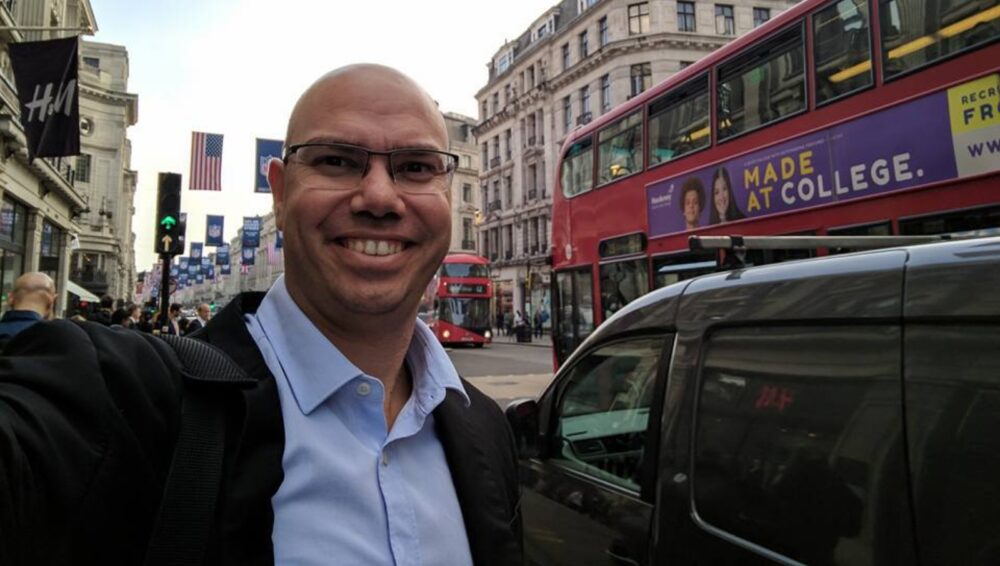 Each year, air pollution kills approximately seven million people. And wildfires intensify that air pollution with dangerous smoke traveling up to 3,000 miles away.

In BreezoMeter’s conference room, Korber opens a map of California where at least two wildfires are raging, spreading air pollution to surrounding states. Until now, he explains, people had little idea in which direction a fire is going and when it would be contained.

He indicates Alisal, a huge fire raging near Santa Barbara, California. I let out a gasp because at that moment, my younger son, Ari, was driving very close to that area. Ari told me later that he had no idea there was a fire blazing near him; it was only because of a sudden change in plans that he didn’t drive right into it. He’s since downloaded the BreezoMeter app. This information could be a matter of life and death.

Temperature is easy to measure –it’s either Celsius or Fahrenheit. But until BreezoMeter invented its Air Quality Index, BAQI, there was no worldwide standard for measuring air quality.

In Hong Kong, for example, the air quality range goes from 1 to 10+, with 10 indicating hazardous air conditions. In the United States, the range goes from 1 (best) to 500 (worst). The BAQI shows zero being the worst and 100 being the best. (“Like in school,” Korber says with a smile.)

BreezoMeter’s index includes ground-level ozone, carbon monoxide and four other major pollutants. People can’t see air pollution, Korber says, which is why it’s so dangerous. Yet you can see the number on the index and easily understand it.

Someone with chronic obstructive pulmonary disease, for instance, can start taking medication in advance because if it’s taken too late, it doesn’t work. Studies show that this forecasting has helped decrease the number of emergency hospital visits by 57 percent, which is good for everyone.

The company recently signed a deal with Volvo, known for its emphasis on car safety, in which BreezoMeter’s information about air quality is included in all new cars’ standard features. If there is a sudden rise in air pollution, drivers can roll up their windows and put on the air purifier system.

The most important mission

Korber says he has always been motivated to search for a way to contribute to the world.

In 2004, before attending the Technion-Israel Institute of Technology, considered the MIT of Israel, he worked as a security guard at a chemical plant. Undecided about what to study, he asked the500 people going in and out of the plant about their job. “Do you enjoy your job? Does it contribute to the world? Would you want your child to do the same kind of work?”

He found that 80% of the people were doing something they didn’t like. He even got up the nerve to pose the same question to the deputy CEO, who said that if Korber studied environmental engineering, the company would hire him. And that’s what happened. 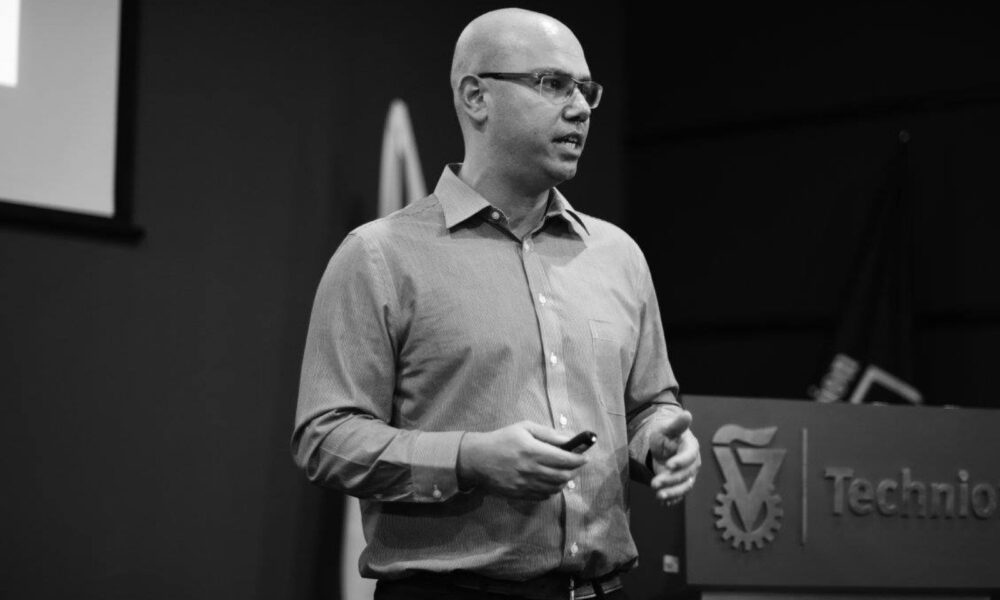 To start BreezoMeter, Korber and Fisher (who also suffers from asthma) quit their day jobs because they realized that “we had the most important mission and we had to invest all of ourselves.”

While Israel is considered the startup nation, there are enormous challenges to starting and sustaining a new company.

“The likelihood of being successful with your startup is about as high as winning the lottery,” Korber says.

And yet they were they extremely successful. The company has raised $45 million to date and has 80 employees including atmospheric, environmental and brain scientists. The plan is to provide even more information, such as earthquake forecasts and radiation levels, andto reach one billion users in 2022.

‘Our thoughts have power’ 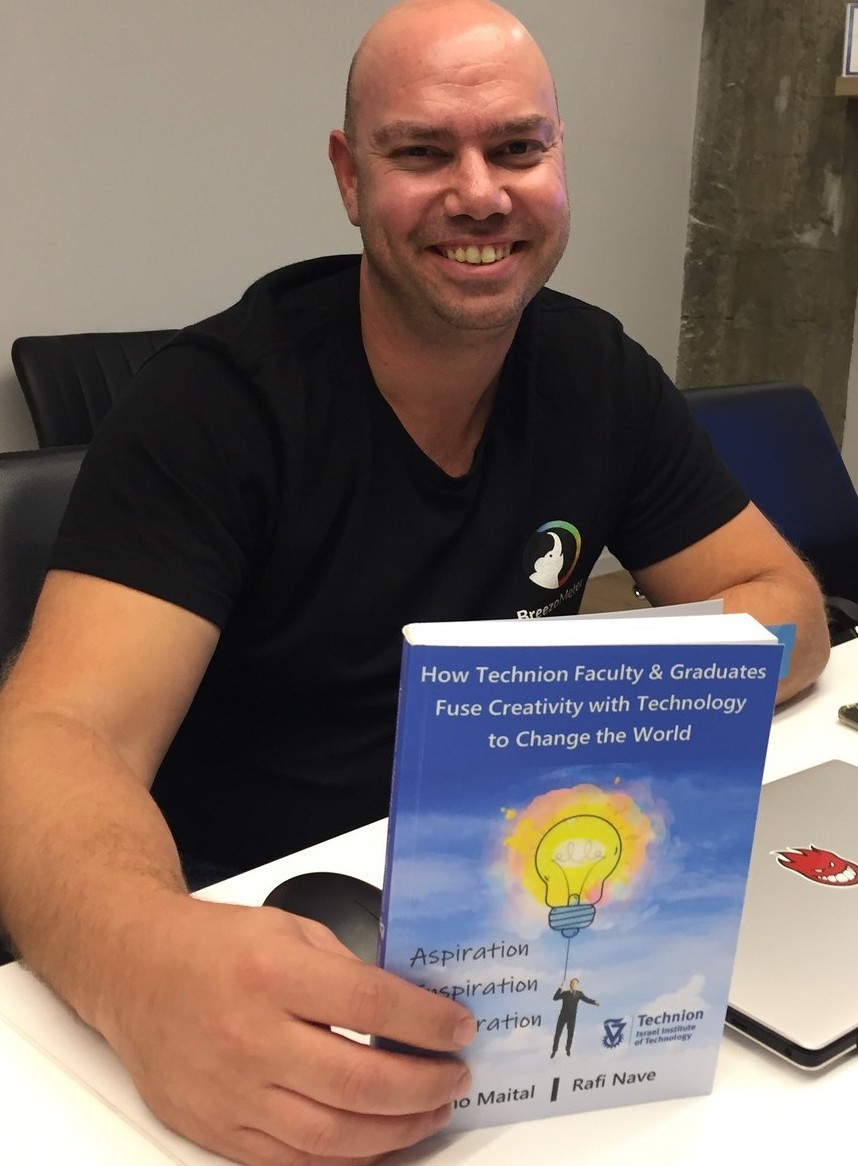 Ran Korber holding the Technion’s centennial book in which he is highlighted. Photo by Diana Bletter

To celebrate its centennial next year, Technion is publishing a book highlighting 100 of its notable graduates — including Nobel Prize winners and Korber, a former chemical-plant security guard.

Korber not only gets to work with his BFF, Fisher, but also tells me that his office location is serendipitous. It’s in the building that houses the well-known restaurant, HaNamal 24, where he proposed marriage to his wife.

BreezoMeter’s offices are all glass-enclosed, as if to emphasize Korber’s idea of company transparency and team effort.

“So, why do you think everything has fallen into place for you?” I ask.

Korber credits the book, The Secret, about visualizing what you want manifested in your life.

“If you think about things, you will be directed to those things,” he tells me.

“Isn’t that a bit—well, unscientific?”

“It makes perfect sense according to quantum physics,” Korber says. “If e=mc2, if energy is connected to matter, then our thoughts have power.”

He also believes that developing positive habits can contribute to success, explaining that we need to “think about what we want to achieveand not what we’re afraid of.” 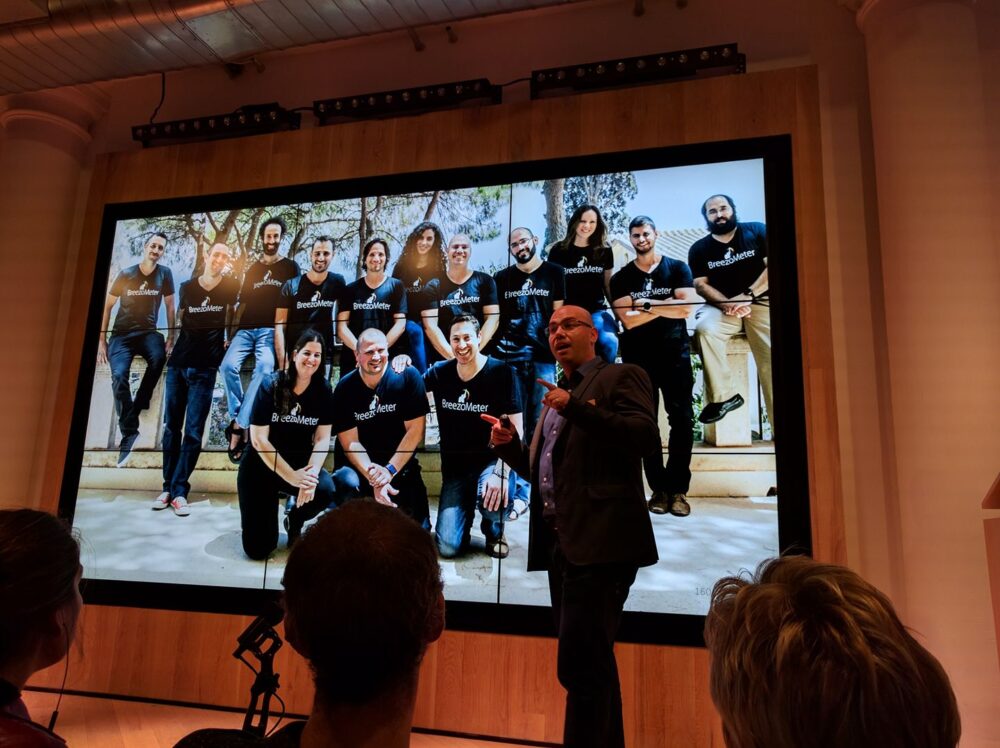 For Korber, finding the right work/life balance has been challenging but since Covid started the company allows people to work remotely, giving employees flexibility.

Some days he works “only” nine, 10 hours a day; other days less (or more). Every day, he meditates and exercises, and he plays basketball once a week at a local court. His average height puts him at a disadvantage, but that says something about his grit. He also carves out time with his two children, ages five and nine, and his wife.

With all their investors, Korber and his partners could already make a fast exit but “we’re not just a startup, we’re a scale-up, built to last.”

I’ve spent almost two hours in the conference room with Korber, completely absorbed by his enthusiasm and determination, and it’s time for his next appointment.

I glance up at a whiteboard on the wall filled with what I’d call hieroglyphics but what Korber says is an example of how “the best minds will find a new solution.”

Then I notice the clock hanging on the wall; its hands have remained on 10 o’clock since I first arrived. Thinking of the old joke, I ask, “How many BreezoMeter employees does it take to fix that?”

Korber shrugs it off. The clock will probably stay stuck. They all have more important things to do than change a battery.

UNCOVER ISRAEL - Get the ISRAEL21c
Weekly Edition free by email
Sign Up Now!
Bring Israel's story to life.
Millions of people around the world rely on us to gain a deeper understanding of Israel. We are the trusted source for original content you won't find anywhere else.
You can make a difference. Donate today to support journalism that brings Israel’s story alive.
SUPPORT ISRAEL21c
Read more on:   Environment, People, Air Pollution, BreezoMeter, Climate Crisis, asthma