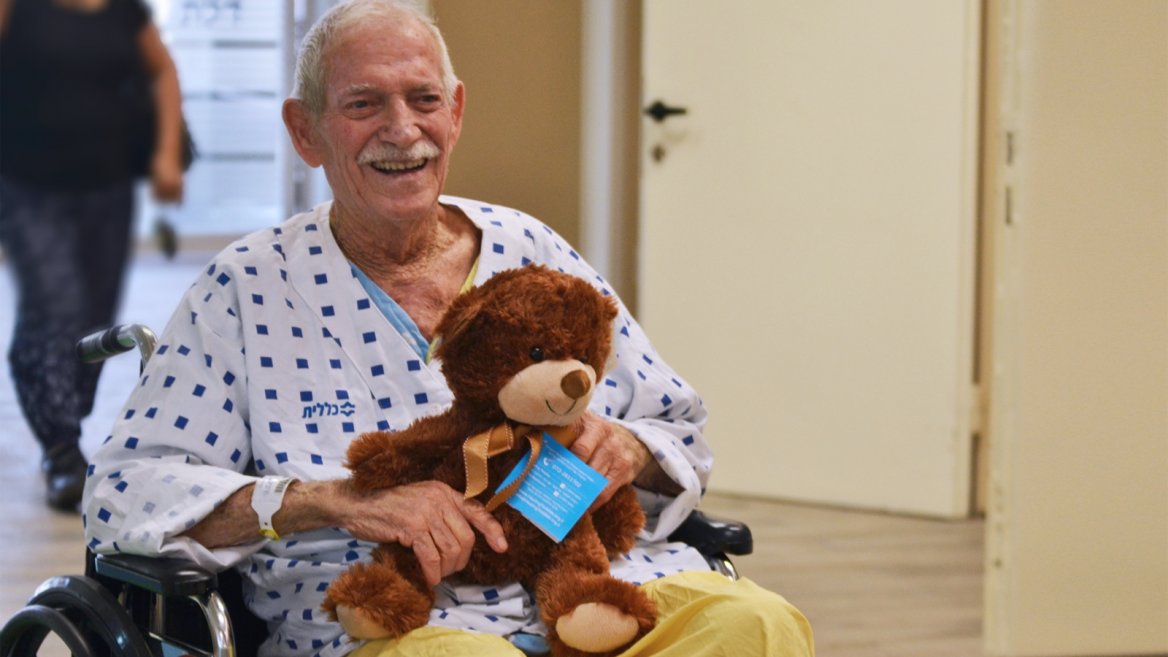 Most of the patients who receive Healing Teddies are adults. Photo by Shany Or

“I never thought I could get excited by hugging a teddy bear,” exclaims Ziva Nusinker, a 44-year-old Israeli mother of two who recently finished treatment for metastatic breast cancer.

Moments after the doctor explained that she will need regular checkups and medication for the rest of her life, a volunteer “angel” in the hospital brought Nusinker a special stuffed bear that comes with hugging instructions.

It was a gift from the nonprofit organization Healing Teddies (Dubonei Hachlama in Hebrew), a unique program now active in 27 Israeli hospitals.

Nusinker tells ISRAEL21c that hugging her bear at least three times a day, as per the instructions, has been life-changing. There’s nothing magical about the toy itself, she explains.

“Hugging the teddy reminds me to hug myself and to be thankful for my health, to stay positive and enjoy life. Without it, I would not be reminded three times a day to do that. I keep the teddy in my bed so I can hug it anytime of day or night. This gives me great strength.” 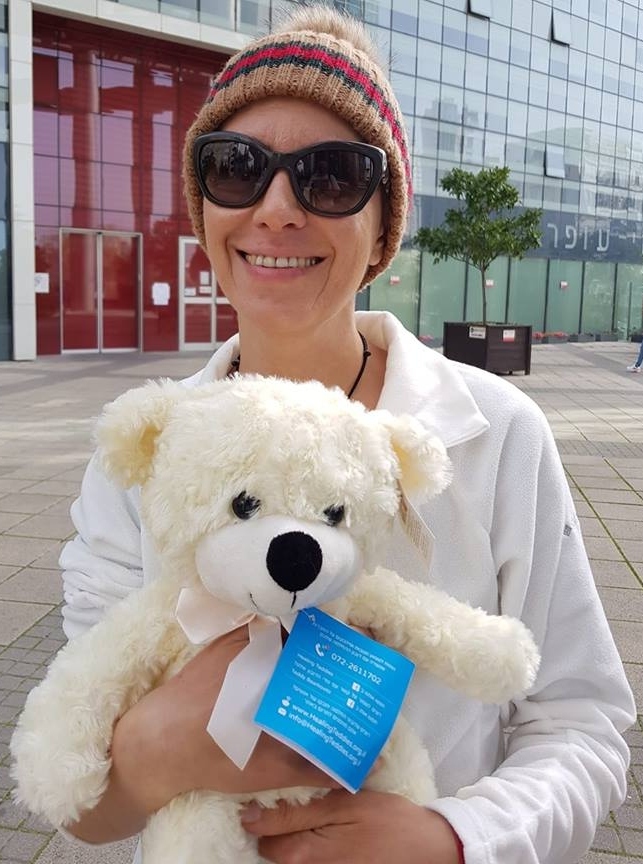 Healing Teddies has its roots in a fuzzy pink stuffed animal that 17-year-old Ilana Konstantinovsky gave her gravely ill mother in 2001. “I was so hopeful my mom would hug it, but she didn’t. And it broke my heart,” recalls the now 36-year-old Israeli woman.

Before Sophia Konstantinovsky passed away, however, she gave the bear back her daughter and told her to hug it close. Then, Ilana understood. “I realized she didn’t want to get too attached to anything in the last weeks of her life. She left it for us as a legacy, something to hold onto.”

Ilana Konstantinovsky has built that legacy into Healing Teddies. 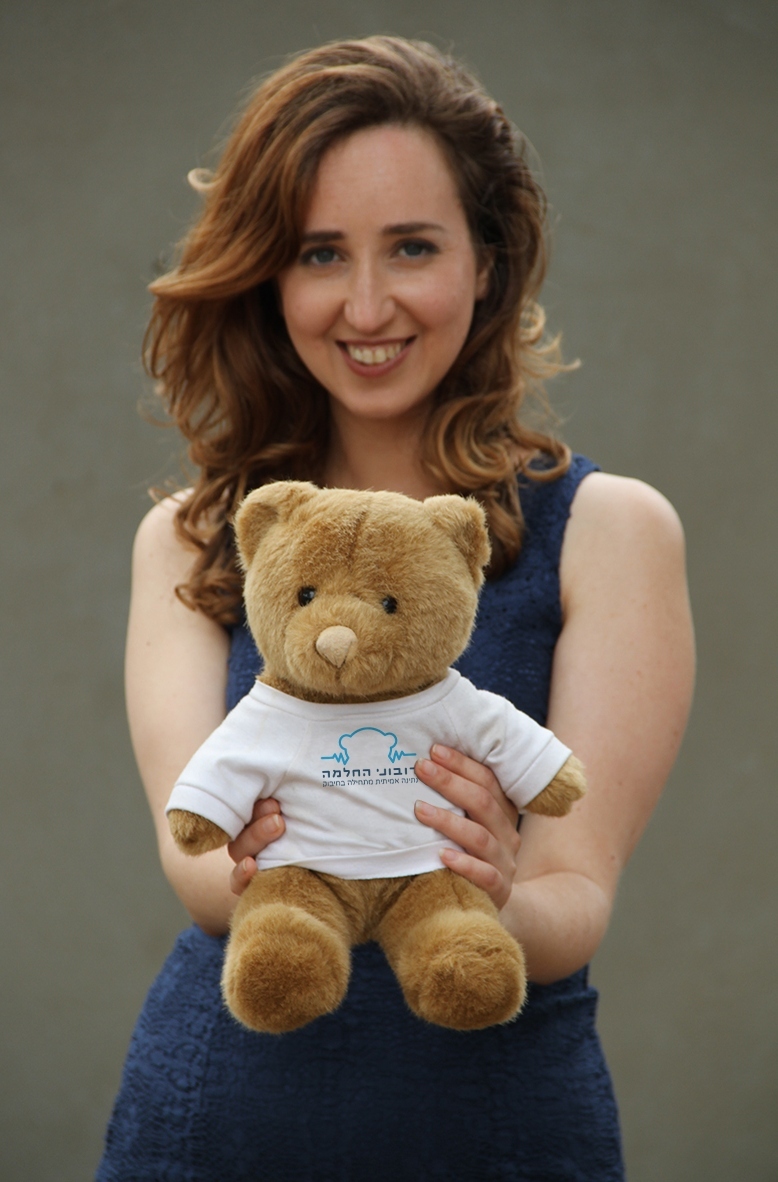 Since 2002, Healing Teddies has gifted about 37,000 teddy bears to cancer patients, trauma survivors and other hospital patients.

“It was a family project at first, just me and my father and some friends. Now it’s like an empire of hugs,” Konstantinovsky tells ISRAEL21c.

The official nonprofit organization was launched in 2006.

“The amazing thing is not that we give away teddies — other organizations do this, too — but the hugging instructions we include and the way that we give them.”

Research has proven the positive psychological effects of hugging. Healing Teddies, made for the organization in China, come with tags that explain how the stuffed animals can be emotionally therapeutic.

“I was just very aware because I come from a family of doctors — my father is a neurologist and now practices Chinese medicine. When my dad read the hugging instructions that I wrote when I was a teenager, he was surprised they were so accurate.”

The instructions recommend hugging the bear at least three times a day for 10 minutes to “activate” its ability to impart “warmth, support and love without conditions or limitations forever.” The traditional Jewish prayer for healing also appears on the tag. 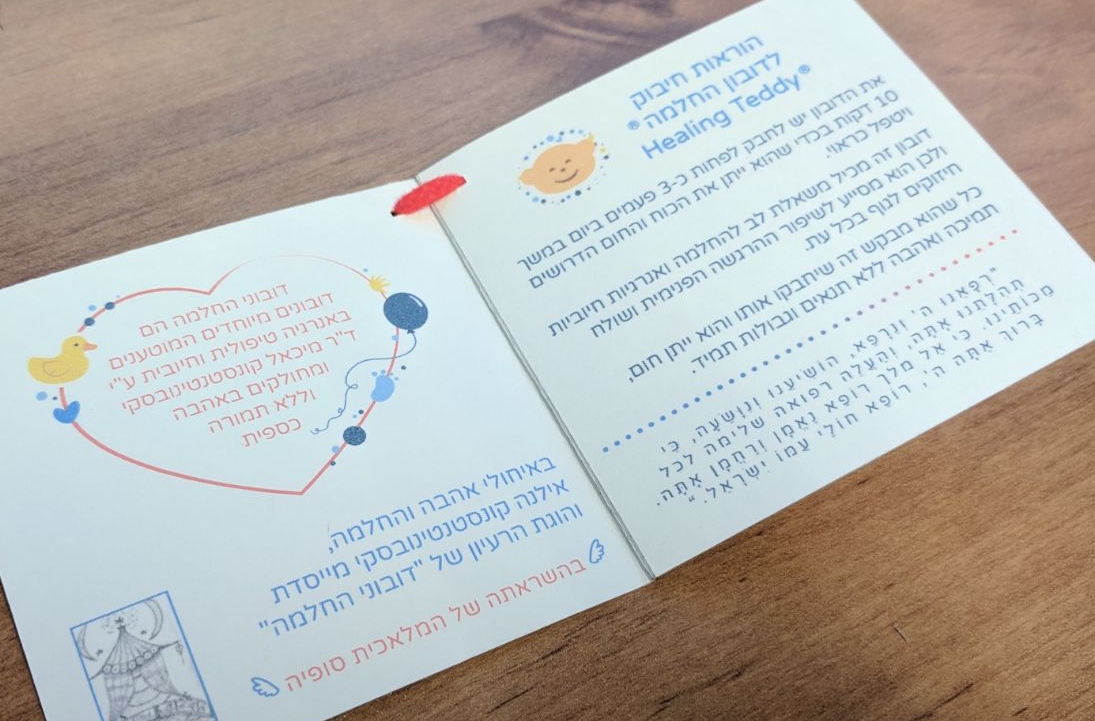 The bears are given to patients by trained volunteers like Malca Ben Moshe, who brought Nusinker her teddy.

“We have established a model for a planned activity where we have teams of ‘commandos’ — volunteers from corporations that donate to Healing Teddies – who come to the hospital and learn how to present them to patients so that the moment is very special. We don’t give them to people without this process, because otherwise patients would treat it as just another gift,” Konstantinovsky explains. 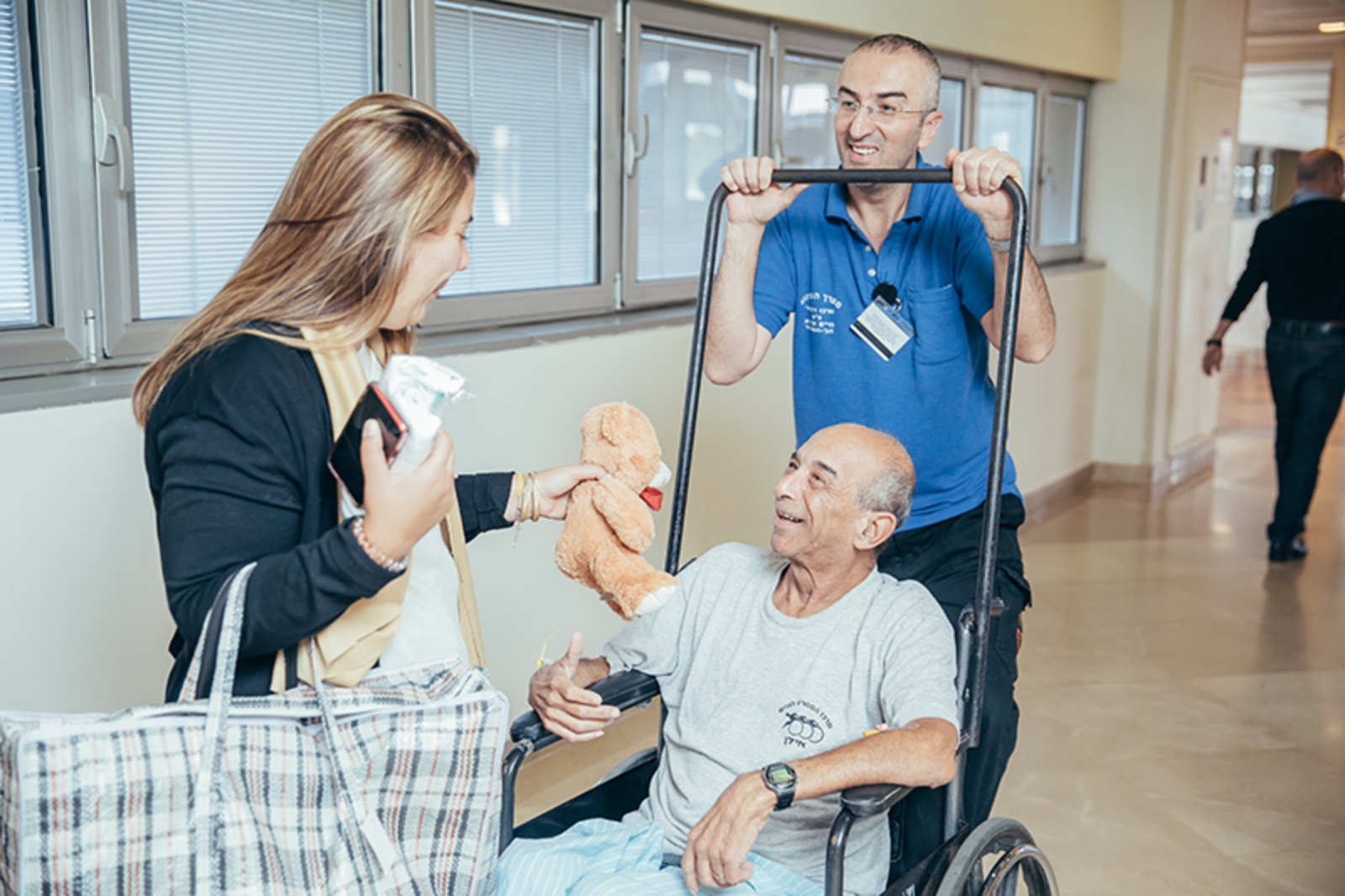 Not just for children

Some 80 percent of Healing Teddies recipients are aged 18 and over. “I think I’m the first person who turned teddy bears into a psychological tool for adults as well as children,” Konstantinovsky says.

In fact, she has found that the older the patient is, the more effective the Healing Teddy is.

“Older patients are often seeking a kind of comfort they had when they were young, or perhaps never had. We see the effect very fast and it’s more powerful than in a child.”

One of the first Healing Teddies she ever gave, in 2002, went to Ouriel Maoz, whose 18-year-old sister was one of 15 people killed in a terrorist attack in a Jerusalem pizzeria in 2001. Maoz still struggles with post-traumatic stress disorder.

“He sends me images of his Healing Teddy, Nuki, and tells me how Nuki helps him and hugs him and his family. His children love Nuki too,” says Konstantinovsky. 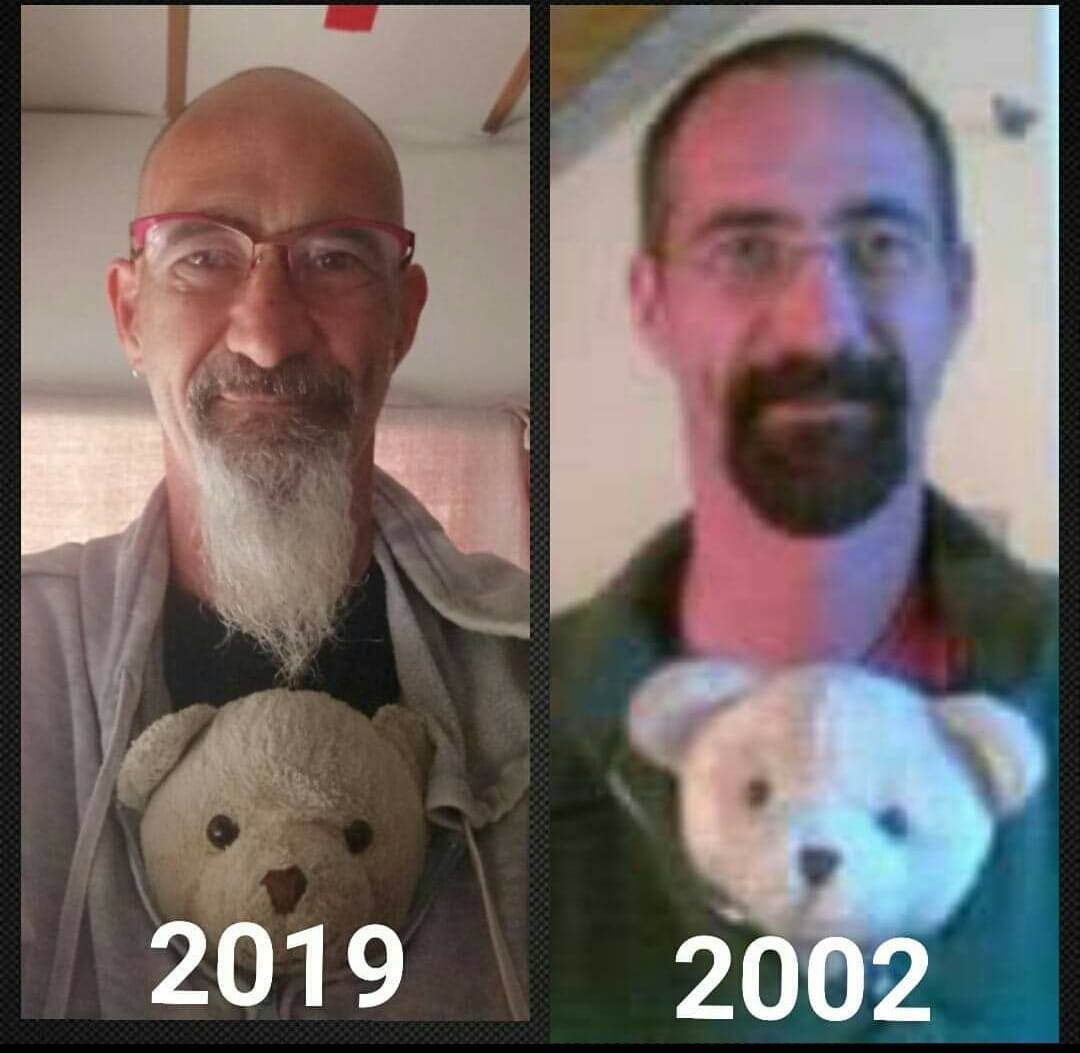 Ouriel Maoz with the Healing Teddy he received in 2002. Photo: courtesy

Back then, Konstantinovsky didn’t have the aid of social media to publicize her project and solicit donors. She posted notices on online forums. Among the Americans who responded generously was Robert, a Christian man from Tennessee. Konstantinovsky eventually met him and other early supporters on a trip to the United States.

Today, the project’s main corporate partners are Teva, Coca-Cola and Plasson. Private donors are still needed. Konstantinovsky launched a “Stop and Hug” crowdfunding campaign this year toward that purpose. 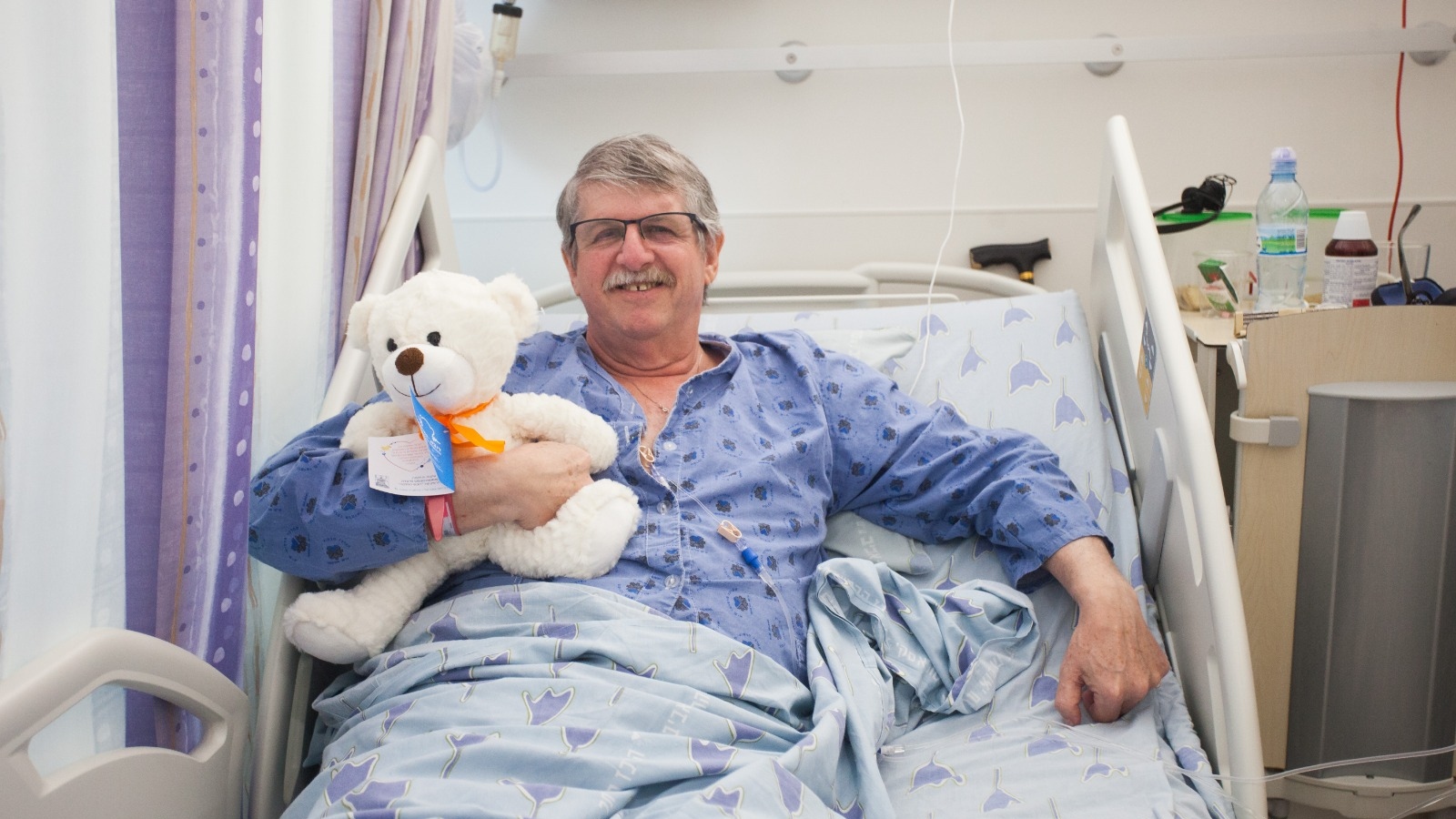 It’s important to note that only financial donations are accepted, not stuffed animals. Healing Teddies are packaged in accordance with strict hospital rules.

“We get requests from hospitals and from individuals who want us to give a teddy to a family member. We try to say yes to every request, but it depends on donations and how much stock we have,” says Konstantinovsky.

She runs Healing Teddies from her home in Ramat Gan in addition to running her own branding and advertising business.

While many of her friends went off to India to find themselves after military service, Konstantinovsky says she found her life’s meaning at home in Healing Teddies.

“Till this day it is so amazing for me to go to sleep knowing I made a difference in so many lives. And I want to make it bigger. We aim to reach 3,000 people per year and it all depends on donations.”

Konstantinovsky even has plans to expand the program to North America.