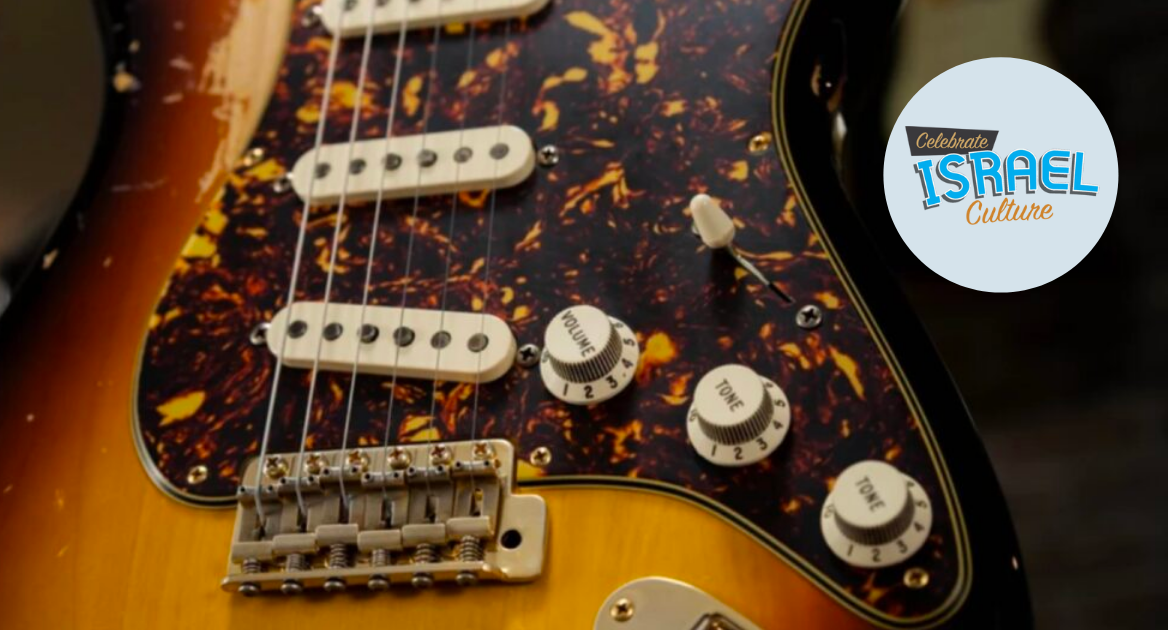 Tal Macmull didn’t wake up one morning and decide to build an award-winning, internationally acclaimed guitar. Instead, it was the steady realization of a childhood dream that got him there.

Macmull guitars are the handiwork of Tal Macmull and his childhood friend, Amit Sadras, who operate out of their workshop on the outskirts of Jerusalem.

The two already built their first guitar as teens but got into the field professionally around a decade ago. Since then, they’ve built some 400 guitars, all of them handmade, inhouse and absolutely boutique. 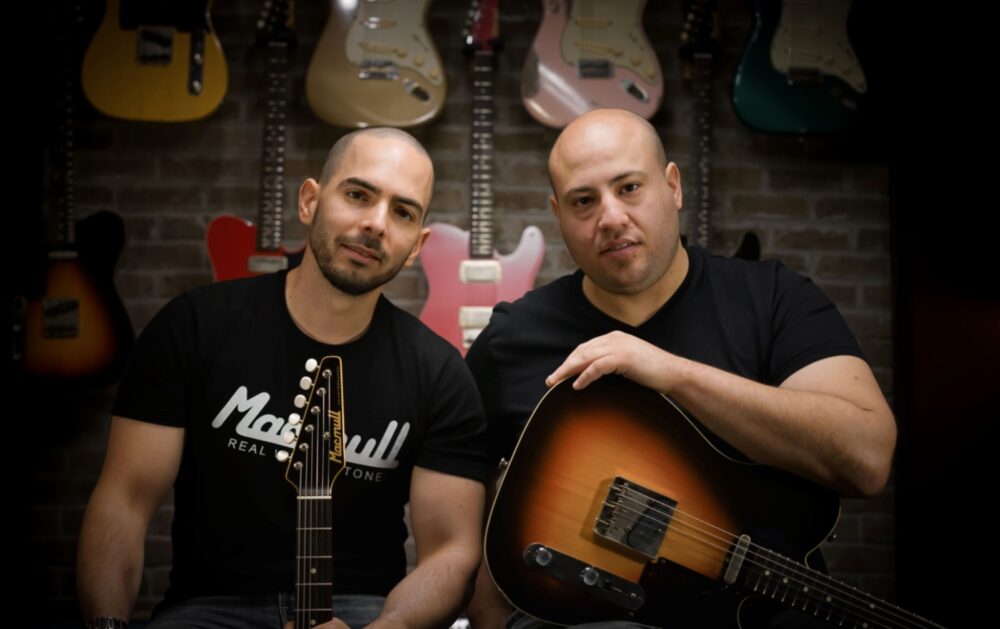 The partners learned their trade by trial and error.

“Guitars are such complex things because they’re not built only out of wood,” Macmull notes. “There are all sorts of things to do with paint, electronics. We do everything inhouse, and that’s what makes our guitars so good. We hardly do any outsourcing. At the moment we’re six workers, and we’re steadily but very seriously growing.” 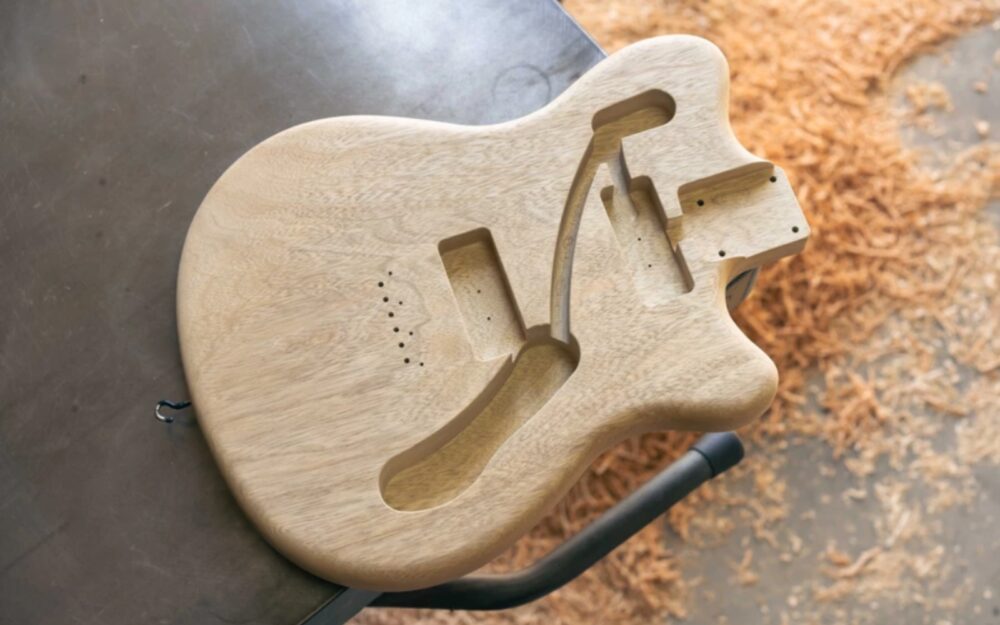 Macmull guitars are built inhouse, under strict supervision of the quality of materials and the production process. Photo by Amit Sadras

Overall, the Macmull team now builds around 130 guitars each year. They have five designs and within each of these create different color and electronic versions that get sent out to stores around the world or sold directly to private customers who order them online according to their specific color and hardware preferences. 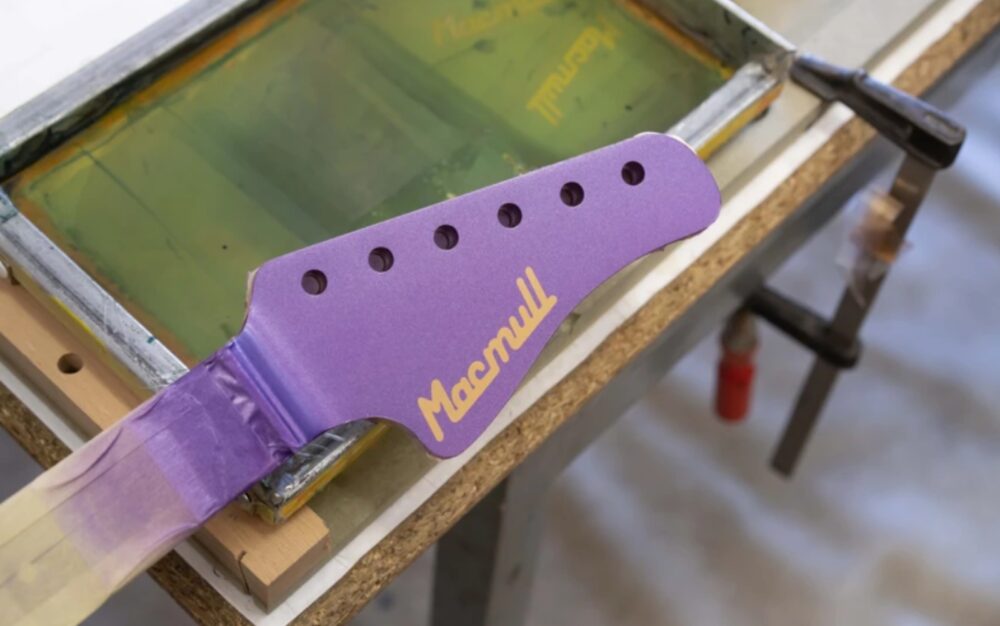 Macmull guitars can be shipped worldwide. Photo by Amit Sadras

What sets Macmull apart, according to its founder, is the attention to detail and striving for perfection.

“It’s not by chance that Amit and I didn’t expand,” Macmull says. “There’s something very strong between us regarding the issue of quality. We’re very meticulous and rigorous people. We’re also very, very strict about material quality; it’s quite extreme. Each of us has his own field that he leads in the best way possible.” 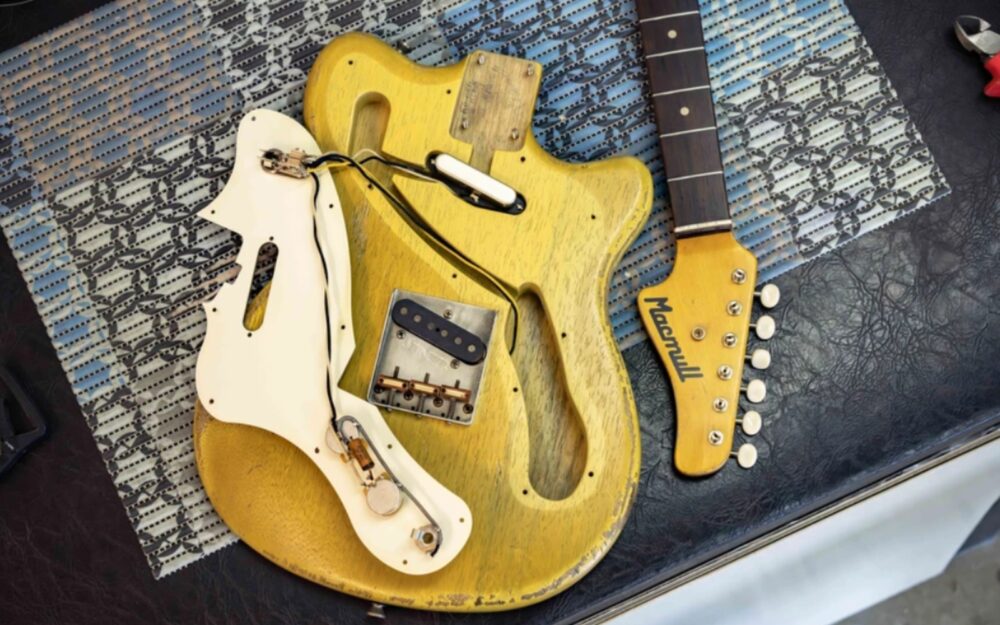 Macmull’s founders taught themselves everything, from electronics and hardware, to build their guitars from scratch. Photo by Amit Sadras

Their guitars, in case you were wondering, start at a retail price of $2,990. It’s this most affordable model that recently won the international award.

“Just because it’s more affordable doesn’t mean that it’s any less good,” Macmull explains. “We worked on this model for years, but it stayed backstage,” he says.

“And then during Covid we suddenly had some time, and we gave it our all. We created for the first time a model that is really all ours – we took all the experience that we’ve accumulated and put it into one instrument.” 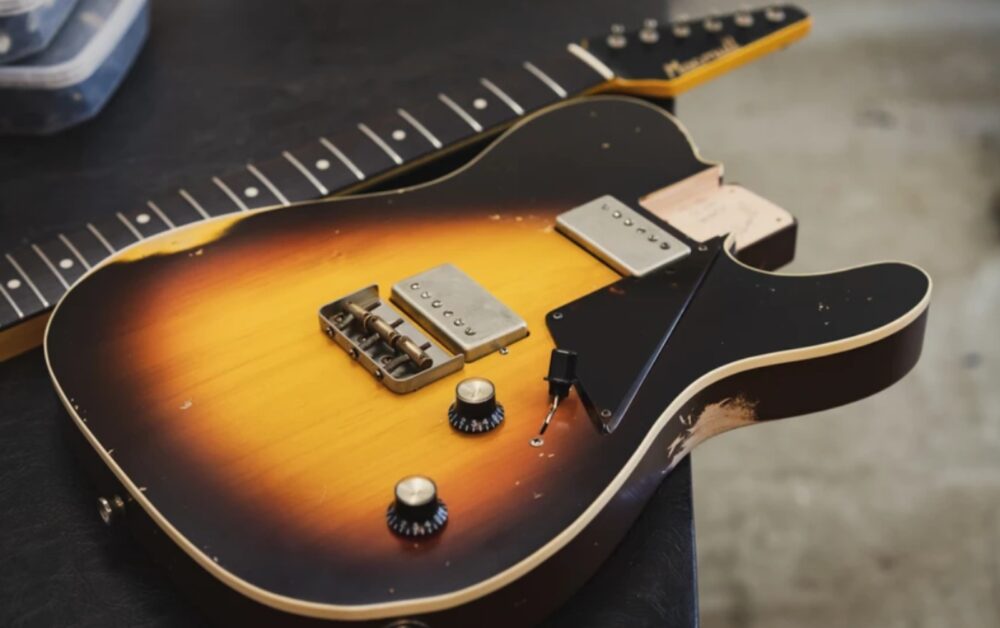 Macmull has five guitar designs, each of which can be further customized in terms of color or hardware. Photo by Amit Sadras

“It’s all about taking very high-quality material and knowing how to treat it properly and not add too many things. It’s about simplicity. It’s an amazing instrument and it proved it by winning against guitars that cost $15,000.”

Almost all their customers have more than one Macmull guitar, Macmull notes.

“Most guitarists have three to four guitars, in the same way that chefs have all sorts of knives. Usually, when someone gets one of our models, they realize that they can no longer play anything else. They get so excited that they purchase another one and then another one, until all of their collection becomes Macmull, one by one.”

Macmull’s famous Israeli clients include celebrated guitarists and singers such as Idan Amedi and Yehuda Poliker, and international ones such as guitarist and producer John Shanks and guitarist Pete Thorn.

“There’s also our ‘god,’ Mike Campbell, who played with Tom Petty until he died and who now plays with Fleetwood Mac,” Macmull notes. “He was our biggest dream and we’ve achieved it, but there’s still a long list ahead, starting off with [Bob] Dylan.” 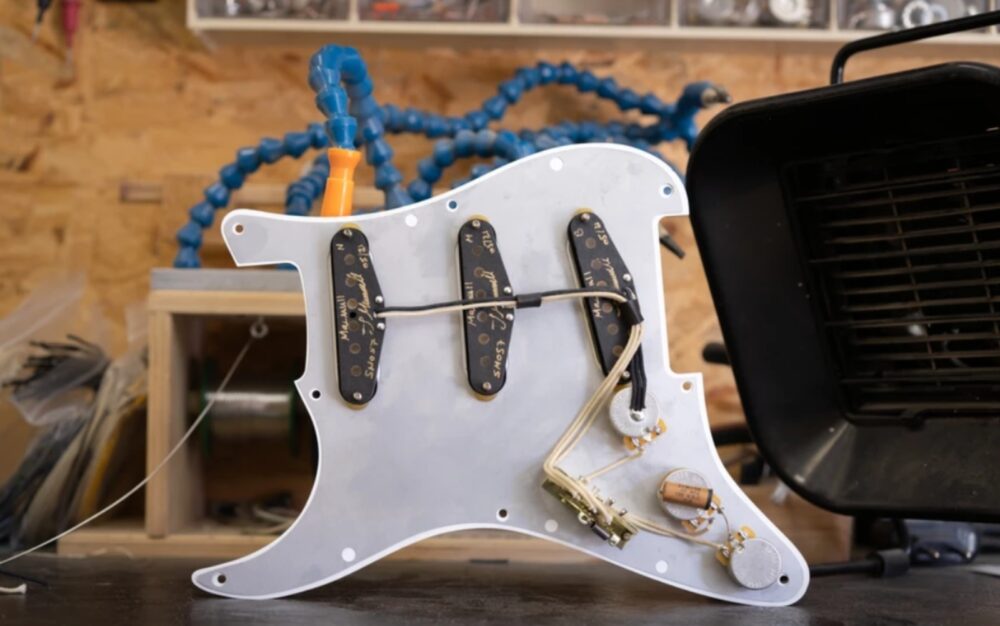 Something so much better

Macmull says that entering the boutique guitar market is no easy feat, especially when you’re an outsider from Israel and the guitar-making scene is American.

“The competition is very stiff,” he notes. “If you decide to enter a field that’s already been invented elsewhere, you need to make sure you’re a few levels above,” he explains.

“In order to make it, you need to keep on developing more and more and to succeed in making something that’s so much better.” 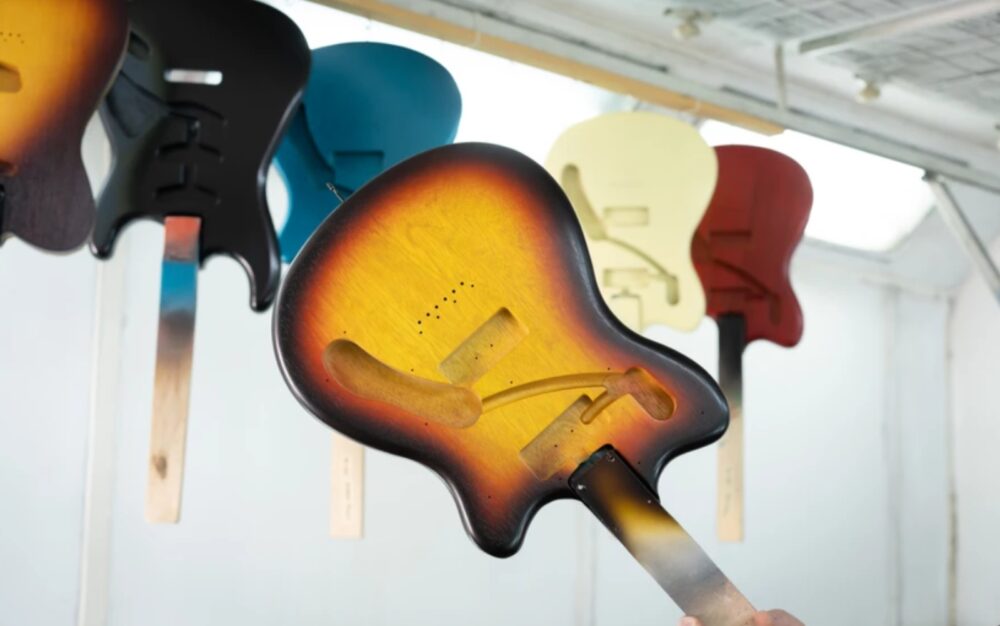 Macmull plans on growing steadily but not turning commercial. Photo by Amit Sadras

Looking forward, Macmull plans on growing steadily without losing the intimacy and connection of its owners to each of the guitars.

“Most people who start making a certain number of guitars want to make many more of them, and to have a big factory. That’s something that I also want, but I don’t want it to turn commercial. The goal isn’t to become a multibillionaire. We’re doing this out of passion,” he says.

“Everything is still exciting for us, from the quality of the wood to the piece coming together and the first stringing. It’s amazing each time anew,” he concludes.

UNCOVER ISRAEL - Get the ISRAEL21c
Weekly Edition free by email
Sign Up Now!
Bring Israel's story to life.
Millions of people around the world rely on us to gain a deeper understanding of Israel. We are the trusted source for original content you won't find anywhere else.
You can make a difference. Donate today to support journalism that brings Israel’s story alive.
SUPPORT ISRAEL21c
Read more on:   Culture, Israeli musicians, Macmull Guitars