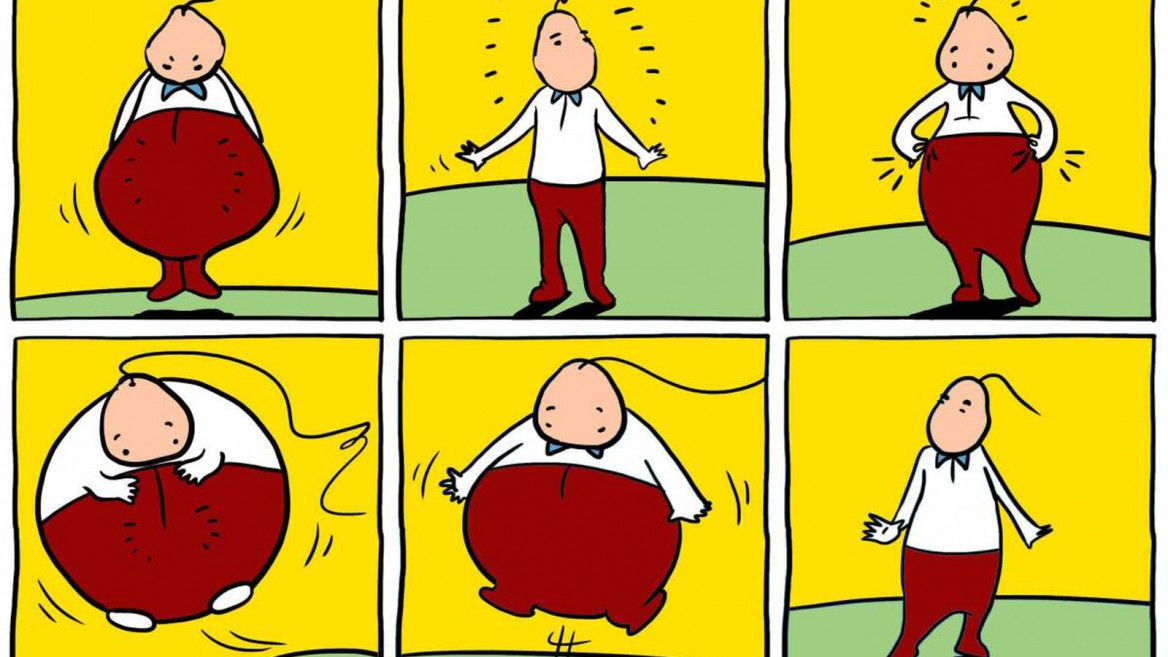 The phenomenon of weight cycling is the repeated loss and regain of body weight. Illustration via Weizmann Institute of Science

Dieters know all too well that losing weight doesn’t mean it’s gone for good. And research has shown that the phenomenon of weight cycling – the repeated loss and regain of body weight – can be bad for our health, upping the risk of developing adult-onset diabetes, fatty liver and other obesity-related diseases.

As reported today in Nature, researchers at the Weizmann Institute of Science say that by altering the composition or function of the intestinal microbes – collectively termed the gut microbiome — the common weight cycling phenomenon, also known as yoyo obesity, may in the future be prevented.

The study was performed by research teams headed by Dr. Eran Elinav of the Immunology Department and Prof. Eran Segal of the Computer Science and Applied Mathematics Department. The researchers found that after a cycle of gaining and losing weight, all the mice’s body systems fully reverted to normal – except the microbiome.

Moreover, they found that for about six months after losing weight, post-obese mice retained an abnormal “obese” microbiome.

“We’ve shown in obese mice that following successful dieting and weight loss, the microbiome retains a ‘memory’ of previous obesity,” said Elinav. “This persistent microbiome accelerated the regaining of weight when the mice were put back on a high-calorie diet or ate regular food in excessive amounts.”

“By conducting a detailed functional analysis of the microbiome, we’ve developed potential therapeutic approaches to alleviating its impact on weight regain,” said Segal.

The study was led by Christoph Thaiss, a Ph.D. student in Elinav’s lab. Thaiss collaborated with master’s student Shlomik Itav of the Elinav lab, Daphna Rothschild, a Ph.D. student of Segal’s lab, as well as with other scientists from Weizmann, the Hebrew University of Jerusalem and Tel Aviv Sourasky Medical Center.

In a series of experiments, the scientists demonstrated that the makeup of the “obese” microbiome was a major driver of accelerated post-dieting weight gain.

For example, when the researchers depleted the intestinal microbes in mice by giving them broad-spectrum antibiotics, the exaggerated post-diet weight gain was eliminated.

In another experiment, when intestinal microbes from mice with a history of obesity were introduced into germ-free mice (which carry no microbiome of their own), their weight gain was accelerated upon feeding with a high-calorie diet, compared to germ-free mice that had received an implant of intestinal microbes from mice with no history of weight gain.

Next, the scientists developed a machine-learning algorithm, based on hundreds of individualized microbiome parameters, which successfully and accurately predicted the rate of weight regain in each mouse, based on the characteristics of its microbiome after weight gain and successful dieting.

The scientists combined genomic and metabolic approaches and were able to identify two molecules driving the impact of the microbiome on regaining weight. These molecules – belonging to the class of organic chemicals called flavonoids that are obtained through eating certain vegetables – are rapidly degraded by the “post-dieting” microbiome.

The study shows that the levels of these flavonoids in post-dieting mice were significantly lower than those in mice with no history of obesity.

The researchers found that under normal circumstances, these two flavonoids promote energy outflow during fat metabolism. Low levels of these flavonoids in weight cycling prevented this fat-derived energy release, causing the post-dieting mice to accumulate extra fat when they were returned to a high-calorie diet.

In the study, they implanted formerly obese mice with gut microbes from mice that had never been obese. Amazingly, this fecal microbiome transplantation erased the “memory” of obesity in these mice when they were re-exposed to a high-calorie diet, preventing excessive recurrent obesity.

The scientists also supplemented post-dieting mice with flavonoids added to their drinking water. This brought their flavonoid levels, and thus their energy expenditure, back to normal levels. As a result, even on return to a high-calorie diet, the mice did not experience accelerated weight gain.

“We call this approach ‘post-biotic’ intervention. In contrast to probiotics, which introduce helpful microbes into the intestines, we are not introducing the microbes themselves but substances affected by the microbiome, which might prove to be more safe and effective,” Segal said.

The scientists believe their study can offer an important answer to the obesity problem the world over.

“Obesity affects nearly half of the world’s adult population, and predisposes people to common life-risking complications such as adult-onset diabetes and heart disease,” said Elinav. “If the results of our mouse studies are found to be applicable to humans, they may help diagnose and treat recurrent obesity, and this, in turn, may help alleviate the obesity epidemic.”