Remember at the beginning of the pandemic when everyone was wiping down their groceries, pulling out the veggies one by one to clean them with alcogel?

We know better by now – Covid-19 is rarely transmitted by surfaces – but the panic that accompanied the early days of the crisis gave a boost to AgwaFarm, a startup based in the Bar-Lev high-tech park in Israel’s Upper Galilee.

AgwaFarm combined that awareness with the fear of an unknown pathogen to push its climate-friendly solution: “Don’t go shopping for fresh vegetables. Grow them in your own home.”

Cultivating veggies in the kitchen is not new. “Anyone can buy a hydroponic platform to use at home. They can buy seeds and all the material they need to do home farming,” Wallach explains. “But what makes people fail and fail again is a lack of knowledge and a lack of time to tend to the vegetables.”

Hydroponic farming – where the vegetables sit in a nutrient solution rather than soil, usually in a greenhouse – is “precision farming,” Wallach adds. “You need to be very accurate.”

AgwaFarm’s flagship product, the AgwaGarden, is an all-in-one box that allows consumers without nary a green thumb to plant, nurture and harvest hydroponic vegetables with almost no effort. 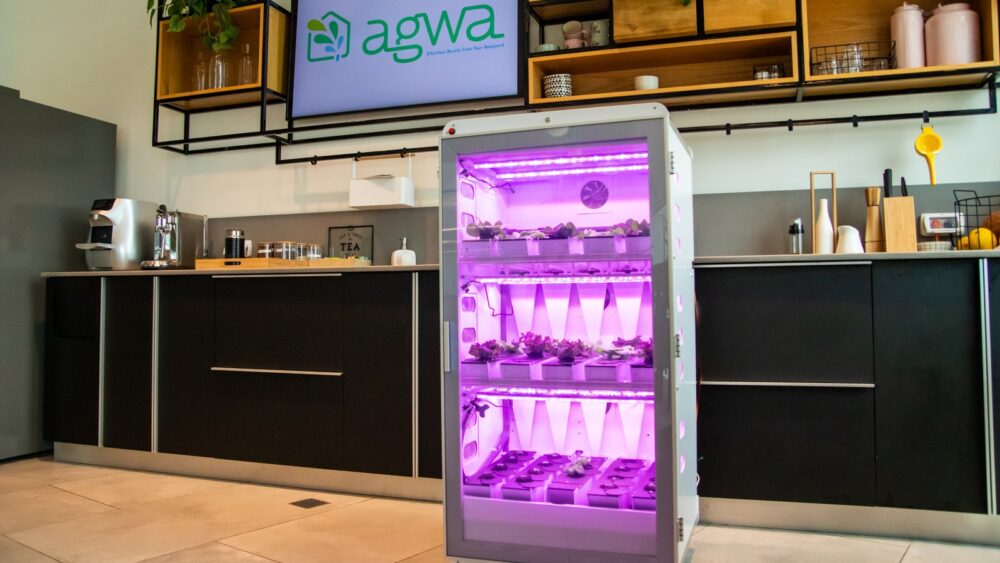 The AgwaGarden is about the size of a wine refrigerator. Photo courtesy of AgwaFarm

The unit comes with 59 “slots” into which you insert a dried seed pod. There are pods for dozens of vegetables – tomatoes, lettuce, cucumbers, arugula – plus some surprises (yum, strawberries!).

Wallach claims a standard AgwaGarden can output enough salad fixings for a small family three to four times a week.

The unit is about the size of a small wine refrigerator and sports a clear glass front. In addition to the slots for seed pods, there is an opening for adding water and another for adding fertilizer every six months or so.

You don’t need to monitor the plants or the temperature, pH, light and humidity in the box. AgwaFarms’ artificial intelligence software does all that for you, dispensing the right amount of nutrients at the right time.

The AgwaGarden unit is decked out with LEDs, high-resolution cameras and sensors that are connected via WiFi to an app on the customer’s mobile device. If there is a problem (One of the pods not germinating? Time to replace a pod with a fresh one?) the app sends an alert. 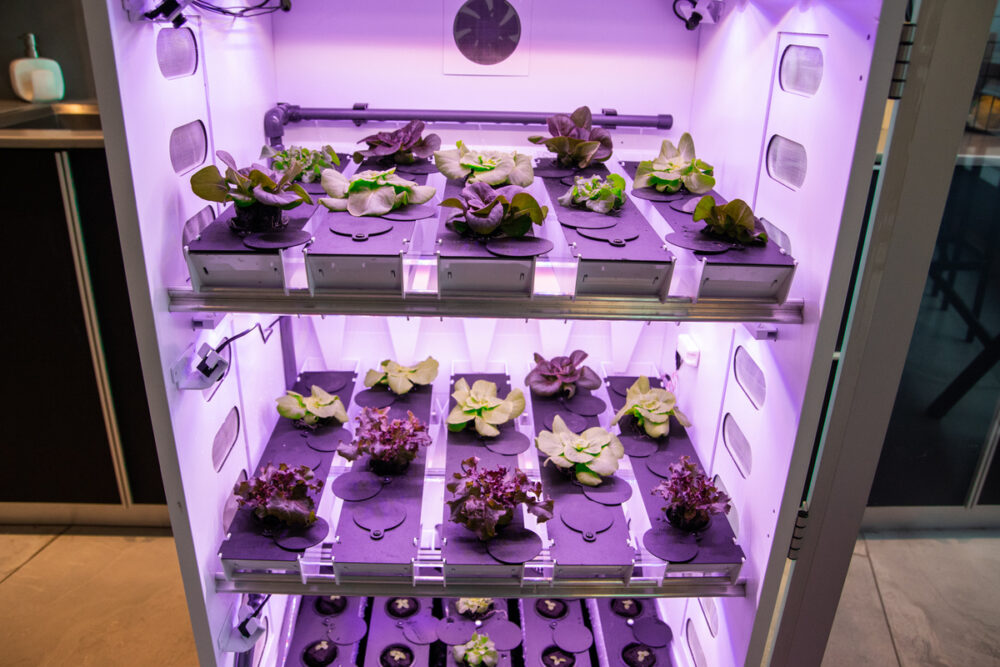 Perhaps most important, the app will ping you when a crop is ready for picking. No more guesswork – the app will tell you, “Pod 3 in row 2 is ripe and ready for harvesting.”

In that respect, “We call it more of an appliance or a food processor,” Wallach notes. “It’s not your typical gardening experience.”

The AgwaGarden unit will cost in the vicinity of $1,000 although pricing hasn’t been finalized. Consumers will pay a subscription fee of around $30 per month to receive a new batch of seed pods (you can choose what you want) and unlimited technical support. Free fertilizer is included, too.

No pesticides or plastic

AgwaFarm-grown vegetables require no pesticides. There’s no need for plastic packaging or for gas-guzzling trucks to bring the veggies to a distribution point. And the vegetables don’t lose nutrients on the way from the farm to the supermarket.

“This is true farm-to-table,” Wallach notes.

The result is vegetables that “taste much more robust,” Wallach says. “They’re really flavorful. Arugula has more nuttiness and a bit of spiciness in it. I told my wife, ‘Until now, when we bought arugula, we were eating something green with a green taste. Using this platform, we’re actually eating arugula!’”

Wallach, an agronomist trained at the Hebrew University’s Faculty of Plant Science in Rehovot, says the data collected by the AgwaGarden unit is used to improve AgwaFarm’s database of plants.

That is how AgwaFarm can make decisions about a crop’s needs based on information from the cameras and sensors. “It’s an endless loop making the product better and better,” Wallach says.

It was a match

Wallach explains that “Agwa” is a combination of agriculture and water and sounds like “aqua” – water in Spanish. 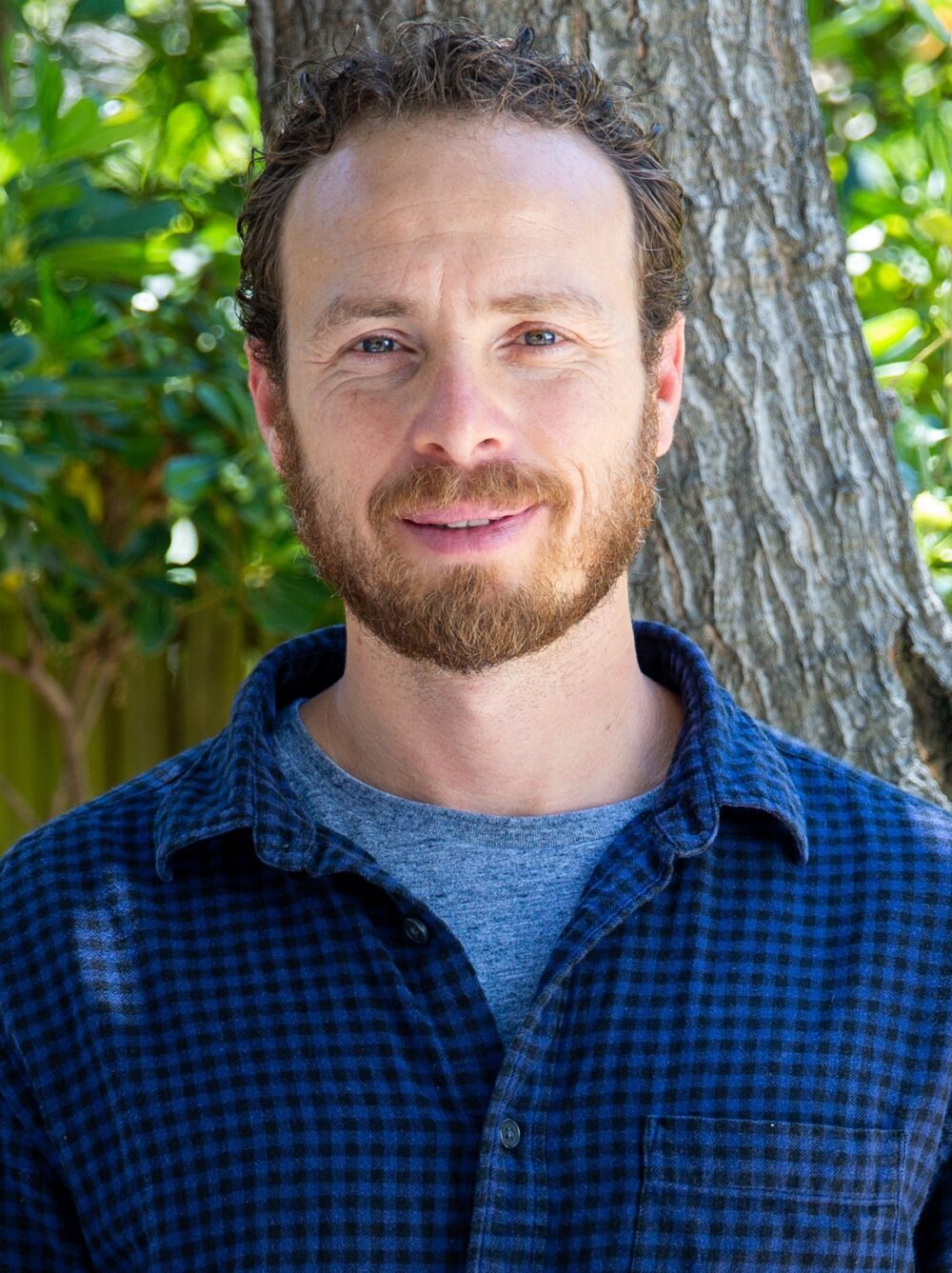 He came up with the idea for the company while he was living in Tel Aviv. He then moved to Berkeley, California, for four years while his wife earned a master’s degree in fine arts. While there he was introduced to Niv Stolarski, who would become AgwaFarm’s CTO.

Only problem: Stolarski was in Israel.

“I bought him a plane ticket to the US, and we went trekking for about a week in the Big Sur area, talking about what could be the product, our abilities, our working philosophy. We understood it was a match.”

AgwaFarm began with an outdoor product, a 6-by-6-foot greenhouse that can hold up to 100 seed pods. But Wallach feels that the indoor AgwaGarden could make the bigger impact.

AgwaFarm is running pilot tests in Israel, aiming to take AgwaGarden to the United States in June 2022 (“Probably to the Bay Area first, where people are considered early adopters,” Wallach says) with commercial sales hoped for by early 2023.

The units are currently being built in Israel but, as the company expands its reach, Wallach expects manufacturing will move closer to the target markets.

AgwaFarm’s most direct competition is the US startup Gardyn, which has a similar AI- and app-driven product. An Israeli firm, Hydi.io, has also developed an all-in-one home growing unit.