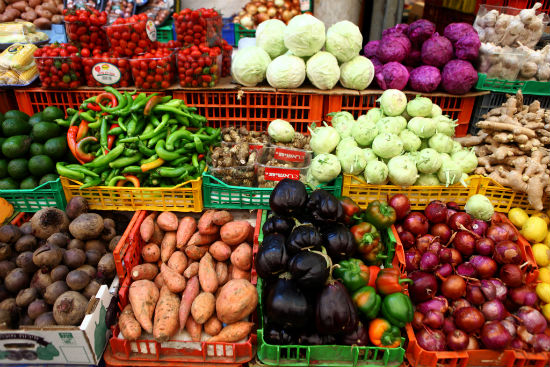 If busloads of Tel Avivians and hordes of European backpackers are hiring guides to take them through the shops and stalls of Jerusalem’s Machane Yehuda outdoor market, you know something hip must be happening here.

The shuk, as it’s better known, is Israel’s latest hot spot for culinary tourism. The mix of exotic produce, spices and juices (tamarind drink, anyone?), Mediterranean fish, readymade delicacies and rare cheeses — many of them sold by descendants of original vendors from a hodgepodge of countries — makes for a colorful sensory experience.

“We found ourselves looking for something with added value to do in Jerusalem,” says Reuven Pilo, a former chef who founded More Gastronomy and Tourism with his wife, Mor.

“Many tourist companies bring visitors to museums, archeological parks, the Kotel [Western Wall] — but they don’t bring them to the people of Jerusalem,” Mor tells ISRAEL21c. 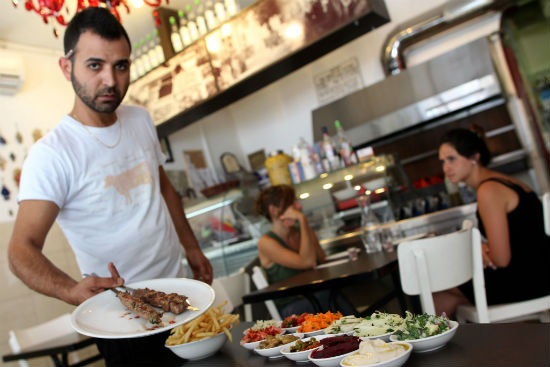 Photo by Nati Shohat/Flash90
Visitors come to Machane Yehuda to enjoy the wide variety of foods.

The Pilos teamed up with Michael Weiss of the GoJerusalem Internet tourism portal to get many of the shuk’s vendors to share their stories online for the first time and to offer a menu of market tours.

“The shop owners love it — it’s rebranding the market in a more sophisticated way,” Pilo says.

Some of the touring options are focused, for example on wine and cheese or on bakeries, while others begin with a shopping trip led by a professional chef and end with a cooking workshop. 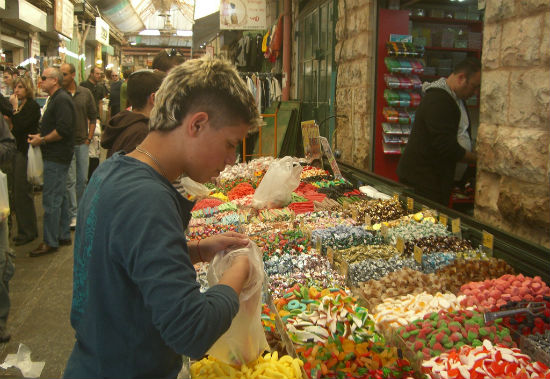 Photo courtesy of Abraham Hostel
Stocking up on sweets at Machane Yehuda.

Alternatively, you can tour at your own pace with a 99-shekel Shuk Bites ticket, which comes with a map and vouchers for a variety of products – everything from organic tehina to spicy s’chug, artisanal breads to plant-based remedies concocted by Yemenite medicine man Uzi-Eli.

While Jerusalem has plenty of supermarkets, for many shoppers nothing can match the authenticity and diversity of downtown Machane Yehuda, which opened in 1928.

“My father, he’s 72 and two times a week he goes on the bus to the [light rail] with his cart to the market,” says Pilo. “He buys the fruits and vegetables on Mondays, the fish and meat on Thursdays. But it’s not just the traditionalists. It is beginning to be chic to shop in Machane Yehuda.”

It’s gotten easier to do so in the past five or six years, thanks to merchant leader Eli Mizrahi working with the municipality to invest in improved lighting and walkways, security cameras and all-weather awnings in addition to art installations and musical events.

“The shuk became a big magnet for those coming to Jerusalem from abroad and from other areas in Israel just to see the market,” says Weiss.

This fertile ground for world cuisine sparked the imagination of graphic designer Ruth Yudekovitz, who launched Shuk and Cook tours of Machane Yehuda about five years ago.

“It’s more of a treasure hunt than a tour,” she explains. After providing a brief history of Machane Yehuda and preparing them for the multilingual atmosphere where Arabs and Jews shop side by side, she divides participants into groups of two or three.

“I give them each a cart, a shopping list, a map and money,” Yudekovitz tells ISRAEL21c. “I give them little challenges on the way, like identifying what game is being played in the corner of the Iraqi [sector of the] shuk.” (If you’ve been there, you’ll know the answer is backgammon, or sheshbesh.)

With their finds, they create a feast in her specially renovated home kitchen.

“I like to emphasize the idea of the plenty of the land,” says Yudekovitz. “I introduce them to things less familiar, like kohlrabi and mangold. Instead of stuffed grape leaves, we might make stuffed mangold leaves with cranberries or red rice. It’s a somewhat traditional Middle Eastern menu with a modern slant.”

Put some burekas in your backpack

Established just blocks from Machane Yehuda in 2010, the Abraham Hostel recently started offering its mostly young, European guests — and other interested tourists — a Market Cooking Tour on Sundays and Thursdays.

A guide takes participants around the stalls, guiding purchases of ingredients that they take back to the hostel kitchen for a hands-on lesson in cooking a traditional, vegetarian Middle Eastern meal. Items typically include kubbeh (Moroccan meat dumplings), majadara (a rice and lentil dish), tabbouleh (bulgur and mint salad) and babaganoush (eggplant salad), accompanied by some local arak, an anise liqueur.

“It was always a dream of mine to have such an experience in the shuk,” says Gal Mor, 34, Abraham Hostel’s co-founder and an experienced tour director.

Mor says the shopkeepers get a long-term benefit from the tour. “Our customers go back again and buy groceries and hang out in the eateries of the market. It’s part of our social agenda to promote local businesses.”

Pilo agrees. “We have great feedback from the stores,” he says. “Even if only two or three people come into the halva store from these tours, they will buy something.” Halva is a sesame-based nougat treat beloved throughout the Middle East and North Africa. “They don’t have anything like it in Haifa or wherever they come from.”

Haifa does have an outdoor farmers market, as does Tel Aviv. But Israelis from these areas are increasingly eager to explore Jerusalem’s shuk with tour companies taking them by bus from Tel Aviv.

“In Tel Aviv and in Haifa you have markets, but you buy your fruits and vegetables there and that’s it,” says Rubin Tours’ Igor Drapkin. “In Machane Yehuda, there’s a lot of different stuff in one place, including wine and cheese, all handmade. You taste this and that, you buy this and that – it’s like going to the market in Marrakesh, only it’s an hour’s drive away in Jerusalem.”