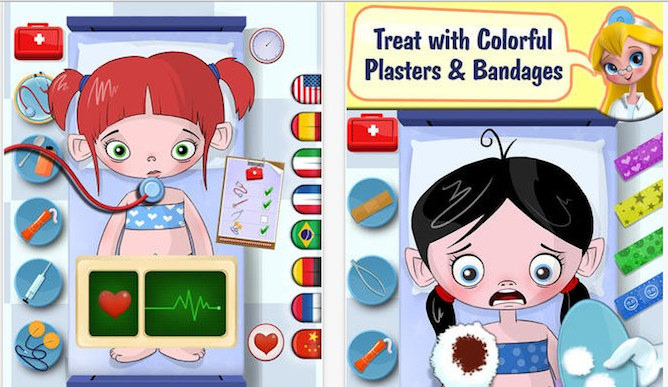 File this one under “strange but true”: Santa’s Rescue Saga, the No. 1 free Christmas iOS application in 2013, comes from the Israeli team at TabTale.

And here is another unusual fact about this fast-growing Tel Aviv-based startup: Among 25 million monthly active users of TabTale apps are many young fans in Saudi Arabia.

The company releases one or two new titles every week, and aims to release 16 per month by the end of 2014, according to cofounder and CEO Sagi Schliesser, the father of eight- and 12-year-old daughters.

“To keep kids interested, you need to evolve all the time,” Schliesser tells ISRAEL21c. “They always want something new, and we want to give them the ability to choose.”

Paint Sparkles, billed as a child’s first coloring book, is the most popular individual TabTale game so far, with 10 million downloads. The Baby series – with titles such as Baby Dream House, Baby Doctor and Baby Fashion Designer – has gotten 40 million downloads.

No wonder TabTale – launched in 2010 with a single storybook app – has raised $13.5 million, led by a $12 million expansion investment by Magma Venture Partners and Qualcomm Venture Partners last October. In January, the Israeli headquarters moved into new digs housing 100 employees in Tel Aviv. Satellite offices and studios have opened in Macedonia, Ukraine and Bulgaria, and US West Coast.

Underlying the feverish pace of development is a proprietary platform devised by TabTale’s founders, who also include Vice President Oran Kushnir and Chief Technology Officer Nir Bejerano. Schliesser explains that many other app-makers base their products on diverse fragments of code, making changes difficult.

“We are updating everything in our portfolio and providing new titles all on the existing platform. We’ve integrated the platform with the whole lifecycle of the app, from development and design to marketing and analytics, so we can easily fine-tune the template. It’s very unique.”

The founding trio is not a fresh-out-of-university phenomenon. Each is over 35 and came to TabTale from successful careers in high-tech companies such as Tecnomatix, Sapiens and Radware.

“Oran and I were looking into innovating research on breakthrough reading technologies,” says Schliesser. “We knew the ebook market, and Oran had designed games for Israeli carriers, so we understood the challenge of creating a mobile gaming platform — a smooth platform that would allow for a big portfolio. We decided to go after this vision with interactive books, and we knew it would evolve.”

Though casual games overtook books as the company’s initial focus, TabTale remains one of the world’s main players in informal education apps with its catalogue of classic children’s stories and interactive learning experiences for iPhone, iPad and Android devices. In January, TabTale started rereleasing book apps for ages 2-6 with the help of a dedicated studio in Bulgaria.

Schliesser says the founders are all fathers. “Part of what made building our business so much fun was having our kids participate in reviewing the apps. Their tips in some cases led to the success of some apps, so we are grateful for the very good beta testing we get at home.”

TabTale apps are mainly in English and can support Western Europe languages, Russian, Portuguese, Chinese and Hebrew, with more to come.

Apps for older users are another significant direction for 2014, says Schliesser. Some already available in this category include the Doctor X series and the Crazy Chef series, and a bunch of new mobile content for users aged 13 and older will be released under the Crazy Labs publishing brand.

The company began turning a profit at the end of 2012. “We built it as a sustainable business,” says Schliesser. “We have a fine economic bottom line and plan on keeping that so we can build a big business, or maybe someone will buy it. Right now, we are looking to build.”

Considering this is a business he bootstrapped by selling his house, TabTale has succeeded beyond Schliesser’s modest dreams.

“You always hope for the best and prepare for the worst, and this exceeded our best expectations,” he says. “The results speak for themselves.”

UNCOVER ISRAEL - Get the ISRAEL21c
Weekly Edition free by email
Sign Up Now!
Bring Israel's story to life.
Millions of people around the world rely on us to gain a deeper understanding of Israel. We are the trusted source for original content you won't find anywhere else.
You can make a difference. Donate today to support journalism that brings Israel’s story alive.
SUPPORT ISRAEL21c
Read more on:   sagi schliesser, oran kushnir, nir bejerano, tabtable, Technology, Mobile, Entertainment, Culture, Israeli apps, israeli startups