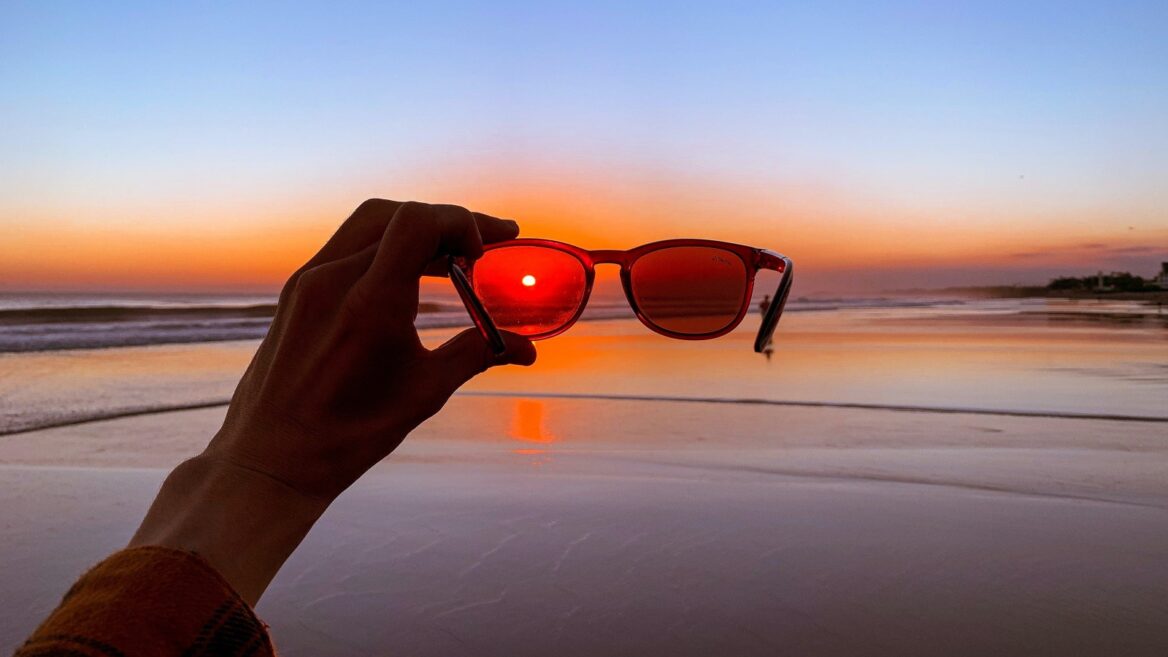 Photo by Sergey Chuprin on Unsplash

“Slide your finger here on the side of the frame,” Alex Alon is telling me.

I’m sitting in the “Bistro” – not some trendy Tel Aviv café but a room set up for demonstrations in the offices of DeepOptics, where Alon is the chief scientist.

DeepOptics has developed a proprietary lens technology that seamlessly switches between far and near vision by reorienting the pixels in the glass.

So, when I run my finger over the touch-sensitive side of the thick black sunglasses frame and I look through the Bistro’s window, I can clearly see the building across the parking lot.

Another swipe and the distant scene blurs. I am magically able to read a page on Alon’s Kindle.

I swipe my finger back and forth, gleefully swapping close for distance and back again. For this long-time wearer of progressive (multifocal) lenses, DeepOptics’ 32°N-branded sunglasses are nothing short of an addictive, adaptive miracle.

Unlike when I wear progressive lenses, there’s no distortion with the 32°Ns. Moreover, rather than being limited to a small strip where I can see clearly for reading (tilting my head uncomfortably to look down), with DeepOptics the entire lens is available and clear.

The price is also nice: just $250 for a pair. When I buy new progressive lenses, the cost in Israel can easily top $1,200. DeepOptics’ sunglasses can be preordered (at a discount) as part of a Kickstarter campaign; shipping is expected in about 10 months. 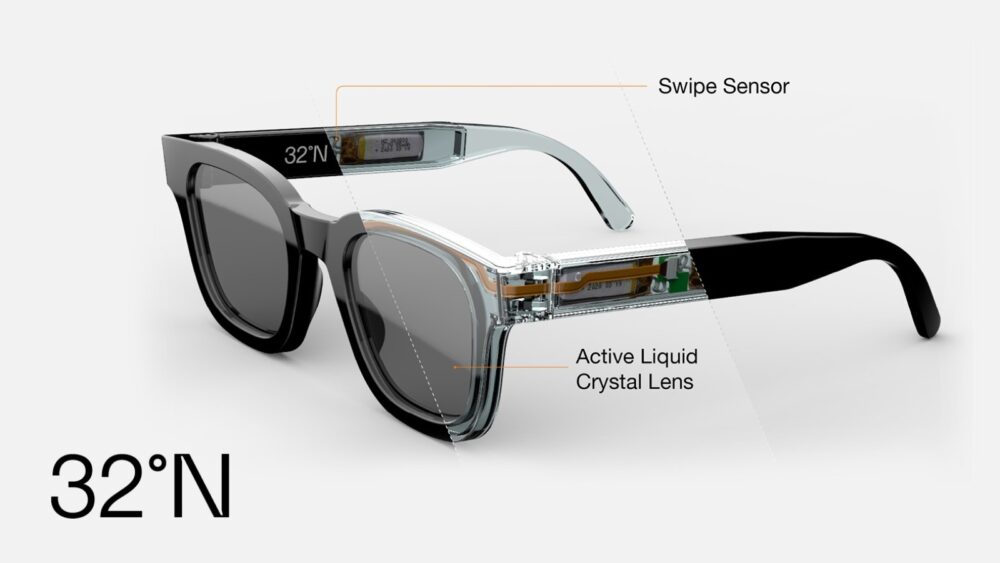 DeepOptics sunglasses feature liquid crystal layers that are split into tiny pixels, capable of rotation at every point of the pixel.

When the wearer swipes, a tiny processor embedded in the temple calculates the user’s personal prescription and commands millions of tiny pixels inside the lens to change their electrical state to bring close objects into focus. 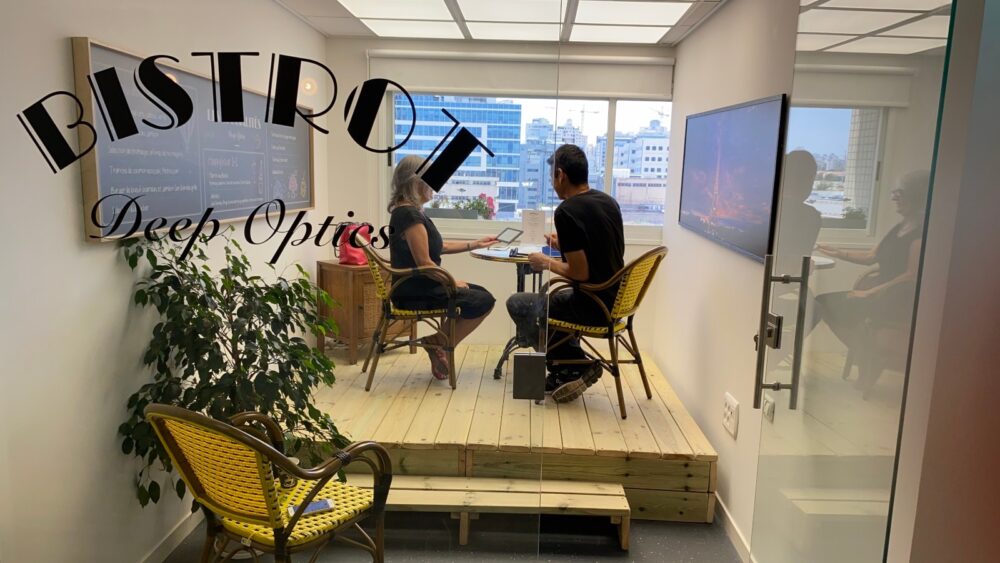 There are no moving parts and no extra weight. The tiny rechargeable battery should last a full day. If the battery runs out, the lenses default to the “plano” (uncorrected) setting, so you can still use them for distance.

DeepOptics is starting with sunglasses because of the frustrations people over 45 have with presbyopia – a natural part of aging that causes eyes to lose the ability to change focus easily. It affects some 1.8 billion people and is the main reason middle-aged people may suddenly need reading glasses.

For such people, sunglasses pose a problem. When you want to look at your mobile phone, you have to take your sunglasses off. Given that the average person looks at their phone up to 58 times a day, the hassle factor is not insignificant.

Following the presumed successful launch of DeepOptics’ sunglasses, two more products are in the pipeline: A pair of glasses with separate prescriptions for distance and close (the version being sold on Kickstarter will have plano for distance) and one that works for all kinds of frames, not just sunglasses.

The latter won’t be ready for another couple of years, DeepOptics CEO Yariv Haddad tells ISRAEL21c. These glasses will have a built-in eye tracker so that users won’t have to swipe to change to reading mode and back again. The software will “see” where you’re looking and rotate the pixels accordingly.

DeepOptics launched 10 years ago with the aim of creating glasses that would work with 3D TVs. The market for such TVs never really took off. But utilizing the same technology for vision correction “was a much bigger and more valid opportunity,” Haddad realized.

Dynamically adjustable lenses have been “the Holy Grail of glasses,” Haddad says.

Only a few companies have tried so far. One firm, PixelOptics, went bankrupt. Its Japanese partner, TouchFocus, bought the technology and sells its own version of software-adaptable lenses – for $3,000 a pair.

Why so much? The Japanese-made glasses have to be custom coded to an individual’s eyesight. Compare that with DeepOptics which sells an off-the-shelf product that’s the same for everyone when you take it out of the box.

Using software also means that, as one’s eyes deteriorate further over time (sorry, another “side effect” of aging), users don’t have to buy a new pair of spectacles. They can simply dial up the new prescription on the DeepOptics’ iPhone or Android app, which connects to the glasses via standard Bluetooth.

There is some setup required to get the prescription right, but it’s one and done. You can even share a pair of 32°Ns with another person; DeepOptics’ mobile phone software can have multiple users. In the future, the glasses will recognize the phone in closest proximity and choose the correct profile without any user intervention.

Before the Apple drops

DeepOptics was founded by Haddad, Alon and a third executive, Yoav Yadin, who is the company’s CTO. Serial entrepreneur and investor Saar Wilf was an early backer of the company and was actually the one to come up with the idea. He reached out to Haddad and the others to create what would become DeepOptics. 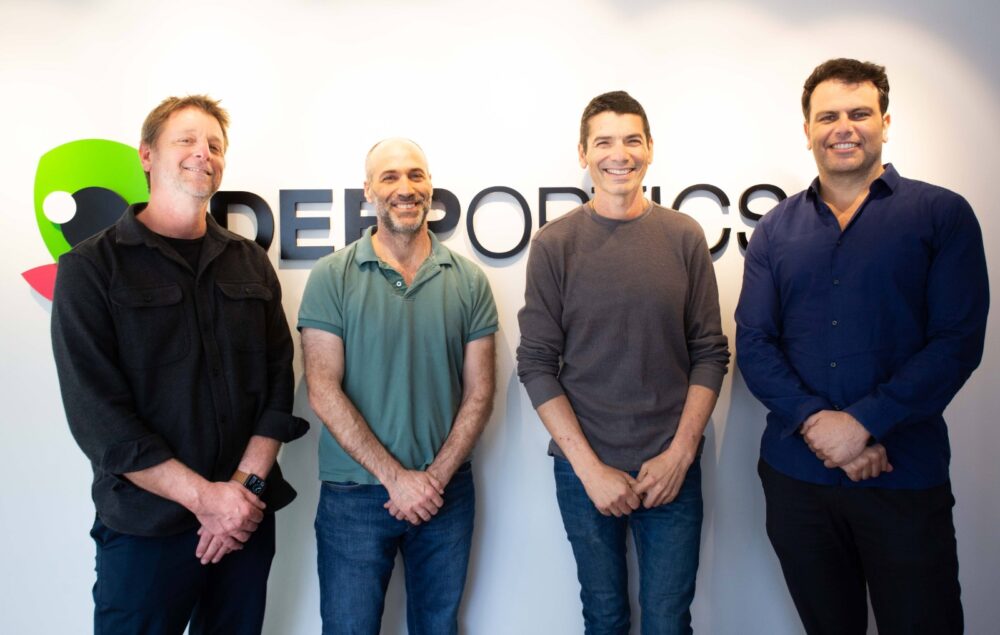 Haddad and Yadin had both worked in Alon’s previous startup, Dblur, which developed a software lens technology for mobile phone cameras, security systems and medical devices.

“Dealing with human vision was a new thing for us,” Haddad admits.

DeepOptics, which employs 15 in its Petah Tikva headquarters, has backing from Samsung Ventures and international eyewear conglomerate Essilor International. Dan Katzman, former CTO of Israel-based Shamir Optics, is an adviser to the company. Essilor acquired 50 percent of Shamir in 2011.

DeepOptics’ current business model is to sell direct to the public, although that doesn’t exclude possible business-to-business partnerships with players with deep pockets.

Players such as Apple.

Apple is widely rumored to be working on smart AR glasses as its next killer product. “Apple will be dominant in this market,” Haddad believes. “And they’ll need to give you a prescription.”

Is Haddad worried about Apple? “Yes, but that means we’re in a good place,” he says.

Haddad suggests that DeepOptics product will hit the market long before Apple’s does.

My time in the Bistro was coming to a close. I took off the demo frames and reluctantly returned to my old-school glasses. I had one more question for Haddad, though: What’s up with the name?

32°N, it turns out, refers to the latitude of Israel (as well as some of the world’s most weather-friendly spots, including San Diego and Casablanca). “This latitude means it’s sunny. All the cities at 32°N are sunny. And we make sunglasses.”

For more information about how DeepOptics may change the way you see, click here

You can find out more about DeepOptics Kickstarter campaign here.