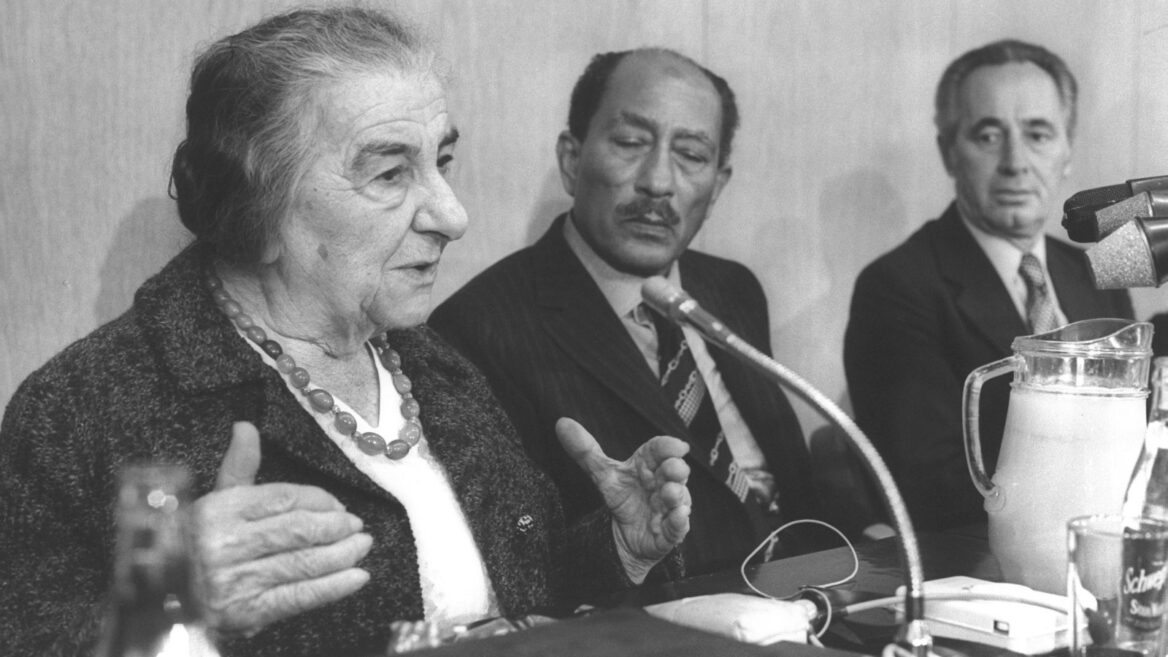 Golda Meir speaking at the historic visit of Egyptian President Anwar Sadat (center) on November 21, 1977, with Shimon Peres to the right. Photo by Ya’acov Sa’ar/GPO

If state-subsidized daycare is still a distant dream in most countries, it was a truly radical idea in the 1930s, when few mothers worked outside the home.

Yet that was when this social service was pioneered in Palestine. Jewish women needed safe and affordable childcare as they worked alongside their husbands to build what would become the state of Israel.

One of those women was Golda Meir.

Decades before serving as Israel’s fourth, and only female, prime minister (from 1969 to 1974), Meir was a member of the Women Workers Council and in the 1950s became Minister of Labor. 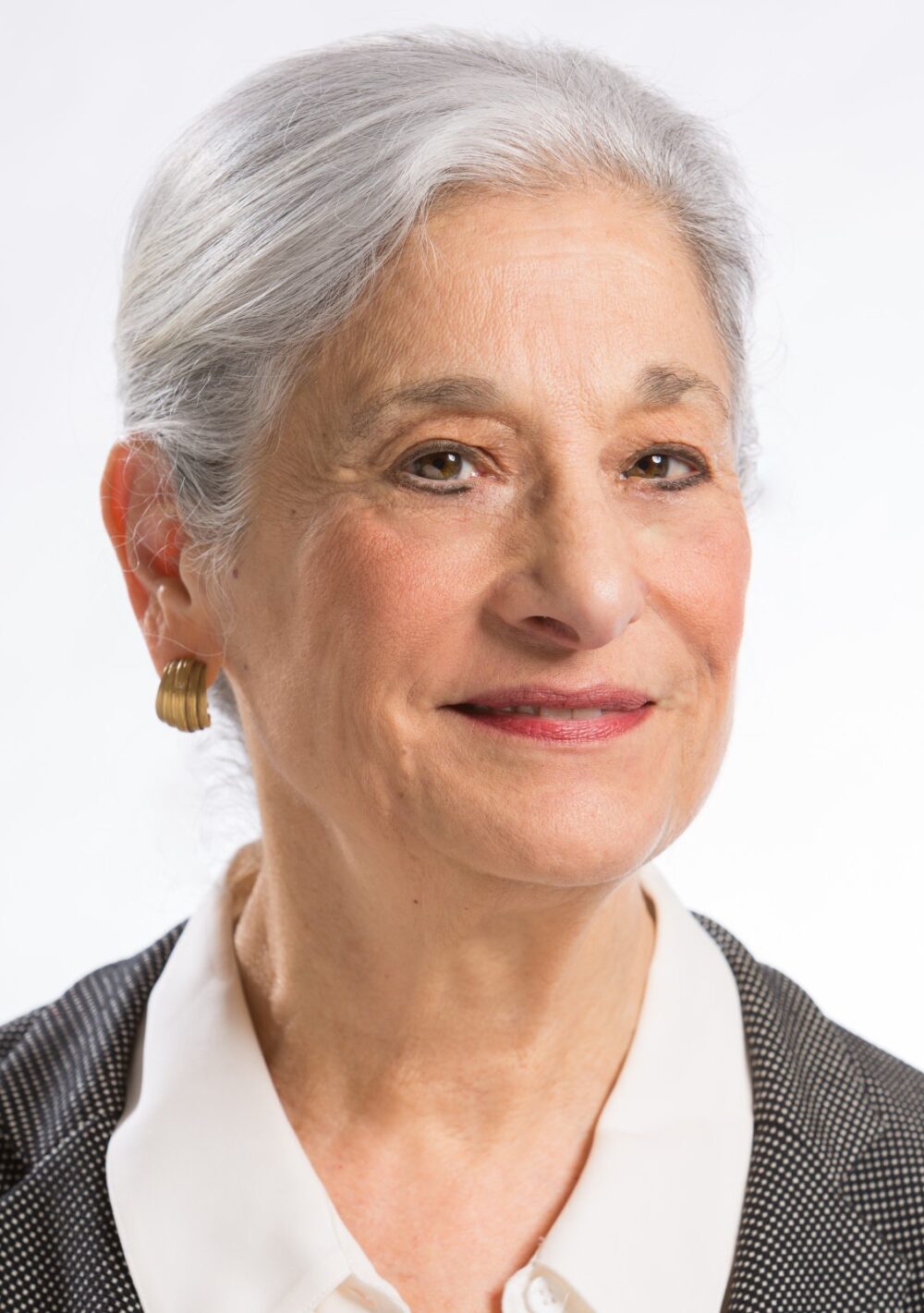 Based on years of research, Lahav’s book, The Only Woman in the Room: Golda Meir and Her Path to Power, will be released on September 6 by Princeton University Press.

The book is described as a feminist biography, reexamining Meir’s life through the lens of gender.

One of the guys

Although Meir legislated maternity leave in 1954 (“It was her gift to Israeli women,” says Lahav) she never declared herself a feminist.

Rather, Meir rose to power by accepting the patriarchal political structure.

David Ben-Gurion famously described the non-glamorous Meir as “the only man in the cabinet,” from which Lahav derived her title. 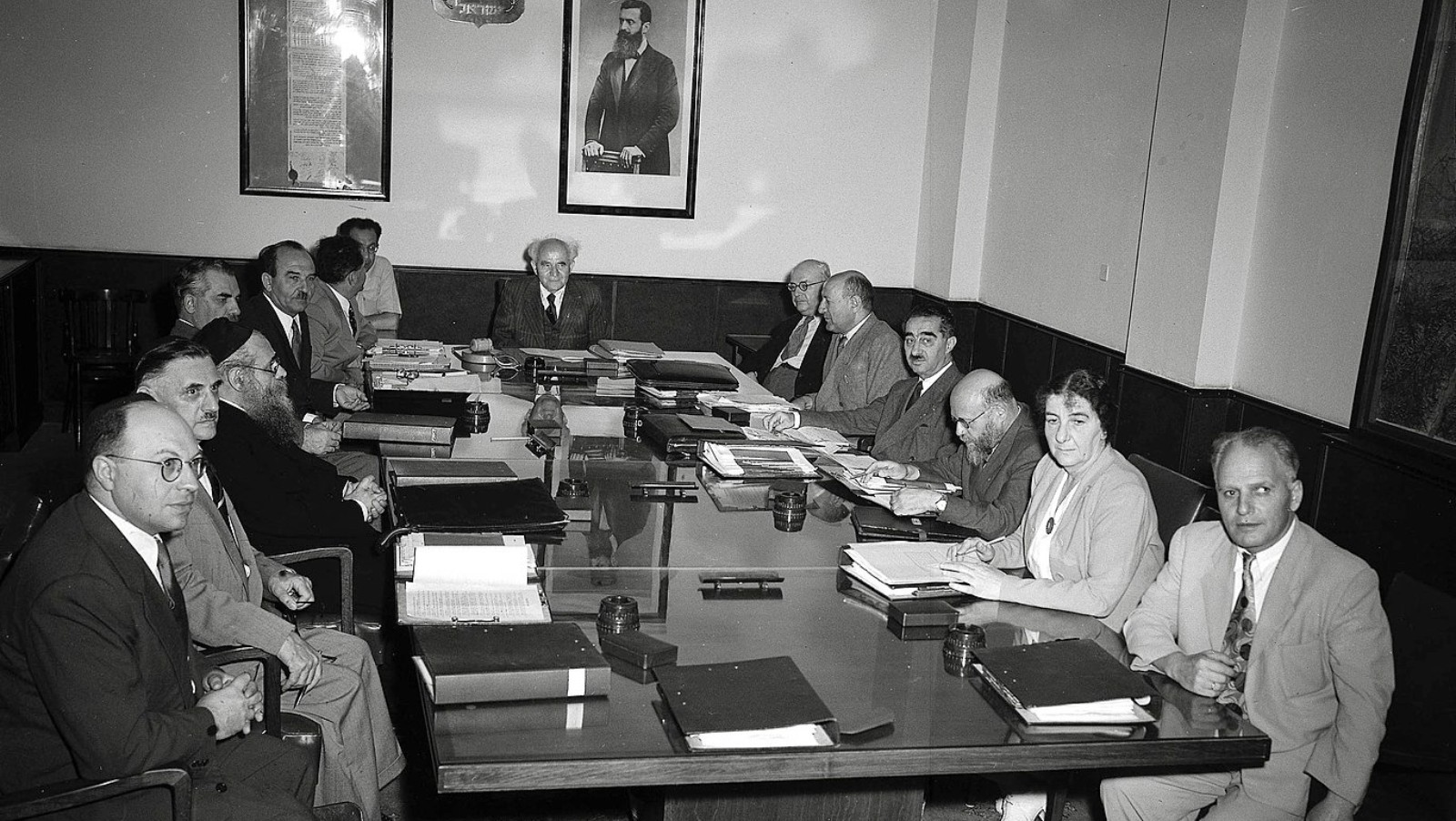 Golda Meir was the only woman at the first session of Israel’s third government, 1951. Photo by David Eldan/GPO National Photo Collection of Israel, via Wikimedia Commons

Being part of the old boys’ network allowed Meir to break a glass ceiling. But that glass was thick with misogyny, and she did not emerge unscathed.

“As Golda later reflected, ‘to be successful, a woman has to be much more capable than a man. … When a woman does not want only to give birth, to raise children … when a woman also wants to work, to be somebody … well, it’s hard. Hard. Hard.’

“Succeeding in such a culture was an uphill battle, one that affected her developing selfhood and informed her choice of strategies for survival,” Lahav writes. 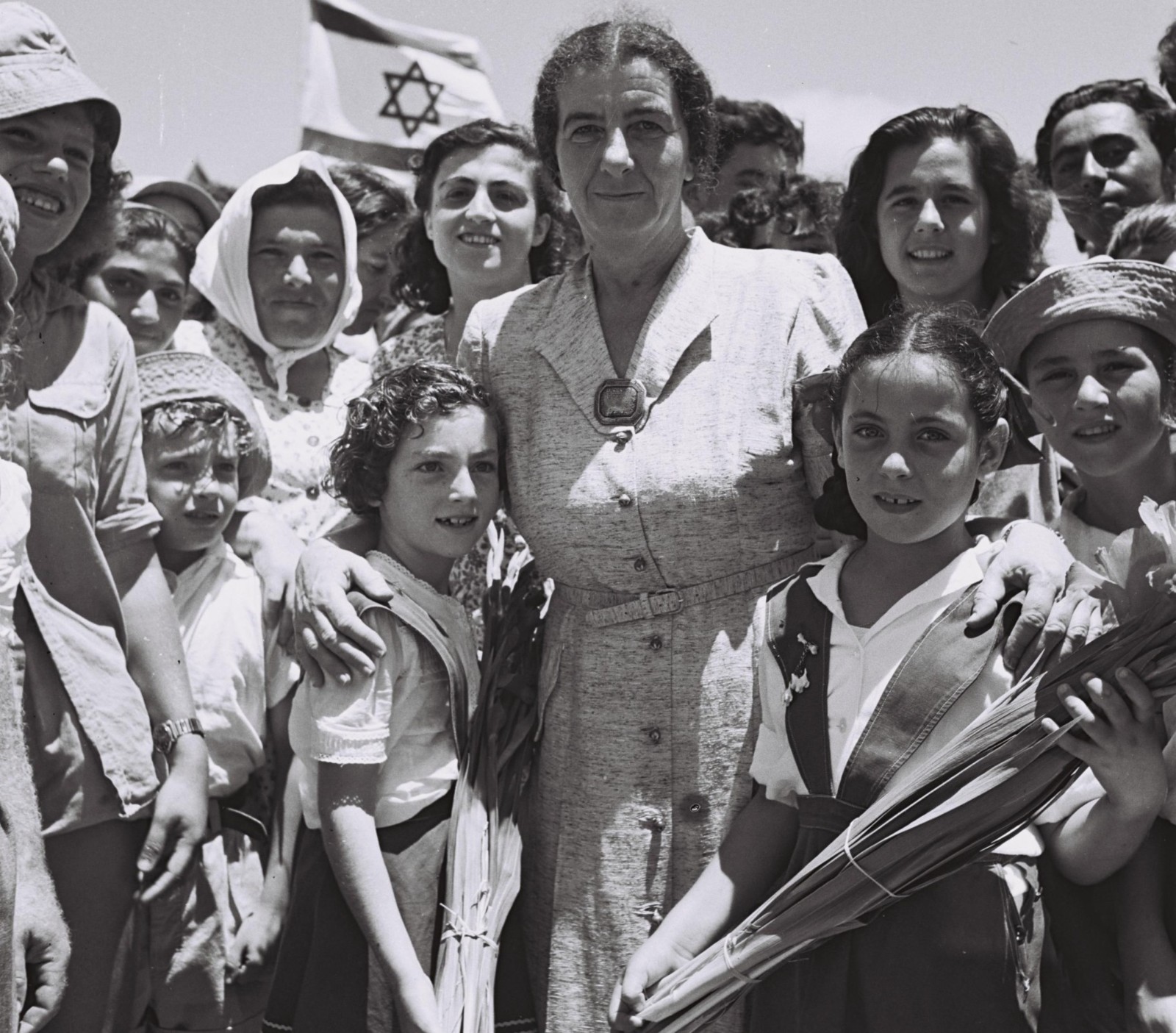 Golda Meir with the children of Kibbutz Shefaim, July 1950. Photo by Teddy Brauner/GPO

Meir was a perpetual victim of prejudice in the Israeli press. Commentators mocked her looks, dress and demeanor then and even now.

The late Haaretz columnist Yoel Marcus, who reported extensively on leaders of the young state, “volunteered that far from Golda’s being the only man in the cabinet, ‘with her hostilities, her jealousies, she is the ultimate woman. A woman with all her negative attributes.’”

Only recently, Haaretz columnist Nissan Shor wrote that “Golda looked 70 when she was 50.”

“That statement is ridiculous, unfair and misogynist,” Lahav tells ISRAEL21c. “Looks are irrelevant to performance. Golda came from a socialist background that valued simplicity. She wanted to be herself, and that meant not coloring her hair or wearing high-fashion clothing.”

An expert on constitutional law, Lahav has been researching and lecturing about Golda Meir since 2008. There is no dearth of information, yet she felt something was missing.

“There are some excellent biographies of Golda,” Lahav says. “What we don’t have is the feminist angle. The more I studied about her the more I felt there was a book here, to tell people about her contributions in the context of the struggles she went through to get recognition.” 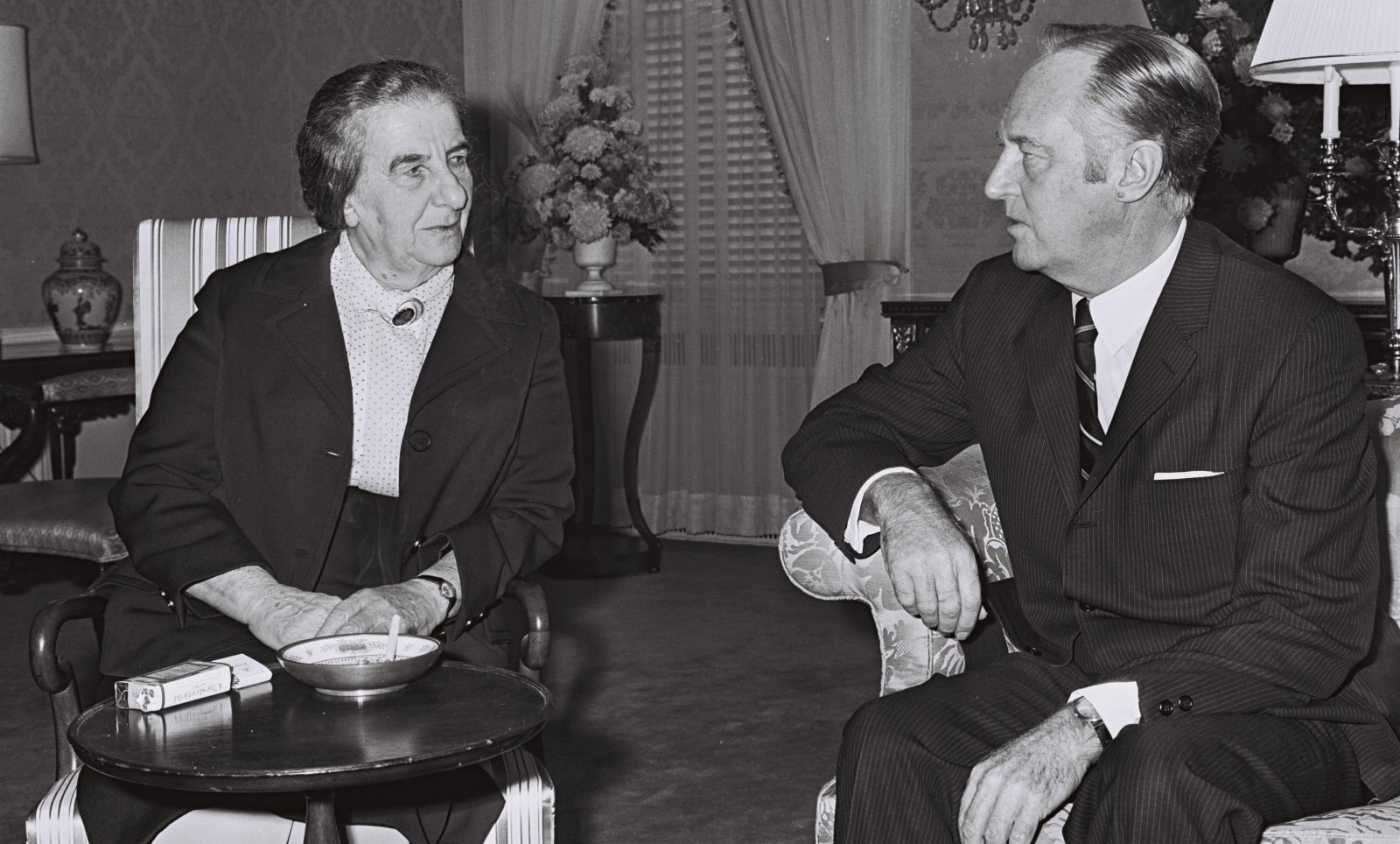 Golda (Goldie) Mabovitch was born in 1898 in Kyiv in Ukraine; the family later moved to Belarus. Girls did not go to school in poor Jewish families like hers, Lahav explains. They stayed home and learned how to run a household.

Only once the family immigrated to Milwaukee, when Golda was eight, did she go to school and learn how to read and write. Her ambition was to be a teacher, a conventional goal that led her to an unconventional career. 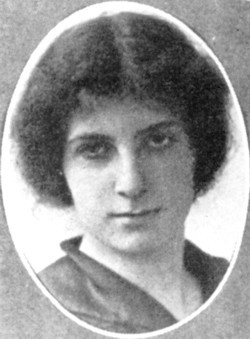 “Her defining moment was when she wanted to go to high school. Her parents did not want her to for several reasons,” Lahav says.

Her mother thought it would be pointless because at the time, female teachers were required to quit once they got married. Her father told her that men do not like smart girls.

“Eventually she ran away from home to Denver, where her sister lived, and that’s where she enrolled in high school,” says Lahav.

“This tells you about Golda’s need for self-fulfillment. She wanted to acquire education and had to fight her parents to do it.”

“If women were in leadership positions, I think the world would look much better because women have the sensibility, the concern for the collective, the ability to insert feelings and intuitions into the process of decision-making. They just need the confidence that their contribution is meaningful.”

In Denver, she developed a taste for political activism. In 1921, she and her new husband, Morris Myerson, immigrated to a kibbutz in Palestine.

“She joined the Labor Party in the early 1920s and slowly went up the ladder. She was very smart and energetic and was willing to invest in party politics,” says Lahav.

“What that meant was that she neglected her children. She had two young children who were taken care of by her sister, her mother and nannies. That was the price she paid.”

Lahav doesn’t think modern women have it much easier.

“In her book Unfinished Business, Prof. Anne-Marie Slaughter writes that today we still do not understand the needs of women who want to have a family and at the same time make a contribution in the public sphere. Golda said this in the 1920s,” says Lahav. 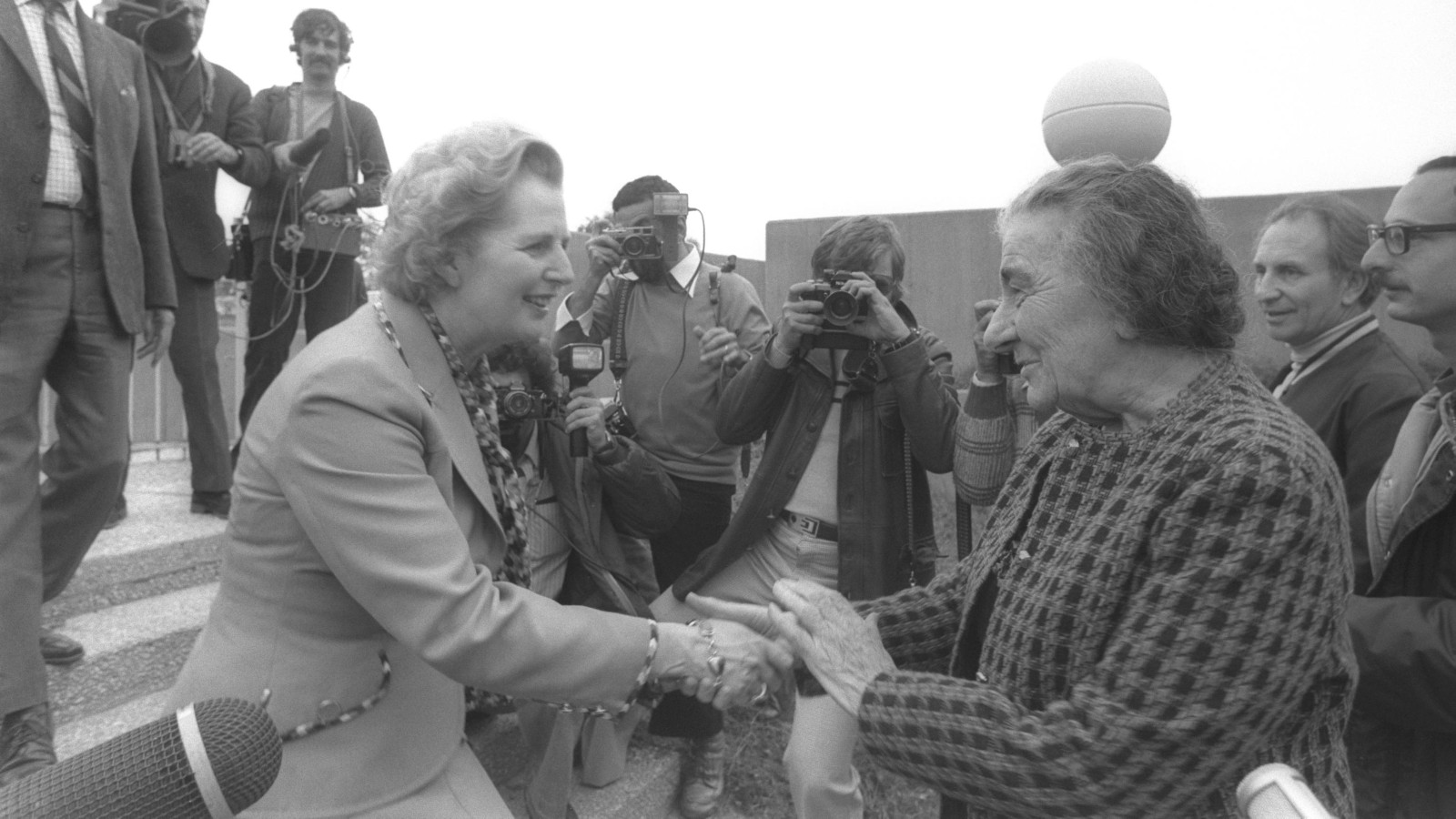 If she could sit down with Golda Meir and interview her, Lahav would ask: What do you think were your major contributions toward the building of the state of Israel? What do you regret? If you could do it all over again, what would you do differently?

I ask Lahav if she’s referring to the Yom Kippur War of 1973, when Israel’s disastrous lack of readiness was blamed on the prime minister and led to her resignation six months later. 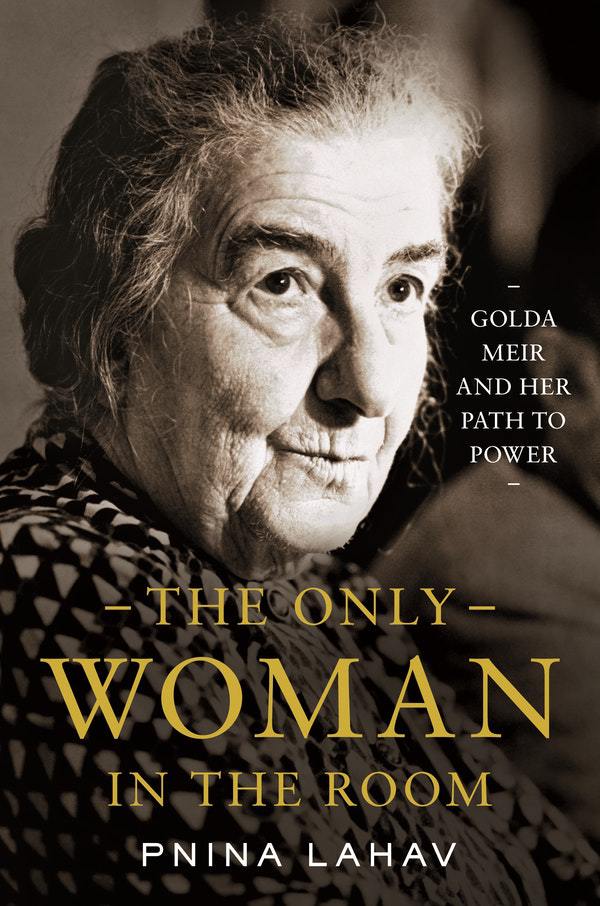 “I urge everyone to stop obsessing about Golda and the Yom Kippur War and look at the entire trajectory of Golda’s life,” Lahav responded.

“Israelis always blame her for the trauma of that war. Golda did try to reach out to Sadat and other Arab leaders, but they refused to talk to Israel and her views were not considered. It’s not fair to put all the responsibility on Golda.”

Lahav herself was not in the country during that time. From 1970-75, she was studying toward her doctorate in law at Yale University.

She came back to Israel to teach law at Hebrew University and then accepted a position at Boston University in 1980. Over the years, she has been a visiting professor at Tel Aviv University, IDC Herzliya, Oxford University and Université Jean Moulin Lyon in France.

What she sees in Meir is “a woman struggling for self-fulfillment, who had a good sense of herself and her abilities and was not always appreciated by the Israeli public.” 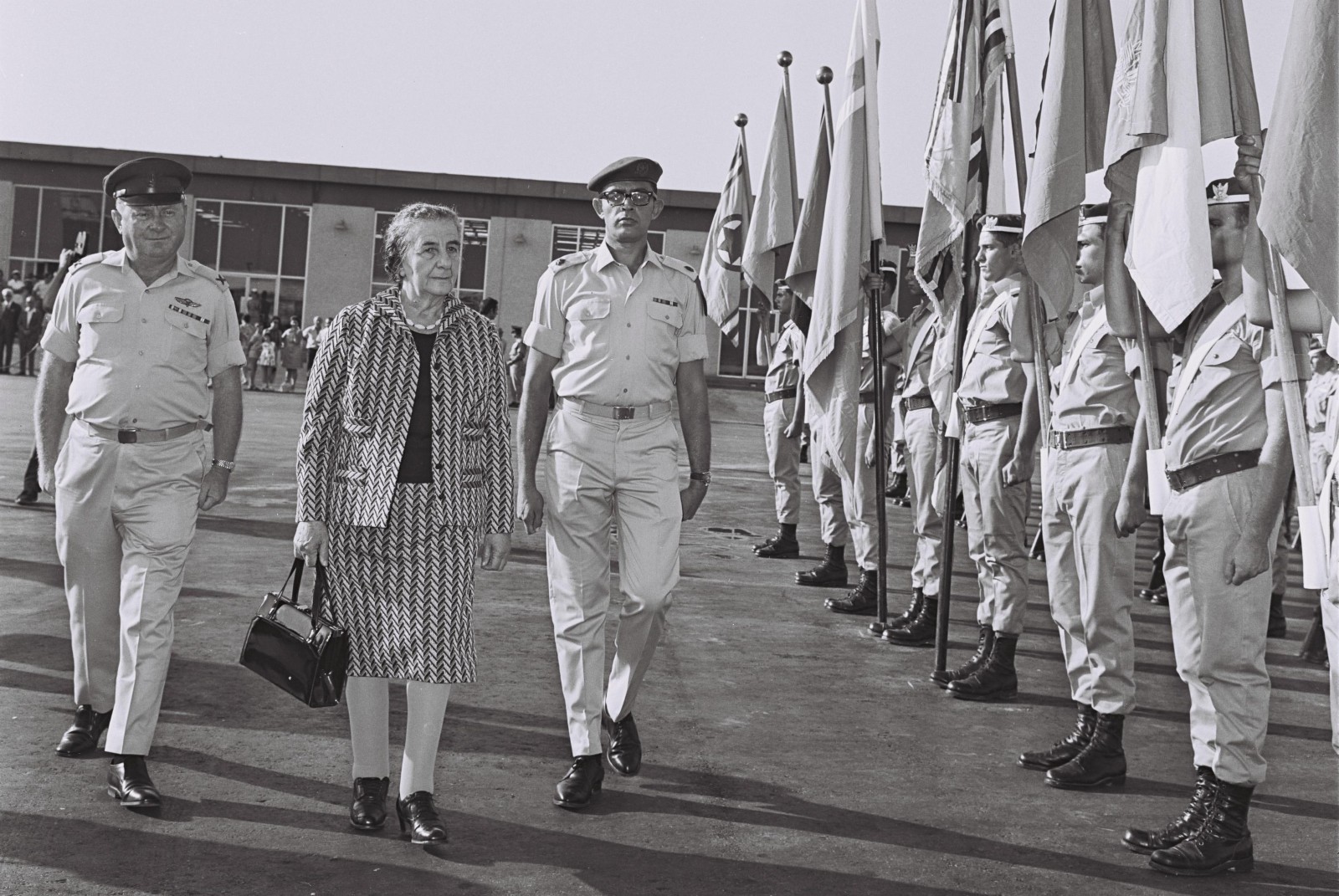 Prime Minister Golda Meir passing the honor guard in Lod airport before departing on her official visit to the United States, September 9, 1969. Photo by David Eldan/GPO

Lahav says she hopes female readers of her book will come away with the determination that “if you want something in your heart, whatever it is, trust yourself and go forward, but remember that the world will not always be supportive of you. Don’t be afraid.”

She observes that some female politicians lack self-confidence and defer to men on issues of security.

“But if they were in leadership positions, I think the world would look much better because women have the sensibility, the concern for the collective, the ability to insert feelings and intuitions into the process of decision-making. They just need the confidence that their contribution is meaningful.”

UNCOVER ISRAEL - Get the ISRAEL21c
Weekly Edition free by email
Sign Up Now!
Bring Israel's story to life.
Millions of people around the world rely on us to gain a deeper understanding of Israel. We are the trusted source for original content you won't find anywhere else.
You can make a difference. Donate today to support journalism that brings Israel’s story alive.
SUPPORT ISRAEL21c
Read more on:   Culture, People, Golda Meir, women empowerment, Pnina Lahav