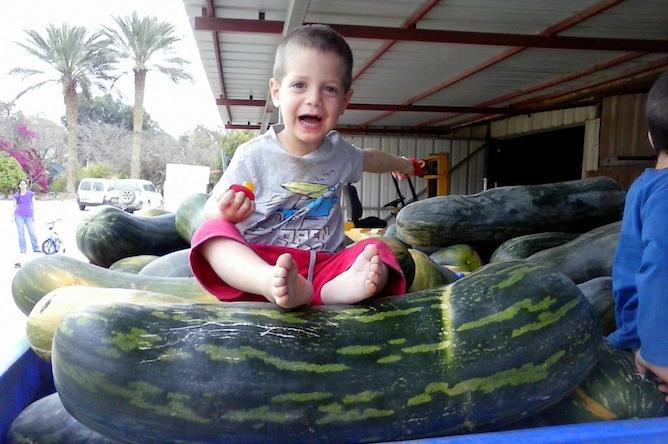 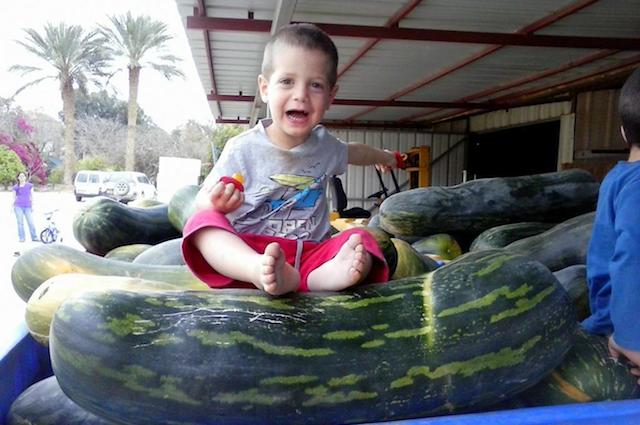 Hey, Mom, check out these pumpkins! Photo by Rami Sadeh

Out of Jack’s magic beans grew a giant bean stalk. But Israeli farmer Rami Sadeh says there was no hocus-pocus involved when he and fellow agriculturist Shoni Gal grew headline-grabbing enormous pumpkins in the hothouses of Ein Yahav.

The gigantic winter squashes, grown by the agricultural village’s produce company Yofi Shel Yerakot (Beauty of Vegetables), are the latest fruits to steer the world of agritech’s eyes to Israel’s desert.

After all, it is in the Arava Desert that Israeli farmers grow the country’s largest percentage of produce exports including peppers, tomatoes, cherry tomatoes, eggplants, melons, watermelons, table grapes, herbs and dates. The Arava growing season is 11 months of the year, and farmers use organic pest control.

The pumpkins – weighing in at 40 kilograms and stretching to a meter long each – are actually for domestic use. Winter squashes are usually hollow but these new massive gourds are solid and are meant for being chopped up and sold in pieces.

According to a press release from the Agriculture Ministry, each pumpkin will cost about $28 whole and are being sold to local wholesalers.

“The pumpkin grows like a melon or watermelon; it’s a warm-season fruit. We have sun all the time so we grow them in winter but instead of a two-month growing season we let them grow slowly for four months,” Sadeh tells ISRAEL21c as to the secret behind the abnormally massive crops.

The water is another reason for Israel’s desert agriculture successes.

Sadeh says contrary to what one would think, there is actually “a lot of water” in the desert, though it’s brackish (salty). Research has shown that salty water produces sweeter produce.

“It’s water from the ground, with salt in the water. And because the fruits and vegetables are in stress and need more water to grow, they grow bigger and even sweeter,” Sadeh tells ISRAEL21c.

And Sadeh has other salad surprises on the way to your table.

“We’re working on brown peppers and something called SugarTable pumpkins,” he says. “Brown peppers taste like a red pepper and have all the same vitamins. Usually a pepper starts out as green and then changes to red or yellow. These peppers start as green and then add red and mix it to form brown. There is no difference in taste between a brown and red pepper but people like different things so this is a new color for your salad.”

The SugarTable pumpkin offers a new taste and new look.

UNCOVER ISRAEL - Get the ISRAEL21c
Weekly Edition free by email
Sign Up Now!
Bring Israel's story to life.
Millions of people around the world rely on us to gain a deeper understanding of Israel. We are the trusted source for original content you won't find anywhere else.
You can make a difference. Donate today to support journalism that brings Israel’s story alive.
SUPPORT ISRAEL21c
Read more on:   Arava Desert, Desertification, Guinness World Record, Spotlight in Israel