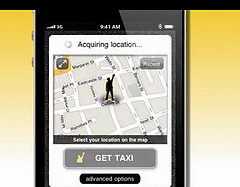 Israeli ride-hailing application GetTaxi has announced a $150 million funding round that will help it start a service in New York for corporate customers and expand its service to new European cities.

The company says it will also invest in expanded services in New York City and London.

Vostok Nafta, a Swedish-based investment company, was named as one of the latest funders with its $25 million investment. “Although competition is ripe everywhere, we think a conservative scenario is that GetTaxi becomes the leading player in Russia and Israel,” Vostok Nafta said in a statement.

GetTaxi, a rival to Uber Technologies, Lyft and Hailo Network in the car-hailing smartphone app business, is currently available in 24 cities, most of them in Israel, but also including London, New York City, and Moscow.

The company has not disclosed its worth but Vostok Nafta says GetTaxi will have a potential valuation of more than $2 billion in “a couple of years down the road.”

GetTaxi operates under the Gett brand in the US.