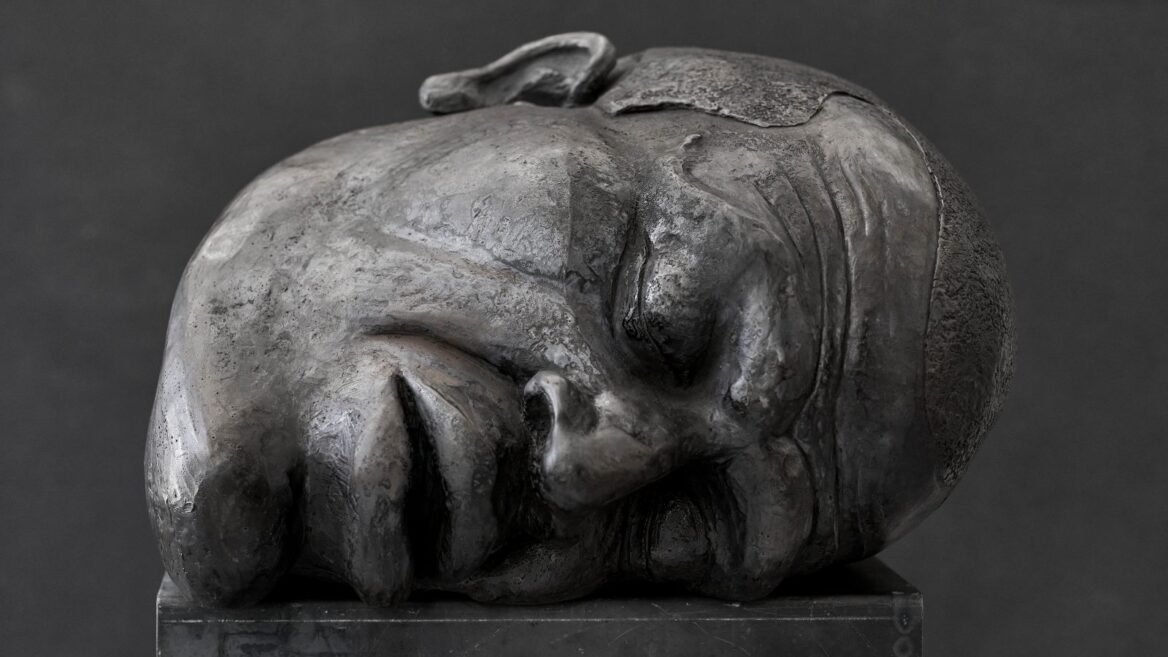 A rendering of the moment of George Floyd’s death by a police officer, created by Israeli sculptor Dan Reisner. Photo by Ron Kedmi

Despite it taking place an ocean away, the police killing of George Floyd left Israeli sculptor Dan Reisner so horrified and upset that he immediately set to work.

The resulting sculpture of George Floyd’s head at the moment of his death has now begun to attract interest from all over the world.

Reisner specializes in sculpture in public spaces. In the past 30 years he has created more than 15 outdoor sculptures from his studio in Jaffa’s Noga neighborhood, such as one called “The Murmur of the Seas” that’s placed in Haifa to commemorate the rescue of Danish Jewry during the Holocaust.

Reisner’s focus on Floyd’s head is not a surprise. The shocking video of his death concentrated almost entirely on Floyd’s face as he died. Reisner himself has also often sculpted heads lying on their side in a state of sleep or dream.

“The occupation with heads is, of course, deeply ingrained in art history,” said Reisner. 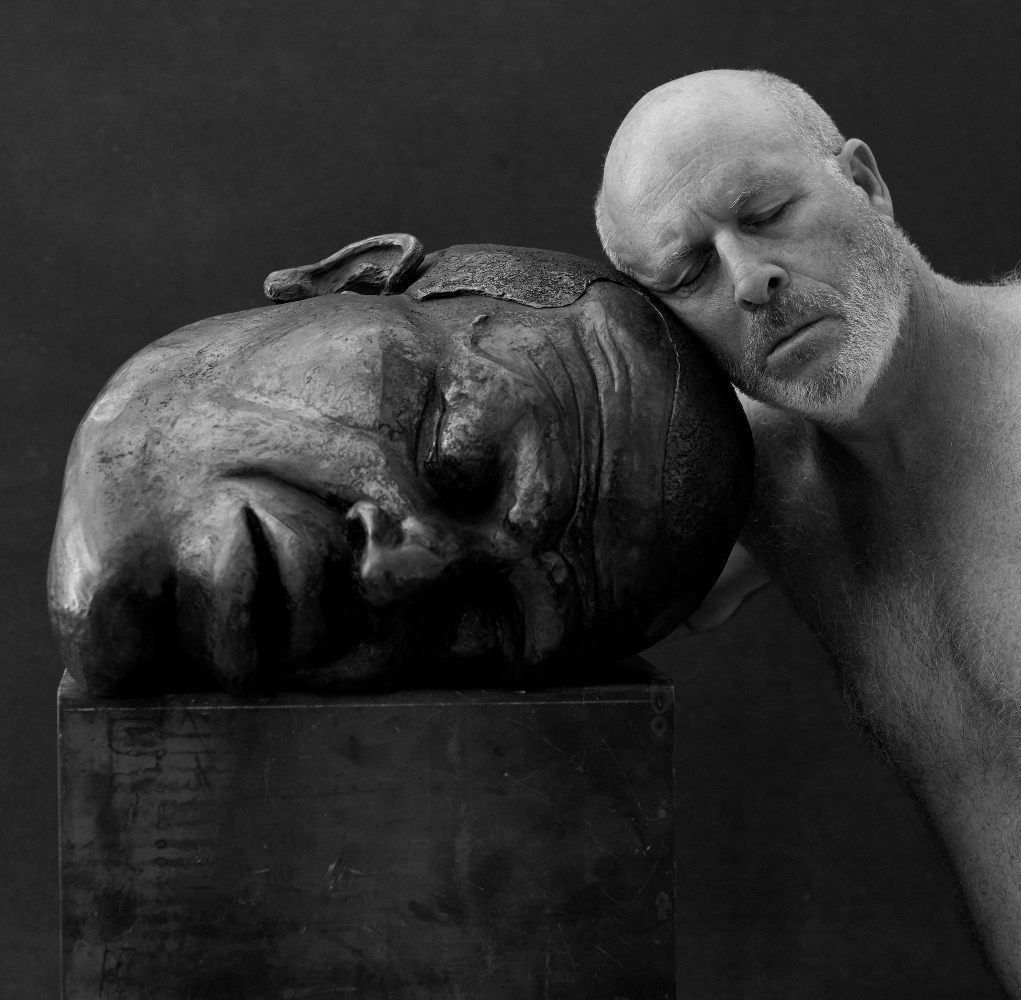 Dan Reisner lays his head on his sculpture of George Floyd. Photo by Ron Kedmi

Art should make a difference

Reisner’s aim was to try to convey the moment where Floyd’s struggle ended with death, when all the facial muscles relaxed.

“This moment of death is a moment of awakening, of something new, and that’s why it was so important for me to capture the essence of this moment of transformation that moves from the personal to the social,” he adds. “It’s this eruption that broke out… this mighty blast that was created by George Floyd’s death.”

As a nod to the time it took for Floyd to die, Reisner included what looks like tree rings which, when added up, show the eight-plus minutes of Floyd’s killing. What appear to be cracks in the tree rings also have meaning, showing the time of his death. 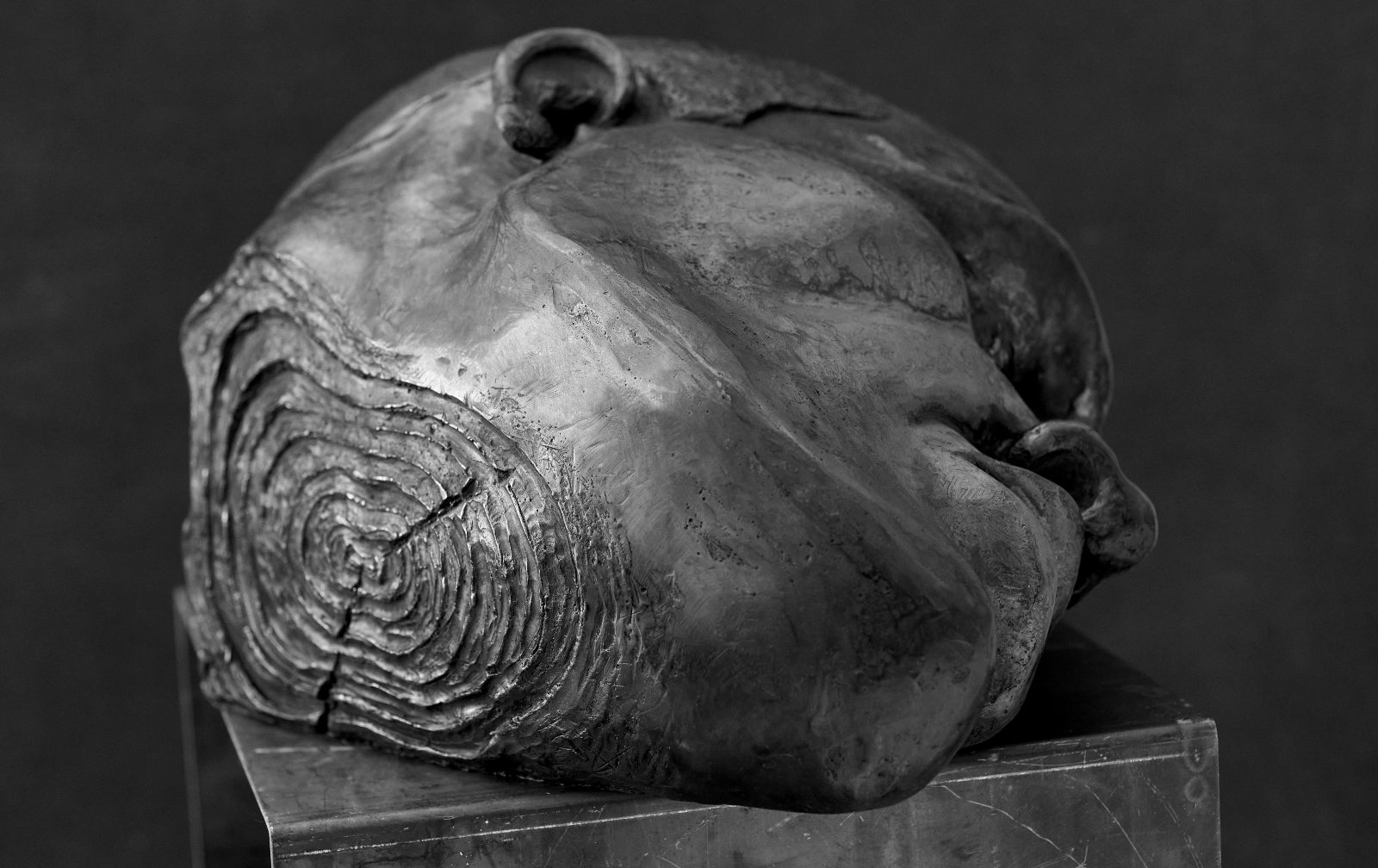 The tree rings shown across George Floyd’s neck depict the process and time of his death. Photo by Ron Kedmi

“It’s kind of a time capsule that documents the murder,” Reisner explains. “For me, the whole idea and its essence is to represent that these things can’t keep on happening and that the need for change is so great.”

Reisner notes that as a Jewish person whose family and people were persecuted, he cannot stand on the sidelines when he sees injustice.

But he also notes that he is an outsider who doesn’t understand all the issues that Floyd’s killing brought to the surface, and even the criticism more specific to him from the African-American community about white artists creating works around their pain.

“As an Israeli artist, I am not aware and cannot understand the complexities of people living in the United States. I can’t even presume to do so,” he says. “I approached this sculpture in the most honest and immediate way I could.”

George Floyd.Bronze sculpture by Dan Reisner.There is a deep moment of tranquility at the very moment of death.The…

Reisner also shared his work on the sculpture in a post that went viral, reaching more than 200,000 people and generating multiple discussions, some of which he says are difficult and some of which have been enlightening.

“The post became a very important reflection of the social occurrences that are taking place these days in the US,” he says. “It’s amazing to see the dialogue between people.”

“George Floyd’s brothers and his sister-in-law saw the sculpture, and they responded in a beautiful and touching way for me,” he says. “I appreciate the Floyd family so much and it means so much that they support the sculpture and are interested in it for the foundation they’re planning on establishing.”

Reisner hopes his sculpture will reach museums in the US and create a dialogue “from what will hopefully be a very respectful place. We want this sculpture to be in the public domain so that people could come and see it.”

He concludes: “I can only hope that this sculpture will do the job it needs to do across the world, that people will be able to understand one another and lead to a long-awaited change.”​