A Palestinian patient of Save a Child’s Heart recovering at Sylvan Adams Children’s Hospital of Wolfson Medical Center in Holon. Photo courtesy of SACH

Some of the children, and their mothers, are Gazan Palestinians.

That’s par for the course at Save a Child’s Heart (SACH), a voluntary organization that has provided lifesaving medical care to nearly 6,000 children from 62 countries since 1995.

The children are treated for free at Sylvan Adams Children’s Hospital of Wolfson Medical Center and then recuperate under medical supervision in SACH’s children’s house.

Normally, those from Gaza and Palestinian Authority territories can go directly home to recuperate under the care of medical staff trained by SACH.

But these are not normal times.

Since May 10, thousands of missiles have been launched into Israel from Gaza, causing death and destruction. The borders are closed.

Three Gazan kids are staying in the children’s house — one infant, one 12 months old and another six years old. Two are accompanied by their mothers and the other by a grandmother. Six more Gazan children are still in the hospital. 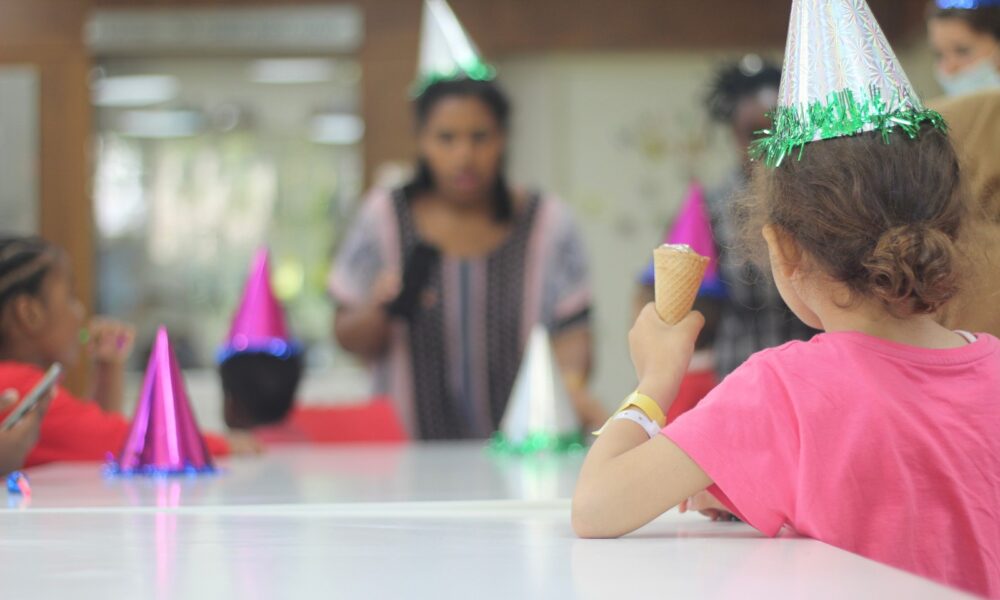 A six-year-old girl from Gaza enjoying a birthday party at the children’s house of Save a Child’s Heart. Photo courtesy of SACH

The past week didn’t only mark another round of attacks from Gaza. It also marked the end of Ramadan, a month of fasting, prayer and charity on the Muslim calendar.

The Gazans joined other Muslim families at the SACH children’s home – a 14-year-old from Kosovo and a one-year-old and six-year-old from Zanzibar, with their mothers – in nightly break-fasts and the Eidal-Fitrfeast capping the final day of Ramadan (May 12). 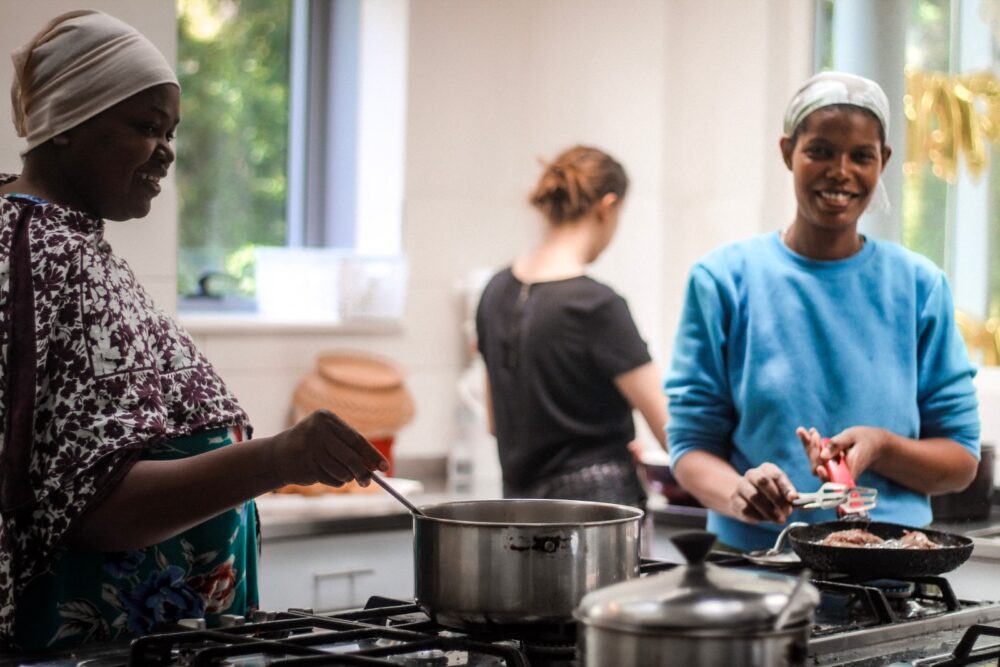 Mothers of Save a Child’s Heart patients cooking together at the house where the kids recover before going home. Photo courtesy of SACH

“Ramadan, like all other religious holidays, is always very special in the SACH family of patients, staff and volunteers,” says Shapira.

“We try to create a warm, supportive environment for everyone to continue their religious life as much as possible here. If a Christian wants to go to church on Sunday, or a Muslim wants to go to a mosque on Friday, we try to make it happen. We always have Palestinians who come with small prayer rugs,” she says.

“But this year, Ramadan was much more powerful. Having everyone together in the children’s home from three Muslim countries, including Gaza, was unique.”

‘This is your family while you’re in Israel’

“We found out early in Save a Child’s Heart’s history that if you want a child to feel at home, he needs to eat what he’s used to,” says Shapira.

“We give the mothers fresh ingredients and each cooks their traditional food. Some mothers cook with babies on their backs. There is always an exotic mix of smells and tastes coming out of our kitchen.” 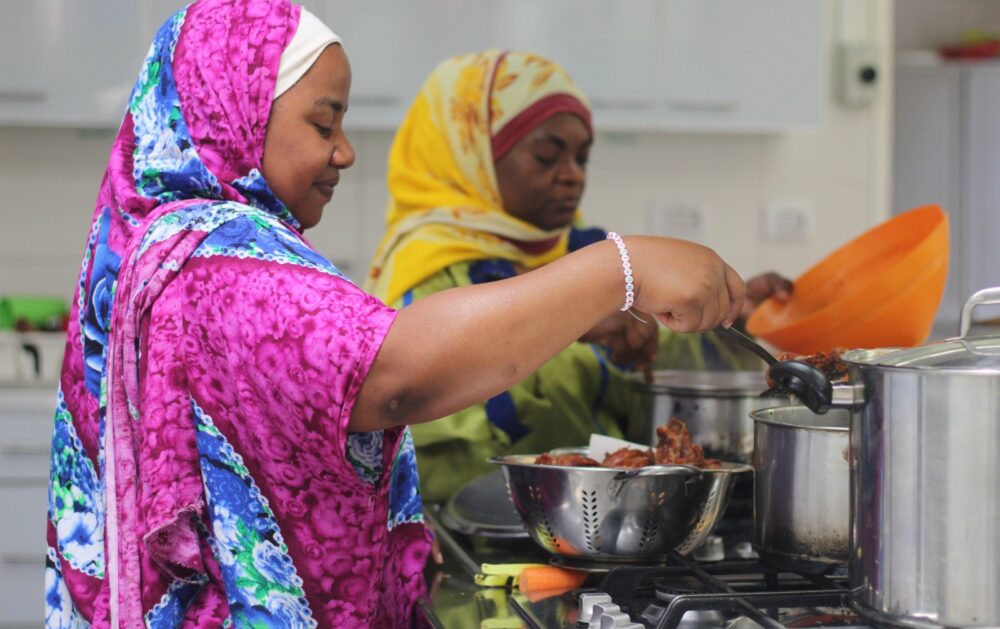 Mothers cooking their native cuisines at the children’s house of Save a Child’s Heart. Photo courtesy of SACH

No matter how many distinct cuisines are prepared on a given day at SACH’s children’s house, all children and caregivers eat together like a family, says Laura Kafif, a native of Northern Ireland who has supervised the children’s house for the past 20 years.

“I try to communicate to everybody here, regardless of language, religion and nationality, that this is your family while you’re here in Israel. Everyone is here to help the children recover and go home healthy,” Kafif tells ISRAEL21c.

During Ramadan, the mothers from Zambia, Kenya and Tanzania prepared food for the Muslim children in place of mothers who were fasting until sunset.

“Our team of professionals and volunteers at SACH has Christians, Jews and Muslims,” Shapira points out.

“We have a Muslim employee in the children’s home and another in the hospital program, who were also observing Ramadan. Like many Israeli hospitals, Wolfson has many Muslim nurses, doctors and other staff members treating all children no matter what.”

Keeping the kids calm under fire

This is hardly the first time Kafif has had to manage the SACH children’s house under challenging conditions.

Her primary aim is maintaining a calm atmosphere and the predictable daily routine of medical checkups, play with volunteers, communal meals and other activities. 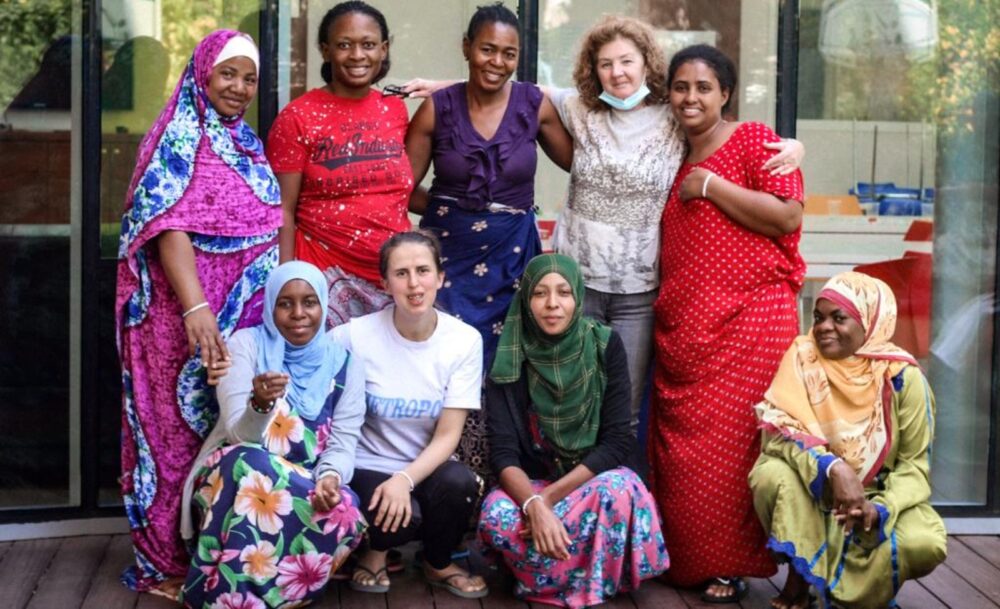 Housemother Laura Kafif (second from right, top row) with mothers staying with their recuperating children at Save a Child’s Heart. Photo courtesy of SACH

“With corona ending, we were getting back to some sort of normality, and we went from that to this,” Kafif says, referring to the missiles.

“I try not to show any worry or stress because it will make the nurses and mothers worry as well. I try to explain what they will experience but most of these children don’t have sirens and bomb shelters at home,” she says.

“Our staff works hard to make sure everybody is okay. It’s difficult for them. The mothers from Gaza are concerned about their families there.”

The first two nights of the conflict, everyone slept in the building’s shelter as Holon was in the line of fire. On May 11, a rocket crashed into a bus in the city, wounding two adults and a five-year-old girl.

It’s been mostly quiet since then. When we spoke to Kafif on Tuesday, some of the children were playing outside in the garden.

“At the moment, the patients from Gaza can’t go home,” says Kafif. “Let’s hope it comes to an end soon and everyone is able to go about their daily lives.”

Adds Shapira: “It’s an extremely difficult and sad situation. We need to continue doing what we do and remember that unity is our most important power. Together we can overcome everything and continue doing good in this world.”