An almond orchard in Israel. Photo by Nicky Blackburn

The image of the rugged Israeli farmer tending to the fields, shaking trees by hand to force olives and apples and grapes to drop, is both iconic and romantic.

Most farms in the Western world – including Israel – are more akin to mechanized outdoor factories than to the manual labor-intensive kibbutz fields of yore.

All that technology represented an opportunity for Boaz Bachar and Iftach Birger, the CEO and COO, respectively, of Fieldin, an Israeli startup that aims to digitize agriculture.

“Commercial farming runs based on operational capabilities, not agronomical insights,” Bachar tells ISRAEL21c. “It’s just like manufacturing but instead of making a car, we produce a nut or a grape. We felt, let’s digitize the entire growing process, the day-to-day of the farm.” 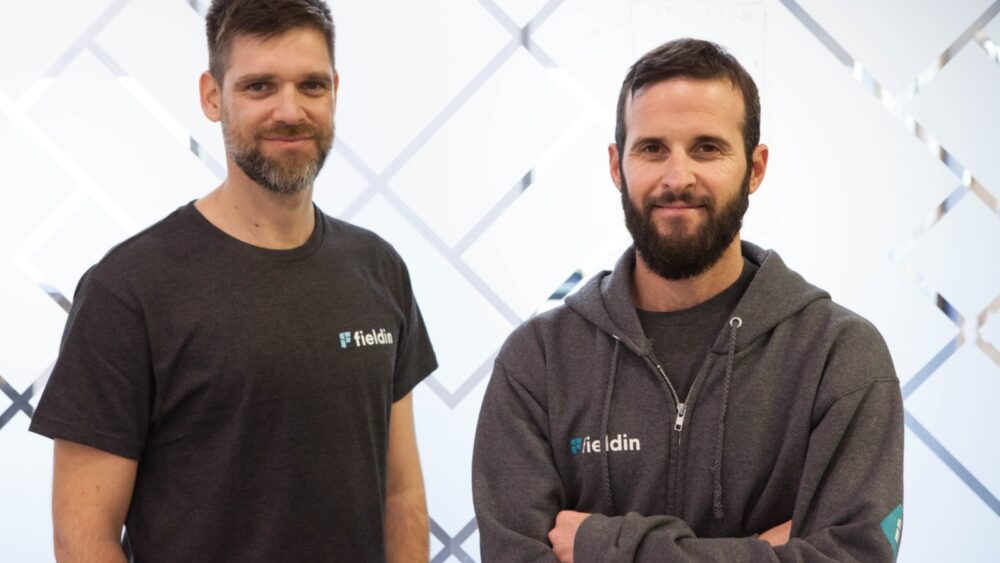 Fieldin does this primarily by attaching sensors to the equipment on a farm – the tractors, plows, harvesters and pesticide sprayers. Those sensors then wirelessly transmit data about what’s happening in the fields.

Did you miss a row when spraying?

How many seconds does it take to harvest each tree and what can be done to improve efficacy?

Are your employees mowing and edging to the best of their abilities?

How much water is being used?

How egregious are the carbon emissions?

This information is then shared with the appropriate farm staff. The Fieldin system can be customized to send messages as needed.

Crew managers might want an update every few hours when they take a break from their work in the fields. A farm’s owner might only need a summary once or twice a week.

“The first thing we do is create benchmarks, something growers never had before,” Bachar explains.

“What is a good productivity rate in terms of acres per hour? No one knew before Fieldin. Everyone had their own tribal and cultural practices. When we look at the broader picture, we can run analyses. That’s how farms improve their efficiency. Within a month of benchmarking, they will start to see success.”

Fieldin’s software helps farmers avoid equipment failure, improve their harvest activities, track the length of processes, and determine the best times to spray (generally at night when the wind is calm).

Fieldin has focused on high-value crops — mainly almonds, olives and grapes, although one big client is Taylor Farms, which harvests a third of all the lettuce consumed in the United States.

Birger was born into a farming family. “We are one of the biggest growers of almonds and olives in Israel,” Birger tells ISRAEL21c. His father was chairman of Israel’s almond board for nearly 20 years.

When Bachar and Birger met (“It’s a small country, everyone knows everyone; we had a lot of mutual circles,” Bachar says), it was clear that improving agriculture was their calling.

The duo established Fieldin in 2013. By 2018, they had already reached 50% of the relevant growers in Israel and decided to branch out. Fieldin established an office in Silicon Valley and Bachar and Birger moved to Sunnyvale. 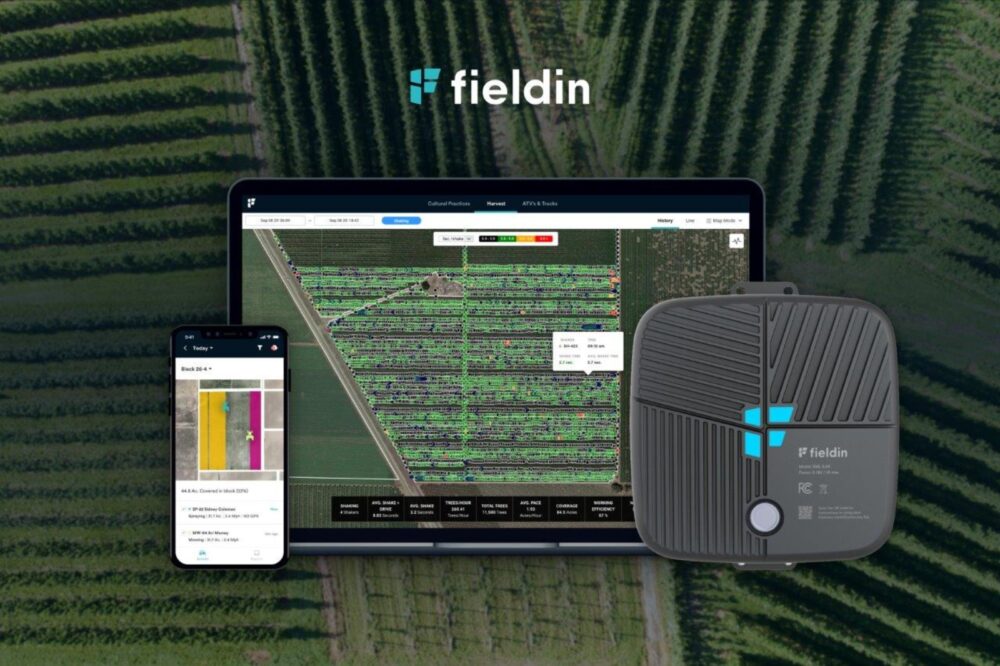 Today, the company has 60 (mostly engineering) employees in Yokne’am, Israel; another 46 in California; and four in Australia (where one of their California clients manages a large almond farm).

Fieldin now has some 200 clients around the world, including five of the 10 largest farms in California. Among its clients are Olam (almonds), California Olive Ranch (olives) and Carmel Wines (grapes) in Israel. Fieldin software supports more than 20% of global production of almonds.

Having raised $55 million in investments, Fieldin is working toward enabling farms to become fully autonomous with mechanized pickers and sprayers.

“Our AgOS [agricultural operating system] easily interfaces with digital equipment and can both manage and disseminate the data produced by the coming wave of autonomous farm technologies,” Bachar says.

“This is a gamechanger for commercial farmers who want to thrive amid the complexities of the coming agricultural era.”

Fieldin claims that its software (the sensors are customized from off-the-shelf hardware) can improve productivity by 25% as measured by the number of acres covered per shift. Across its growing client base, Fieldin has monitored 2.7 million tractor hours and 10 million acres.

By optimizing how gasoline-powered farming equipment is used, carbon emissions can be reduced, as can pesticide use.

“This is how we try to make farming more sustainable,” Birger tells ISRAEL21c, although he’s quick to add that “it’s not just about climate change. It’s about better farming.”

Adapting to the pandemic

Bachar and Birger found themselves trying to grow their company in the midst of a once-in-a-century global pandemic. It was a challenge at first.

With the number of hotel stays and flights dramatically reduced at the beginning of the Covid-19 crisis, demand for fruits and vegetables used by food services dropped. That was a problem for farms, which must plant their fields months in advance based on sales forecasts.

Then, by the end of 2020, just as growers were starting to adapt to their new reality, demand bounced back, leading to supply-chain problems. By the first quarter of 2021, the situation had returned to pre-Covid levels.

The need to restrict human interaction when a pandemic is raging has only accelerated the industry’s desire to automate. That was one of the reasons Fieldin raised a $30 million Series B round this September, led by Fortissimo Capital, in September.

Some of these funds will help beef up its grower success team. Each farm is assigned a Fieldin team member who works with the farmers to install the sensors and set up the notification interface and centralized dashboard. “They accompany growers throughout the journey,” Bachar says.

Fieldin is not without competition, but other companies in the space mainly are after specific slices of the farming pie such as irrigation or budgeting, rather than digitizing an entire farm and all its equipment.

Bachar estimates the worldwide value of high-value crops at $1.2 billion. “We believe we can capture 5% of that,” he says.

California’s agricultural industry alone is worth $30 billion, he adds.

The ultimate goal is to bring a high-tech sensibility to an industry that has been typically slow to embrace the technological revolution.

If that results in higher quality food at competitive prices, with greater profit for the farmers, it will be a win-win for everyone in the field.

UNCOVER ISRAEL - Get the ISRAEL21c
Weekly Edition free by email
Sign Up Now!
Bring Israel's story to life.
Millions of people around the world rely on us to gain a deeper understanding of Israel. We are the trusted source for original content you won't find anywhere else.
You can make a difference. Donate today to support journalism that brings Israel’s story alive.
SUPPORT ISRAEL21c
Read more on:   Environment, ag-tech, farming, FieldIn, Climate Crisis