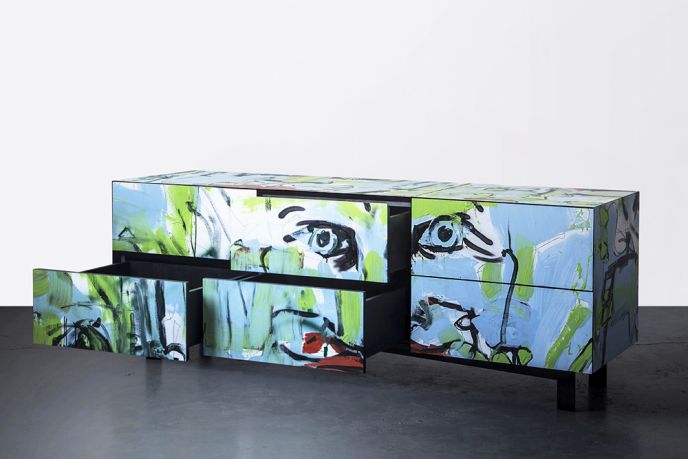 This dresser was the first item in the Street Capture series.

This dresser was the first item in the Street Capture series.

From their studio in South Tel Aviv’s Florentin neighborhood, industrial designers and best friends Ariel Zuckerman and Eran Shimshovic watched as the old-time carpentry workshops closed at the end of the workday and the streets gave way to lively nightlife in the gathering darkness.

Month by month, more carpenters were closing shop permanently amid the changing character of Florentin. Zuckerman and Shimshovic realized they could combine the vanishing world of furniture-makers with the emerging vibrancy of street artists.

Street Capture, their resulting line of high-end, one-of-a-kind furniture, is a hit in Israel and abroad. Now the pair has expanded into tableware and is contemplating a road show in America.

“Taking something two dimensional from the public space and make it into a three-dimensional piece of furniture for your house preserves both the craft and the culture, Zuckerman tells ISRAEL21c.“It’s like taking a stone from the Berlin Wall and making something new from it.” 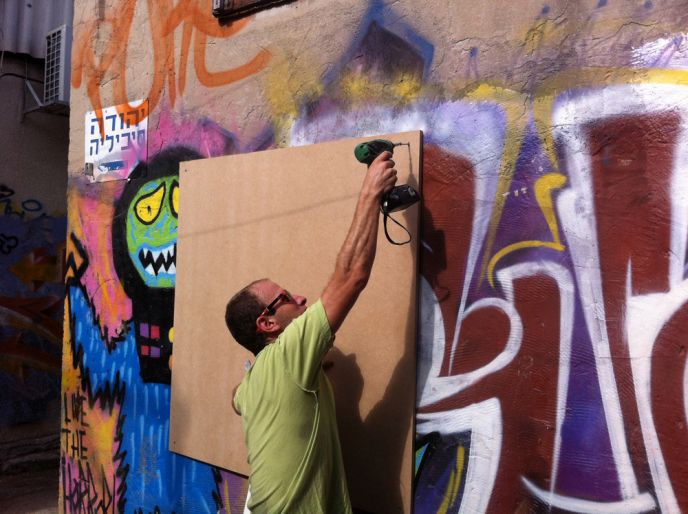 Eran Shimshovic mounting a blank board in Florentin.

They began by attaching blank wooden boards to the walls of Florentin’s alleyways, knowingly supplying a clean canvas for graffiti artists. Some of the boards got stolen, but most of them were soon covered in bold graphics.

“We didn’t say anything to anyone, as we were curious to see how it would evolve in the most ‘natural’ manner,” says Zuckerman, speaking to ISRAEL21c in his new studio in the Neve Tzedek neighborhood.

“Each morning we discovered something new. Sometimes the boards remained untouched, sometimes just a few penciled lines or letters were added. Finally, layer by layer, a ‘whole’ work was created.” 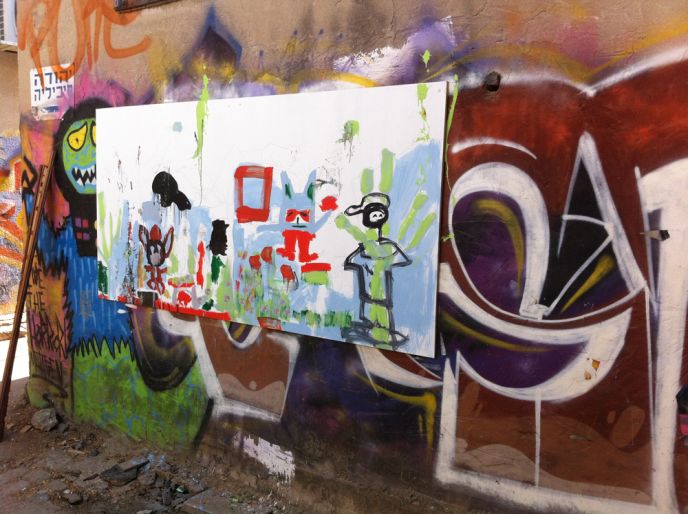 They then took the boards to their studio, transforming random night-time inspiration into a sort of artistic time capsule. The artwork is protected with acrylic and fused onto HDF, a dense, smooth fiberboard that can be cut, drilled, painted or processed.

“The first product was a dresser we called Zerifin 35, which is the street address where we hung the wooden board. Then we did a cocktail table,”says Zuckerman.

“These were very authentic. Then, as people started finding out about what we were doing, street artists asked us how they could participate,” he explains. 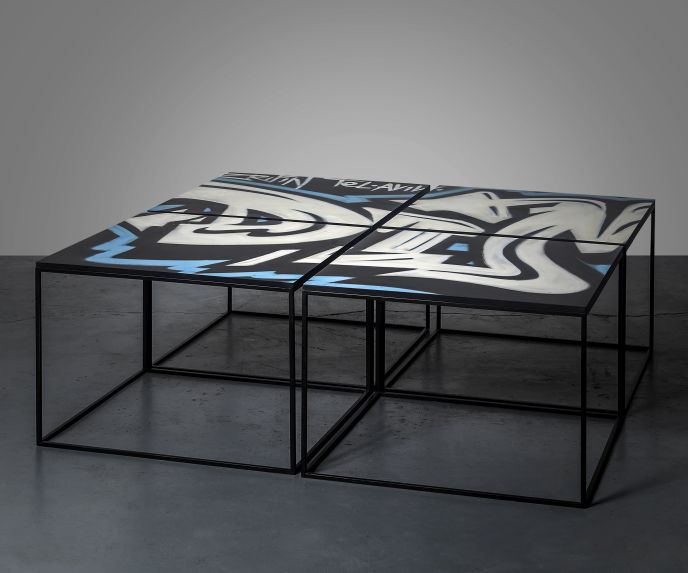 Each Street Capture piece is unique.

“So now we are doing collaborations with street artists. It’s less authentic because we control the process, but they are free to paint what they like — all in one day. We pay them and give them the credit.”

Orders started coming in after they exhibited their creations at Tel Aviv’s contemporary art fair, Fresh Paint, and at Saga Gallery in Jaffa. 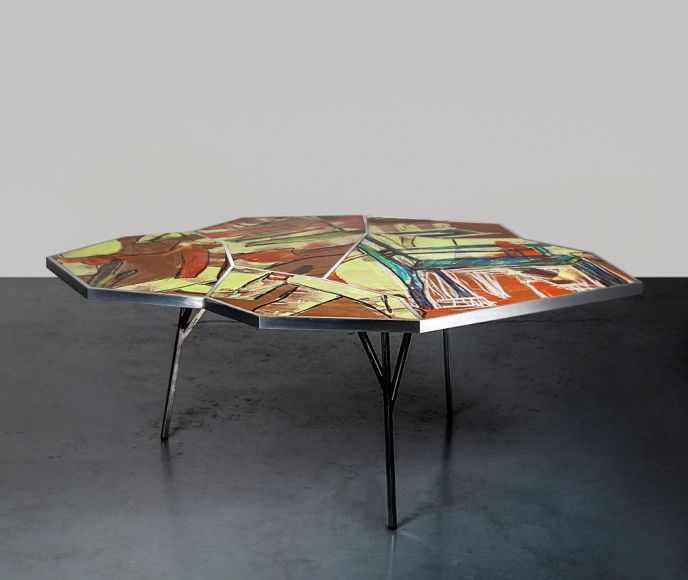 They recently had an auction of Street Capture items at Tiroche Auction House in Herzliya Pituach, where they hope to pursue a collaboration with Israel Prize-winning designer Dan Reisinger, who’s responsible for some of Israel’s most classic business logos including that of national airline El-Al.

The design website Touch of Modern may soon begin selling Street Capture online. The dresser costs about $4,000, while a four-table cluster goes for about $2,000. Items in a new line of tableware, such as fruit bowls, will be priced at around $300.

Zuckerman, 37, worked for 10 years as a freelancer for Keter Plastic, designing many of the company’s extruded-plastic furniture and housewares for sale at North American chains including Costco, Loews and Home Depot.

In 2010, he opened Studio Ariel in Florentin with his childhood buddy Shimshovic, and initially created lighting collections that met success in Israel and abroad. 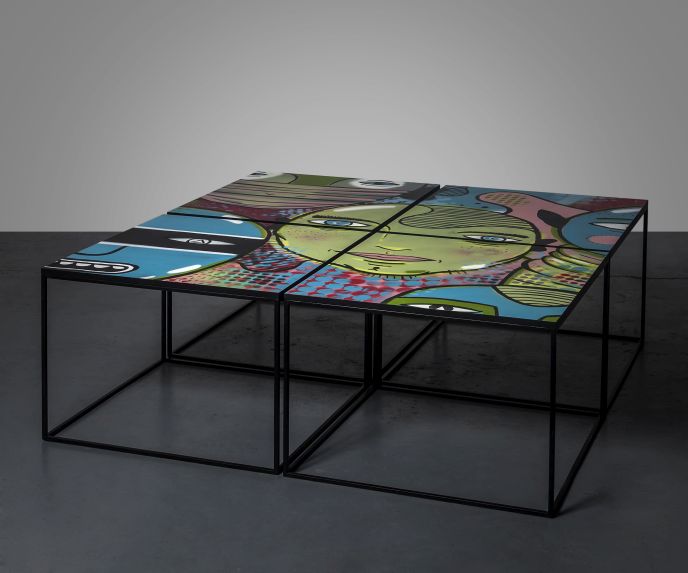 Street Capture has caught the attention of leading museums and galleries in San Francisco, New York, Toronto and Tokyo. But Zuckerman and Shimshovic do not intend merely to ship their products. They want to make them specific to each city.

“We got the crazy idea to do a road trip to five or six locations in the United States, getting local mural artists in those cities to paint on the wooden boards, and then after a month or two,we would make furniture out of them. We want to do an exhibition of them all together, showing which one was made in Chicago, which one in LA, and so forth,” says Zuckerman. “We just need to find local art producers and workspaces.”

Street Capture obviously is striking a chord. “People want to feel unique and to be part of a community, and this is a way to do that,” says Zuckerman.