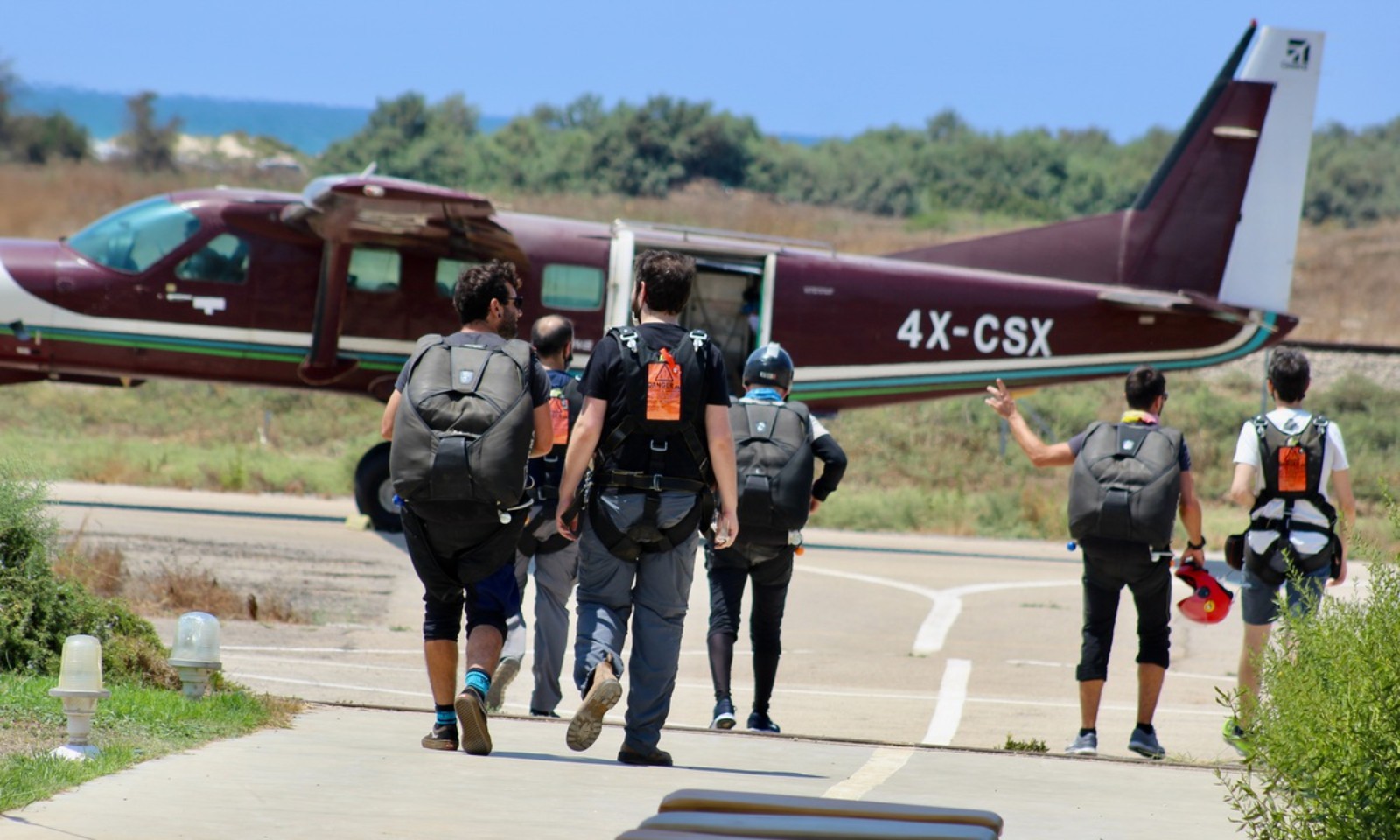 Skydivers at Paradive heading to the plane. Photo by Merav Blum
#Freefall

From terror to exhilaration in 60 seconds

Jumping from a plane at 14,000 feet gives our correspondent an experience he’ll never forget. Find out how you can enjoy your own chuting adventure in Israel.

Jumping out of a plane at 14,000 feet is not something you do without careful consideration.

Or maybe that’s exactly what you do. Otherwise, how would you sleep the night – let alone the entire week – beforehand.

My family and I went skydiving recently at Paradive, the skydiving center at HaBonim Beach just north of Zichron Yaakov. Four of us jumped; the official occasion was a treat for our son’s 30th birthday and a belated milestone birthday for me, too.

The website for Paradive lists all the possible things that could go wrong: bone fractures, joint dislocations, cuts and wounds, ruptured eardrums. Fortunately, no one has ever died jumping at Paradive. Globally, the statistic is one fatality in every 750,000 jumps.

I suppose that’s comforting, although as I sat at the edge of the plane, my legs dangling through the open door staring into the abyss, a sense of peace and tranquility was the last emotion to arise. I was terrified and second guessing why I was here in the first place.

Ziv Kochva, a parachuting guide at Paradive and its CEO, had a ready answer. “Anyone who doesn’t parachute once in his or her life is missing out,” he told ISRAEL21c. “Fear turns into elation. Nothing can be compared with it.”

Paradive is one of the four main skydiving centers in Israel. It’s been operating for more than two decades and has organized some 450,000 jumps. The facility is run like a factory: On the Friday that we jumped, there were hundreds of thrill seekers on site. The staff moved us efficiently through the process. 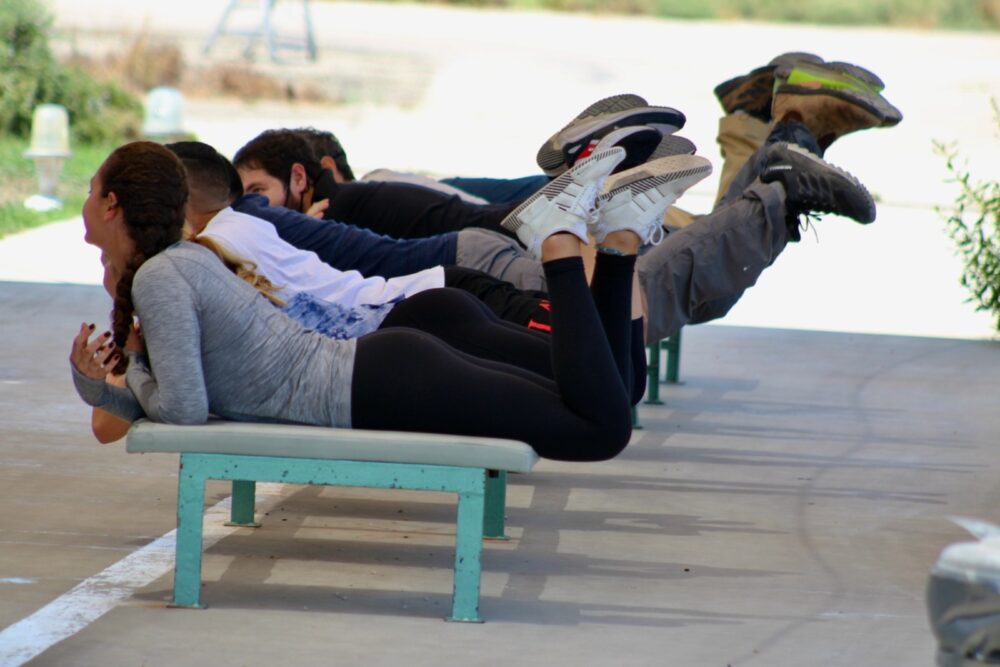 A Paradive instructor showing Brian Blum’s group how to position their limbs during the freefall and landing. Photo by Merav Blum

First, there’s the obligatory movie to get your heart racing. Then there are all the forms to fill out that give you one last chance to back out (and to cover Paradive’s liability).

After you’ve paid, you meet your instructor, get into your gear, including a helmet and goggles, and practice how to hold your arms and legs during the freefall and landing. You’re advised to wear long pants and closed shoes – it can get cold at 14,000 feet! 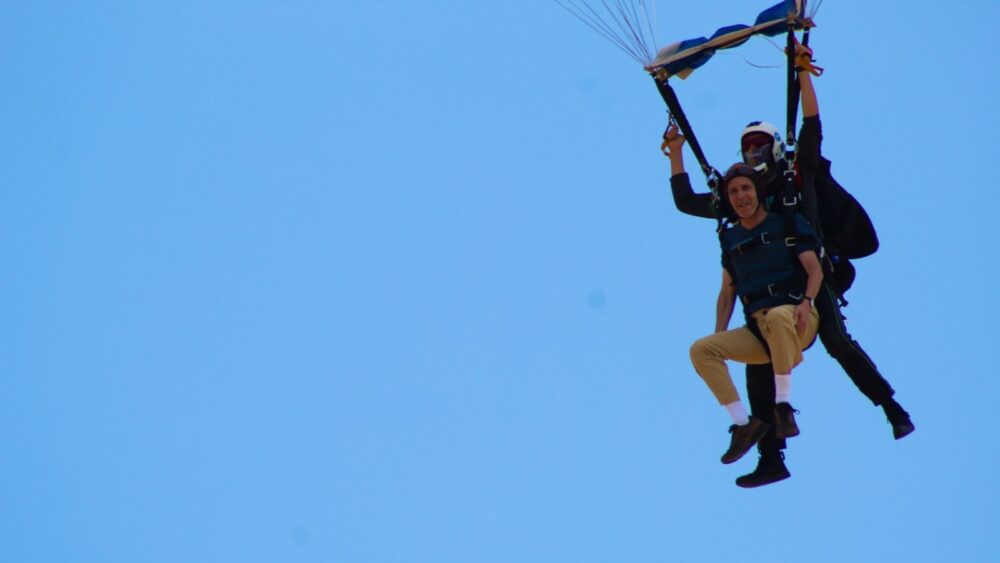 This was not my first time jumping out of a plane. I went skydiving in California, some 40 years ago, but back then, you dropped solo, connected to the plane by a tether which, after seven seconds of fast falling, opens your parachute. 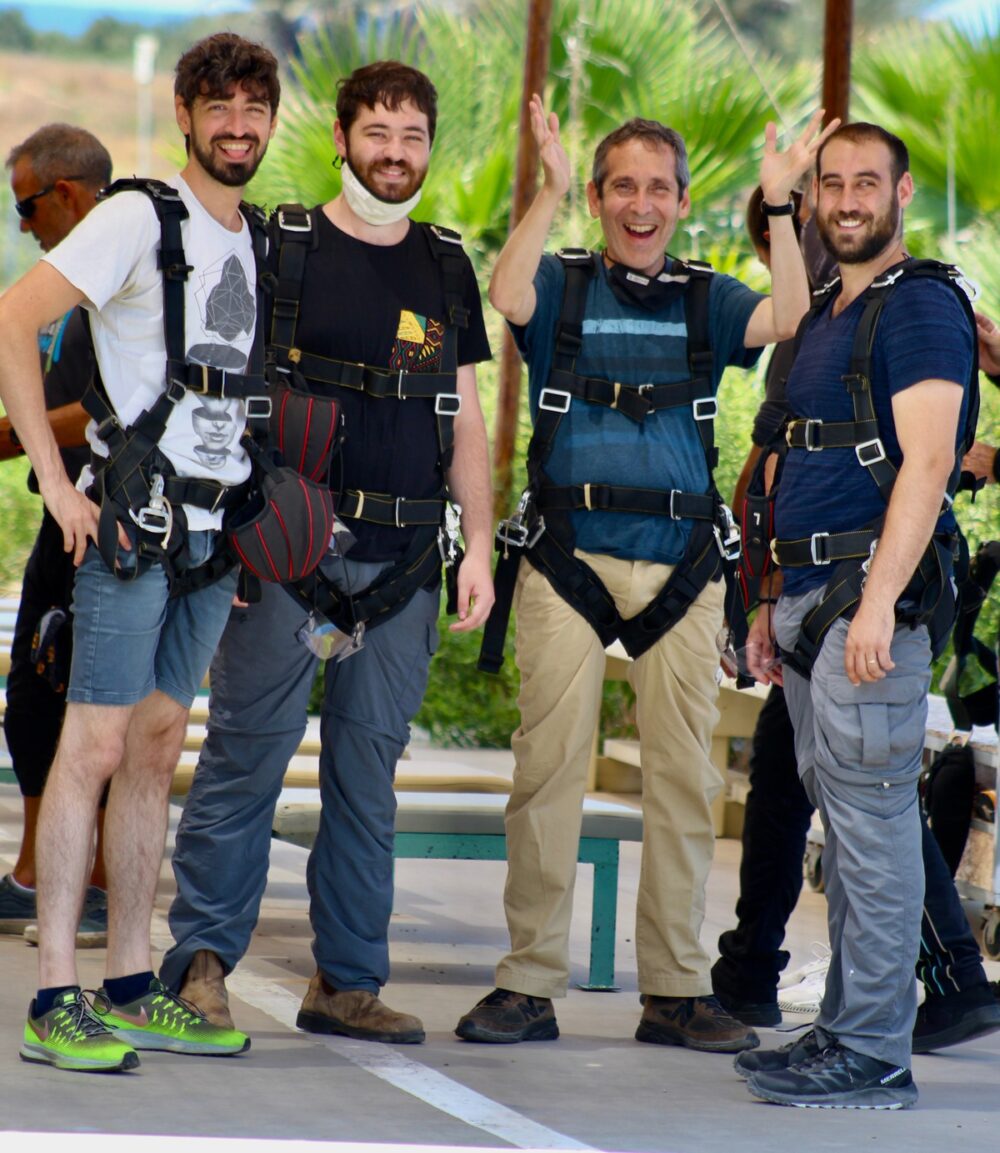 These days, nearly all skydiving for the layperson is done via a tandem. The instructor is literally attached to your back and pulls the ripcord. The freefall is not seven seconds but a full minute before the chute opens.

In Israel, tandem instructors must make between 1,000 and 1,500 jumps before being certified.

My instructor, the affable Arad Ben David, pulled out an altitude watch as we were plummeting earthward. We dropped 9,000 feet – that’s nearly two miles – in 60 seconds. Our speed: 120 miles an hour.

When I went skydiving 40 years ago, in the days before tandems, I had to push myself out of the plane.

“Jump!” the staff member in the plane commanded.

“No!” I screamed back at the top of my lungs.

“You have to jump now, or you won’t be over the target.”

I was in the process of shaking my head when I was then unceremoniously pushed out.

With a tandem, you don’t have to make that call – Arad was in charge. Still, the first seconds are terribly disorienting. I think we spun around a few times. The noise from the wind is intense, and it can be hard to breathe at that speed and altitude.

Tap on the shoulder

About 10 seconds into the drop, Arad tapped me once on the shoulder. That was the signal to spread my arms like a bird. I arched my back, as I was told to do during the preparation on ground, and surveyed the view. I guess all that pandemic year yoga paid off.

The scene is just incredible – the Mediterranean coastline, the bathers at HaBonim beach. On a clear day, you can see all the way to Lebanon, to Mount Hermon and maybe sometimes even into Syria.

The truth is, other than the first terrifying seconds, where you really feel the drop, you don’t experience the pull of gravity for the rest of the freefall. And when the parachute finally opens, it’s almost a letdown – you go so slowly from that point on.

Our landing was perfect. During my youthful skydiving experience, we had practiced rolling when we hit the ground, but it snuck up on me too fast and I plopped straight down on my tush, sending a shock to my spine that lasted a few painful weeks.

This time, I held my legs in the air and Arad landed standing up while I was essentially in his lap. I didn’t feel a thing. 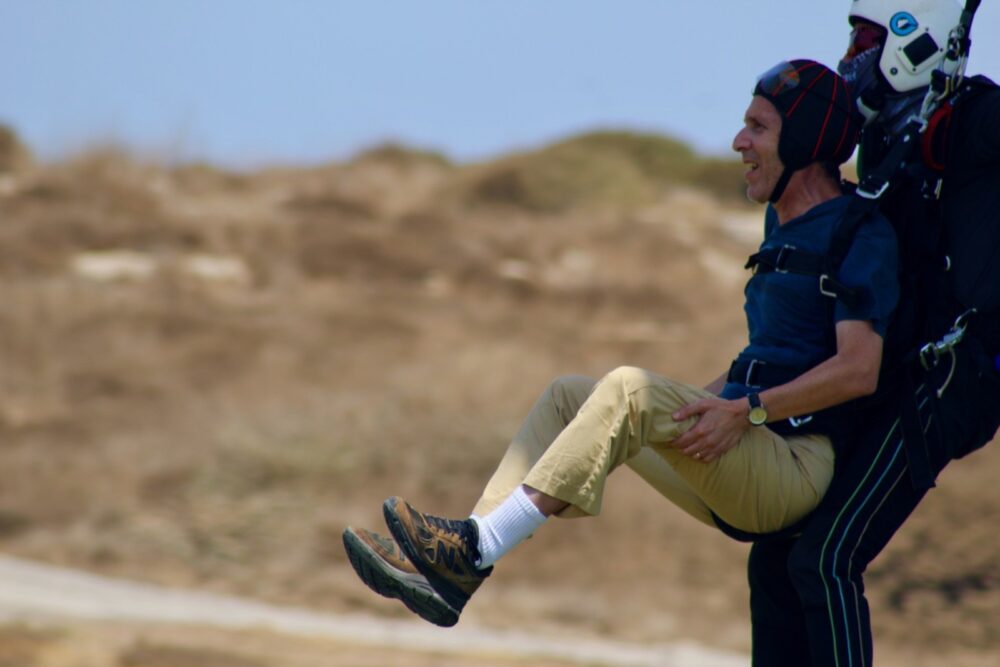 Israel is a skydiving paradise. It starts with soldiers in the paratrooper units who, upon their release from the army, want to continue jumping.

The Israeli Skydiving Association stresses that Israel is known for having the strictest skydiving regulations in the world. 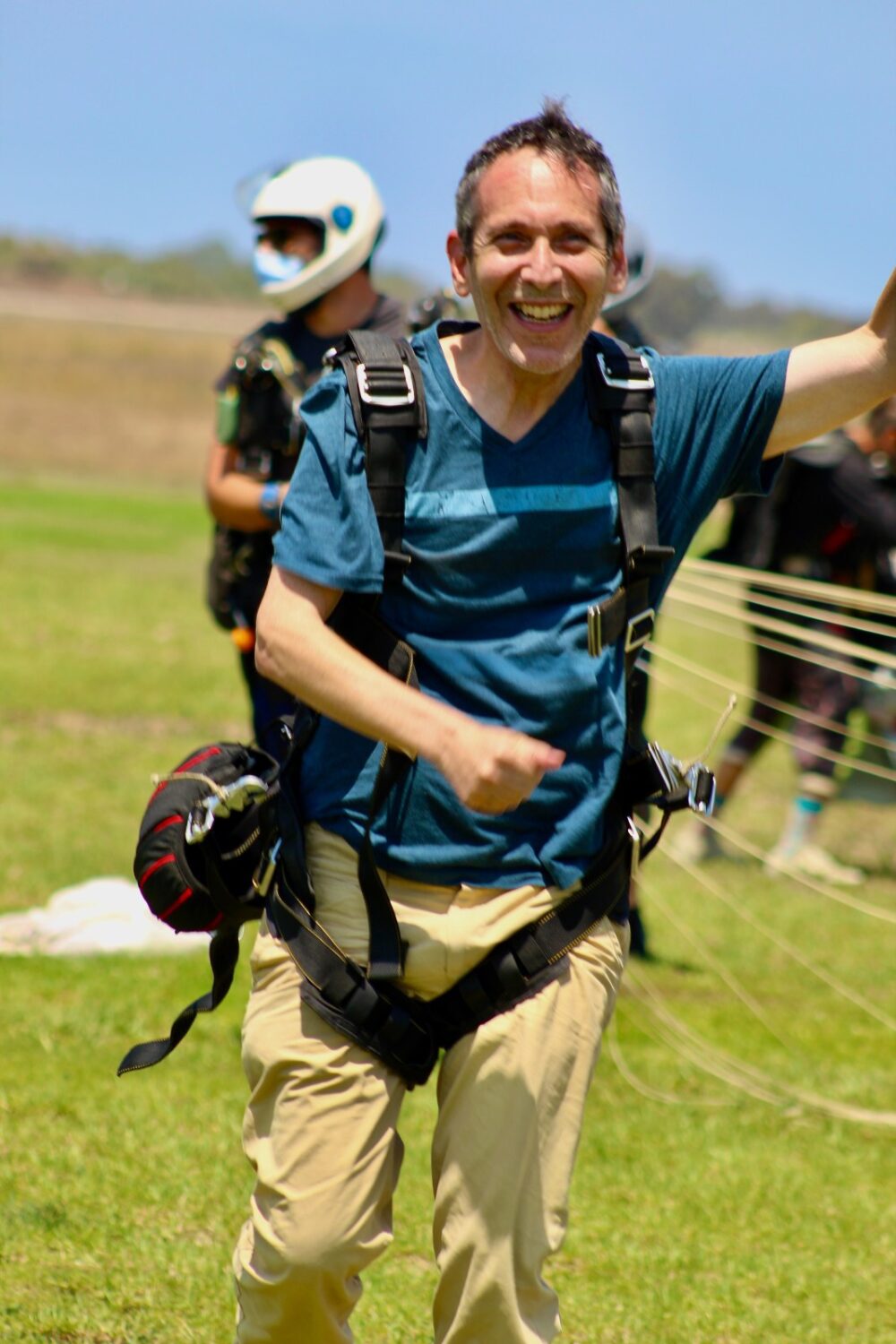 A jubilant Brian Blum after his tandem skydive at Paradive. Photo by Merav Blum

Paradive and all the skydiving centers in Israel offer a photography package that’s almost as expensive as the jump itself. A second skydiver launches at the same time as you to take amazing footage.

Skydiving is not cheap: nearly 1,500 shekels per person (about $460). You can cut a couple hundred shekels and 20 seconds off if you only go up to 12,000 feet. We received a 25 percent discount for birthdays.

Would I do it again? In a heartbeat. It was the most exhilarating yet petrifying thing I’ve ever done – even scarier than flying inside a commercial airliner in the midst of a pandemic.

Paradive takes strict Covid-security precautions: We all had to wear our masks prior to the jump.

Here are a few other skydiving centers in Israel to check out:

This is the only other skydiving facility located along the Mediterranean, close to Kibbutz Shomrat north of Haifa. Prices start at 790 shekels ($245) for 11,000 feet with a 50% discount for a second jump. Sitar Gur, one of the instructors at Hazanhaniyh, says an average of three couples a week get engaged while skydiving.

GoJump offers extreme thrills over the Dead Sea with the towering cliffs of Masada as the backdrop. You don’t get as high up in the air as at Paradive or Hazanhaniyh because the Dead Sea is the lowest point in the world! With 45,000 tandem jumps under their belts and reasonable prices — 850 shekels ($260) for a 50-second freefall — the Dead Sea beckons. GoJump is owned by the Hazanhaniyh group.

The plane at SkyKef is a little different than the others in Israel: Instead of pushing off a side door while sitting, you take a running jump out a big open space at the back of the plane. SkyKef is located near Beersheva, affording views of the vast Negev desert. Prices start at 899 shekels ($277) for 10,000 feet and a 50-second drop.

Two companies in Israel offer options that are less extreme but still a blast.

Extreme Israel’s specialty is “powered parachute flights,” a combination of an ultralight sports aircraft with a cart, motor, fan and wheels, with a parachute on top. It’s more akin to paragliding than the intensity of a full-on chute drop. The vehicle takes off from the ground rather than from a plane.

The craft is rather slow, company founder Sharon Baram told ISRAEL21c. “This makes it the safest of aerial vehicles.” Baram usually takes off from the Netanya area, but you can arrange to fly over some of Israel’s most famous heritage sites. It’s suitable for ages six and up.

You don’t even need a parachute to fly with Flybox in Rishon LeZion. Participants are blasted with air in an indoor “vertical wind tunnel” that allows them to levitate in a sealed glass box. This option isavailable for ages four and up and it’s cheaper than the real deal: just 289 shekels ($90) for two 120-second flights.