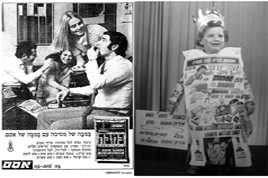 Valentine’s Day wasn’t invented by greeting card companies. However, its widely accepted that this relatively minor holiday gained in stature once it was gussied up with hearts, flowers and chocolate boxes. Similarly, tonight’s relatively minor holiday of Tu b’Av has, in recent years, become the occasion for summer lovin’ in Israel, celebrated with dance parties, romantic gifts and… pink, heart shaped Bamba? 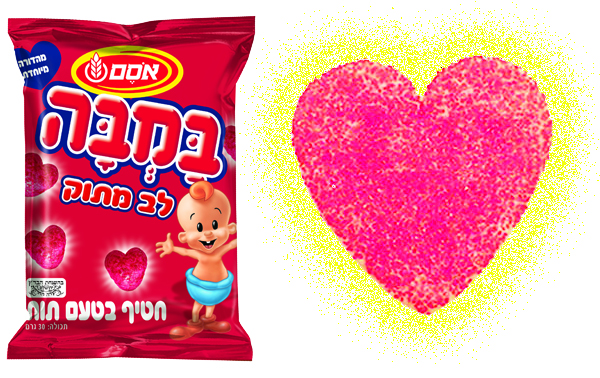 Bamba, for the uninitiated, is a baked puffed corn snack with a peanut coating and fortified with vitamins and minerals (A, B1, B3, B6, B12, C, E, folic acid (B9), sodium and iron, to be exact).

According to manufacturer Osem, Bamba is the number one selling snack in Israel, with 90% of Israeli families purchasing Bamba on a regular basis. It has a 25% share of the Israeli snack market with one million bags of Bamba produced daily at Osem’s Holon facility. 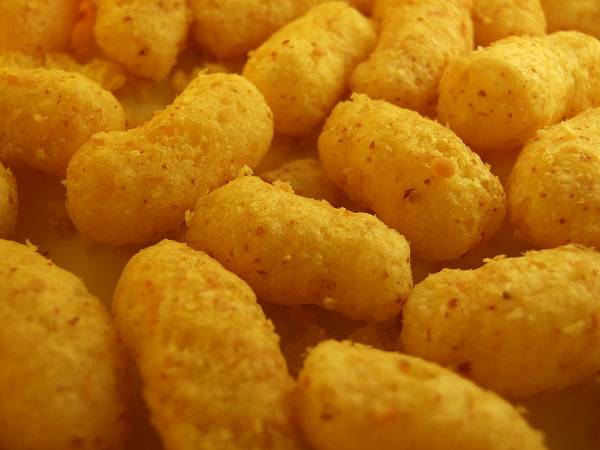 Bamba was launched in 1964 as a cheese flavored snack but that didn’t suit the Israeli palate. In 1966, the peanut flavor was devised and released. Since then, sales of Bamba have never declined.

Osem has always marketed Bamba to all age groups, stressing it’s perceived health benefits to parents (an  Israeli friend once commented that “when I eat Bamba, I feel like I’m eating health, because of all the vitamins”), while at the same time touting it as a fun party “nosh” — which is closer to the truth. 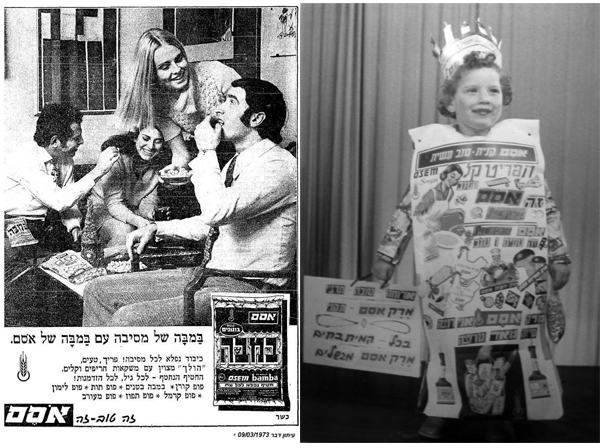 According to a 2007 Jerusalem Post article, Bamba sales received a boost in 1967 during the Six Day War when the Shekem chain of army canteens carried Bamba “and soldiers loved it so much they took it home to share with their families.”

Also according to the Jerusalem Post, during the run-up to the second Gulf War, “…on March 27, 2003, the Knesset declared Bamba a vital staple food, meaning that workers at the Bamba factory in Holon would receive call-up orders to produce Bamba, just like soldiers. ‘We see the Bamba factory as vital, just like a bakery,’ said then-Labor Ministry official Nahum Eido.”

What accounts for this staggering popularity? The addictive properties of peanut butter, for one thing (Bamba contains 49% peanuts). Salty-sweetness, for another. Plus, the consistency of the corn puffs — crispness that turns quickly into mush in one’s mouth — is perfect for teething babies. Israeli babies, you should know, are weaned directly off the breast and on to Bamba. The name itself, created by ad man Ofer Golan of the Ariely agency, was intended to mimic baby talk. Small wonder that the first three words out of most Israeli kids’ mounts are: “imma” (“mama”), “abba” (“daddy”) and — you guessed it “Bamba”.

Strawberry-flavored Bamba, a sweet version also known as “Red Bamba”, was launched in 1980. The company calls it “the ideal solution for Bamba cravers who are allergic to peanuts” and stresses that it uses a natural coloring derived from beets.

Not all Bamba initiatives have been successful. A Bamba-flavored breakfast cereal was launched in 2004 and discontinued two years later. Attemps by Osem in the mid-90s to launch Bamba in the US were stymied by warehouse contamination. Time passed and Osem — reinforced by its partnership with Nestle — is now marketing Bamba internationally.

The Bamba Baby mascot was first presented in 1992, and since 1993 it has been integrated into all of Bamba’s commercials together with the slogan, “Ein kmo Bamba” — “There’s nothing like Bamba”. Although he started out as a 2D cartoon, the Bamba Baby evolved into a 3D animation. As celebrities are wont to do, he was embroiled in controversy when, during the 2012 Olympic Games, despite being a commercial character, he was selected as the Israeli team mascot. (He was actually second choice – the full story was reported on by Israel21c and is available here).

The Bamba Baby providing relief from peanut sensitivities? This stuff may turn out to be a health food after all.