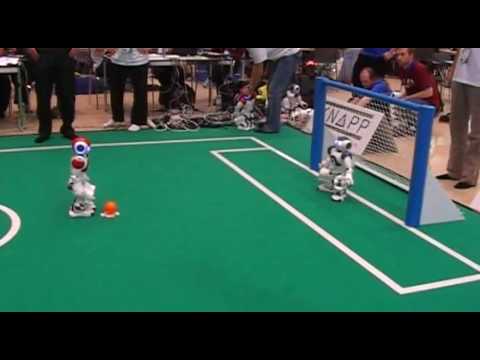 Israel may not have been able to enter a soccer team into the World Cup, but it did get picked for the world cup in soccer robotics.

It’s a goal! Excitement mounts as one of Israel’s robotic soccer players heads down the pitch.

The Israeli national team didn’t make the cut for this year’s World Cup soccer tournament, in fact they’ve only made the cut once — in 1970. But that doesn’t faze Israelis who are more known for their high tech prowess, over sport, any way. Using their brains instead of brawn, a group of Israeli researchers and their students headed to Singapore for six days in June to coach their own kind of soccer team — one made of robots at the annual RoboCup tournament.

They might not have won the prestigious tournament, but in the good spirit of robotics and diplomacy the team played against Texas and Austria, practiced with Turkey, and was even invited to come with their robots to Iran.

It’s the second year that Israelis have been invited to the robotic soccer league, the Robot World Cup, which pits robots from different universities around the world against each other. Going in with an advantage, making the cut among only 24 teams from around the globe, Israel’s Team BURST from Bar Ilan University had to deal with a “repository” failure calling on their human support team to race around the clock trying to fix the robots before kickoff.

In the end the Israeli university team placed nowhere near the top, yet “we scored a goal,” boasts Dr. Eli Kolberg, on the committee of the RoboCup league, and researcher at Bar Ilan University. He also escorted a junior high school team from Holon, Israel, which won a robotics dance competition.

Playing with plastic, chips and brains

The official team from Israel included four robots and 13 researchers from Bar Ilan, among who were 11 of the school’s best graduate students from the Department of Computer Sciences. Normally students don’t get access to the kind of classes that prepare them to build high-end robotics projects — especially ones that teach robots how to run, kick, head but and try to score penalty goals:

“One of the unique things about the robotics program at the Computer Science department is our emphasis on inclusion of undergraduate students in state-of-the-art research projects. There are very few universities in the world, let alone Israel, where undergraduate students can take regular classes, in which they face state-of-the-art research challenges in robotics,” said Prof. Gal Kaminka, a researcher at Bar Ilan University who heads the team.

The Israeli team of robots might not have the face of Beckham or the speed and balance of Pele, but they’ve got brains. And that’s the research teams’ tactic on the “field”. “The competition is really about programming the software brain that controls each robot,” says Kaminka. “Each robot has a camera, range sensors, a computer, and independent motion capabilities. They cannot rely on human intervention or guidance in any way or form. However, they can communicate with each other. 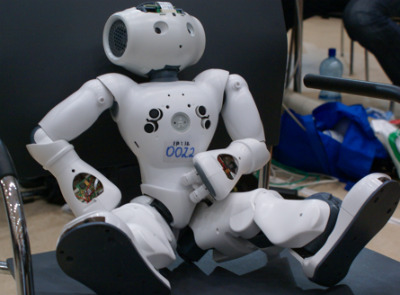 One of the ‘players’ takes a well-earned rest between games.

“There’s a very exciting story of which RoboCup is only a symbol, a front: the story of the birth of Israeli robotics in recent years,” he explains to ISRAEL21c. “This is reflected not only by academic efforts such as RoboCup, but also what is happening in the industry, with both large defense integrators as well as small start ups that are popping up,” he says.

An ER situation and “sports medicine”

“There’s a sense that the market is moving at an accelerated rate. I know that all of sudden, after years of having my PhD and MSc student graduate to jobs in larger companies, suddenly two of them are off to start their own robotics companies. One of them, Cogniteam, actually sponsored our team.

“This was a factor in my decision to open RoboCup to undergraduate students – an unusual decision, given their inexperience. I wanted to make sure that Bar Ilan is producing students with knowledge in robotics at a faster rate.”

Before the team arrived in Singapore on June 19, the Israeli BURST team was pretty confident of a win. But disaster struck almost immediately. “After a few hours of work during the first set-up day, we discovered that our code went through a meltdown,” the students wrote on their blog. 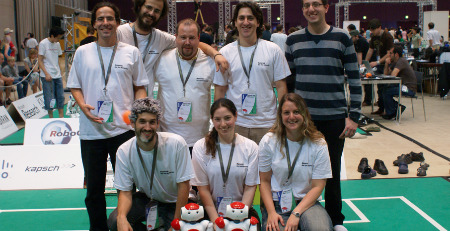 The Bar Ilan University robotics team, with their soccer team.

“Things that worked in the lab, no longer work. Repairs just seem to make things worse. We have been working 22 hours a day to stabilize the situation. Some of the students are falling asleep at the keyboard. The amount of caffeine intake is just astounding: The current rate is eight espressos for every 10 hours,” they lamented.

“What happened is our repository crashed – it’s the software – it’s complicated to explain but it’s working in several environments. We had to work hard in order to help the robots step up to a reasonable competition,” says Kolberg, who believes the robotics soccer league could one day compete against real human soccer players.

“On the third game we started making goals. But it was too late for us,” he tells ISRAEL21c. “The people – professors and faculty and students really understand what we’ve done in a short time and it was a great honor for Israel. It won’t be the last game we play,” concludes Kolberg, who reported a practice session against a Turkish robotics soccer team.

Next year, they’ll be back — hopefully for a win. If not in the real life World Cup, than with their robots.