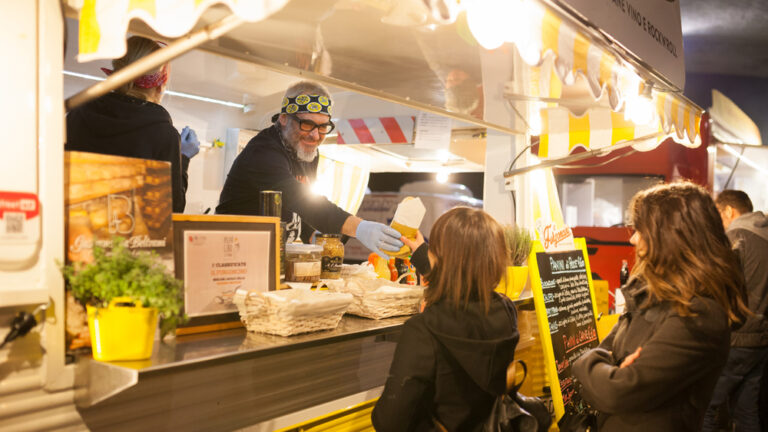 Food served by small trucks around the streets of Italy. Coming soon to Jerusalem. Photo by Shutterstock.com

Street eats on mobile food trucks are the rage the world over but somehow the craze has missed Israel. Now, the business development department of the Jerusalem Municipality and the Jerusalem Innovation Team (JLM i-team), are hoping to make food truck fare in the capital city a reality — come this summer.

“The initiative seeks to bring a commercial front to areas in the city where permanent infrastructure is currently deficient, serving as a lab for the future development of these areas, while giving participating restaurateurs a chance to reach new customers,” reads a statement.

“The Jerusalem culinary scene is renowned worldwide, appealing to visitors and residents alike,” says Mayor of Jerusalem Nir Barkat. “We want to bring restaurants to residents, workplaces and neighborhoods in order to connect Jerusalemites with their local businesses.”

In fact, street food in Israel is well known. But while food stalls continue to reign supreme, only special one-off events have featured food trucks. There are no food truck pods anywhere in Israel. Yet.

The municipality has announced a tender for AutoChef, the first food truck fleet in Israel, which aims to serve business and industrial areas during the day and create local pop-up events in neighborhoods in the evenings.

The JLM i-team is hoping to boost the capital’s economic development with a series of initiatives to strengthen entrepreneurs and small and medium businesses in the city.

“The spirit of innovation in Jerusalem has reached the culinary scene, strengthening businesses and enriching public space,” says Sharone April, director of the JLM i-team. “We are proud to be partners in the AutoChef initiative and eagerly await seeing neighborhood residents and people working in the city enjoying quality culinary, community and social events.”