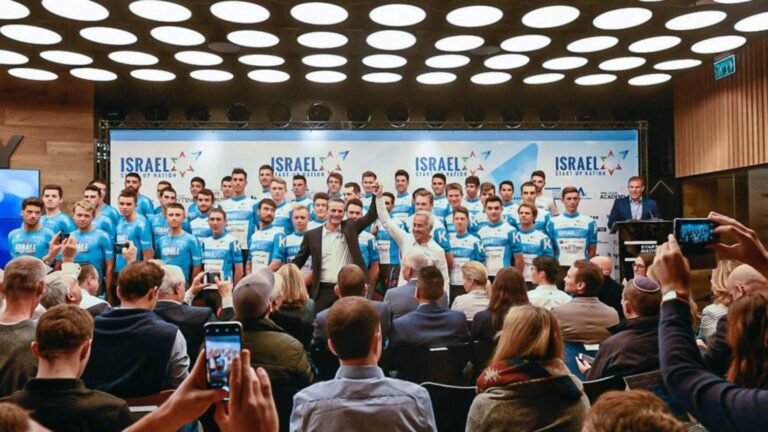 Israel Cycling Academy will ride in the 2020 Tour de France under the banner of Start-Up Nation Central. Photo by Noa Arnon

The Israel Cycling Academy will be first Israeli team ever to participate in the Tour de France. The 2020 race will start in Nice on June 27.

“The dream of competing in the Tour de France, almost unthinkable only five years ago when we launched the team, is now coming true,” said Sylvan Adams, the team’s co-owner.

The cyclists will ride under the banner of Start-Up Nation Central, a Tel Aviv-based non-profit organization that connects companies around the world to Israeli innovation.

“Our goal is to get Israel’s powerful tech ecosystem behind the cycling team, as it becomes a formidable competitor, and leverage the knowledge gained from testing these technologies on Israel Start-Up Nation cycling team to benefit other athletic teams,” said Prof. Eugene Kandel, CEO, Start-Up Nation Central.

Tour de France is the world’s third most watched sporting event, after the summer Olympic Games and the soccer World Cup.

“Around 3.5 billion viewers in hundreds of countries across the world will see the Israeli flag and hear the message that this is a country bringing unrivaled innovation to the world,” said Adams.

In addition to the partnership with Start-Up Nation Central, the ICA riders will continue to serve as Peres Center for Peace and Innovation “Peace Ambassadors,” a title they were bestowed in 2018. The center’s logo will appear on their uniform to help spread a message of peace and coexistence.

The team heading to Nice has 30 riders of 16 different nationalities.

The 2017 season was the team’s first in the second-tier Pro Continental ranks and in 2018 the team raced in its first Grand Tour – the historic Giro d’Italia, which started in Jerusalem. ICA raced again in the Giro d’Italia in 2019.