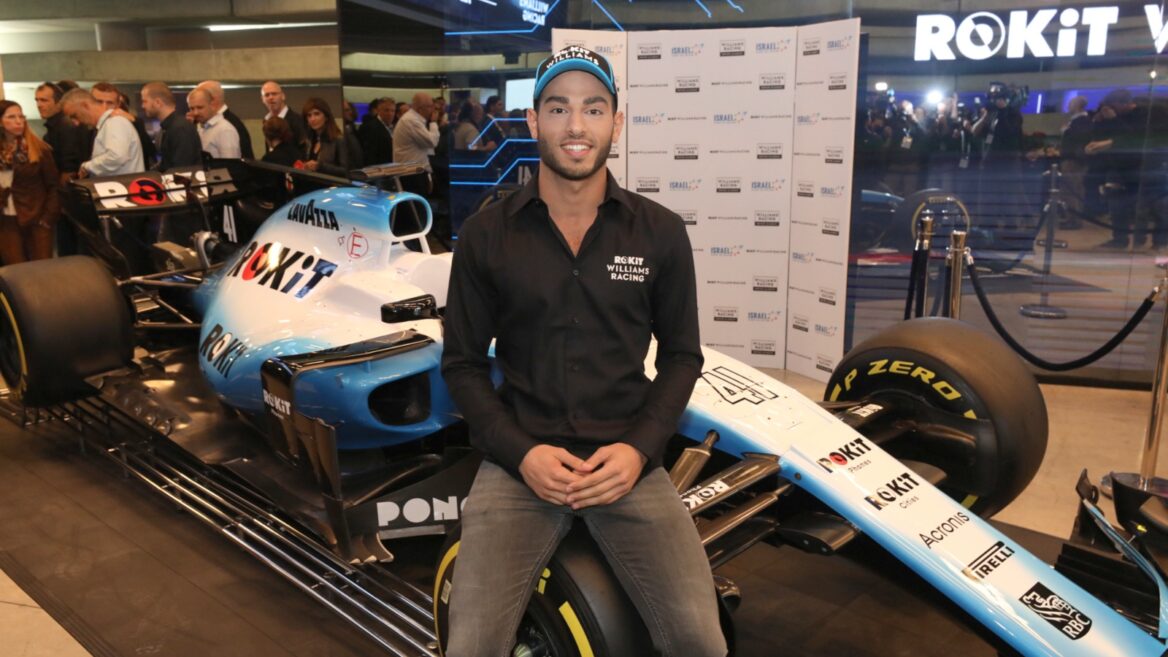 Roy Nissani, the first Israeli to be signed by a Formula One team. Photo by Shauli Lendner

On January 15, at age 25, Nissany signed a contract to become an official test driver for the UK-based Williams Group. ROKiT Williams Racing is one of only 10 Formula One teams in the world.

No other Israeli has ever reached F1, the highest class of single-seater auto racing sanctioned by the Fédération Internationale de l’Automobile (FIA). 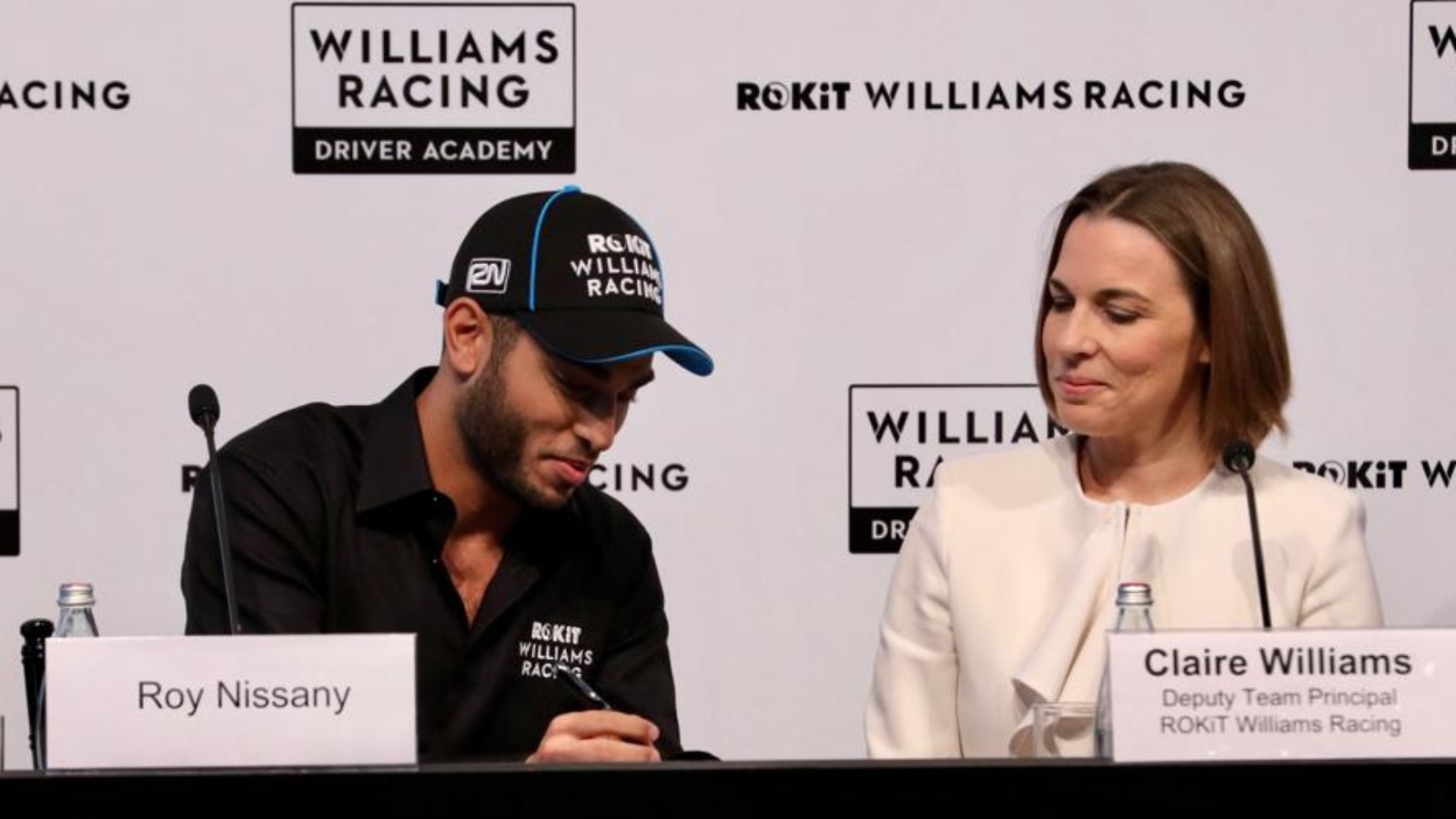 “I decided to dedicate my life to motorsports and racing. I set myself targets leading to Formula One,” said Nissany, who completed his first test in an F1 car with the Swiss team Sauber Motorsport in 2014. “Williams was kind of my idol so the feeling of joining this family is incredible.”

His self-assured declaration 17 years ago so impressed Gyárfás Oláh — a Hungarian karting champion and now FIA’s Off-Road Commission President — that Oláh became the Israeli boy’s personal manager to this day.

“We’ve done 350 races in around 20 countries, including 10 championships,” Oláh said, sitting beside his protégé at the press conference.

Nissany began motor racing at 14. He had 13 podium finishes in two seasons in Formula V8 3.5, two consecutive victories at the Silverstone track in UK, and wins at Italy’s Monza track, France’s Paul Ricard circuit and Jerez in Spain. He competed in the Formula Two championship in 2018, missing last season due to injury.

The Tel Aviv native has spent most of his life working toward his target in Europe, especially Italy, since there’s no F1 racing infrastructure in Israel. 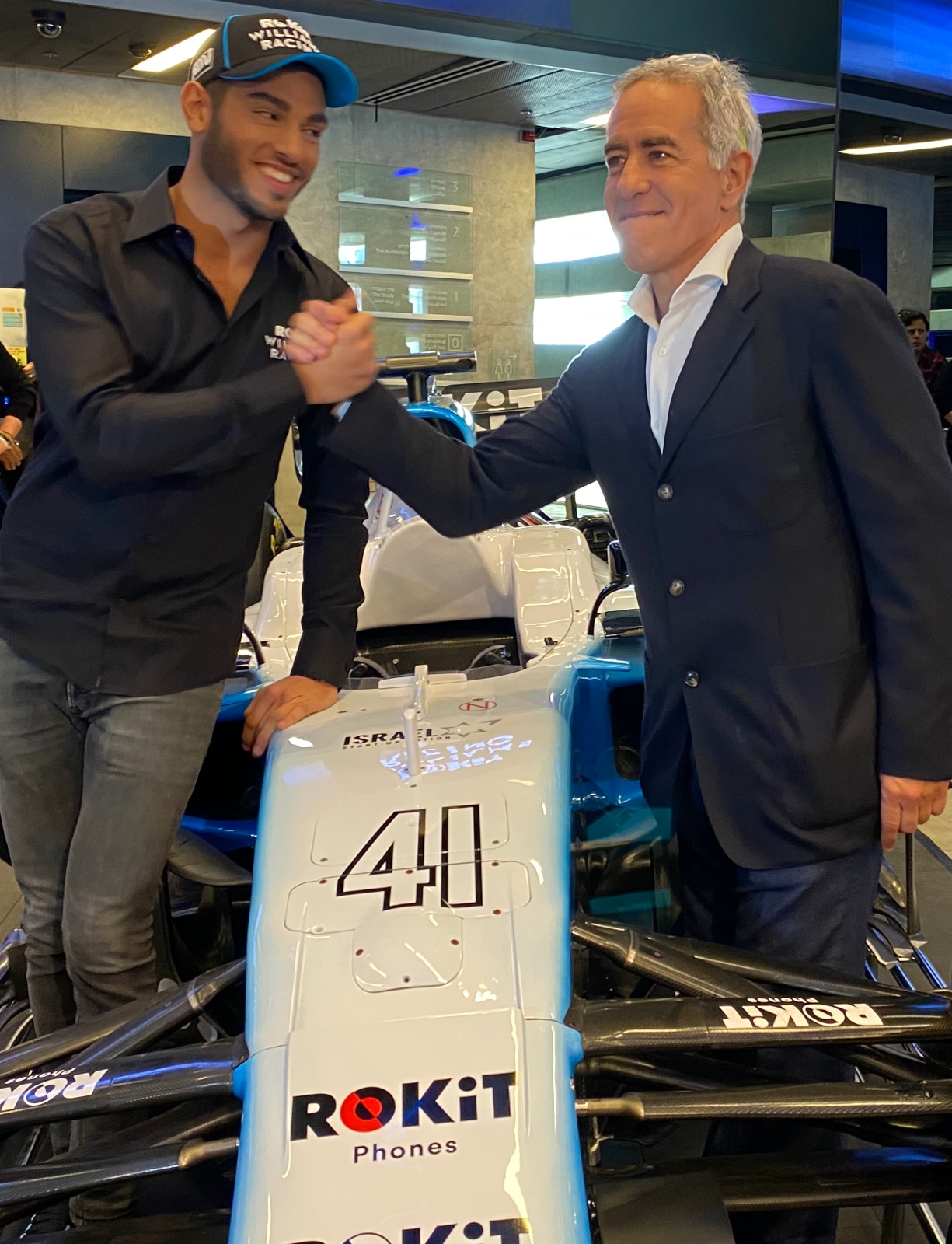 “Every driver has his individual style, whether it’s expressed in the driving itself or in his behavior as a sportsman,” Nissany told ISRAEL21c.

“The mentality and mindset that we have as Israeli sportsmen helps me to go forward and gives me some extra power in and outside of the car.”

“The fast-track plan is for Roy to be an actual F1 driver as early as 2021,” said Adams. “Of course, he has a few hurdles to accomplish before he can be selected to be one of the two drivers.”

Adams explained that F1 “is one of the most exclusive sports in the world. There are only 20 Formula One racecar drivers. The idea of seeing Roy and the Israeli flag every week or two — hopefully — being beamed to 350 to 400 million television viewers gives me goosebumps.” 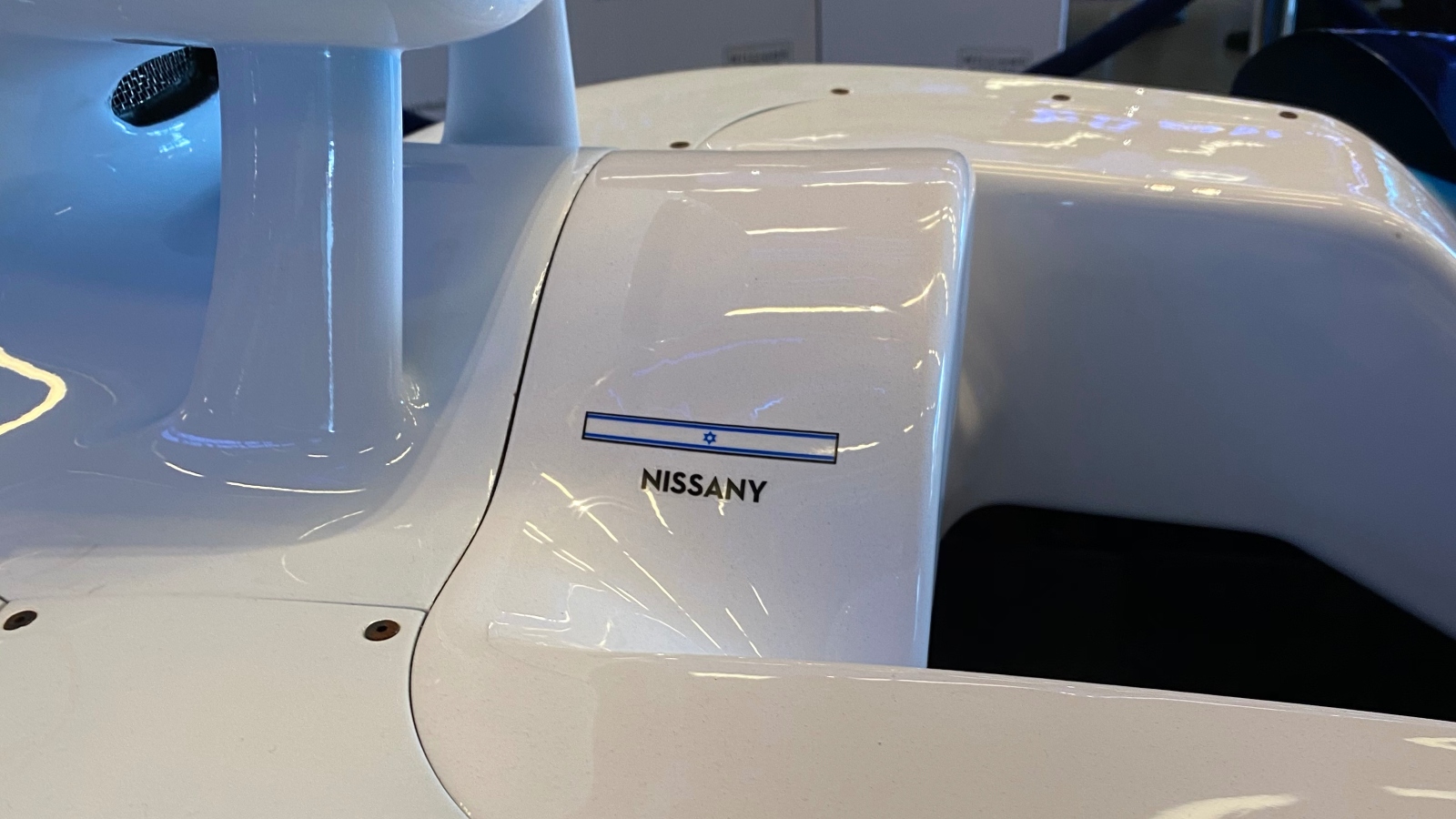 A closeup of the Israeli flag with Roy Nissany’s name on a Williams demo F1 racecar displayed at the Peres Center for Peace and Innovation. Photo by Abigail Klein Leichman

Nissany first approached Adams at an event of the Israel Cycling Academy, a professional team Adams co-owns. This June, the team of cyclists from different nations will compete as Israel Start-Up Nation in the Tour de France.

“The two Israeli Start-Up Nation cyclists, Guy Yaniv and Guy Sagiv, are also leaders on the international scene,” said Nissany. “We are, all together, putting Israel on the map in big events like the Tour de France and Formula One.”

Cycling, Formula One and Israeli innovation

Adams told ISRAEL21c that Israel Start-Up Nation is the third professional cycling team in the world to have an association with an F1 team.

“Mercedes has teamed up with INEOS and Bahrain has teamed up with McLaren. Our association with Williams will allow us to do engineering research together, for instance in aerodynamics and composite materials. There’s a lot of innovation we can bring to both sports and hopefully it will help us reach the highest levels.”

The Israel Cycling Academy’s collaboration with Start-Up Nation Central – a nonprofit that connects business, government and NGO leaders from around the world with Israeli innovation – is already introducing the latest advances in sports-tech to the team.

Adams also pointed out an innovation in the geopolitical sphere: At the request of the Williams Group, Nissany did two days of test driving in Abu Dhabi in December. His flawless performance there clinched his position as the team’s third test driver.

“An Israeli test driving in Abu Dhabi would have been unthinkable three years ago and now it’s the new normal. It proves that through sport we’re building bridges,” said Adams.

The road from test driver to F1 driver

But his main task will be simulated drives to help Williams engineers fine-tune their racecars. 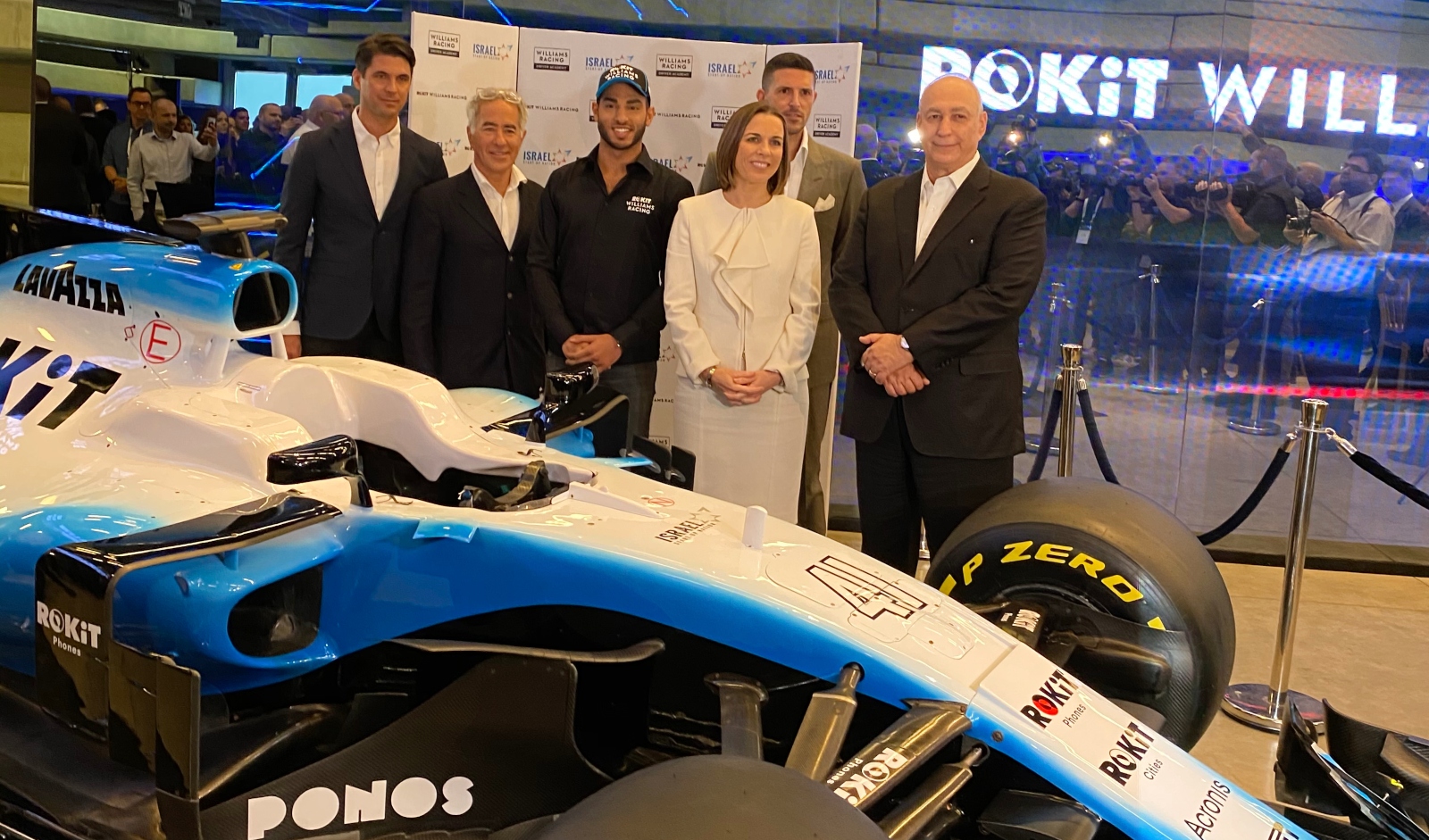 “The simulator work is absolutely mission critical for us,” said Marc Harris, head of the Williams Young Driver Academy.

“Our development drivers play an increasingly important role in how we develop our car. Roy will evaluate how the car reacts to various situations and how it behaves when we put new pieces of technology into it. Roy will be fully immersed in races, briefings, engineering, media and marketing. It’s a great way to understand the role of a driver in a Formula One team.”

“Israel is an inspiring nation and one that has extraordinary vision and innovation,” Williams said to Peres. “Having the global stage that Formula One offers will only showcase the country in a greater way and Roy will be an ambassador for Israel and an inspiration for the younger generation.”

Adams put it a different way: “Israelis are winners, and Williams believes in Roy because he is a winner.”