Newly hatched loggerhead turtles make their away across the sand into the sea in the southern Israeli city of Eilat. Photo courtesy of Omri Omessi/INPA

Some 20 tiny loggerhead turtles recently made history when they became the first of their endangered species to be documented hatching on the beach in the southern Israeli city of Eilat before quickly making their way into the Red Sea.

Experts are left wondering why their mother decided to lay her eggs there.

“Loggerhead turtles are a species that hasn’t been seen here in Eilat. There was one that was seen a couple of years ago, a very young turtle that we couldn’t understand where he came from,” explains Omri Omessi, a ranger in the marine unit of the Israel Nature and Parks Authority.

However, research shows that turtles return to the beaches on which they hatched.

“It might be that this turtle hatched here decades ago and came back, making it all the way to Eilat’s beaches to lay her eggs.” One or two of the turtles are expected to survive their lengthy journey to the shores of Sudan. Photo courtesy of Omri Omessi/INPA

And yet, despite her possibly arduous journey, the mother turtle came very close to not being able to lay her eggs as planned.

“A few young people out on a night of fun found the turtle on the beach, and they thought they were doing something good and put her back in the water,” Omessi says. “It made us very worried about the turtle, hoping that she wouldn’t accidentally lay her eggs in the water, since eggs that are laid in the water can’t hatch.”

Happily, during the next few days INPA found signs that the mother had returned to the beach, looking for a place to lay her eggs. 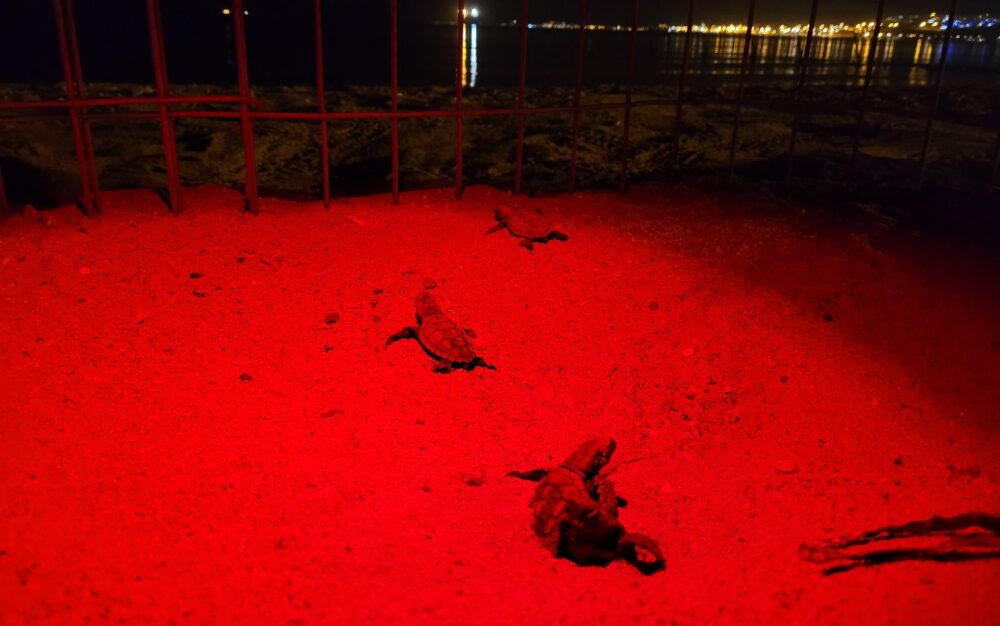 One of the turtles that hatched in Eilat could return in decades to come to lay her own eggs. Photo courtesy of Omri Omessi/INPA

“We managed to locate the nest, meaning that she laid the eggs and that everything was fine, but the nest was in a place that wasn’t ideal and we therefore decided to move it,” Omessi says.

“There aren’t many beaches left in Eilat that are suitable for laying eggs anymore,” he notes. “There’s the promenade, there are built-up areas, irrigation, drips, lighting, and many other things that aren’t ideal.”

Since loggerhead turtles lay eggs in an average of two nests within a timeframe of 10 to 18 days, all those in the know were on the lookout for another nest, which they did indeed find in the same area. This nest too was relocated, and its occupants are expected to hatch within two weeks.

Those already hatched are now making their way down the Red Sea after being photographed very carefully.

“One of the things that we’re really strict about is light pollution. If there’s light on the beach, the turtle might not go into the water but to the light. All the photos were taken using infrared lighting; that’s why they’re a bit reddish,” Omessi explains. Light pollution can confuse and endanger the newly born turtles, meaning that only infra-red light was used in their surroundings. Photo courtesy of Omri Omessi/INPA

A long way to go

Omessi stresses that people can only help the newly hatched turtles until they head toward the sea. “We’re hoping that one or two of them manage to survive,” he says.

“They have a long way to go. It’s not their habitat so they’re probably going to swim down the Red Sea, cross the Straits of Tiran and reach the area of Sudan, where they will grow, develop and perhaps one day return to us,” he notes.

The fact that the Eilat-hatched loggerheads will likely live in Sudan is not surprising, Omessi adds, because the turtles have three distinct areas: one that they reside in, another one that they mate in and another one where they lay their eggs. For this particular mother turtle, it would seem that the hatching area is Eilat.

Omessi isn’t quick to point to climate change or other environmental factors as possible explanations for the unique occurrence.

“Climate change is very worrying, on every scale. But to say that this turtle arrived here because of it – I don’t know whether we can tie between the two things,” he says.

Omessi didn’t get the chance to meet the mother turtle but has a request of anyone who does bump into a turtle on the beach, or indeed into any wild animal.

“It’s very important to guide the public, especially in light of this most recent event of the good people who just wanted to help and put the turtle back in the water. If you come across a turtle on the beach, or a wounded wild animal, don’t do anything – just call the authorities. We’ll get there and help the animal as best as we can.”

UNCOVER ISRAEL - Get the ISRAEL21c
Weekly Edition free by email
Sign Up Now!
Bring Israel's story to life.
Millions of people around the world rely on us to gain a deeper understanding of Israel. We are the trusted source for original content you won't find anywhere else.
You can make a difference. Donate today to support journalism that brings Israel’s story alive.
SUPPORT ISRAEL21c
Read more on:   Spotlight on Israel, Environment, endangered species, turtles, Israel Nature and Parks Authority