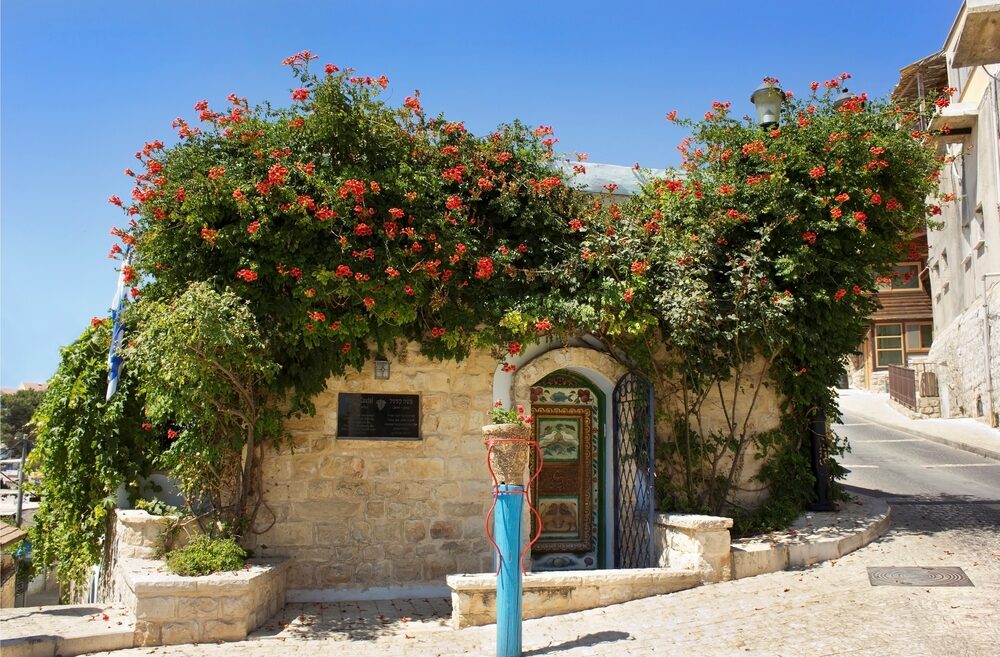 An old house in Safed, where Israeli artist Moshe Castel once lived and worked. Photo by Shutterstock

Something special in the air of Safed (Tzfat) sets the city apart from any other.

Maybe it’s the altitude, at 900 meters (2,952 feet) above sea level. Maybe it’s the Jewish mysticism that took root here in the 16th century and still flourishes. Or maybe it’s the magnificent views.

From this 15-square-mile city in the mountains of Israel’s Upper Galilee you can see east to the Golan Heights, north to Mount Hermon and Lebanon, west to Mount Meron and south to Tiberias and Lake Kinneret (Sea of Galilee).

People from across the world visit Safed to soak up its homegrown art, music and spirituality.

For a general overview, you can find short videos about Safed tourist sites here.

Safed is considered the leading place in the world for Jewish art.

Many of the studios are situated in the cobblestoned Jewish Quarter of the Old City.

According to local resident Yosef Stepansky –a field archaeologist, researcher, lecturer, certified tour guide and author of four books about Safed and the Galilee — Safed has the best-preserved Jewish Quarter in the world.

Here are a few top spots to get you going. 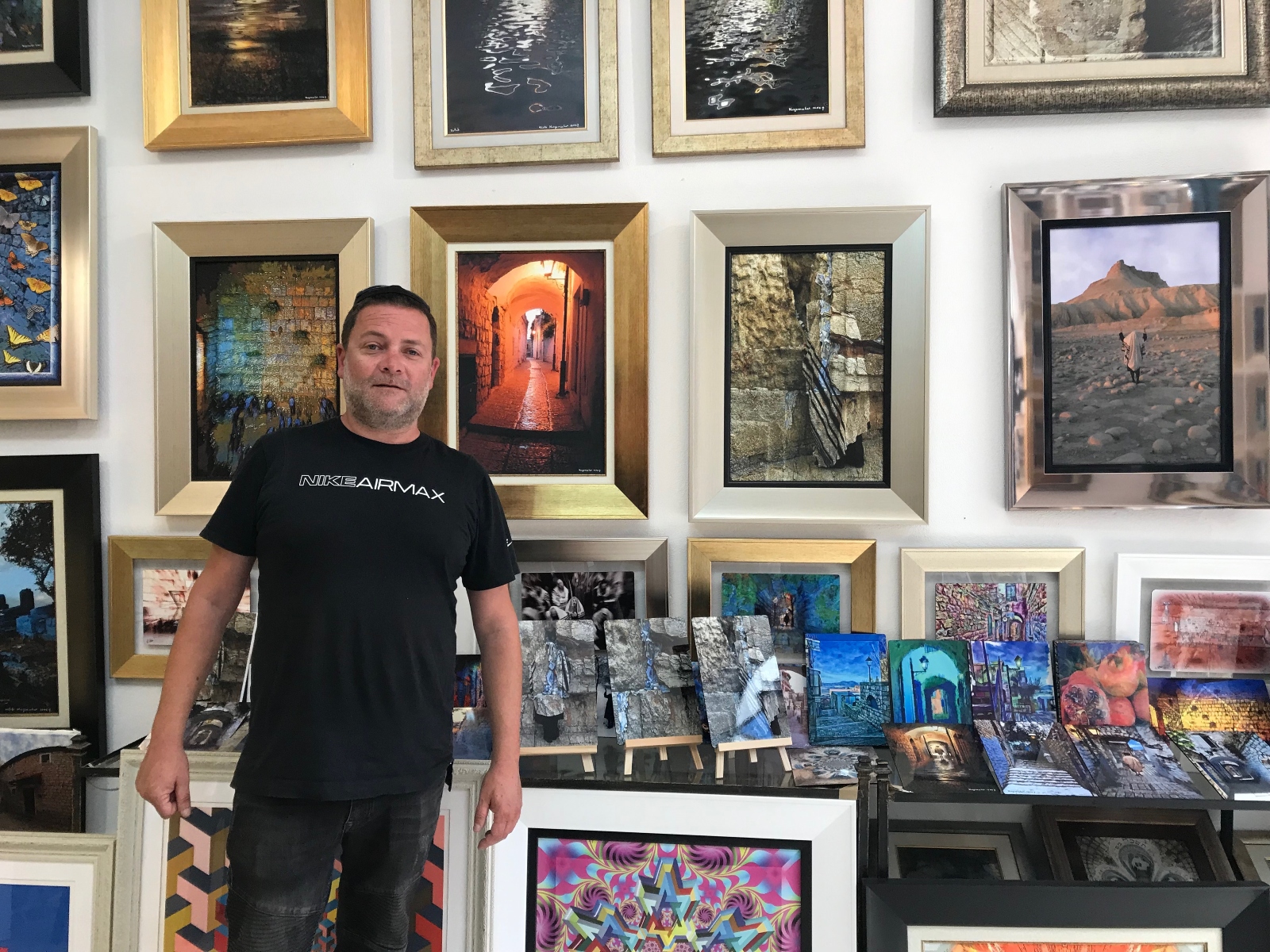 In his mid-30s, he felt a calling to go to Safed. He became a Hasid and turned his talents to mystically infused art capturing the unique people and landscape of his adopted city. His works have been sold and exhibited across the world.

Following his death in 2011, his son and protégé, Mordechai, took over and expanded the business. One-of-a-kind paintings, prints and photographs are available. Click here for a virtual 3D tour of Kaszemacher Gallery. 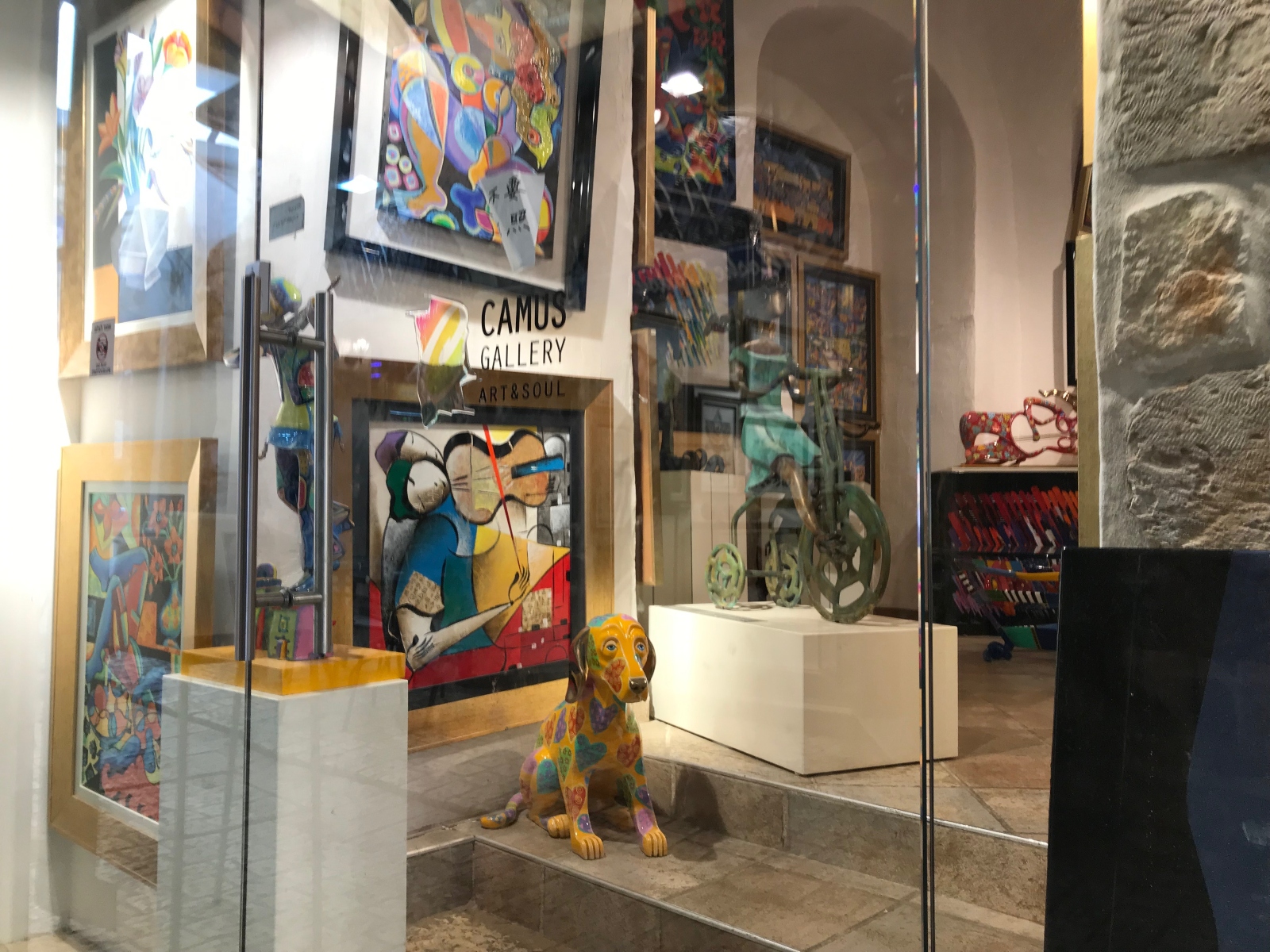 The Camus Gallery – really four galleries in one restored 500-year-old stone building — was established in 1995 by Tomer Camus, an 18th-generation Safed native.

He and his wife, Ketti, are accomplished artists in their own right and represent other Israeli artists and artisans such as Ayala Bar, Calman Shemi, David Schluss and David Gerstein.

After perusing the large variety of paintings, ritual objects and modern sculptures, ask for a personal guided tour of the fascinating space. 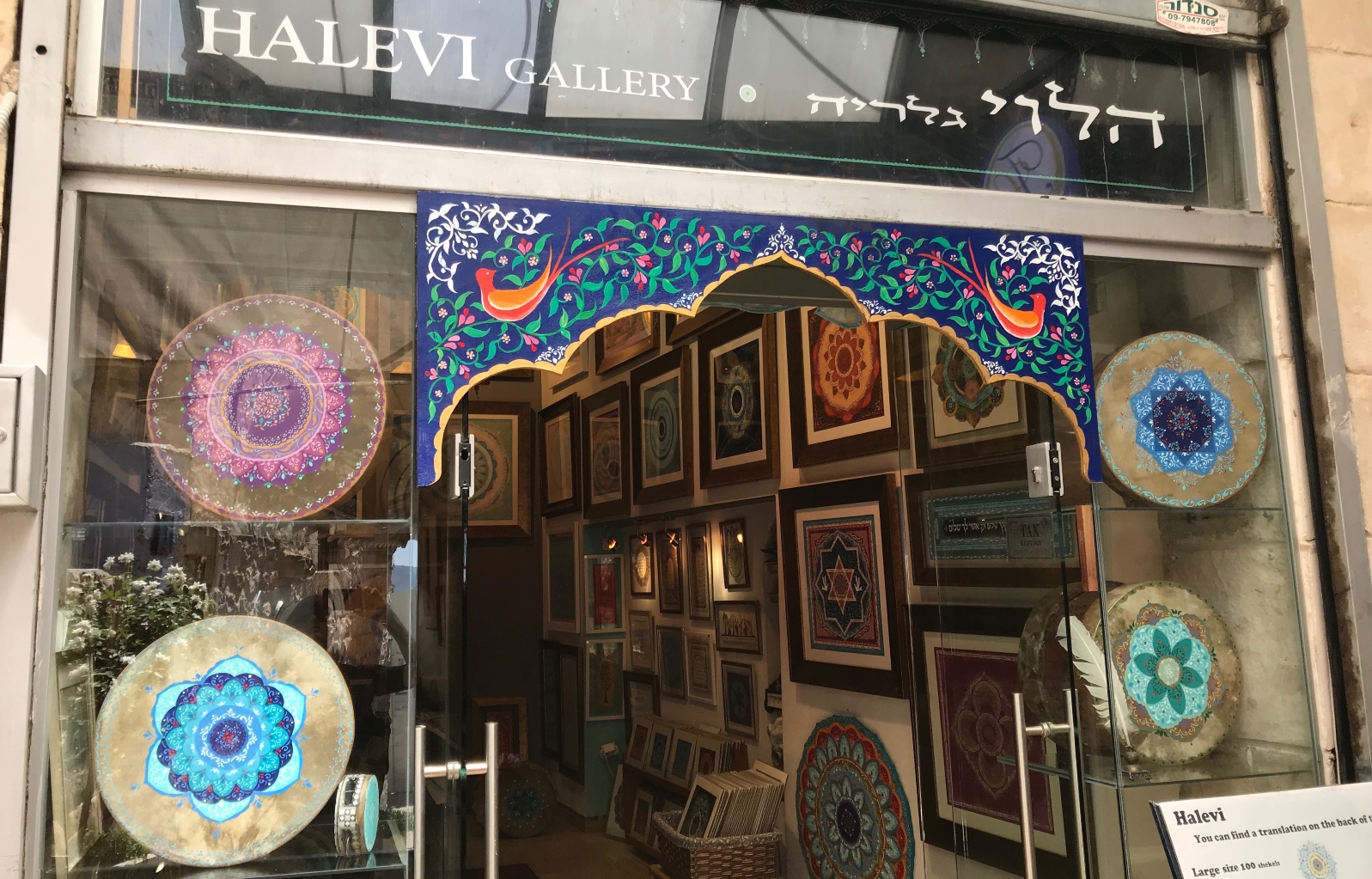 Another local artist couple, Efrat and Gonen Halevi, create Judaica using a digital version of the French Giclee (“ink splashing”) method in which more than four million tiny drops of paint per second are sprayed on fine art paper. Each print is protected by ultraviolet layers.

In their mandalas, calligraphy and unique painted drums, the Halevis use combinations of 512 different colors.

“We make peace between the ends of the shades of color, between the blue and the red, the green and the orange, the black and the white, until we reach harmony.”

Sheva Chaya’s wedding glass: break it under the chuppah, send it back and have the shards made into a new item. Photo: courtesy

Shaiman’s popular handblown wedding glass comes packaged with a padded envelope to ship the broken pieces back to her after the glass is broken by the groom. 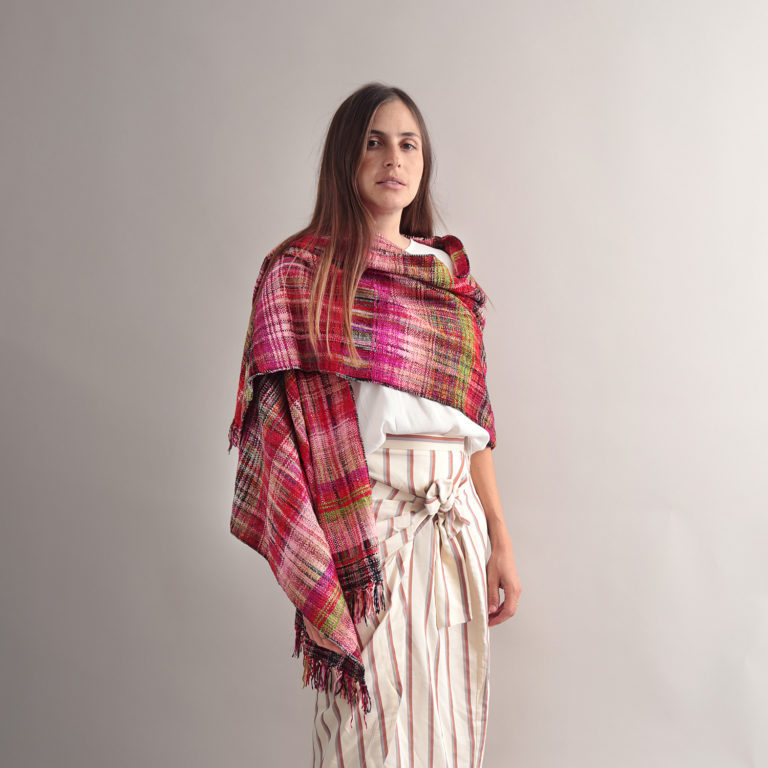 This is your address for handwoven fabric art from prayer shawls to scarves to tapestries. Established in 1992 by Yair and Orna Mor, Canaan Gallery boasts a team of 12 talented craftspeople.

Groups of three to 20 people can book a live demonstration and explanation of weaving on hand looms in the studio, and then participate in weaving a fabric embroidered with the name of the group or family.

A DATE WITH HISTORY

Stepansky says archeological evidence suggests an ongoing human presence in Safed since 2000 BCE. Here are some highlights of history to explore.

Take a picnic lunch to the hilltop Citadel Park, the highest point in Safed.

Crusaders conquered Safed around the turn of the 12th century and built their first castle fortress here. Subsequent conquerors occupied, renovated and finally abandoned the fortress after an earthquake in 1837.

Today, you can see parts of the Crusader structure that have been excavated and preserved.

In 1951, the city made a park with hiking trails around the Citadel along with a monument memorializing Jewish soldiers who fell in Safed during the War of Independence. At the park’s entrance is an audio stand where you can hear explanations of the history of the Citadel. 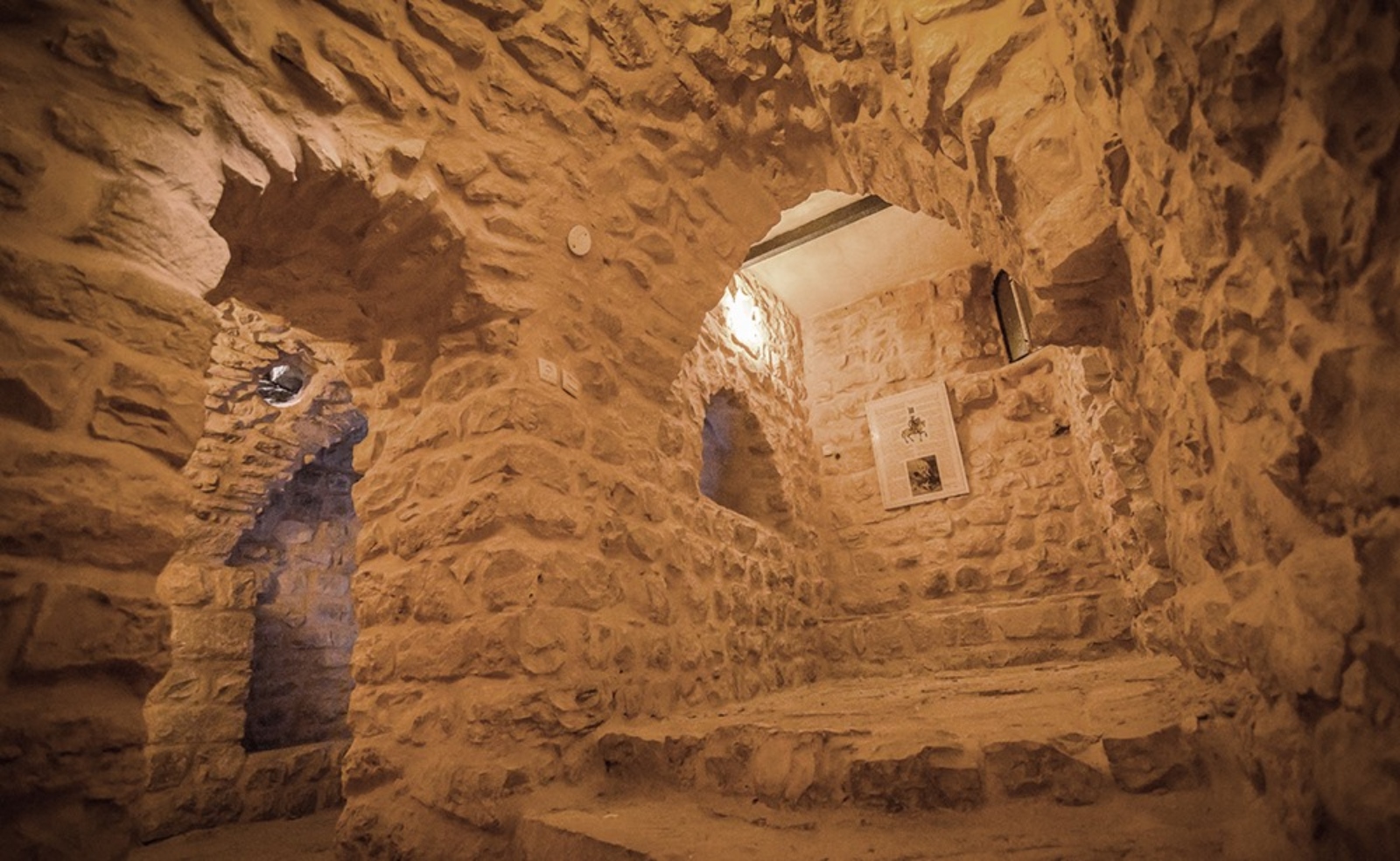 This National Heritage Site in the city’s Jewish Quarter takes you down to levels where residents lived in underground buildings 500 years ago.

Now part of the complex owned and operated by nonprofit educational institution Livnot U’Lehibanot, Kahal contains the remains of private homes with water systems, plus communal structures including an oven room and a mikveh.

Several very old, still functioning synagogues in Safed testify to the arrival of Jews after the 1492 Spanish expulsion. Among them were prominent philosophers and poets who developed kabbalah, the Jewish mystical tradition.

If you have to choose one to visit, go to the 16th century Ari Ashkenazi Synagogue. “Ari” (lion) refers to Rabbi Isaac Luria, a kabbalist arriving in Safedin 1570.

Guides will tell you the amazing story of worshippers’ survival of an attack on the synagogue during the 1948 War of Independence. Wounded soldiers were tended in the women’s gallery.

Another good choice is the Abuhav Synagogue with its sky-blue flourishes. A Torah scroll written by Rabbi Isaac Abuhav in the Middle Ages is housed in one of three holy arks. 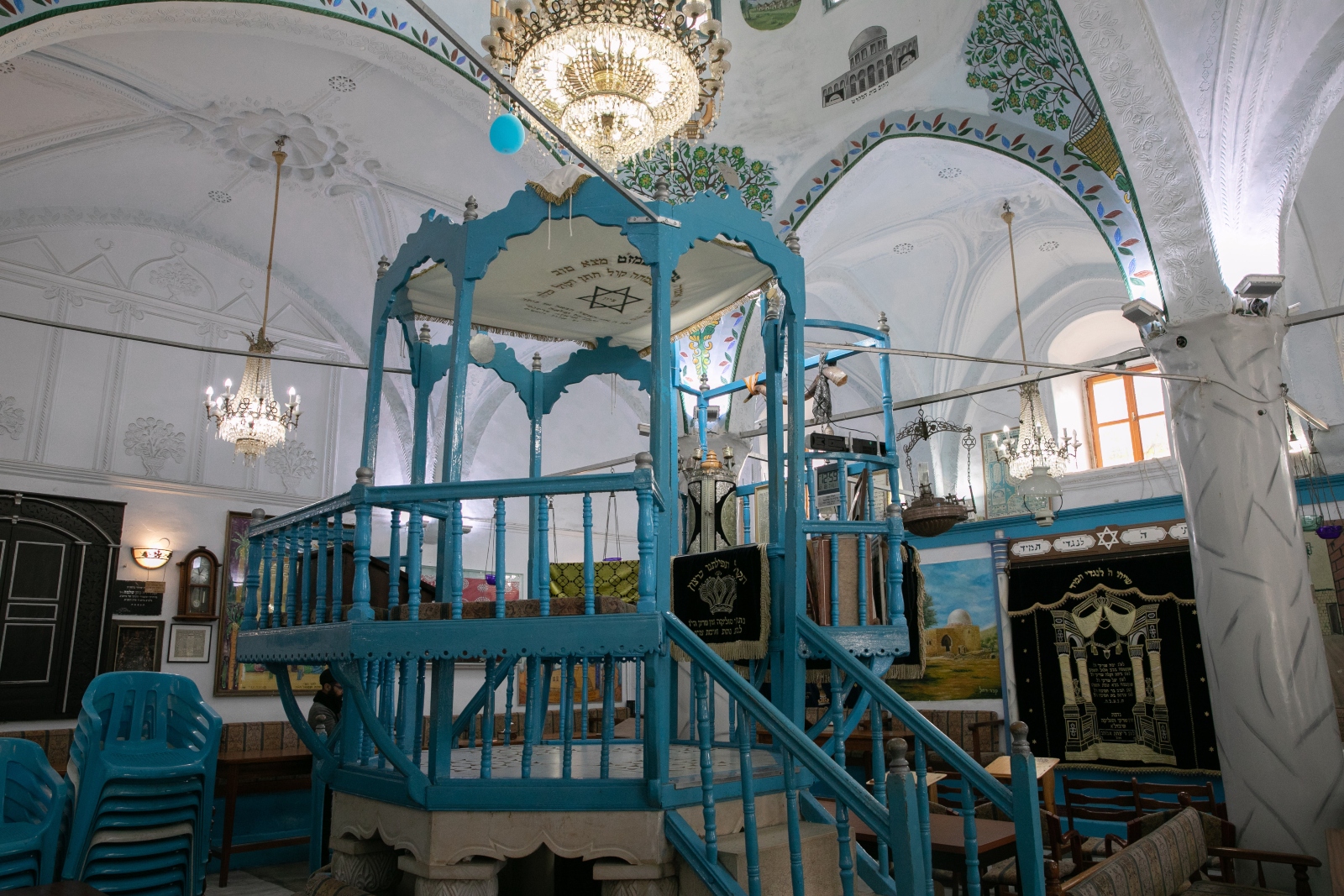 There’s also the Avrutch Synagogue that miraculously survived the 1837 earthquake that leveled most of the city; the Yosef Caro Synagogue, where you can see the Shulchan Aruch code of Jewish law written by Caro in the Middle Ages; the 15th century Bana’a Synagogue, the oldest synagogue in Safed; or the 16th century Alsheich Synagogue.

These are the oldest standing structures in Safed, says Stepansky.

The Red Mosque (also called the Red Khan) was built in 1276 by the Sultan Baybars after the Mameluke conquest of the city a decade earlier. The building isn’t open to the public except for events and concerts, but it’s impressive even from the outside. The Mameluke Mausoleum was built in 1372 as the final resting place of the local governor.

At the edge of the Jewish Quarter stands this historic three-story stone house, each level built in a different time period starting in the 16th century. Nine exhibition spaces tell the story of the Jews of Safed over the past two centuries. 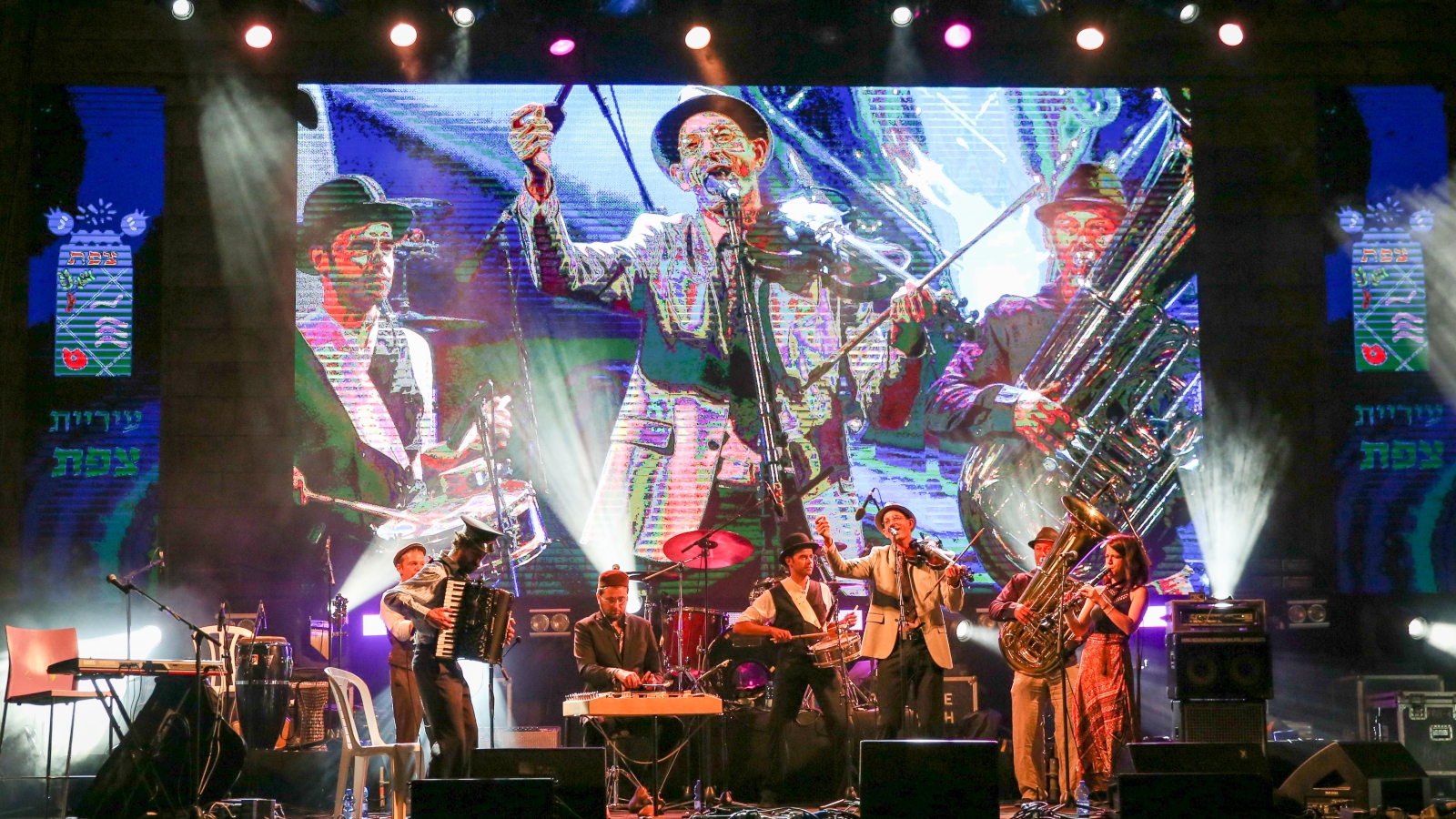 Jam sessions and street musicians fill the air with song on the streets of Safed all year long. Some special musical events in the summer bring hordes of tourists.

Every August for the past 32 years, Safed has hosted the three-night Klezmer Festival, the biggest Jewish soul festival in the world.

Stages are set up throughout the alleyways and lanes of the Jewish Quarter and Artists Quarter. Performances begin around 9pm, wrap up sometime after midnight and are completely free of charge.

A new addition to Safed’s cultural and musical lineup, the first Ladino Festival in July this year featured three days of performances, street musicians, free tours, workshops and authentic culinary experiences in the tradition of the Ladino-speaking Sephardi communities of Spain and Greece.

This famed little Yemenite eatery owned by “Ronen the Yemenite” in the Old City is most popular for its lahuhe, a filled pancake.

Also try the refreshing, stimulating qat juice (spiked with wine, if you like) and watch Ronen and staff sing and dance as they flip lahuhe in the air and fill them with cheese, herbs and vegetables to order. 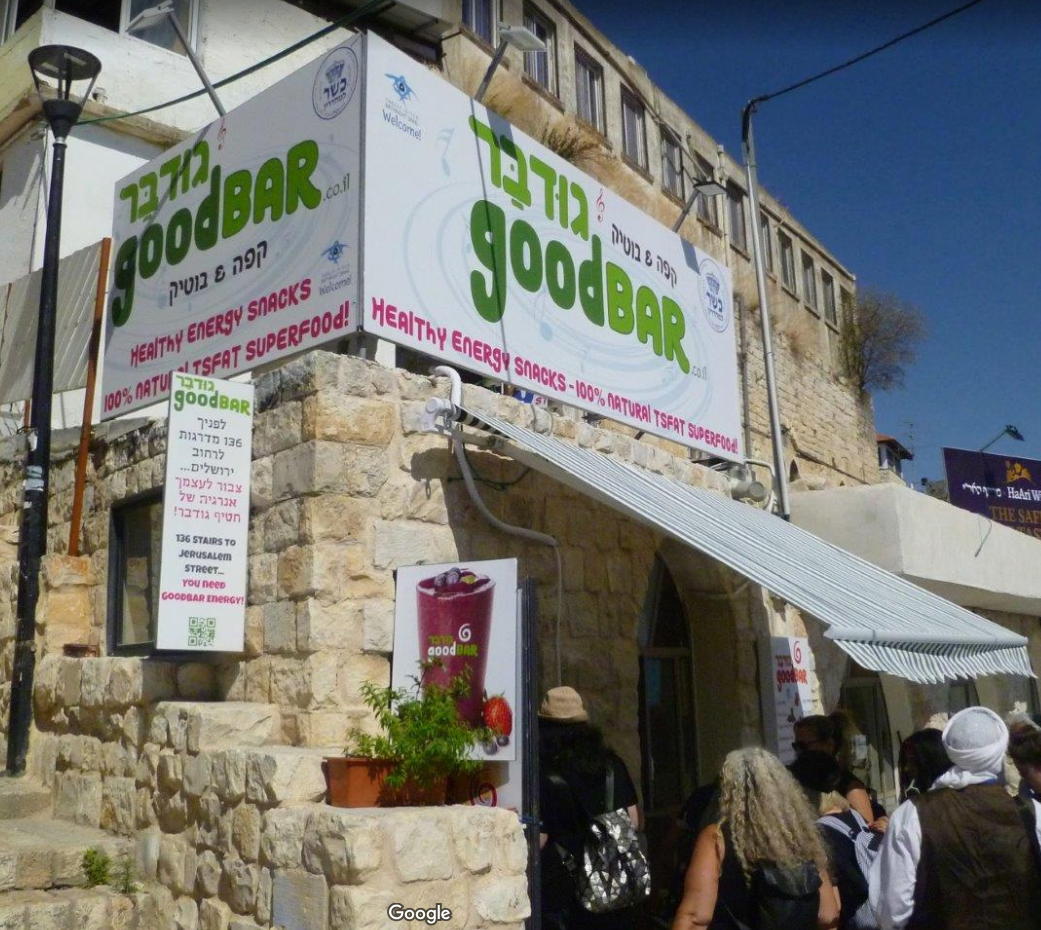 This kosher, gluten-free, vegetarian café offers a little of everything: shakshuka, hummus, Indian food, pizza and pasta, and raw vegan desserts such as cashew “cheesecake” with a date almond crust; raw cacao caramel crunch ice cream; and Mitzva Energy Balls made from tahini, honey, coconut, carob powder and pink salt. On some weekdays from 11:45 to 12:15, there’s a Lunch & Learn program led by local Hasidic scholars. 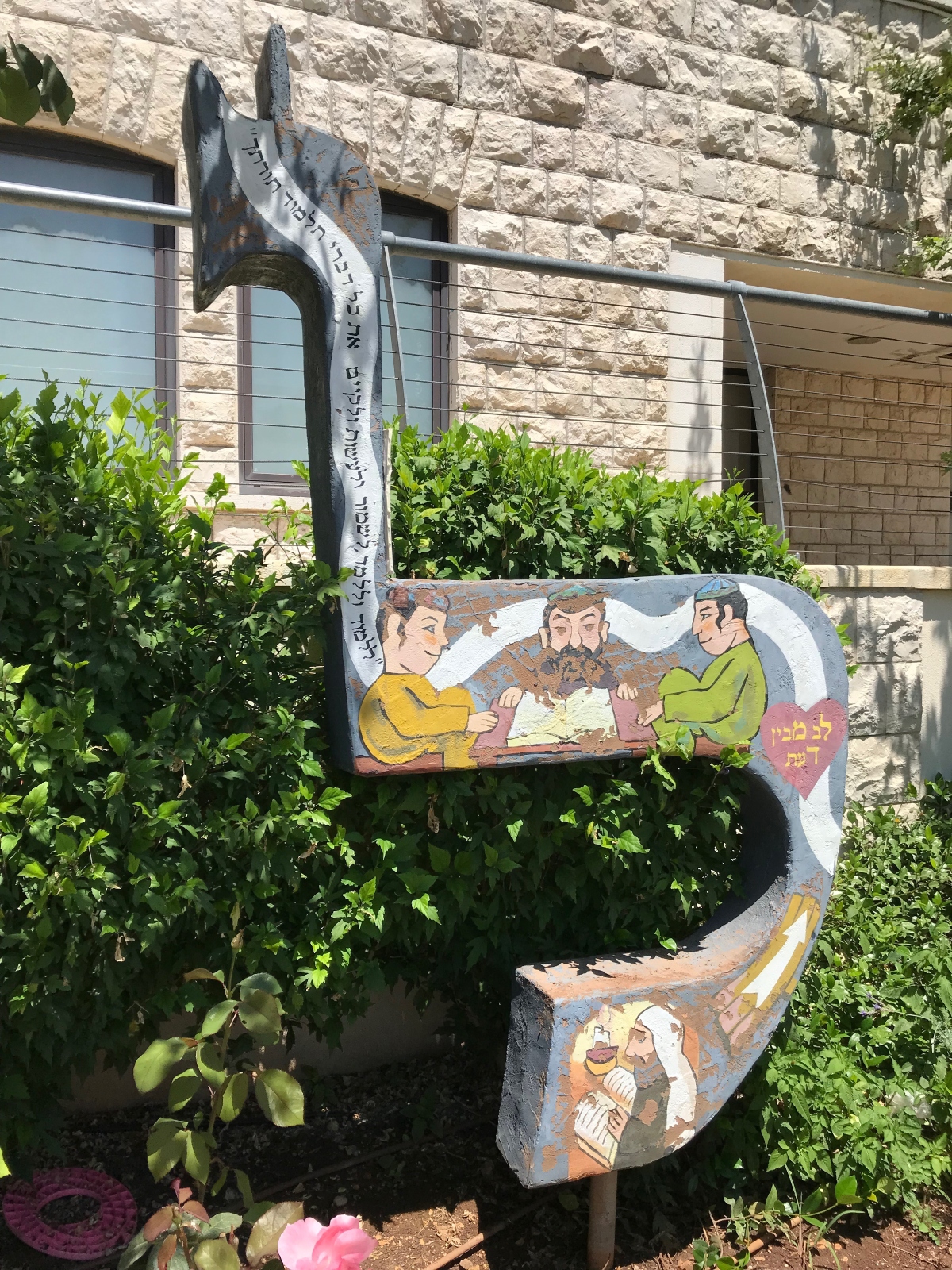 A sculpture of the Hebrew letter “lamed” in the garden of Otzar HaSTAM in Safed. Photo by Abigail Klein Leichman

Established 10 years ago in a former hotel on the summit of Mount Canaan, Otzar HaSTAM is the largest center in the world engaged in writing scrolls for Torahs, tefillin and mezuzahs (the Hebrew acronym for these items is STAM, and otzar means “treasure”).

The Visitor Center offers a fully immersive experience. First you are seated in a revolving theater to watch a partially 3D presentation (in English, Hebrew or Russian) about Jewish scribal techniques and the significance of the Hebrew alphabet.

Then a professional scribe shows you how he does his craft and gives you parchment and quill to try it. Finally, you enter a second theater to take a fun automated quiz testing your knowledge about Torah, tefillin and mezuzah.

Outside the center, giant sculptures of the Hebrew letters are set in a landscaped garden with a magnificent view.