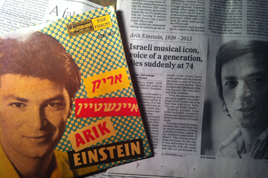 To celebrate the life of singer, Arik Einstein, who died last night at the age of 74 of an aortic aneurysm, ISRAEL21c takes a look back at a post from our archives written on his 70th birthday.
For many in Israel, Einstein was the voice of Israel – the soundtrack for a nation. His career spanned six decades, and included 44 albums.

Arik Einstein turned 70 this week. Were it not for the war, this would have been front page news. Not only because it is an occasion for celebration but because in this land of the perpetual diminutive, where everyone goes by their childhood nickname, people find it hard to believe that Arik – singer of songs, cultural icon, survivor of the Sixties and the Tel Aviv bohemia – is entering his seventh decade. If that is so, and Arik is getting old, what does that mean the rest of us?

The English-language Wikipedia entry for Arik Enstein is a rather poor version of the far more comprehensive Hebrew one, but still manages to give the reader a sense of the breadth of his career. The son of an actor, he got his start in the Nahal Brigade entertainment corps, after being demobilized he joined the legendary Batzal Yarok entertainment troupe (together with Chaim Topol, Gila Almagor and others), then the Yarkon Bridge Trio (with Yehoram Gaon and Benny Amdursky), who were so hip, they covered a Beatles song! But if you really want to know what their music sounded like and how Israel looked like at the time, this clip is best:

Einstein went on to form the The High Windows with Shmulik Kraus and Josie Katz, make films with Uri Zohar, enter into a series of musical collaborations with musicians and writers like Shalom Hanoch, Yehonatan Gefen, Miki Gavrielov, Shem-Tov Levy, The Churchills (whom he produced) and many, many other of Israel’s top talents, as well as create a string of solo albums that have always followed a clear and steady musical path.

Einstein’s lanky frame and laid-back persona was a perfect foil for the compact fireball that was Uri Zohar, who directed a series of films starring them both that depicted life among the artists and musicians congregating in “Little Tel Aviv” the neighborhood near the beach at north Dizengoff.

Later on, Zohar became Orthodox – as did several other of Einstein’s friends and his first wife – and moved to a yeshiva in Jerusalem. (Hard to believe the same man directed the following clip, depicting the disconnect between the rabbinate and a young hippie couple getting divorced.) For a while, all eyes were on Arik, wondering if he, too, would make a lifestyle change, but he never did.

Through his work, Einstein created the sound of Israeli rock n’ roll. He also made nostalgia cool with remakes of songs from the pre-State yishuv Jewish settlement. One album “Eretz Yisrael HaYeshana ve’Hatova” (The Good Old Land of Israel) included a new composition with this frustrated lyric by Yehonatan Gefen: “They say it was beautiful here before I was born / And everything was wonderful before I arrived… We came to the Land of Israel / To build and to be rebuilt / Could it be that it’s all over?” The albums wistful nostalgia was continued in this song, “Autumn.”

The conflict between classical Zionism and modern Israeli reality runs throughout Einstein’s work. In his younger years, he was known for seldom having traveled abroad. When he finally did go, he came back with ballads like “San Francisco” that describes the city’s beauty and the bay “that floods my eyes with blue and green”. The singer then realizes “Suddenly I want to go back home to the swamp / To sit in Cassit wtih Moshe and Chatzkel / Give me a slice of Mt. Tabor and a piece of the Kinneret / I love to be in love with the Land of Israel / Small, warm and wonderful.”

The greatest thing about Arik Einstein as an artist is his consistency. His already deep voice has deepened even further over the years but he continues to put out songs that Israelis want to hear, and lyrics that embody they way they feel. The song “Drive Slowly” is a great example, and sadly, still current today: a soldier’s eye view of a nighttime drive with his buddies into the darkness. “Zvi says they discovered life on another planet / And I think, pretty soon we’ll reach Gaza / Just hope a grenade doesn’t fly out / And we’ll go to hell / Drive slowly, drive slowly.”

I should add a small disclaimer here: I am distantly related to Arik Einstein and met him once at a family reunion about 18 years ago. I was completely tongue tied when introduced – literally opened my mouth and nothing came out. I suspect the same would happen today. That is what happens when one is in the presence of greatness.

UNCOVER ISRAEL - Get the ISRAEL21c
Weekly Edition free by email
Sign Up Now!
Bring Israel's story to life.
Millions of people around the world rely on us to gain a deeper understanding of Israel. We are the trusted source for original content you won't find anywhere else.
You can make a difference. Donate today to support journalism that brings Israel’s story alive.
SUPPORT ISRAEL21c
Read more on:   Music, Arik Einstein, Spotlight in Israel