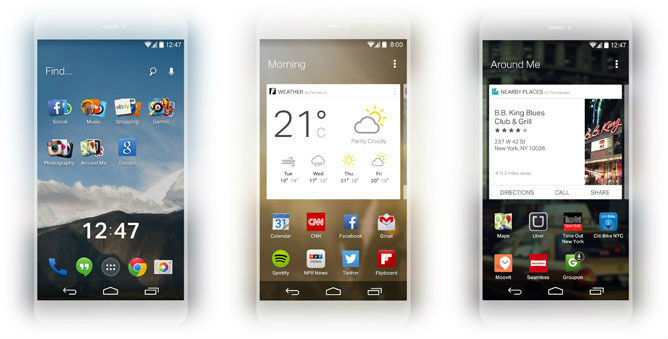 The launcher adjusts its suggestions depending on your needs at the moment.

A new Israeli launcher for Android phones has the tech community sitting up and taking notice. Called EverythingMe (everything.me), the Tel Aviv-based startup is what its head of special projects Roi Carthy calls the “holy grail for developers and advertisers.”

According to the 38-year-old entrepreneur/investor who joined the company six months ago, this is because it is a novel type of search solution that is all about the context of the person using it.

“Different people have different search needs,” Carthy tells ISRAEL21c. “Yet our phones were not providing personalized solutions. In other words, our smartphones weren’t ‘smart’ enough.”

The team at EverythingMe set out to correct that. Established as Do@ in 2010 by seasoned innovators Rami Kasterstein, Ami Ben David and Joey Simhon, the company created a search application for iOS (an operating system developed by Apple exclusively for iPhone, iPad, iPod Touch, and Apple TV).

“It worked to some extent, but not smoothly enough,” explains Carthy. “We were right that people needed a better way to search on their phones, but Apple’s system made this difficult.”

What the team at EverythingMe discovered during its first incarnation was how infrequently people conduct Google searches on their phones – a mere 1.5-1.75 searches per day – in spite of wanting the same results as they get on their home computers or laptops.

Android’s introduction of “launchers” to enable customizing home screens “opened up exciting possibilities in general, and for us in particular,” says Carthy. “Unlike Apple, which wants its phone to look and operate in a certain way.”

So EverythingMe removed its app from iOS in February and shifted to Android as a launcher. Though it downloads like any app in Google Play, once installed, it “takes over the phone’s look and feel.”

The product – which delivers personalized apps, contacts and other information to the home screen at the appropriate place and time for users worldwide — is divided into three parts: a “find” bar, a prediction bar and smart folders.

Through complex algorithms and a 50-strong staff of mostly software engineers, the product identifies users’ habits and anticipates what content or apps each will need at a given time of day.

Carthy gives the example of a person who commutes to work by train. “If he presses ‘W’ in the ‘find’ bar in the morning, he is probably not searching for Waze. So his Waze app will not appear prominently on the home screen; instead, his phone contacts that begin with ‘W’ will pop up, and perhaps the Wall Street Journal, if that’s a paper he reads every morning. And he will even be offered options he didn’t think to search for, but which are tailored to his needs.”

Take the “smart folders,” for instance. “They are our innovative way of organizing installed apps intelligently and intuitively.”

EverythingMe reportedly can even predict a user’s down time. “We know when you’re bored, maybe in the bathroom, so when you open your phone, you will see the games you like to play at the top.”

Carthy (one of whose many ventures was Soluto, purchased last October by American company Asurion for $120 million) says it is like “technical magic,” performed through the endless and thorough study and processing of millions of signals of data per month.

Google does not view EverythingMe as a competitor, but rather as a crucial generator of advertising and traffic in the Google store. Indeed, the less people use their phones to search, the less financially beneficial for all concerned.

The trailblazing challenge that EverythingMe is meeting, says Carthy, is “discovery and reengagement.”

EverythingMe is free for the consumer, but costs the company a great deal of money in manpower and infrastructure. So far, it has raised $37 million from big investors, including BRM Group, Draper Fisher Jurvetson (DFJ), Horizons Ventures, Telefónica Digital, Singtel Innov8, DFJTF and Mozilla.

“This launcher knows me,” concludes Carthy. “It creates the perfect phone.”