A long exposure picture shows Iron Dome firing interception missiles, as seen from the southern Israeli city of Ashdod on May 16, 2021. Photo by Avi Roccah/Flash90

The current round of violence between Israel and Hamas in the Gaza Strip erupted with a literal boom as rockets were fired from the Palestinian coastal enclave toward Jerusalem.

They set off rocket attack sirens that have become the soundtrack of the past week, accompanied by the booms of Iron Dome, the air defense system whose interceptor missiles have been regularly blowing up incoming rockets and turning the night sky into a bizarre, firework-like display.

RAW FOOTAGE: This is the moment the Iron Dome intercepted a barrage of rockets over Tel Aviv and central Israel. pic.twitter.com/8jl8OTgWCl

Although Iron Dome has been in use since 2011, it is this most recent conflict that has exposed its amazing capabilities to the Israeli public. As heavy rocket fire reaches multiple and widespread locations across the country, many citizens are breathing much easier knowing that they are under the protection of this wonder.

Here is everything that you need to know about it.

When Brig. Gen. Daniel Gold first proposed his idea for Iron Dome, he faced strong criticism that required a lot of nerve to overcome. Luckily, he managed to convince the country’s top brass of the advantages of his concept of air defense.

“My incentive was saving human lives,” he told ISRAEL21c a few years ago. “I saw what was going on and I said to myself, with all the technology that exists in Israel we must use it to protect human life. We will find a way. It always takes the political and military echelons a long time to think about what they want to do, and in the meantime we started to create a solution.” 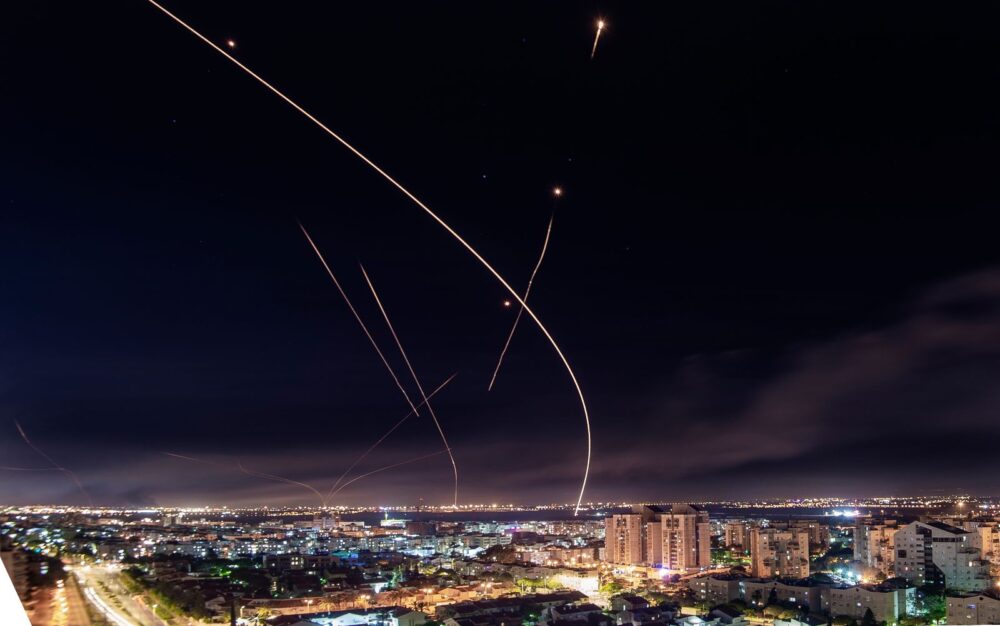 A long exposure picture shows Iron Dome in action over the southern Israeli city of Ashkelon on May 16, 2021. Photo by Avi Roccah/Flash90

One of the reasons so many people were skeptical about Iron Dome was the type of threat that it was meant to protect from – short-range and low-tech rockets.

According to Rafael, the defense-sector corporation that developed it, Iron Dome works against mortars, artillery shells, rockets, unmanned aerial vehicles, helicopters and more. In fact, the current conflict saw Iron Dome intercept a UAV, the first operational interception of its kind in the world.

Iron Dome batteries are made up of three parts: a radar, a control center and interceptor missiles. The radar recognizes when a rocket is launched, while the control center quickly calculates its flight path. If it estimates that the launch will prove dangerous, the interceptor missiles are launched to detonate the rocket before it gets too close to its target, resulting in streaks of light and deafening booms.

Each Iron Dome launcher holds 20 interceptor missiles that each weigh 200 pounds and is 10 feet long. Slender though they are, you wouldn’t guess it from the sound the system emits when a missile is launched, which is more reminiscent of a fighter jet taking off. 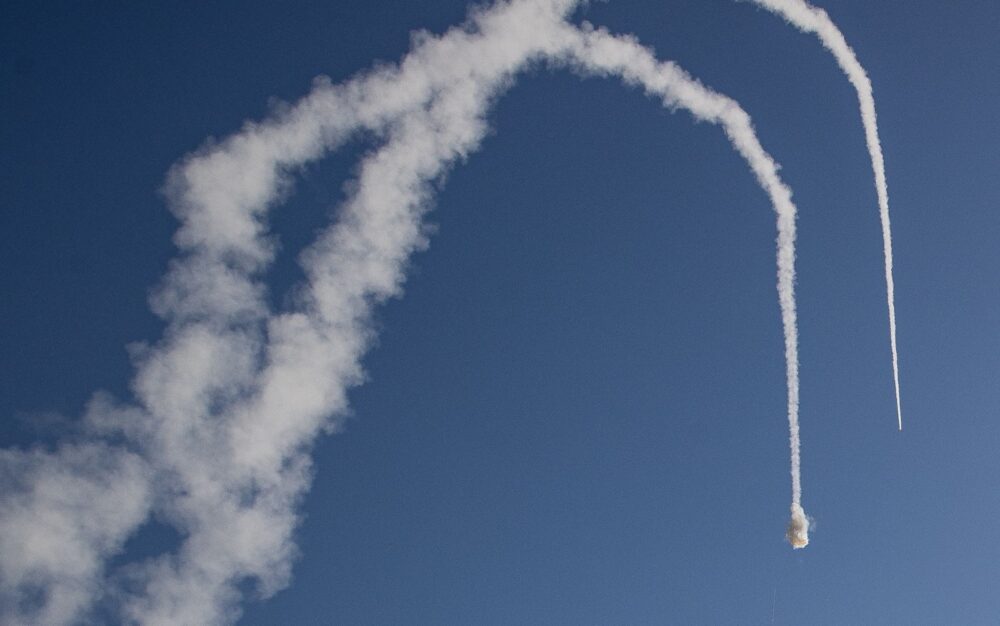 Iron Dome intercepts rockets launched from Gaza toward the southern Israeli city of Ashkelon on May 14, 2021. Photo by Yonatan Sindel/Flash90

Despite its small size, Iron Dome covers an extensive range of between 2.5 and 40 miles. This means it can intercept rockets launched out of the southern Gaza Strip heading for the border areas and also the area reaching as far away as the outskirts of Haifa, which is much farther north.

Iron Dome protects Israelis from short-range threats such as rockets, but it’s no use when it comes to bigger, more advanced weaponry. Therefore, it’s supplemented by an aerial defense system called David’s Sling, which operates against cruise missiles; and by Arrow, which targets more sophisticated ballistic missiles.

INTERCEPTED:
Terrorists recently fired another barrage of rockets from Gaza toward the Israeli city of Ashkelon.

We intercepted the rockets with the Iron Dome Aerial Defense System, and are now striking Hamas terror targets. pic.twitter.com/5i87BRAgDn

In Operation Protective Edge in 2014, Iron Dome proved to be highly successful, intercepting 90 percent of fatal rockets. Nowadays, its accuracy is said to be nearer to 95 percent. This means that the combination of Iron Dome protection and following guidelines on how to behave during an attack (rushing to a protected space if indoors or lying flat on the ground when outdoors) has saved many, many lives in Israel. In fact, it’s a game changer.

Iron Dome can work in all weather conditions, including low clouds, rain, dust storms or fog.

One of the criticisms first launched against Iron Dome was that it’s a costly operation. Each battery reportedly costs $100 million dollars, and each interceptor missile around $50,000. All this, while the rockets it detonates only cost a few hundred dollars to produce. And yet, time has shown the huge impact of the system, not only in terms of saving lives but its protection of infrastructure, buildings and the like.

When rockets are launched into Israel, a rocket siren alert called Color Red is blasted throughout the area in danger. The alert announces “Color Red, Color Red” in a tinny female voice, which is then immediately accompanied by the booms of Iron Dome. Together, these noises have become the horrible soundtrack of the week.

Iron Dome can protect people and infrastructure on land and at sea. One version can be loaded onto trucks and placed in desired locations near communities or important facilities, while the other can be positioned atop Israel Navy ships to safeguard infrastructure such as offshore gas rigs.

After some speculation, the United States confirmed in 2019 that it purchased Iron Dome batteries. According to Israeli media reports, the US purchased two batteries, which it planned on stationing in conflict zones outside of its borders. Britain, meanwhile, has purchased Iron Dome’s control center.

The anonymous developers of the Iron Dome, who hail from the defense establishment, won the prestigious Israel Defense Prize back in 2012 for their work, only one year after the system came into use.

According to an interview given by Iron Dome’s developers a few years ago, they created the system with its future possible handlers in mind.

This means that it can be easily operated by an average woman soldier standing 5-foot-2 feet tall and weighing about 100 pounds. And it probably is – all Iron Dome battalions include female soldiers.

One of the Iron Dome developers said that to meet schedule and budget requirements, some of the missile components were taken from a toy car he had bought for his son at a local Toys R Us store. A few years later, things came a full circle when an Iron Dome toy car model hit the market.