The Internet of Things will completely transform our daily lives. Photo by www.Shutterstock.com

The Internet of Things will completely transform our daily lives. Photo by www.Shutterstock.com

The Internet of Things, or IoT for short, describes a network of Internet-enabled objects (“things”) capable of transferring data to one another to perform tasks without human intervention.

This machine-to-machine connectivity will completely transform our daily lives, according to presenters at Israel’s first ISmart Conference. The February event in Jerusalem presented a window on the future of IoT and how Israeli entrepreneurs, investors, companies, designers and technologists will play a role in it.

“IoT is going to be the biggest wave of the Internet that we’ve ever seen, more than mobile Internet and cloud computing,” declared Inbar Lasser-Raab, the Israel-based vice president of enterprise networks and IoT marketing for the multinational networking equipment maker Cisco.

By 2020, it is expected that 26 billion objects will be connected to the Internet, not including PCs, tablets and smartphones.

We’re talking about vehicles that communicate with each other on the road. Smart home systems that manage power consumption. Smart bracelets to help parents locate children. Wearables that let you and your doctor keep tabs on your health. Drones that can deliver a package for you and come back home automatically. 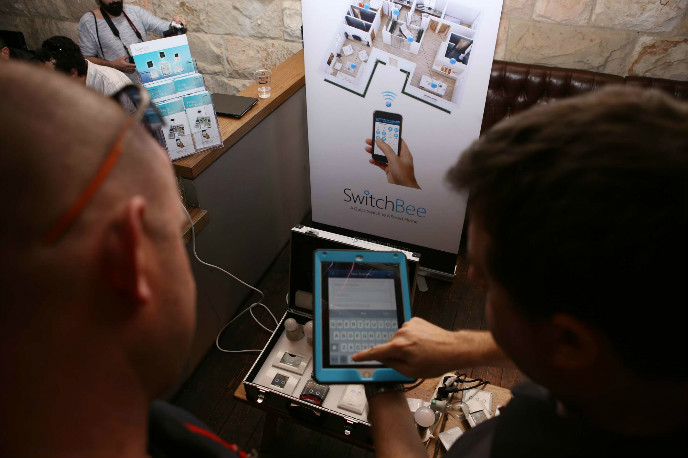 Sensors and software are the heart and soul of IoT, and Israeli companies are hard at work designing smaller, smarter sensors and smarter apps.

“We need to lower the cost of sensors, make smaller sensors, lengthen battery life and develop ‘killer’ apps so that IoT can really take off,” said Lasser-Raab.

Connecting machines to machines is only the first step. “After we get the data from the sensors, we need to be able to analyze it and do something with it, so it is data analytics that is going to change this industry. Just as [ride-sharing app] Uber didn’t invent taxi service but used analytics to provide a better service, that’s what IoT is all about.”

Cisco, which is investing heavily in IoT, worked with the Australian government in 2010 to embed sensors in seven areas around the Great Barrier Reef. The sensors transmitted biological, chemical and physical data to a base station on shore via wireless technology. “The base station analyzed all that data, providing information on fish movement, biodiversity and potential damage to the reef so the government could repair and minimize that damage,” Lasser-Raab said.

Her division’s research shows that oil, gas and utilities industries are most eager to invest in IoT in the next three years, followed by manufacturing, transportation, mining and retail.

How would IoT transform shopping? Lasser-Raab described how Louis Vuitton put RFID (radio frequency identification) sensors on merchandise in some of its stores as a test. Customers were handed iPads, and as they walked around the store, information and videos popped up about the tagged merchandise. These customers spent three times more money than did customers in non-connected Louis Vuitton branches.

When Lasser-Raab talks about “killer apps,” she means pivotal applications that drive the infrastructure of IoT.

In smart cities such as Barcelona and San Francisco, she said, the killer app is smart parking. Israeli companies Pango, Parko and Anagog are world leaders in smart-parking technology, which manages traffic by steering drivers to empty spots via smartphone or electronic street panels, and facilitates automatic payment.

“What cities want most is to make money and reduce traffic,” explained Lasser-Raab. “That’s the idea behind smart parking, because 30 percent of city traffic is people circling around looking for parking.”

Building on the smart-parking infrastructure, other apps can enable cities to implement smart waste collection, street lighting and environmental monitoring. “We’re now looking at smart cities under a million people, including in Israel, for what smart applications we can add once the city makes an investment,” said Lasser-Raab. Entrepreneurs, investors, companies, designers and technologists came to Jerusalem to learn about the future of IoT. (Photo: Maxim Golovanov

“By 2020, 90% of new vehicles will be connected to the Internet and to each other, and some of them to public infrastructures. The benefits are endless,” said ISmart presenter Tom Bar Av, marketing director for Argus Cyber Security.

“The Internet of cars is part of the IoT revolution and it will reduce road accidents by as much as 80 percent. It will make your car an extension of your home and office because you’ll be able to surf the web while your car drives autonomously.”

However, car connectivity opens a new cybersecurity frontier. Argus and other Israeli companies, including TowerSec, focus on this need.

“The future of smart cars will depend on cybersecurity,” said Bar Av. “Even today, our cars are hackable because they contain so many computers, many of them connected to the Internet. Hackers can take full control of the vehicle unless it is cyber-protected.”

“Infrastructure, security, analytics and middleware are all needed,” said Cisco’s Lasser-Raab. “No one company will make it alone; solutions have to be put together like LEGOs.”

At about the same time as the ISmart Conference, Japanese-Israeli IoT startup IQP  announced a partnership with Japanese corporate giants Fujitsu, NEC Engineering, and KDDI.

Companies can use the IQP platform to create app markets and allow third parties to develop IoT applications that can generate profit. Currently, international companies are having difficulty forming profitable business models around IoT due to the large investment of time and money in developing and commercializing IoT applications.

Guy Kaplinsky founded IQP in 2011 with $5 million, and launched sales in 2014. The company is headquartered in Tokyo with R&D operations near Tel Aviv and a new office in New York City. Plans are underway to establish a branch in Silicon Valley this year.

“Our platform is capable of changing the way IoT will operate in the fields of automotive, cellular, energy, healthcare, smart home, smart city and education,” said Kaplinsky. “Each one of these fields is an enormous market in itself, which indicates the huge business potential of our platform.”

One executive at ISmart scouting out IoT startups told ISRAEL21c that he’s looking for solutions that can benefit both his company and the customers. “The benefits for the company are easy to find: IoT can help us monitor customers, how they consume or use our product and maintain it, but for the customer we are looking for the real value, and I think that’s what every company is looking for.”