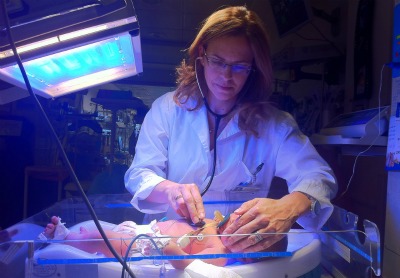 The way Dr. Iris Morag lovingly introduces visitors to the tiny babies in her neonatal intensive care unit (NICU), one might assume they’re all her own children. And in a sense, they are.

Director of neonatal care at Mayanei HaYeshua Medical Center (MYMC) in Bnai Brak since 2009, Morag and Dr. Daniel Lubin, head of the unit (NICU), see themselves as parental figures.

“I say that I am the mother and Lubin is the father,” Morag says with a ready smile. “He understands that the unit needs a mother.”

In October, Morag will become Israel’s first Griffiths Scales trainer, showing medical personnel how to do multidisciplinary developmental assessments of children from birth to eight years old. She’s opened a follow-up clinic at her hospital to use Griffiths Scales for gauging developmental growth and health.

Morag also has introduced the Newborn Individualized Developmental Care and Assessment Program (NIDCAP), an internationally recognized system to support the growth and development of premature infants and to improve the quality of their care and support for their families. MYMC is only the second hospital in Israel to adopt NIDCAP protocols.

Pausing at every incubator, she describes to ISRAEL21c the circumstances under which each newborn came to be under her care. She stops next to a month-old girl who isn’t gaining weight well.

“When a little one like this is born, I get into such an energetic state that I’m exhausted,” she admits. “We now have iPads at home to see what is going on in the NICU, and I find myself running to the computer to see the latest blood work. Every preemie is a new adventure and a big demand on our energy.” 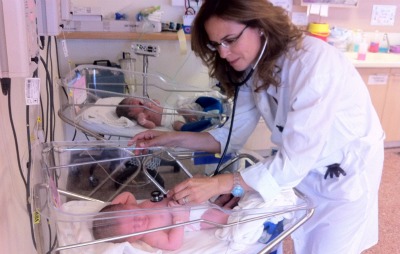 Uniquely, Israel’s healthcare system provides free fertility treatment for up to two children per family. Older parents and multiple babies conceived through IVF contribute to the rising number of small and premature infants. One in eight Israeli babies is born preterm, with one in 100 weighing less than 1.5 kilos (3.3 pounds) at birth. At MYMC, as many as 14 infants are in the NICU on any given day, for a variety of medical reasons.

One of the presenters was Dr. Sunny Anand, a pediatric critical care specialist at the University of Tennessee Health Science Center. Anand, a leading advocate of pain relief measures for newborns, is cited by Morag as her personal role model along with NIDCAP pioneer Prof. Heidelise Als of Children’s Hospital in Boston.

“Until now, neonatologists have focused entirely on the survival of newborns, but today we are paying more attention to their welfare and long-term developmental needs, so that they will experience less trauma and live healthier lives,” she says.

NIDCAP leads to better weight gain and fewer days in the NIC, she relates. The procedures require more time of Morag and the nursing staff – an extra five minutes to dabble sucrose on an infant’s tongue before drawing blood; an extra hour or two observing, recording and analyzing newborn movements to help them find individual solutions for each baby’s comfort. 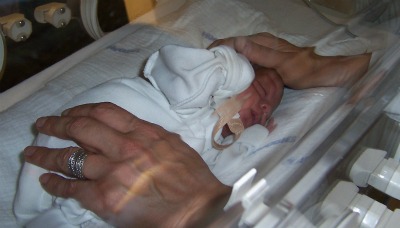 Photo by Abigail Klein Leichman
Dr. Morag comforting a baby in the NICU.

“It takes a lot of time to watch and record our findings. But as a result, this has become a less invasive job. We move slowly, talk to the baby and do everything in a gentle way.”

Morag tries to make the NICU quiet and conducive to privacy for each parent-child trio. Too much light and noise stresses both babies and parents.

“It’s a part of our philosophy to put the parents in the center, empowering them in order to empower their child, and we are at the periphery. I explain everything to them so if they see something is wrong they can help me,” says Morag. “They are the parents and I want them to feel in control.”

She encourages mothers and fathers to “kangaroo” with their newborns, holding them against their chests for skin-to-skin contact even if the babies are hooked up to machines.

“Smelling their parents, feeling the warmth, is good for the baby and gives the parents confidence,” says Morag. “It’s good for both sides.”

While NICU babies in most hospitals are not routinely breastfed, here mothers are actively encouraged and helped to nurse from day one. Morag and the hospital’s lactation consultant are setting up a breastfeeding clinic for “graduates” of the unit.

Balancing her babies and her kids

Morag, 43, is married to a sports orthopedic specialist and lives in Ramat Gan, a suburb of Tel Aviv. The Morags have three children: son Eilam, 15, and daughters Dana, 12, and Maya, six.

Trying to be a good mother and doctor simultaneously “is the most difficult part of my life, a persistent frustration,” she confides. “I am always trying to balance so that when the unit is less demanding the kids get more quality time. My husband and our parents help, too. The kids have been very independent from early on, learning to help each other and to take responsibility. They are proud of their mother and understand that her special job requires their tolerance as well.”

Born in Herzliya, Morag wanted to be a doctor from childhood. She earned her MD from the University of Graz in Austria, where husband Guy was also studying. She did a pediatric residency from 1999 until 2003 at Israel’s Assaf HaRofeh Medical Center in Tzrifin. After learning about neonatal pain management and NIDCAP during a fellowship at Toronto’s Hospital for Sick Children, in 2005 she started a four-year stint at Sheba Medical Center in Tel HaShomer as head of neonatal follow-up care.

Morag pauses her tour at the isolette of the unit’s first NIDCAP baby, born at 24 weeks and now nine weeks old. “You can see he is in a very tucked position, smiling. So he’s happy and comfortable in his little nest. This morning, I did blood work on him while his mother kept the soother in his mouth and talked to her child as I worked.”

She emphasizes modestly that none of her innovations was an original idea. “I didn’t invent any of this; I just brought in what I saw was good.”