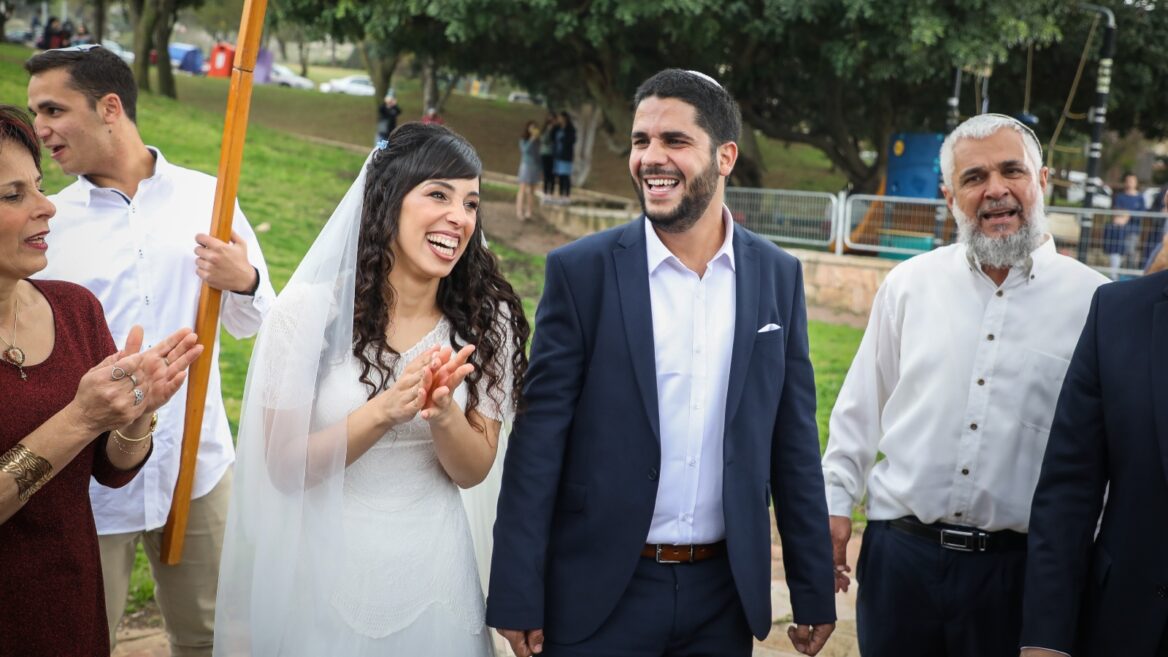 Hananel Even Hen and Shiran Habush got married March 15 in a public park after their wedding at event hall was cancelled due to new regulations to prevent the spread of coronavirus. Photo by Gershon Elinson/Flash90

Many Jerusalem couples get engaged on the Weisberg family’s balcony overlooking the Western Wall and Temple Mount. The tradition was started years ago by the previous occupants, and the Weisbergs continued it since moving in two years ago.

“Know a couple who had to cancel their wedding due to coronavirus restrictions? Please let them know that they can get married with a party of 10 on our porch … for free,” she posted on Facebook.

The mother of eight explains to ISRAEL21c that the subject of marriage is close to her heart. She is involved in matchmaking and her family enjoys letting would-be grooms pop the question on their balcony.

“I felt if couples had the opportunity to marry here, maybe they wouldn’t postpone their wedding,” she says. “If you find the right one, you should go for it — and I want to help people do this.”

As of Tuesday, one couple has scheduled their wedding for Sunday on the Weisberg balcony and another three are coming to check it out.

Weisberg asks only that the rules be enforced (“The total number, including photographer, can be about 20 because we can have half outside and half inside”) and that the wedding givers clean every surface thoroughly before leaving.

Weisberg sees her gesture as a form of paying it forward.

When she got engaged 17 years ago, she was a student with no family in Israel. Yet she and her fiancé were treated to a 100-person engagement party by Estee Yarmish, a Jerusalem woman who has organized free parties for hundreds of couples over the years.

“She just did it out of love. What I am offering is nothing compared to that,” says Weisberg. 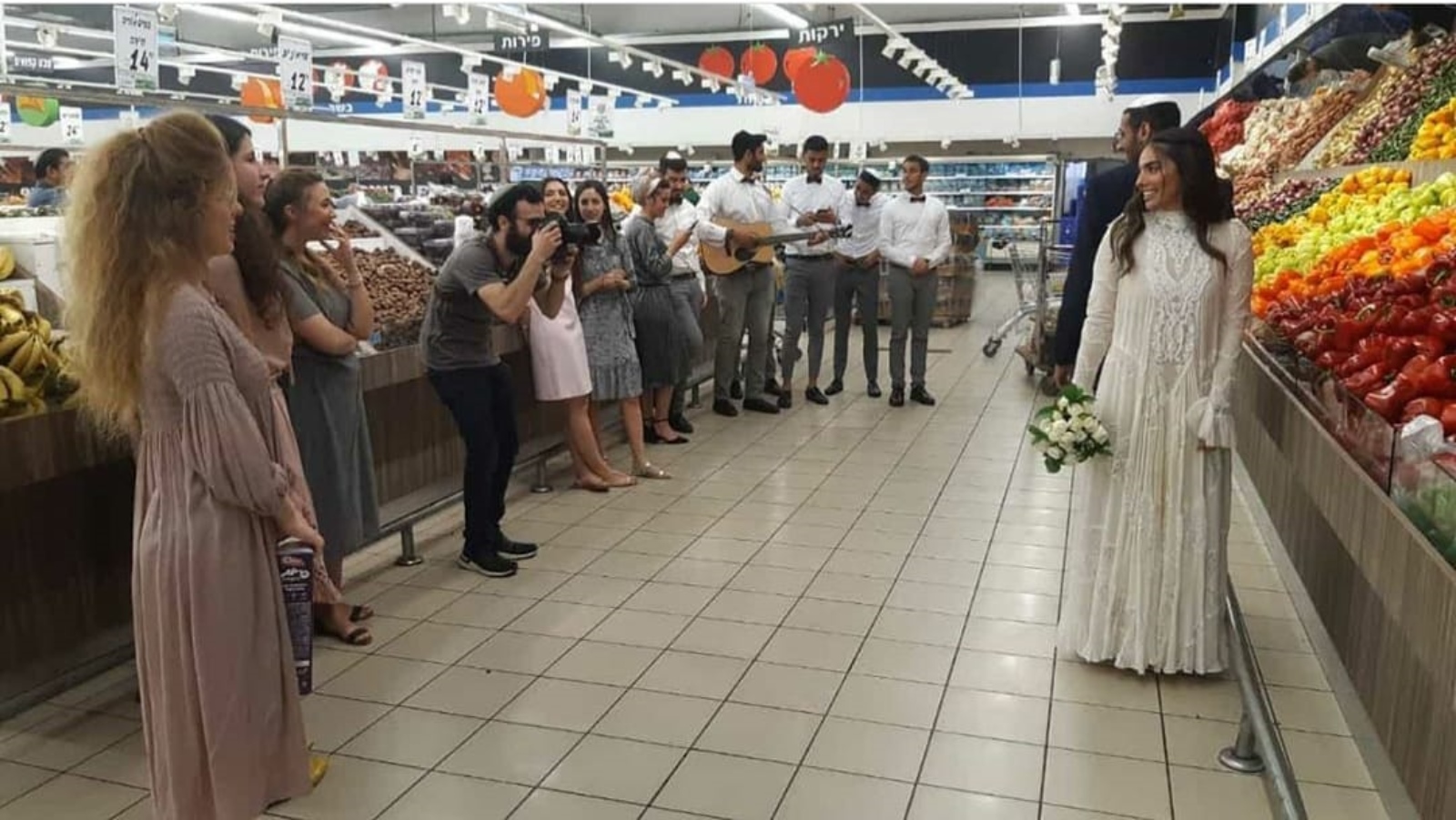 On March 15, 2020, this Israeli couple got married in a supermarket. Photo via Facebook

Before the 10-person rule was announced this week, Israel was restricting gatherings to 100 people in the hope of preventing the spread of coronavirus.

The problem is, Israeli weddings are typically quite large and many halls require a 300-guest minimum.

This led to a flurry of cancellations, postponements and last-minute alternative plans. One couple decided to wed in a supermarket, where the restrictions don’t apply.

The 100-person rule was announced the night before Sarah Hirsh and Sam McCartney’s wedding on March 12.

“We spent the day of the wedding paring the guest list down by two thirds. Each side was allowed 50 people,” Hirsh tells ISRAEL21c.

Her mother, Barbara, sent a WhatsApp message to guests explaining the situation. “A lot of people responded that they would cancel on their own. Then we narrowed it down to the nearest and dearest and sent the rest of the group a message of apology.”

The final count was 96 — not including the band or the police officers who came to check that the hall was keeping to the limit. Wedding planner Risa Shapiro of FAB Events Israel was on hand with an assistant to help with the many last-minute changes and logistics.

“In the end, it was a very beautiful wedding because the people who came were more motivated to add positive energy to the celebration,” the bride reports.

The same motivation is evident in the scene shown in the video below from a wedding held in the courtyard of a Petah Tikva housing development.

Neighbors were already out on their porches for a mass singalong with kids in the Jerusalem Flowers band conducted by Hanan Avital. Then they noticed that Or Haim and Ravit Hadad were getting married in the courtyard and so they serenaded the couple with songs including the Ishay Ribo hit “HaLev Sheli” (“My Heart”). The ballad about faith in tough times includes the line, “And only You can turn my mourning into dancing.”

A community chips in

Another casualty of 10-person weddings is presents. In Israel, many couples count on generous cash gifts to finance their new start.

Orit Dahan of the Beersheva suburb of Meitar started an initiative where locals can contribute toward a communal fund for Meitar couples whose weddings are restricted to 10 people because of coronavirus rules.

“It’s very sad for them not to have the wedding they dreamed of, so I thought of the idea of a community effort,” Dahan tells ISRAEL21c.

“Whatever people feel comfortable contributing they can do safely through PayBox.” She will split the sum among several qualifying couples, and nobody will know who gave what amount.

Kleinberg’s bed-and-breakfast, Casa Caesarea, is often booked by couples as a scenic backdrop for wedding-day preparations and photos.

With the new 10-person rule in effect, she decided to offer a special deal on “intimate boutique weddings” including wedding-night accommodations for the newlyweds.

“I’ve spoken to many wedding professionals and everyone is in dire straits. But they are willing to give reduced prices and make it happen,” Kleinberg tells ISRAEL21c.

With balconies overlooking the garden where the ceremony would take place, “We can respect the rules and not risk the spread of disease but at the same offer a charming wedding in a beautiful setting.”

On March 17, the Israeli government imposed a partial shutdown on the country, ordering Israelis to remain at home unless they need to leave for work, supplies or a medical emergency. All weddings are now cancelled for an indeterminate amount of time.