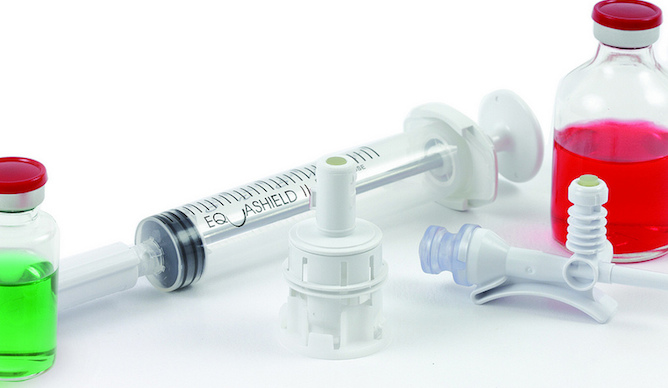 The device is used in hundreds of hospitals.

While powerful chemotherapy drugs can save patients’ lives, exposure to vapors, residues and needle jabs from these toxic pharmaceuticals is linked to an increased risk of skin rashes, infertility, birth defects and even cancer for the millions of medical professionals who prepare, dispense and administer them.

That’s why about 20 percent of US healthcare workers are now using “closed-system” drug transfer devices on the recommendation of the Centers for Disease Control and Protection (CDC).

As demand is expected to rise — the chemotherapy market is currently the fastest growing in the pharmaceutical industry — Israeli company Equashield stepped into the field in 2010 with what it claims to be a uniquely affordable, regulation-compliant and safe solution.

The company’s products, which are FDA and CE cleared for the United States and Europe, are currently used in hundreds of hospitals and clinics.

Marketing and sales manager Adi Shahar tells ISRAEL21c that existing closed-system (or semi-closed-system) devices generally depend on a filter or balloon mechanism to equalize the pressure in the vial. However, they are complicated to use and not fully protective for worker or patient, because they cannot stop all drug vapors from escaping or because they can’t keep contamination from ambient air entering the vial.

“A typical chemotherapy session requires the transfer of a cytotoxin from a vial to a syringe, and then again to the infusion bag,” Shahar explains. “The pressure disparity during drug transfer expels vapors, droplets and aerosols into the work environment, and is considered as one of the main routes of exposure.”

Equashield’s founders devised a user-friendly, foolproof alternative using a tight-seal double membrane to prevent vapors from escaping and to keep the vial sterile. Shahar says this closed system is the only one that is fully compliant with regulatory guidelines in the United States as well as other countries.

Since it was introduced, Equashield has captured half of the leading competitor’s customer base and added many new users. The privately held company had a 60 percent year-over-year increase in sales in 2013 and began turning a profit.

Equashield II on its way

With its headquarters and factory in the Tefen industrial park in northern Israel, Equashield is sold worldwide through a New York sales office and a network of distributors. The company has 180 employees, 85% of them in Tefen.

Shahar explains that the company grew out of another Tefen-based firm, Plastmed, which supplied fluid-transfer devices to Johnson & Johnson. In 2007, Plastmed’s owners Meron Mann, Marino Kriheli and Eric Shem-Tov were seeking their own product and learned about the shortcomings of existing closed-system drug transfer devices and the growing need for better alternatives.

Once they perfected their design idea in 2010, they brought prototypes to healthcare facilities.

“The plan was to go to big hospitals in the chemo area to start clinical studies with their product and maybe combine their knowledge, but as soon as users saw the system they said, ‘Bring it on, forget about studies.’ That’s how it started. And now we are in hundreds of hospitals in the US,” says Shahar.

“A distributor in Europe started working with us, and in one year we won sales at 15 hospitals. Companies are coming to us from all over the globe – we have distributors in Asia, Australia and New Zealand. In Israel, we have 60 percent of the market.”
The company is now working toward the launch of its next generation product, Equashield II.

“What distinguishes our company is high-tech,” says Shahar. “We’re always working toward our goal to be the best closed system ever. We published new studies about how Equashield completely eliminates surface contamination, while our competitors could only show reduction, not elimination. We are also introducing more automation in our factory to become more efficient in the manufacturing process.”