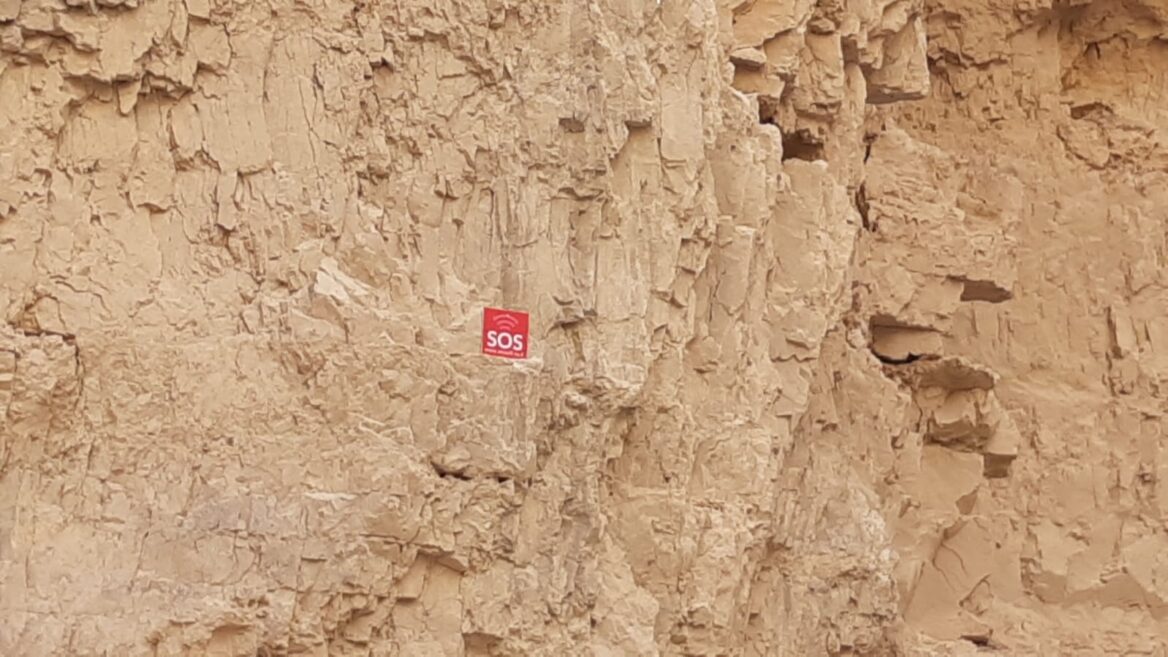 A sign informs hikers at Nahal Og that an SOS WiFi connection is available. Photo courtesy of Bein Hashitin

Hikers needing assistance or rescue frequently find themselves in areas without cellphone reception. In Israel, they can now look for a red sign indicating an SOS WiFi emergency hotspot along the trail.

The unique new network has already saved lives, says Shachar Katzir, manager of the SOS WiFi project for Bein Hashitin, the nonprofit organization that developed the technology and is installing the hotspots in cooperation with the Israel Nature and Parks Authority.

“In one incident last year, a teenager hiking in the Golan Heights got bitten by a snake and needed to get to the hospital quickly, and thanks to our system was evacuated by helicopter in time to be saved,” Katzir tells ISRAEL21c.

In another incident in the north, a Nature and Parks Authority ranger came across a trekker in medical distress and used the hotspot to make a video call to get instructions on how to treat him. 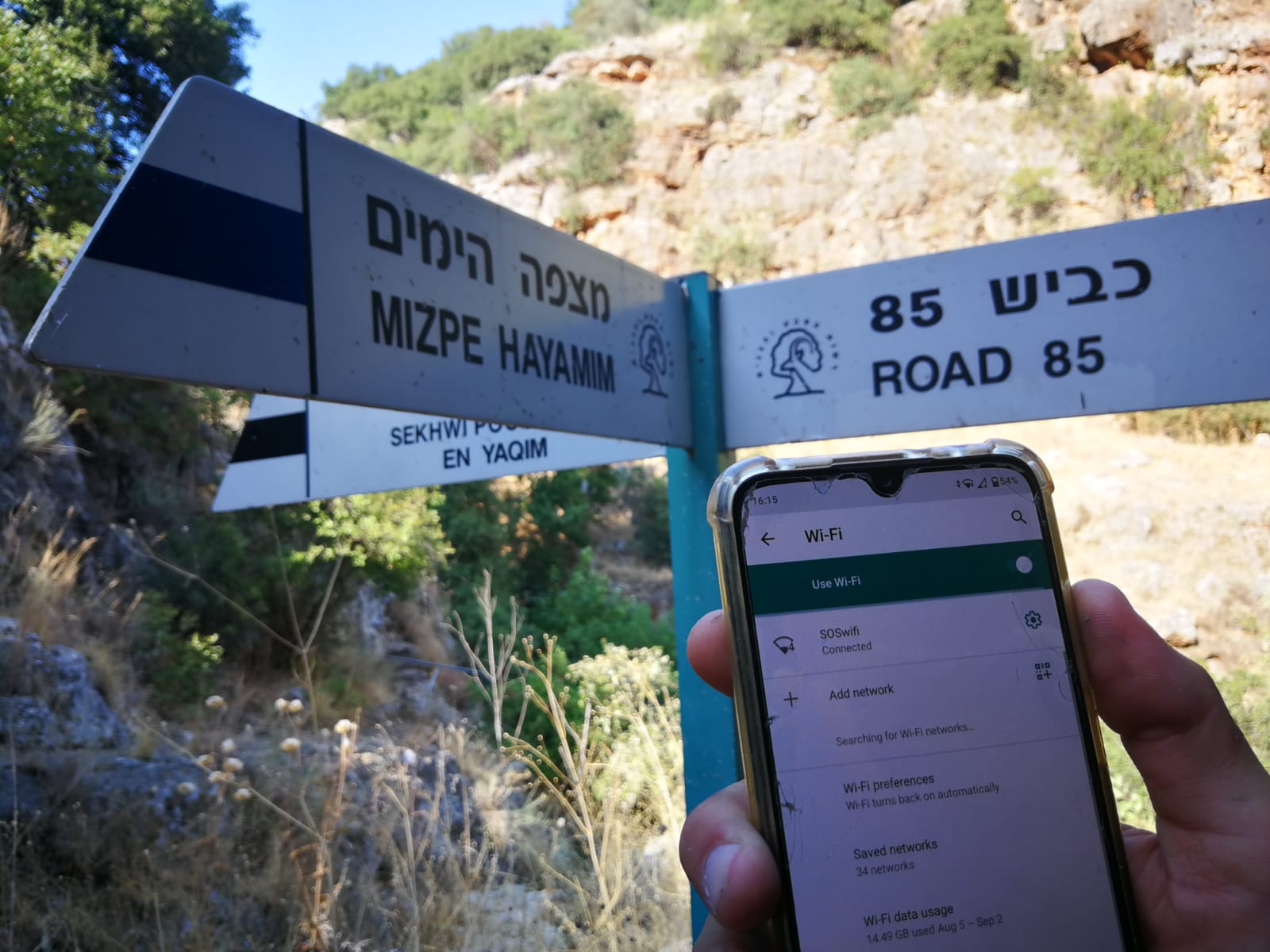 SOS WiFi is available at Nahal Amud in the Upper Galilee. Photo courtesy of Bein Hashitin

Bein Hashitin is not a rescue group. The 12-year-old educational enterprise runs programs — including three pre-army academies, a model farm and a “farmer for a day” experience – to introduce Israelis and tourists to the Arava Valley.

Here, along Israel’s scenic eastern border from the Dead Sea to Eilat, desert agriculture is a thriving business and hiking opportunities are plentiful. 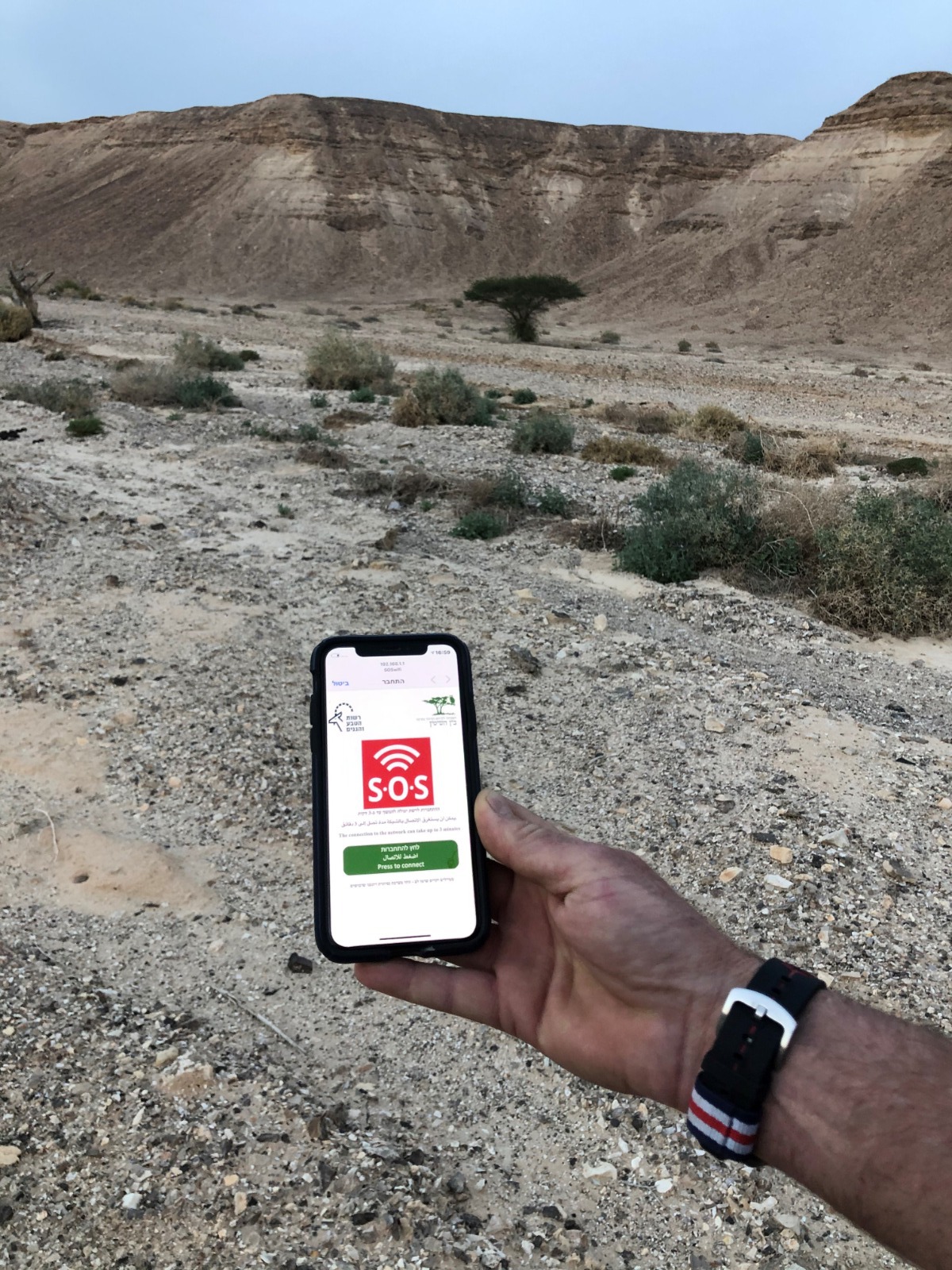 Getting an SOS WiFi signal in the Arava Valley. Photo courtesy of Bein Hashitin

“Hiker safety is not something we normally deal with,” says Avishai Berman, CEO of Bein Hashitin. “Our connection was a disaster that happened in 2018.”

On April 26 of that year, flash flooding in the usually dry Tzafit riverbed near the Dead Sea swept 10 teenage trekkers to their death.

An entrepreneur who supports Bein Hashitin asked Berman how they could make the hiking experience safer.

The first idea was a sensor that would send an alert to hikers’ phones about approaching flash floods. But that could not work in areas lacking reception, so Katzir turned his attention to emergency connectivity solutions. 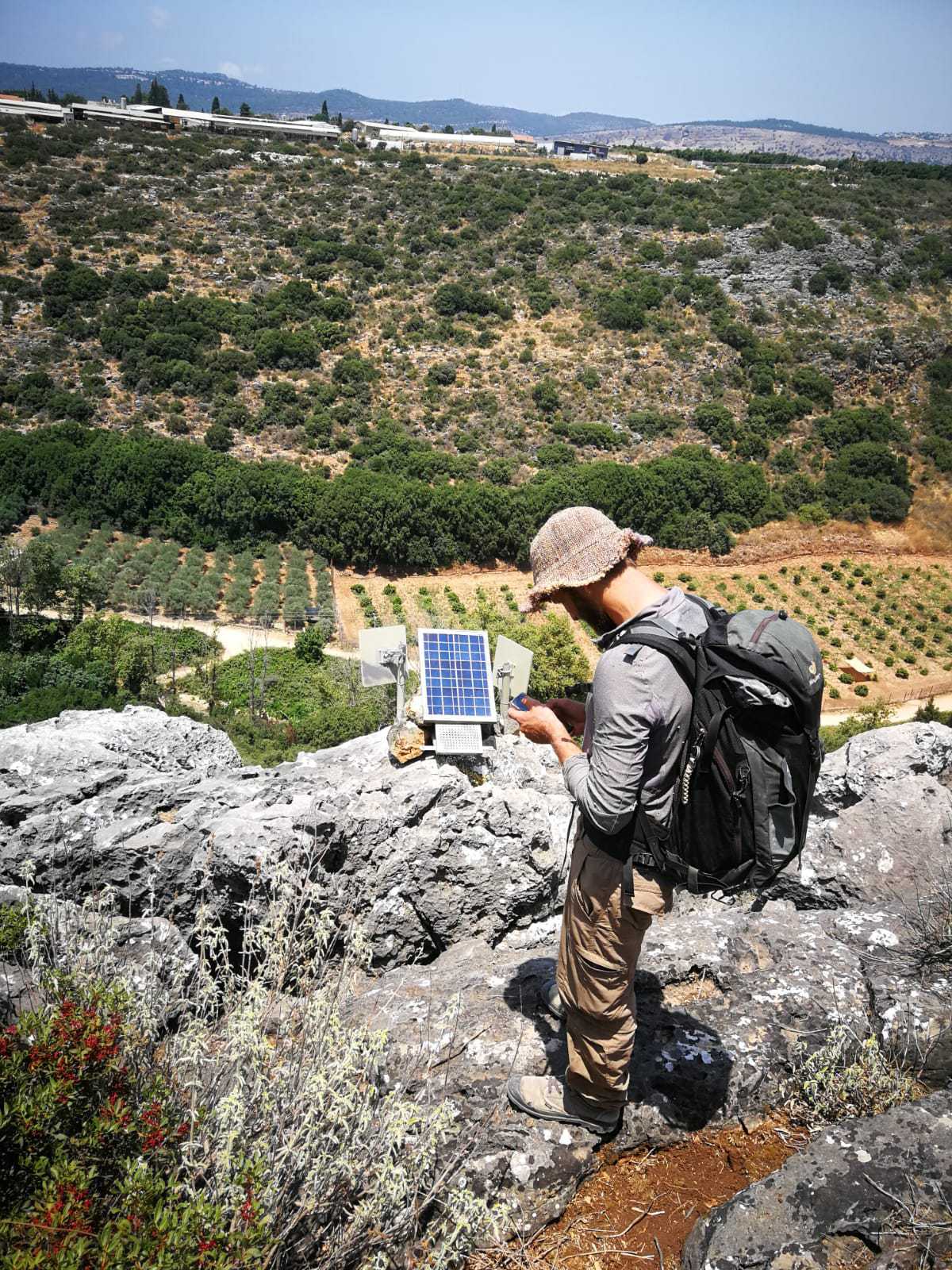 His research found that existing hotspot products were either meant for indoor use or required energy infrastructure.

“We didn’t find the off-grid, outdoor solution we were looking for, so we had to create it,” says Katzir.

A cadre of volunteers and paid consultants lent knowledge and expertise to developing the proprietary electronic circuits and coding that enable the solar-powered SOS WiFi to beam a signal for connectivity even on remote trails.

“We designed and manufactured our own product, and it is unique in the world,” says Katzir. “It can be in out in nature for up to two years without maintenance, and it’s totally off grid.” 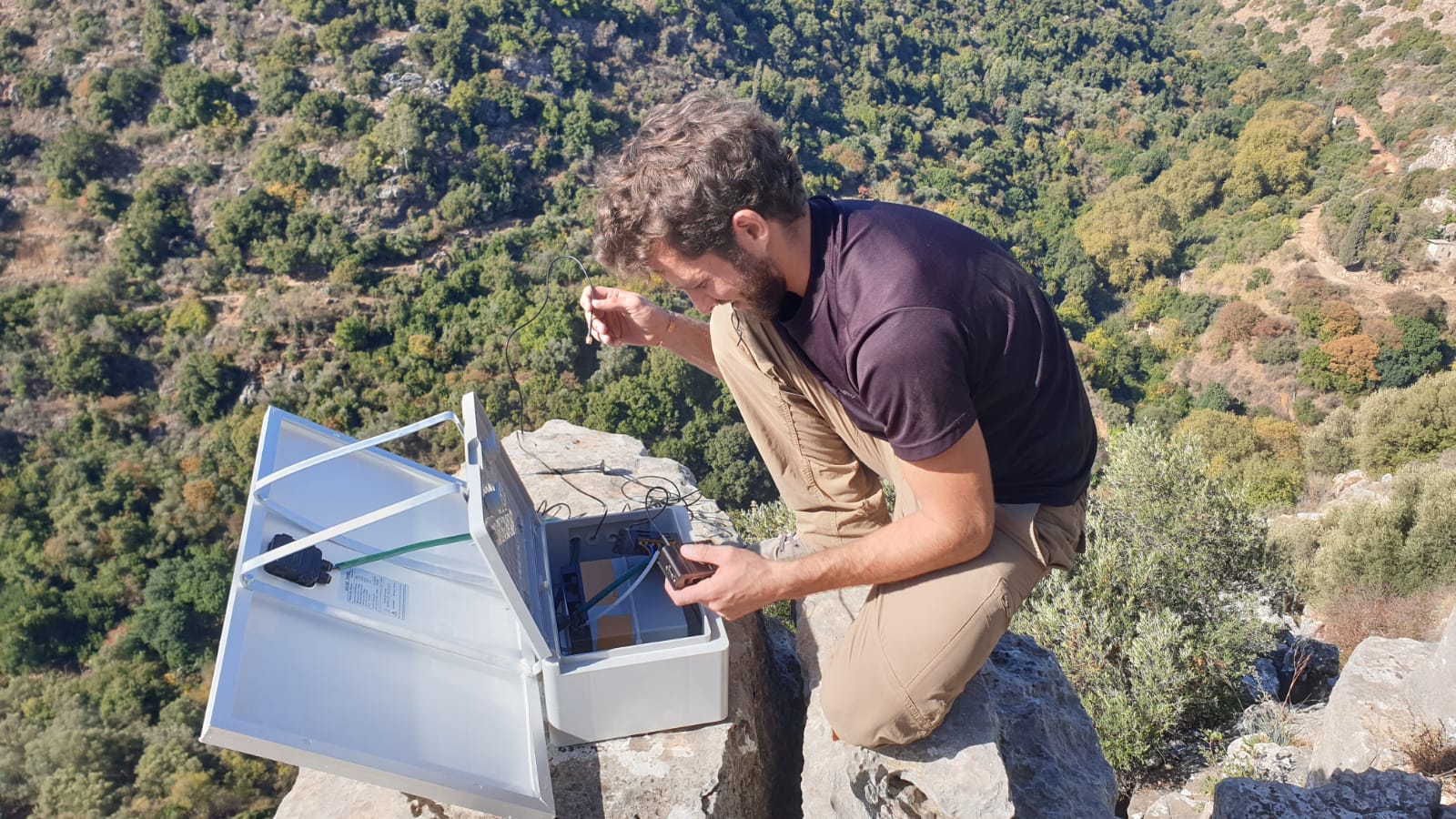 So far, 26 SOS WiFi stations have been installed along popular hiking riverbeds in the Galilee, Golan Heights, Judean Desert, Arava and Negev. 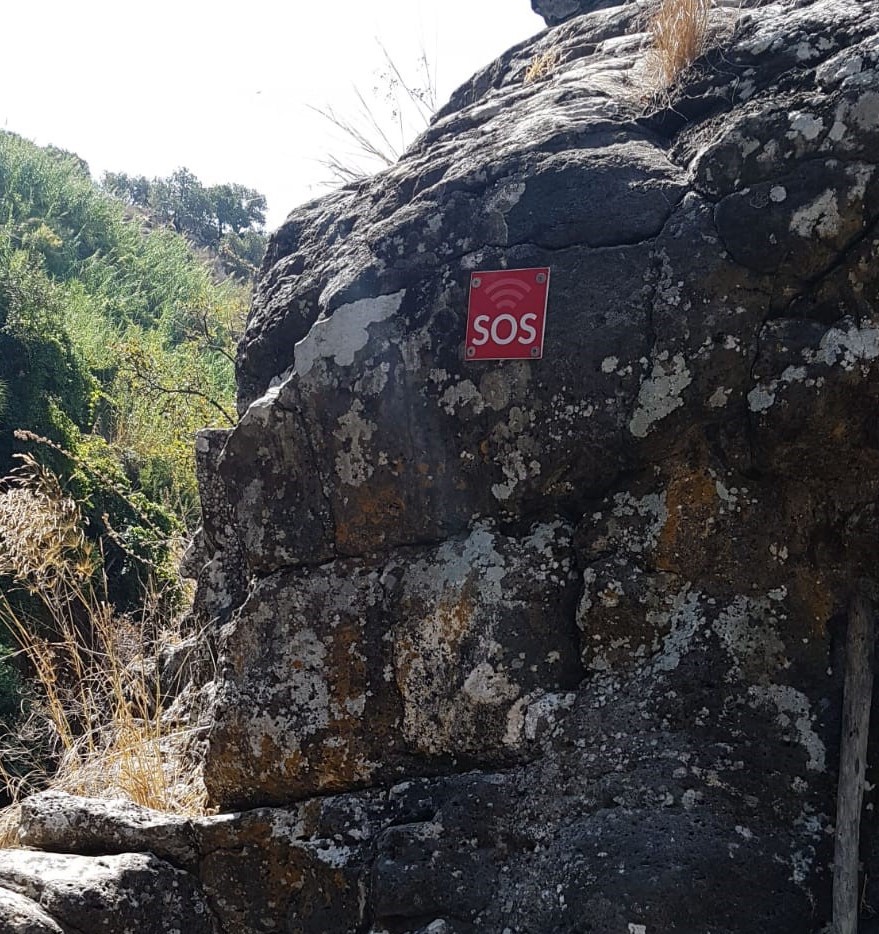 An SOS WiFi hotspot at Nahal Zavitan in the Golan Heights. Photo courtesy of Bein Hashitin

“We work side by side with rescue teams that tell us where these connections are needed most,” explains Rinat Rosenberg, vice CEO of Bein Hashitin.

“That’s how we decide where to put our systems. We know about some incidents that occurred in places with no communication and if it were there it could have helped.”

A Hebrew website provides information on each hotspot’s location. Bein Hashitin collects anonymous usage data and is continuing to fine-tune the system to assure reliable service.

Berman is seeking donations to install 40 more stations this year. And he’s already getting interest from abroad.

“We heard from a rescue team in Italy and sent them a presentation about SOS WiFi. They want to work with us and do a pilot of the system there,” says Berman.​