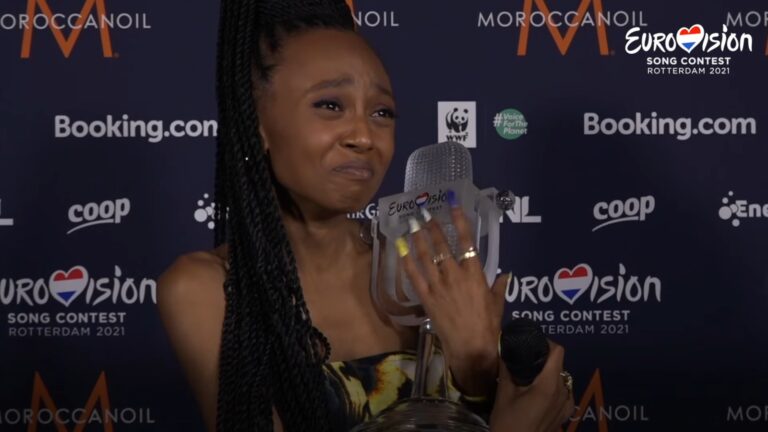 Eden Alene reacting to the news that she is a finalist in the 2021 Eurovision Song Contest. Photo: screenshot

In the midst of a war and civil unrest, Israelis rejoiced to learn that the country’s Eurovision contestant, Eden Alene, advanced to the finals as the 2021 song contest kicked off in Rotterdam Tuesday night.

Clad in a costume by Israeli fashion designer Alon Livne (who has also designed for Beyoncé), Alene’s rendition of “Set Me Free” included hitting the highest note ever achieved in a Eurovision performance.

Although anti-Israel protesters gathered outside the auditorium, Alene kept her cool.

“I feel like I’m going to explode because of the excitement,” Alene said in an interview with European media. “I’m so happy for my country because we deserve this. We’ve been through so much.”

In an earlier Instagram post, the Jerusalem resident wrote: “Every moment onstage it was impossible for me not to think of my loved ones and the nation I represent. I’m here in Holland, but my heart is always with you, aching, loving, supporting and worriedly following all that’s happening in Israel.”

The winner of the 2021 Eurovision Song Contest will be chosen from among 26 finalists on May 22.