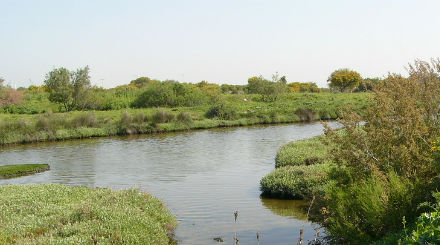 If you are paddling a canoe down one of rivers that flows through Israel to the Mediterranean Sea, you might want to hold onto your oars. Some of these rivers are full of sewage effluent, agriculture runoff, wastewater from animal farms and industrial byproducts.

The Kishon River, which flows from the Palestinian city of Jenin through the Haifa Bay, is one of the most polluted of them all. Oil refinery waste dumped into the Kishon is thought responsible for giving Israeli divers cancer. Recent conservation efforts on Israel’s part have greatly improved the river’s condition. But upstream it’s a different story.

Upstream, where the 70-kilometer river starts in Jenin, Palestinians rely on the river to carry away partly and poorly treated sewage. Open cesspits further downstream siphon into the river from the West Bank side, while heavy loads of fertilizers run off with every rain.

Michal Sagive, Israel coordinator for the Good Water Neighbors project, is heading a venture to help turn the brown Kishon River green. The ambitious eco-peace project was developed by the NGO Friends of the Earth Middle East (FoEME), and authorities on both sides are ready to dive into the idea.

An eco-park for the public

FoEME has proposed the creation of a cross-border eco-park between the communities of Gilboa in Israel and Jenin in the West Bank, “accessed by both sides in a way that both sides can spend time together,” Sagive tells ISRAEL21c.

Separate public parks are currently planned for each side of the fence, with the eventual aim that the two parks will join as one.

Complete with leisure activity areas, the park would encompass water rehabilitation systems that will clean the river on the Israeli side, and provide treated water to the Palestinian side.

Partially treated sewage from the Palestinian Authority, currently retreated as it passes through Israel, could go through a restorative wetland to aid the biodegradation of human waste, resulting in clean “gray water” that could be returned to the Palestinian Authority for crop irrigation. Or, in a more cost-effective but less perfect plan, the water would simply be treated by the Israelis and returned via a pipe.

Master plans have been drafted, and financing is being sought. Sagive says the project could be completed in a year’s time once the money comes through.

A catalyst for other green efforts

Savige relates that the Kishon was at one time Israel’s most polluted river, “mainly because of the dangerous material dumped downstream [by Israel] in the Haifa industrial zone. It was a big scandal when some divers from the army dived there for training and one after the other starting suffering from cancer.”

Since that scandal, a significant amount of money has been put into the Kishon by the Israeli government in cooperation with the Kishon River Authority. Fish and aquatic plants are returning to the once-dead waters, and $56.5 million is being invested in efforts to dredge and treat the refinery residues from the river and to develop a 148-acre recreational center along the Kishon banks.

“The situation is much better now,” says Sagive. “But that’s downstream. No one is doing anything upstream. What we are trying to do there is to advance a plan for rehabilitating a seven-kilometer segment of the stream, the segment that starts in Jenin and crosses the Green Line.”

The West Bank city of Jenin and the Gilboa Regional Council in Israel have committed to supporting the idea, intended to be first in a string of joint projects.

Water is a life force, and in the Middle East it is certainly an important element for peacemaking.

UNCOVER ISRAEL - Get the ISRAEL21c
Weekly Edition free by email
Sign Up Now!
Bring Israel's story to life.
Millions of people around the world rely on us to gain a deeper understanding of Israel. We are the trusted source for original content you won't find anywhere else.
You can make a difference. Donate today to support journalism that brings Israel’s story alive.
SUPPORT ISRAEL21c
Read more on:   Eco-Living, Environment