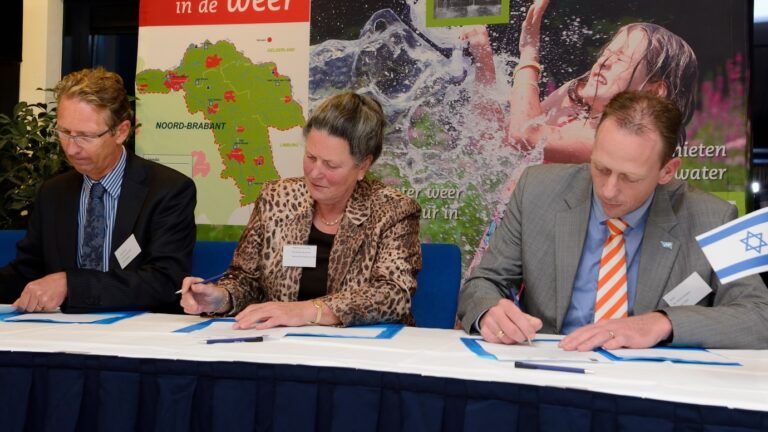 Erik van der Werf, from Holland's Ministry of Economics, Francien van de Ven, member of Aa and Maas executive board, and Michiel Adriaanse, from the Competence Center of Paper and Board, sign a collaboration agreement.

A Dutch government delegation is headed to Jerusalem to boost economic cooperation between Israel and the Netherlands and highlight business opportunities between the two countries.

Prime Minister of the Netherlands, Mark Rutte, will visit Israel on December 8-9, 2013, to officially launch a ‘Netherlands-Israel Cooperation Forum’, together with Prime Minister Benjamin Netanyahu.

The Dutch prime minister will be accompanied by three cabinet ministers and four economic delegations. “It is quite unique to see so many Dutch cabinet ministers jointly visit another country”, said Ambassador of the Netherlands to Israel Caspar Veldkamp.

“Dutch companies are not coming over because their government is telling them to. Participants see concrete opportunities in cooperating with Israeli counterparts,” said Tom Vos, investment attaché at the embassy.

In related news, a collaborative agreement was recently signed in Amsterdam to install and study the benefits of Israel’s Applied CleanTech’s revolutionary Sewage Recycling System in a Dutch wastewater treatment facility and a Dutch paper mill.

“We are delighted to start our first project in the Netherlands and we hope that after a successful trial period, our sewage mining technology will be installed across the Netherlands ensuring a greener, power efficient future for generations to come,” said Applied CleanTech Chief Executive Officer Dr. Refael Aharon.

Job Rosenhart, Energy Advisor for Dutch Industry at Agentschap NL, said: “Aa en Maas water board, supported by Stowa and Smurfit Kappa Roermond Papier has chosen to cooperate with Applied CleanTech due to their unique solution and revolutionary approach to problem solving. In a broader sense, this agreement is strategic as it launches a new era of cooperation between Israel and the Netherlands in water and energy. We view this cooperation as strategic due to the cultural compatibility and complimentary needs and abilities of both peoples, and hope it would be the one of many such successful ventures between our two nations.”