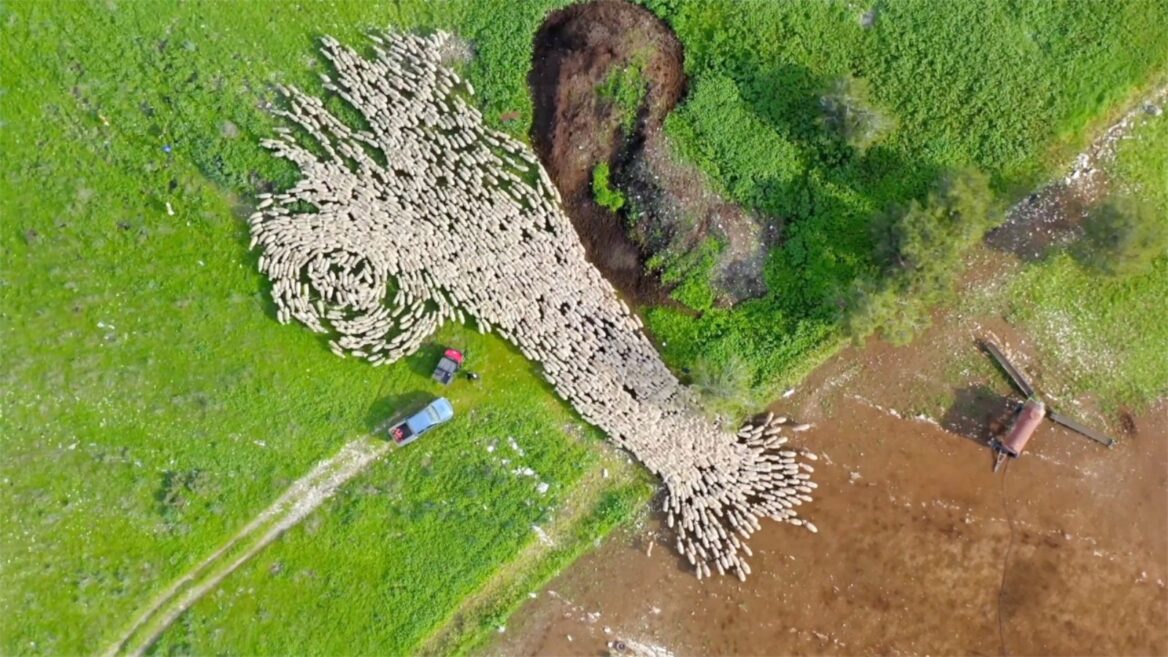 When Israeli commercial drone photographer Lior Patel posted a timelapse video of a huge flock of sheep moving through pastureland in northern Israel, he expected a few thumbs-up reactions from friends and colleagues.

To his surprise, this mesmerizing and magnificent moving image, posted on Facebook and Instagram June 25, has been viewed and shared by something like a million people around the world on various platforms. Local stations and even the BBC made a video about it.

“It’s been crazy. My notification tab looked like a waterfall, and I thought something was wrong with my computer,” Patel tells ISRAEL21c.

The 42-year-old Haifa resident took up photography just 12 years ago, and soon was participating in exhibitions and winning prizes.

“Then consumer drones came out and I thought that would provide a different dimension to my photographs. I immediately fell in love with seeing things from above that you only could have seen from a helicopter or from the top of a tall building before drones. It was suddenly accessible and convenient,” he says.

After getting a license from the Civil Aviation Authority, Patel launched a career in commercial drone photography five years ago. His customers include companies, media organizations and government agencies.

“Sometimes it is used to explain and visualize, for example an insurance claim if there’s flooding in an agricultural field. Sometimes it’s to promote business. But mostly it’s for the new perspective,” says Patel.

Between assignments, Patel takes on personal projects “just for my spirit and so that I will have something to submit to exhibitions.”

With more time than usual on his hands during the pandemic, he decided to take some footage of sheep grazing, and asked his farmer friends to connect him with a flock owner.

“I knew the movement would look fantastic from above,” he says. 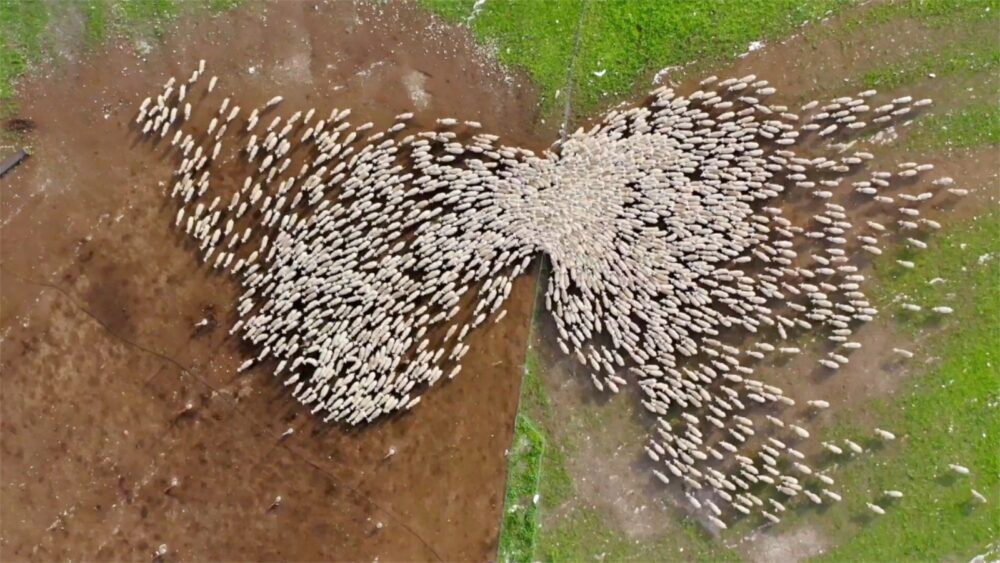 Patel was put in touch with South African émigré Keith Markov and cabbage farmer Micha Morgan, whose herd in Peace Valley near Yokne’am ranges from 1,000 to 1,700 sheep at any given time. He asked if he could come and photograph for two or three hours.

“I took the drone up and the minute I saw the formation of the flock as it moved, it hit me that I would be up there for a while,” he recalls. 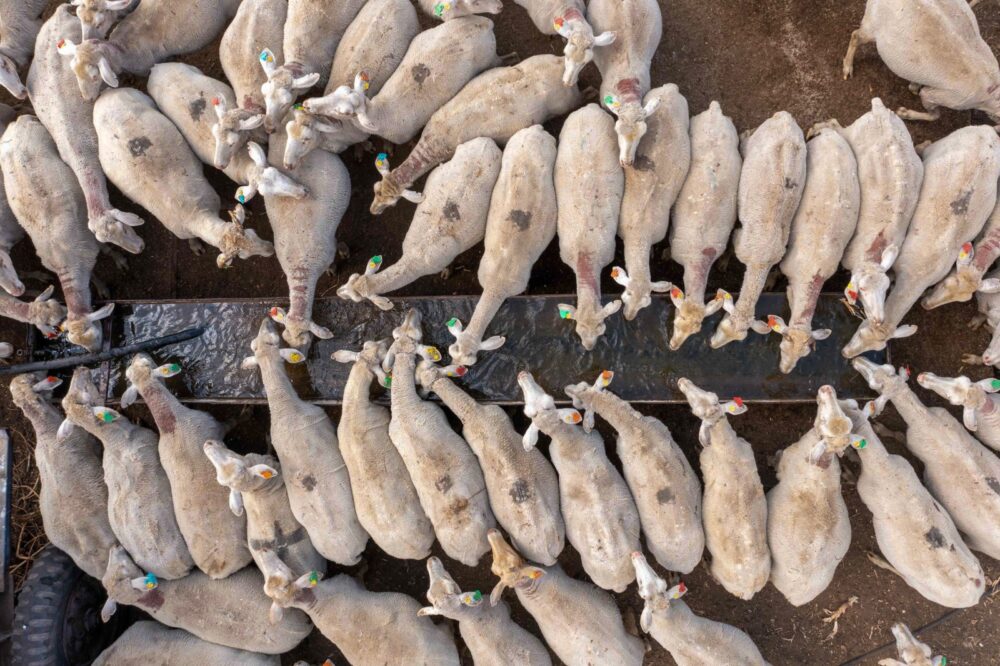 Sheep watering at the trough. Photo by Lior Patel

“A while” turned into seven months, from early January to late June.

“I didn’t know what I was getting myself into. It became a small obsession,” he admits.

Each clip was filmed in four to seven minutes. The finished movie goes chronologically, so first we see the sheep grazing on green winter fields and then on yellow summer fields about four miles away. The patterns of movement as seen from above are extraordinary. 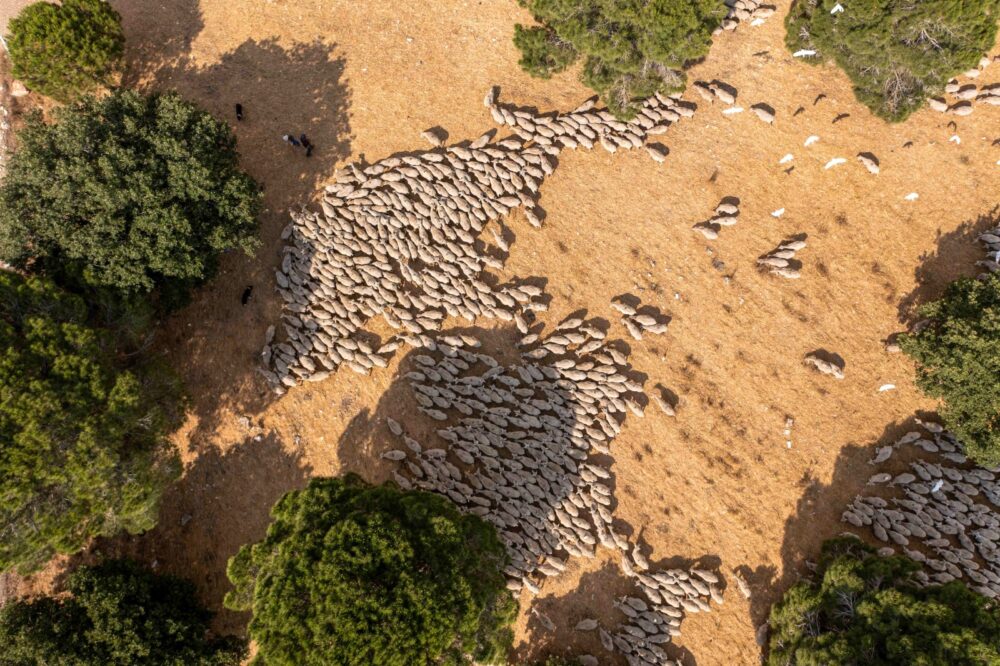 Over the course of his project, Patel learned an awful lot about sheep from Mustafa Tabash, the flock’s chief shepherd. The men would start their day over a cup of coffee. Among the countless emails and messages Patel has received in the past month are inquiries from universities and animal behavior institutions in Europe and the United States, seeking to buy the entire block of beta to aid research into crowd management and how things move. He’s been offered distribution deals.

But the father of two has his eye set on entering the fast-motion timelapse video into exhibitions in Israel and abroad, eager to share with others the rare perspective he achieved from above.

Two more drone videos made by Patel show maritime activity at Haifa Port and progress at a construction site.

UNCOVER ISRAEL - Get the ISRAEL21c
Weekly Edition free by email
Sign Up Now!
Bring Israel's story to life.
Millions of people around the world rely on us to gain a deeper understanding of Israel. We are the trusted source for original content you won't find anywhere else.
You can make a difference. Donate today to support journalism that brings Israel’s story alive.
SUPPORT ISRAEL21c
Read more on:   Spotlight on Israel, Environment, Israeli photographers, sheep, Lior Patel