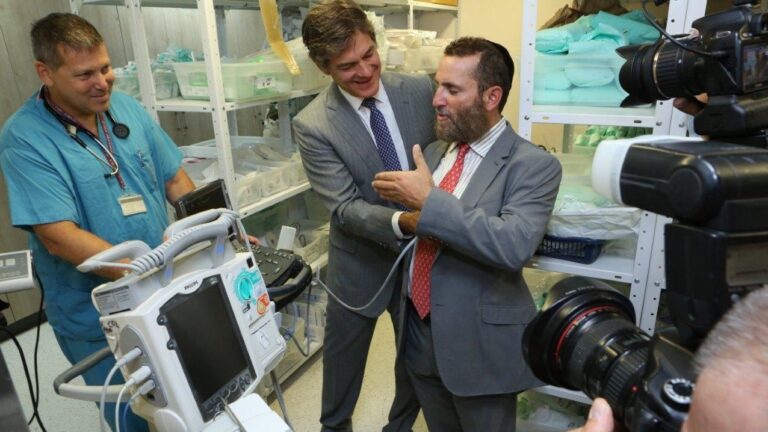 America’s favorite physician, Dr. Mehmet Oz, and Rabbi Shmuley Boteach, recently wrapped up a 10-day tour in Israel that included all the main tourist sites and a stopover at the world’s largest and most advanced “fortified hospital” at Rambam Medical Center in Haifa.

Upon entering the underground hospital, Dr. Oz said that it “speaks to how we need a holistic place for healing, which means a hospital’s commitment to giving [patients] peace of mind in all conditions, including wartime.” He added, this facility “also means giving you peace of mind when you go to the hospital in wartime that you are in a healing environment.”

“I learned about Rambam several years ago and its rich tradition in innovation,” Dr. Oz said. “Rambam is entrenched with a culture of a heterogeneous mix of Arabs and Israelis – a microcosm of what it should be like in the whole world… Rambam is a model of coexistence,” Dr. Oz told hundreds of medical specialists and fans.

During his much-hyped visit to Israel, Dr. Oz — who first came to prominence on The Oprah Show, also met with Prime Minister Benjamin Netanyahu.

“I was encouraged by how passionate the Prime Minister was about Israeli-Turkish relations and how insightful he was about the need for these two countries to become closer allies. He has a true heartfelt affinity and deep respect for Turkey. Working together, Israel and Turkey can help stabilize the Middle East and build bridges towards prosperity,” he said in a statement.

Dr. Oz’s 10-day itinerary also included visits to the Western Wall, Masada, the Dead Sea, the Dome of the Rock, and the Tomb of the Patriarchs.

“I am delighted to travel to Israel, especially being accompanied by my wife Lisa and my four children and my son-in-law. Being of Turkish and of the Muslim faith, I have always appreciated the deep ties and friendship between the Turkish people and the Israeli people. Being an American I appreciate Israel’s friendship with the American people and my own close friendship with the American Jewish community. I am grateful to my dear friend Rabbi Shmuley for organizing this trip and equally grateful to Miriam and Sheldon Adelson for their unparalleled generosity in helping to facilitate this trip and making it possible,” he said in a statement.

UNCOVER ISRAEL - Get the ISRAEL21c
Weekly Edition free by email
Sign Up Now!
Bring Israel's story to life.
Millions of people around the world rely on us to gain a deeper understanding of Israel. We are the trusted source for original content you won't find anywhere else.
You can make a difference. Donate today to support journalism that brings Israel’s story alive.
SUPPORT ISRAEL21c
Read more on:   News, Dr. Oz, Dr. Mehmet Oz, Oprah, Rambam Health Care Campus