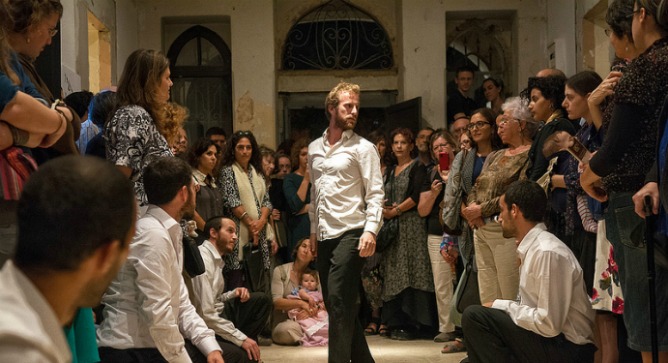 If the dance movements of Israel’s Ka’et Ensemble bring to mind the rhythmic swaying of Orthodox prayer, that’s by design. Ka’et (“Right Now”) is a unique troupe of religious men who merge the worlds of Jewish spirituality and movement.

When dancer-choreographer and movement teacher Ronen Izhaki first saw the seeds of this unusual genre in a group of yeshiva students preparing a performance at the Akko Theatre Center nearly 14 years ago, it immediately transported him emotionally to the boredom he associated with the synagogue of his childhood.

“I didn’t like it at first. But after 15 or 20 minutes I fell in love with the movement language, and it took another few weeks to fall in love with the people,” Izhaki tells ISRAEL21c at Jerusalem’s Ephron Dance Center after a rehearsal of the ensemble’s newest performance piece, “Beggars’ March.”

Seven years after choreographing for those yeshiva students, Izhaki was approached by some of the young men to teach them. Eventually he founded a dance theater school for men, Kol Atzmotai Tomarna (“All My Bones Shall Say,” from Psalm 35) and became the director of Ka’et for some of his most talented disciples.

“It happened slowly, from the bottom up, without any big vision,” Izhaki explains. “I was slowly seduced to move from my other projects and put my energy into this.” 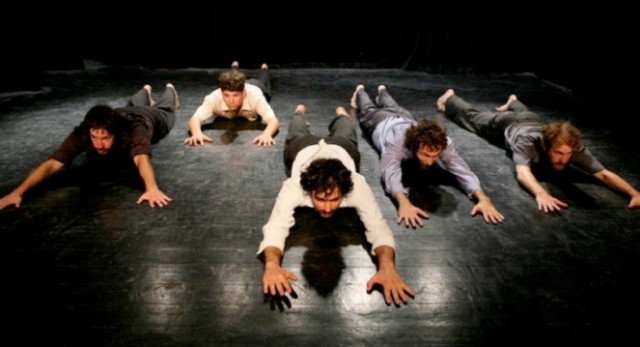 Ka’et will perform on October 30 at the DocDance Festival in Jerusalem; and December 18 at the Jaffa Port.

The nine-man ensemble performs its repertoire in Israel and abroad. Its signature piece, “Highway No. 1,” was choreographed by Izhaki and his wife, Tammy. They named it for the road connecting Tel Aviv (representing secular Israeli life) and Jerusalem (representing religious life).

In the New York Times, Janice Ross described “Highway No. 1” as “a spare yet emotionally rich work that takes gestures from daily prayer movements along with chants and synagogue attire, and gently shifts and reframes these elements as postmodern dance.”

“The movement language is totally new,” says Izhaki. “Nobody ever saw anything like this on stage.”

Schwartz, 32, and the other original members were students at Herzog College, a teachers training institute, when they began taking lessons with Izhaki.

Schwartz tells ISRAEL21c that he was always interested in movement, such as tai chi and yoga. Progressing to dance was a bold move for a bunch of religious guys, as documented in a film about the troupe, Thou Shalt Not Dance.

“My family comes to all the shows but doesn’t understand what brought me to it,” Schwartz says.

Ogen says his wife is supportive, though his father has never attended a performance. A former member said it took three years for his family to appreciate his desire to dance. 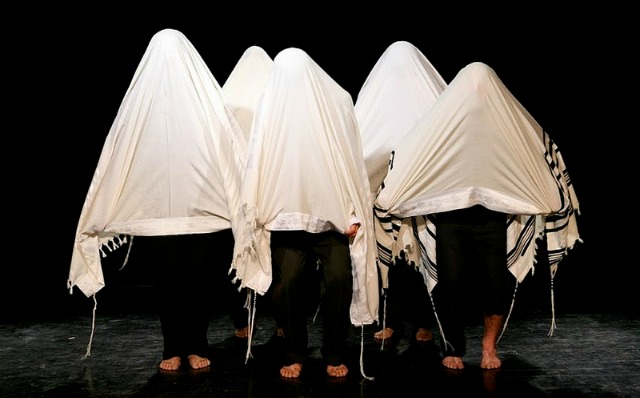 For Chisdai, 28, joining Ka’et was the next step in a process that began after his army discharge. “My music preferences changed. I started to see colors I never saw before, and I started thinking about dancing – I don’t know why,” he tells ISRAEL21c.

A female dancer friend told him about Ka’et and he came to some performances.

“I saw a language I did not understand and that nobody had ever told me about,” says Chisdai.

The men are among hundreds who have taken classes at Kol Atzmotai Tomarna. “Till not long ago, the best chance for a religious male to move was while attending a wedding or participating in [martial arts],” Izhaki says.

“There is nothing else like Ka’et,” says Schwartz. “We want our audience to develop a new connection to the body, a new language that speaks to the body, something Jewish and Israeli.”

Izhaki enjoys seeing audience reactions to Ka’et. “They are very touched,” he says. At Jerusalem shows, about 70 percent of the viewers are religious, while in Tel Aviv about 70% are not.

To Izhaki, this illustrates the need for a piece like “Highway No. 1.”

Speaking in a metaphor, he says of the actual road: “I think Highway No. 1 is too narrow. We need another 10 lanes in each direction. We need a way to connect.”

Kol Atzmotai Tomarna and Ka’et Ensemble aim to be additional lanes in that cultural highway, built by men and open to all.

UNCOVER ISRAEL - Get the ISRAEL21c
Weekly Edition free by email
Sign Up Now!
Bring Israel's story to life.
Millions of people around the world rely on us to gain a deeper understanding of Israel. We are the trusted source for original content you won't find anywhere else.
You can make a difference. Donate today to support journalism that brings Israel’s story alive.
SUPPORT ISRAEL21c
Read more on:   Culture, Visual Arts, Entertainment, dancing, Dance in Israel