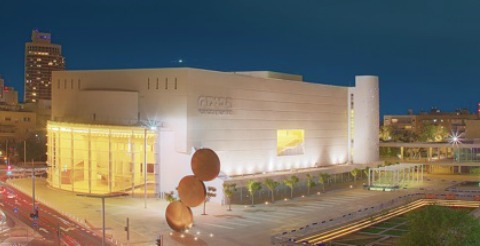 The stage was set in Vilnius, Lithuania, 1905: Young Jews eager to explore their lost identity and culture founded Habima (“The Stage”), the first Hebrew-language theater ever — a huge milestone despite the fact that the first play was a flop. The theater company then moved to Moscow and faced continual persecution from successive governments. Over the years, Habima went through various incarnations, and by the late 1920s, the troupe moved to Israel kit and caboodle via New York, leaving some members behind in the United States.

Performing in Yiddish and in the modern Hebrew reinvented by Eliezer Ben-Yehuda and embraced by young intellectuals returning to the Jewish homeland from Europe, Habima would become the state’s first theater to adopt the revived language uniting immigrants from across the Diaspora.

“It is the center of culture in Israel,” says Habima’s spokesperson, Osnat Chen, to ISRAEL21c. “It is the national theater of Israel, and it is also the first Hebrew theater for artists, even the foundation for the beginning of the Hebrew language.”

More than 100 years since its creation — about 65 years since the Habima Theater was built by architect Richard Kaufmann in Tel Aviv — Habima was exiled again, but this time for a good cause: a $26 million renovation by architect Ram Karmi, along with new public space by the world-recognized environmental architect Dani Karavan. The Tel Aviv-Jaffa municipality contributed $15 million toward the project.

A green plaza connecting Habima to the Mann Auditorium and the Helena Rubinstein Pavilion of Art. Together they comprise Tel Aviv’s Culture Square, modeled after Lincoln Center in New York City.

The new space was dedicated in November with a performance of Hanoch Levin’s Morris Schimmel, and the gala opening took place in January.

Throughout this year, Habima is working with the municipality to present a festival of plays as part of the city’s Art Year, kicked off by the opening of the new wing at the Tel Aviv Museum of Art.

“We feature some very special plays,” Chen relates. “Some have subtitles [in English] and they offer special repertoires which talk about war and peace, Arabs and Jews, new immigrants to the country, Jewish history, the Holocaust — all these things that are connected to the Israeli identity. But we also perform classics too, like Shakespeare and Moliere.”

The few first plays that premiered in Israel’s Habima Theater were Der Oytser (The Treasure), performed in Yiddish by the iconic playwright Sholom Aleichem; The Crown by David Calderon, which premiered in Tel Aviv in 1929; and most famous of them all, The Dybbuk starring Hana Rovina, a play about the Jewish concept of exorcism that many believe embodies the very essence of both Jewish and Israeli theater.

By 1946, Habima had a permanent home in Tel Aviv. Today about 80 actors and 120 staff work to support its ongoing productions, open to the public including schoolchildren from the central and peripheral regions of Israel.

Plays like Beaufort, based on the novel by Ron Leshem about the First Lebanon War, cut to the heart of the Israeli identity. Other plays by Israel’s most celebrated playwright, the late Shalom Hanoch, give insight into the quirky characters and personalities of Israel. Some plays are based on the stories of the much-loved author Amos Oz.

The oldest cultural institution in Tel Aviv, Habima is one of many being refurbished by the municipality for Art Year. Among the institutions that have already been renovated are the Cameri Theater, Beit Lessin Theater, Israeli Opera, Gesher Theater, Bialik House, Beit Ha’Ir, Rubin Museum, Gutman Museum, Cinematheque, the Tel Aviv Museum of Art and the Stricker Conservatory. Work is still ongoing at the Mann Auditorium and Independence Hall.