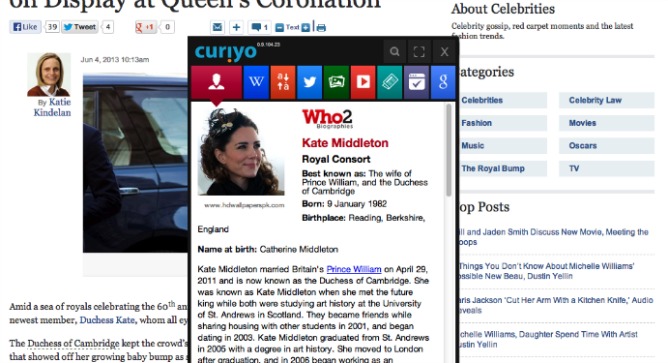 The latest product from the Israeli founder of Answers.com makes it easier for Web surfers to get the information they need with a minimum number of clicks.

Bob Rosenschein named his new startup Curiyo because “we curate information from across the Web and put it together for you,” he tells ISRAEL21c in a perfect elevator pitch.

A simple WordPress plug-in (or a line of Javascript) “Curiyo-ifies” a site and the end user doesn’t have to install a thing. When Curiyo identifies an interesting term or topic in an article, it displays a subtle underlining in the text. These keywords are picked up automatically, based on Curyio’s quick analysis of the content of the site.

Hold the mouse down (or your finger for the upcoming mobile version) on the highlighted words and a pop-up window appears with useful information.

For example, long-click on the word “Jerusalem,” and Curiyo displays a multi-tabbed box with information from Wikipedia, Google (search, maps, Google Translate, pictures and news), Twitter and YouTube. If you’d searched for a movie, IMDB would be one of the tabs. Try the New York Yankees, and ESPN will be there.

Over more than 20 years, entrepreneurship in Jerusalem and the name Bob Rosenschein have gone hand in hand.

Rosenschein opened Accent, one of the first software companies in the capital, in 1991, with his brother Dr. Jeff Rosenschein, and worked directly with Microsoft to bring right-to-left Hebrew and Arabic text handling to the company’s flagship Windows. For that, he won the Israel Prime Minister’s award for software achievement.

He later started Answers.com, which employed hundreds of Jerusalemites during Rosenschein’s 12-year tenure at the company and consistently ranked in the top 20 websites worldwide. He took the company public and eventually sold it in 2011 for $127 million.

Rosenschein, 60, could have just retired and enjoyed his four children and two grandchildren. But he was having too much fun, he tells ISRAEL21c. “I love startups. It’s tremendously rewarding starting a new company and product. I had to jump back in.”

The browser extension is a classic consumer play, but Curiyo is counting on most of its adoption coming from an even sexier business-to-business offering, which provides the same basic technology to content owners – Web publishers and bloggers in particular.

A publisher who installs Curiyo receives an additional tab with internal links to content that appeared on that publisher’s site. It’s a way of regaining access to a huge amount of information that normally gets lost on big sites, Rosenschein says.

All of this might not be possible if it weren’t for advances in mobile technology. The size of the pop-up window that Curiyo displays in the desktop browser is the exact dimensions of an iPhone screen. That’s no accident. Curiyo draws its content from the mobile-specific versions of popular sites.

While it would have been possible to build the product by scaling and compressing full-size web pages, this makes it so much simpler, Rosenschein says. (On the iPhone itself, the Curiyo window will appear as a new browser tab.)

Curiyo sports some other nifty tricks: borrowing a page from Twitter, users can “follow” other Curiyo publishers.

Let’s say you visit a site about Israeli movies that already has the Curiyo plug-in. Then you go to a news site that’s also using Curiyo, which is featuring an article about a new Israeli movie. One of the Curiyo tabs that opens when you click on the name of that movie on the news site might be for the first site you visited.

Rosenschein says he’s still working out how the following and permissions will work, but the catchphrase is already ready: “Own your keywords even on other sites.”

Curiyo also hooks into social media and Google News, so information is not static the way that it might be if Curiyo only curated encyclopedia or dictionary entries.

Rosenschein is aware that if the Curiyo plug-in slows down the load time of a website, publishers will quickly abandon the product. And if it’s too “in your face,” with garish colors and automatic pop-ins, users will flee too.

So although he plans to make money on the business by eventually offering ads on Curiyo, he pledges that they will be presented “in a subtle and non-intrusive way.”

“Curiyo’s primary monetization will come through working with partners,” he adds.

Curiyo has raised just shy of $1 million, from two sources: Cedar Ventures and OurCrowd — whose CEO, Jon Medved, used to work for Rosenschein at Accent.

We asked Rosenschein, who grew up in Harrisburg, PA., graduated from the Massachusetts Institute of Technology in 1976, and made aliyah in 1983, if he felt that moving to Israel affected the entrepreneur he eventually became. He pauses for a moment, then shakes his head no.

“I probably would have gone into business even if I didn’t make aliyah,” he says. Indeed, he had some good exposure, meeting Microsoft’s Bill Gates in the early 1990s.

“But Israel in many ways makes it easier. Israelis as a culture love to question things, and that’s part and parcel of the environment that startups need. In Israel, much like in Silicon Valley, failure is not always tragic. I think if I lived in a culture where risk was frowned upon, it would be a lot harder.”

Will Rosenschein’s third time out prove to be as successful as the previous two? If you’re curious, just open a Curiyo window on “Bob Rosenschein.” There are seven tabs of instant information all about this hardworking Jerusalem business pioneer.

UNCOVER ISRAEL - Get the ISRAEL21c
Weekly Edition free by email
Sign Up Now!
Bring Israel's story to life.
Millions of people around the world rely on us to gain a deeper understanding of Israel. We are the trusted source for original content you won't find anywhere else.
You can make a difference. Donate today to support journalism that brings Israel’s story alive.
SUPPORT ISRAEL21c
Read more on:   Internet, Bob Rosenschein, Technology, Wordpress