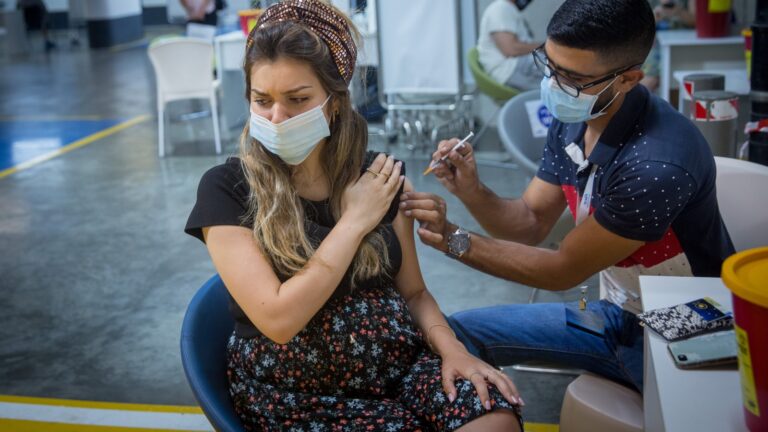 A pregnant woman receives a Covid-19 vaccine in Givatayim. Photo by Miriam Alster/Flash90

Several international studies have found the risk of fetal death during late pregnancy doubles when the mother is sick with Covid-19.

Now we know the reason for this disturbing phenomenon: sometimes the SARS-CoV-2 coronavirus severely damages the placenta as it passes from mother to baby.

The study, led by Dr. Eran Barzilay, head of the Obstetric and Gynecological Ultrasound Unit at Samson Assuta University Hospital in Ashdod, was published in the International Journal of Gynecology & Obstetrics.

“SARS-CoV-2 vertical transmission with confirmed placental infection, confirmed by whole genome sequencing of the virus, may be a contributing factor to fetal demise,” concludes the paper coauthored by Barzilay and 13 colleagues.

Barzilay told the Jerusalem Post that four Assuta patients experienced late pregnancy loss at the same time as they were diagnosed with the virus. None of the four was vaccinated against Covid-19.

The Assuta team’s pathological tests found the virus had infected the placenta and the fetus in all four cases.

“We can say that infection did cause fetal death and that the death was caused directly by the placenta,” Barzilay told the JPost, adding that his team had “never seen this kind of damage to the placenta from a virus. It seems to be something specific to corona.”

Said Barzilay, “Even if the mother had very mild disease and mild symptoms and her PCR test was positive but showed low levels of viral infection, the placenta [had] a high viral load.”

However, the placenta does not become infected in every pregnant woman with Covid-19. The risk seems to be greater in the third trimester.

UNCOVER ISRAEL - Get the ISRAEL21c
Weekly Edition free by email
Sign Up Now!
Bring Israel's story to life.
Millions of people around the world rely on us to gain a deeper understanding of Israel. We are the trusted source for original content you won't find anywhere else.
You can make a difference. Donate today to support journalism that brings Israel’s story alive.
SUPPORT ISRAEL21c
Read more on:   News, Health, COVID-19, Pregnancy