A new youth convention in Israel this summer is attracting Muslims, Christians and Jews who aim to set a new global social agenda through circus arts.

The Association for the Development of Circus Arts plans a multicultural youth circus convention to kick off a new socio-political agenda.

Israeli Muslims, Jews, Ethiopians, Russians, Druze, Christians, youth-at-risk — and acrobats and clowns from an assortment of foreign countries — are all set to juggle, flip, clown and unicycle their way through the inaugural Youth Circus Convention in the Old City of Acco (Acre) from July 19-21.

This unusual “Circus Arts for Social Change” project is the dreamchild of Hanita-Caroline Hendelman, director of the Israel Circus School and the Association for the Development of Circus Arts in the Galilee town of Kfar Yehoshua.

By interacting through the medium of circus arts, she explains, “we shall work together for three days in climbing the walls imposed by culture, social circumstances, religion and faith, which separate us from open, friendly relationships.”

Hendelman tells ISRAEL21c that her partner, David Berry, suggested calling the event “Climbing Walls.” This is an apt image for a circus convention, but it also acknowledges that walls between cultures and nations can more easily be climbed than broken.

With zero budget and only three months of preparation time, Hendelman managed to get pledges of participation and guidance from circus artists in Norway, France, England, Switzerland, Hungary, Germany and the United States.

Hendelman plans a colorful schedule of performances by youth circus groups and artists and a public street circus in the old port of Acre.

The circus school, based in a renovated community center since 2002, offers year-round professional training and provides a medium for meeting and communicating through circus arts. One of the association’s main projects is bringing together Jewish and Arab schoolchildren and youth at risk.

Hendelman works with Israeli partners including the Galilee Circus of the Galilee Foundation for Value Education; Circus Maghar in the Druze town of Maghar; and Efshar Acheret (Another Possibility). 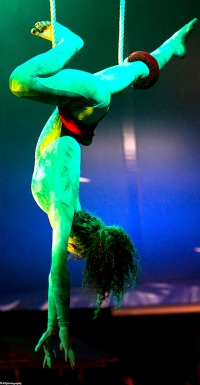 “I think art has the biggest potential for healing that I know of,” Hendelman says. “The Israel Circus School is a fully artistic and professional school for adults and children, but we involve all our students in our various multicultural projects.”

When she got word that the school and association’s British benefactors would be visiting in August, she began planning a modest convention at the site to demonstrate the association’s accomplishments. But she soon decided something bigger was called for.

“As long as we are small, working quietly in place, we can only do so much,” Hendelman explains. “As the world tumbles around us, what can we do? People answered our call and I realized a body of people care and want to take it a step further. To do that, you have to do something a bit more substantial.”

She is hoping the convention will kick-start a local and international network “focused on building a new socio-political agenda through innovative and creative means of resolving conflict situations and … creating a society that cares, honors and respects all its members; educating young people towards circus arts activism; and sharing, enjoying and enriching each other with the wonders and richness of circus arts.”

The event’s poster design was donated by an American graphic artist. An aerialist in Denver is staging a fundraiser for the event.

“Gestures are coming internationally,” says Hendelman. “Artists are saying, ‘Let’s do something to improve our society.’ This is only a pebble, a first step to what I envisage as building a new social agenda in all aspects of life.”

‘We can really move mountains’

Hendelman expects about 250 workshop participants and thousands of spectators under the circus tent. The event will be televised to Israeli, European and American viewers.

“This convention is a miracle, that in a short time with no budget, we are getting the gift of this beautiful space, the support of the Acco Council and hundreds of circus artists from Israel and overseas,” she says.

Afterwards, all the participants will be invited to start planning the next steps. Because to Hendelman’s way of thinking, all the tumbling and clowning has a much higher purpose.

“Art has an important mission as an agent for change, to spark inspiration and open people’s hearts to one another. Art has no boundaries or walls; it joins all people. Even with no budget at all, if our minds are clear and our intention is right, we can really move mountains.”