George Boyajian, VP for business development, tells ISRAEL21c that the company is about to close a deal with “a major global airline.”

Though the company’s proprietary process can use a variety of feedstocks, including pelletized wood waste or energy crops, Primus is focusing for now on cheaply obtained natural gas.

“We’re completing a full-scale demonstration plant in Hillsborough, which comes on line April 1 and will produce drop-in gasoline and/or jet fuel from natural gas. And then we expect to break ground for our first commercial plant in the fourth quarter of 2013,” says Boyajian.

Last June’s dedication of the $8 million demo plant, which can produce 33 liters of gasoline per hour, was highlighted by a test drive of an automobile fueled with 93-octane fuel made from natural gas and biomass.

The future commercial plant will produce annually about 25 million gallons of biofuel from natural gas-derived syngas, taking advantage of the low prices of domestically abundant natural gas. The cost of production is expected to be competitive with petroleum-based fuels.

The patented process used by Primus was developed by co-founder Moshe Ben Reuven, a Princeton University-educated engineer who is now CEO at Verdant Aerospace in Princeton, New Jersey. The same process can also produce aromatic chemicals needed for the production of plastics and rubber. “The chemical steps we go through in our process are well understood, but the method by which we implement them is unique,” says Boyajian. “What we’re doing is a big step in the evolution of making gasoline, and we make it more efficiently so we get greater yields at a lower cost. We have a very talented group of engineers doing R&D toward that goal.”

Much of the management staff at Primus is Israeli. President and Chairman of the Board Yom-Tov Samia, a retired two-star major general in the IDF, was formerly CEO of the Baran Group, the largest planning and engineering group in Israel. VP-Operations & Construction Arie Toren came up through the ranks at Rafael Advanced Defense Systems. Chief Technology Officer Eli Gal is a Technion-Israel Institute of Technology-trained expert in coal and biomass gasification processes, air pollution control, clean-tech and water treatment. COO Sam Golan was formerly general manager of Cimatron Israel.

Ben-Reuven began the company in 2007 with real-estate developer Shlomo Schattner, former deputy director of Israel’s Office of Budget Management. The two men put together Ben-Reuven’s expertise with Schattner’s connections in the Israeli corporate world, and the result was Primus Green Energy, solely funded and majority owned by IC Green Energy, the renewable energy arm of the publicly traded Israel Corporation. 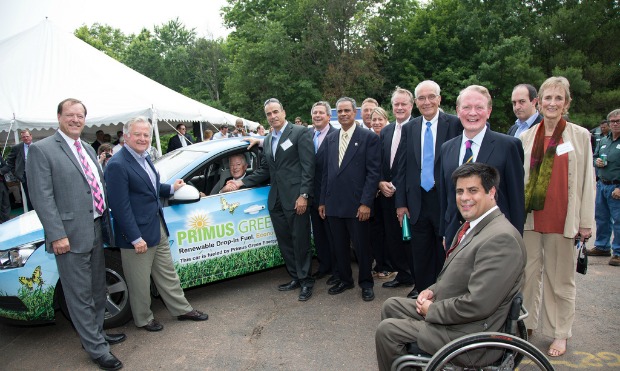 “Through a series of discussions and ultimately the investment from IC Green, they came to the conclusion that the best product to pursue was ‘drop-in’ gasoline,” says Boyajian. “There is no such thing as finished gasoline. It’s a blendable component to which they add ethanol, dyes and sometimes detergent.”

The fuels produced from the Primus STG+ technology are virtually indistinguishable from petroleum-based fuels and can be used directly in engines as a component of standard fuel formulas, he adds. The technology does not require any changes to engines, fuel delivery infrastructure or consumer behavior.

Boyajian, who holds a doctorate in geophysical sciences, explains that the Primus methanol-to-gasoline process results in converting high-yield syngas first into methanol and then into light high-octane gasoline without the need for separation or further treatment.

Most competitors using biological methods produce an intermediate product, such as biobutanol, which must be synthesized and refined before it can be used as fuel.

If the airline deal goes through, it may be possible for the Primus drop-in jet fuel to be certified in the next year or two for use in commercial jetliners. Meanwhile, IC Green Energy has invested another $12 million in Primus Green Energy, bringing its total investment in the company to $40 million.