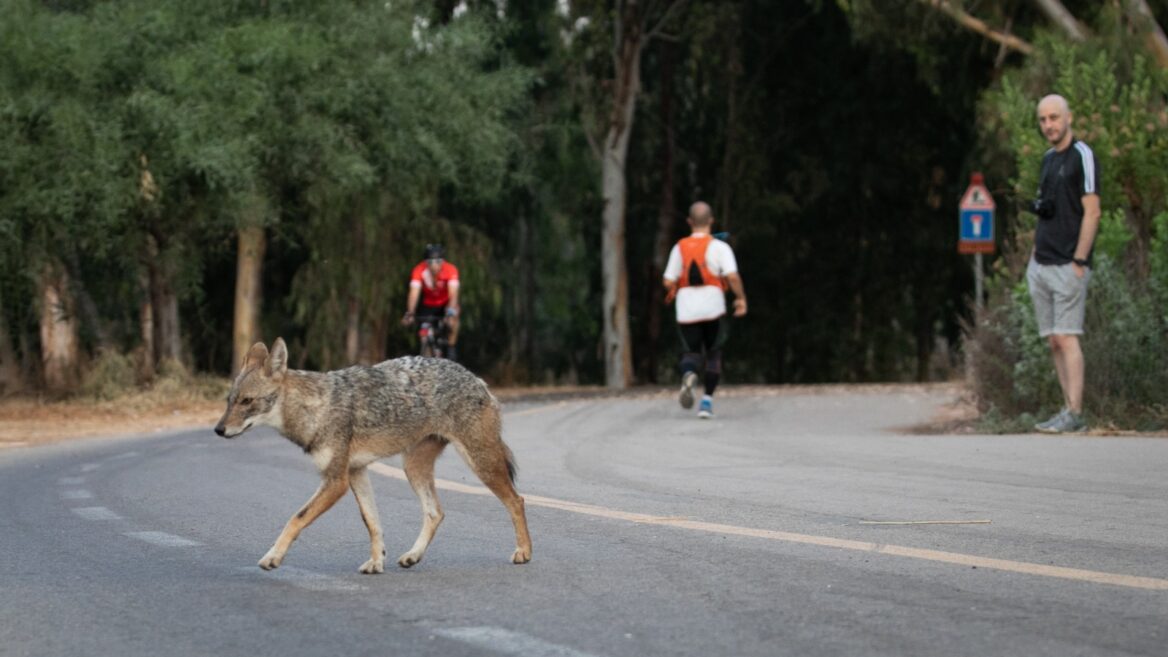 A jackal walking through Yarkon Park in Tel Aviv. Photo by Anat Hermony/Flash90

Global urban development is at an all-time high. And with that comes the loss of biodiversity, habitat degradation, and the increased frequency of deforestation practices.

Many wild animal populations relocate and integrate themselves into the encroaching urban landscape, upon which many species are completely reliant.

Their inevitable encounters with people are traditionally met with disdain.

However, a team of researchers has designed a project that bridges the relationship gap between humans and city-dependent animals to transform feelings of disgust to feelings of acceptance.

The Synanthrope from New York to Tel Aviv

A series of immersive audio experiences connects and explores the often overlooked relationship dynamics between people who live in urban-dominated areas and the synanthropes — creatures and plants that benefit from living in those artificial habitats.

So far, Nissim’s art-and-science blended work has largely focused on New York City. There are three synanthropic experiences in which one can participate: “The Blue Pigeon” in Washington Square Park, which explores pigeons; “The Washing Bear” in Central Park, which involves raccoons; and “The First to Cross” in Tompkins Square Park, which focuses on rats.

Now, Nissim’s work is expanding to include an audio tour that considers the history and present-day status of the jackal population in Tel Aviv‘sYarkon Park.

Set to launch in 2021, the “Golden Howl” experience will provide participants with an in-depth look at the simultaneous evolution of the park from the mid-20th century alongside the state of the jackal population during that time.

The project is hoped to yield a greater understanding among city folk concerning the creatures, and perhaps diminish negative perceptions and preconceived notions toward urban animal life.

From the Greek term, synanthropos (“together with man”), synanthrope refers to a member of an animal species that lives in proximity to human beings and benefits from the artificial habitats people assemble around themselves.

The number of instances of animals taking shelter within the city landscape is only increasing. This phenomenon has been occurring for so long that some animals have become utterly dependent on cities to thrive, suggesting that urban areas can function as ecosystems.

However, synanthropic animals like rats, raccoons and pigeons are usually perceived as negative and are frequently targeted for extermination. But as Nissim describes it, lethal methods of controlling species that are considered pests tend to create a chain reaction that inadvertently affects other animals that are not seen as pests.

“At the beginning, New York City started using poison to kill rats, but then the urban hawks started dying from eating the poisoned rats,” she says.

While the city learned from its mistake and began employing a more contained method, Nissim sought a more harmonious alternative.

Having an eye for the permeating elements of nature that are often overlooked, Nissim collaborated with colleagues from NYU’s Telecommunications program to create the Synanthrope Preserve Project with the intention of raising questions and awareness regarding common city animals.

The audio tours are meant to identify the disconnect between human beings and animals and showcase how human consumption behaviors perpetuate the problem. She hopes to shift people’s perspectives toward coexistence with the critters.

Each of the three self-guided audio tours operating in New York City is about 30 minutes long and can be accessed through a computer or smartphone app. All three describe the life histories of the particular animal and how it has adapted to urban niches. Each is a bit different

“The First to Cross” experience that explores rats in Tompkins Square Park is a “choose-your-own-adventure style” tour where you can learn something different depending on which direction you take.

“The idea was to create a conversation– having people coming in a group and then splitting up. At the end, I saw that people were talking and sharing which parts they heard with each other and discussing what they had learned,” says Nissim.

While rats in New York City are associated with feelings of disgust, jackals indigenous to Israel and the surrounding region cause mild fear because they are more often heard than seen.

The “Golden Howl” experience will allow residents of Tel Aviv to better understand jackals, why their presence and our shared coexistence is important, and what can be done to share the habitat safely and equitably.

Reactions to the Synanthrope audio tours have been overwhelmingly positive thus far. Some people have even compared the experience to a safari.

“For me, it was very astonishing to see how many people in New York were excited to see rats, which is usually not the case,” explains Nissim.

Possibilities for future Synanthrope Preserve Project experiences may include bats, crows and seagulls.

“The fun thing about it is that it is infinite. I see more and more animals that are being pushed into the urban space that are actually becoming more successful than their rural counterparts like peregrine falcons,” Nissimconcludes.