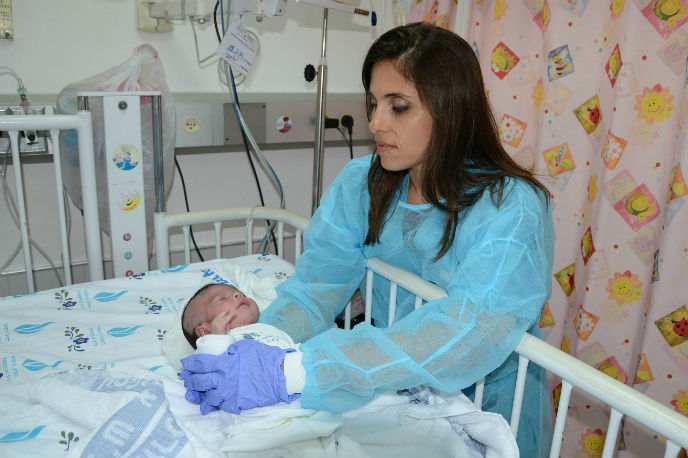 Along with the other 210,000 residents of coastal Ashdod, over the past couple of weeks Irena Nosel and her family must scramble for shelter when the wailing siren warns of incoming missiles from Gaza.

Her teenage son is in the army and her five-year-old son is confined to home because of the danger. Yet Nosel hasn’t missed a day of work as head nurse of the pediatric intensive care unit at Wolfson Medical Center in Holon.

She cares daily for critically ill children from Israel as well as from Gaza, the Palestinian Authority-administered territories, Syria, Africa and other places where the medical system is much less advanced than in Israel.

“Children are children. They are not our enemies,” she tells ISRAEL21c. “It doesn’t matter where they are from. If these children will not come to Wolfson and receive treatment, they will have no chance to live.”

Nosel is also head nurse for the Israeli nonprofit medical organization Save A Child’s Heart, based at Wolfson since its founding nearly 20 years ago. About 40 percent of the patients in her 10-bed unit are admitted through the free cardiology clinic that SACH holds every Tuesday for patients from Gaza and the West Bank.

Remarkably, the flow of sick children has not lessened despite the bombings, due to ongoing behind-the-scenes coordination with healthcare officials in hostile regions.

“We always have Palestinian children in our unit; right now we have three,” she says during a phone interview on Sunday morning. “This Tuesday, 14 children are scheduled to come to the clinic, and some will be hospitalized and stay for surgeries.”

The morning of her conversation with ISRAEL21c, Nosel was feeling less stressed about leaving her young son, Tomer, because Wolfson had just opened an emergency day camp for children of employees. Until then, she had to leave the kindergartner at home with his dad, waiting anxiously for her return, since regular summer activities are canceled in the port city due to constant attacks.

“It’s a difficult situation at home,” she acknowledges. “There are a lot of bombs falling. I never thought to stay home with him and miss work, but honestly it’s not easy for me. We are all here because we believe that we should continue with our mission, saving the children and helping the families.”

No politics in the hospital

Tamar Shapira, spokeswoman for SACH, calls Nosel “the most amazing, dedicated person. She comes every day no matter what, because she does a simple calculation that she knows she’s needed for these children’s survival. The whole team feels that way.”

The pediatric ICU is staffed by 35 nurses in addition to medical students, medical interns and four senior doctors – Jewish, Muslim and Christian. Healthcare professionals from many countries, including recently from China and Tanzania, come for SACH training to take back home. About half the children admitted through SACH for free treatment come from the Palestinian Authority, Jordan, Iraq and Morocco.

Shapira says that the personal political leanings of the staff run the full spectrum from right to left, but have no bearing on their work. “They are all here for the patients,” she says.

“There is no politics here,” echoes Nosel. “The nationality of the children is not an issue at all.” The patient shown here is Talya from Nablus. Photo by Barak Nuna

She relates that many Palestinian parents feel frightened when they first come to Israel with their sick children. “And then they see how we care for their kids, and they see that there is no tension between the different peoples here.”

When an air-raid siren goes off in Holon, just south of Tel Aviv, the staff members, parents and children are all in the same boat. In the face of the awkward irony that the bombs are coming from Hamas terrorists in Gaza, where some of the patients’ families live, Nosel reports that the stress in the pediatric ICU is kept to a minimum with black humor.

“We prefer to laugh about it,” she says.

After some 20 years on the job, the 42-year-old nurse says she is not burned out even in such trying times. During the 2009 Gaza conflict, she was pregnant with Tomer and didn’t miss a day on the job. Again in 2012, and now less than two years later, she has had to work under fire.

“I’m still excited for my work, and I have not thought about doing something else,” she says. “I like to care for people.”

UNCOVER ISRAEL - Get the ISRAEL21c
Weekly Edition free by email
Sign Up Now!
Bring Israel's story to life.
Millions of people around the world rely on us to gain a deeper understanding of Israel. We are the trusted source for original content you won't find anywhere else.
You can make a difference. Donate today to support journalism that brings Israel’s story alive.
SUPPORT ISRAEL21c
Read more on:   Wolfson Medical Center, Coexistence, Social Action, Save a child's Heart, Gaza conflict