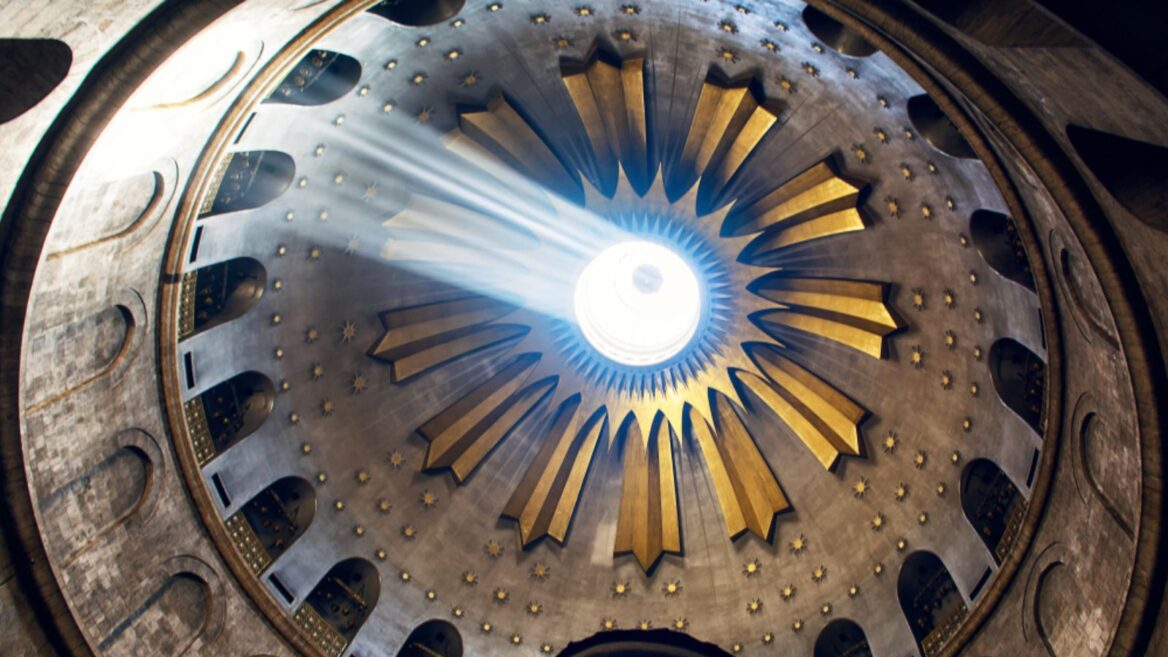 The ceiling of the Church of the Holy Sepulchre in Jerusalem. Photo by Axtem/Shutterstock.com

These coronavirus times are hard on the soul. That’s why over here at ISRAEL21c we thought to give us all a little break from the anxiety and fear as well as a gentle reminder that beauty, inspiration and comfort can be found by looking around – or in this case up — at Israel’s most magnificent ceilings.

The stunning architecture, mosaics and art on these unique ceilings all show the amazing achievements of humanity over the centuries.

Grab your mouse, zoom in and enjoy. 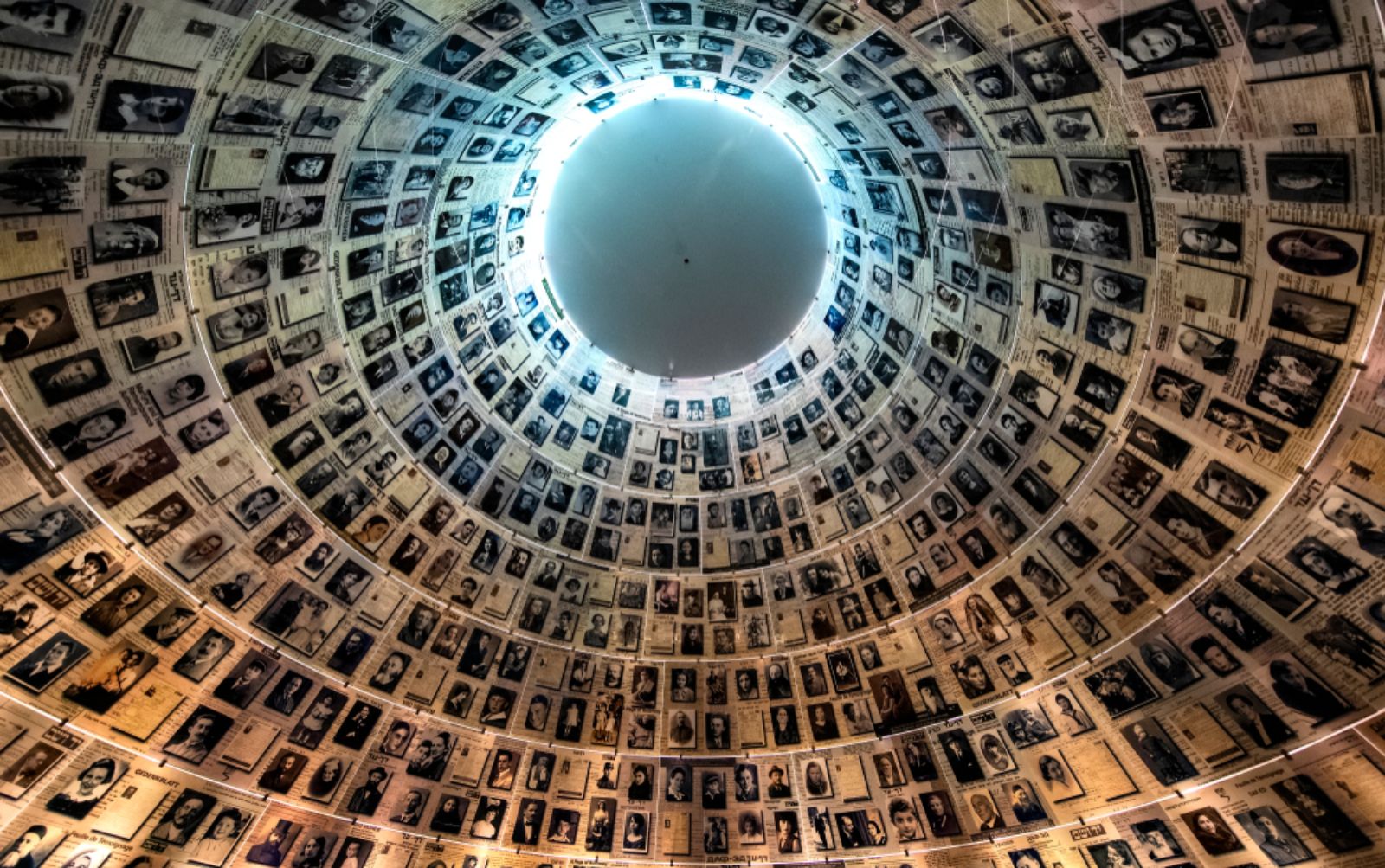 The Hall of Names at the Yad Vashem World Holocaust Remembrance Center in Jerusalem. Photo by Paparazzza/Shutterstock.com

Perhaps not the most obvious choice as balm for the soul, the Hall of Names at the Yad Vashem World Holocaust Remembrance Center in Jerusalem has one of the most striking ceilings in the country.

A 10-meter cone holding 600 photographs and fragments of Holocaust victims’ testimonial pages that are reflected in a water pool down below, the ceiling is a mesmerizing reminder of the horrors that the Jewish people went through, but also of their incredible revival and resurrection.

As we worry over every sneeze, cough and headache around us, this beautiful monument is a gentle reminder that we’ve been through much worse and hope must never be lost. 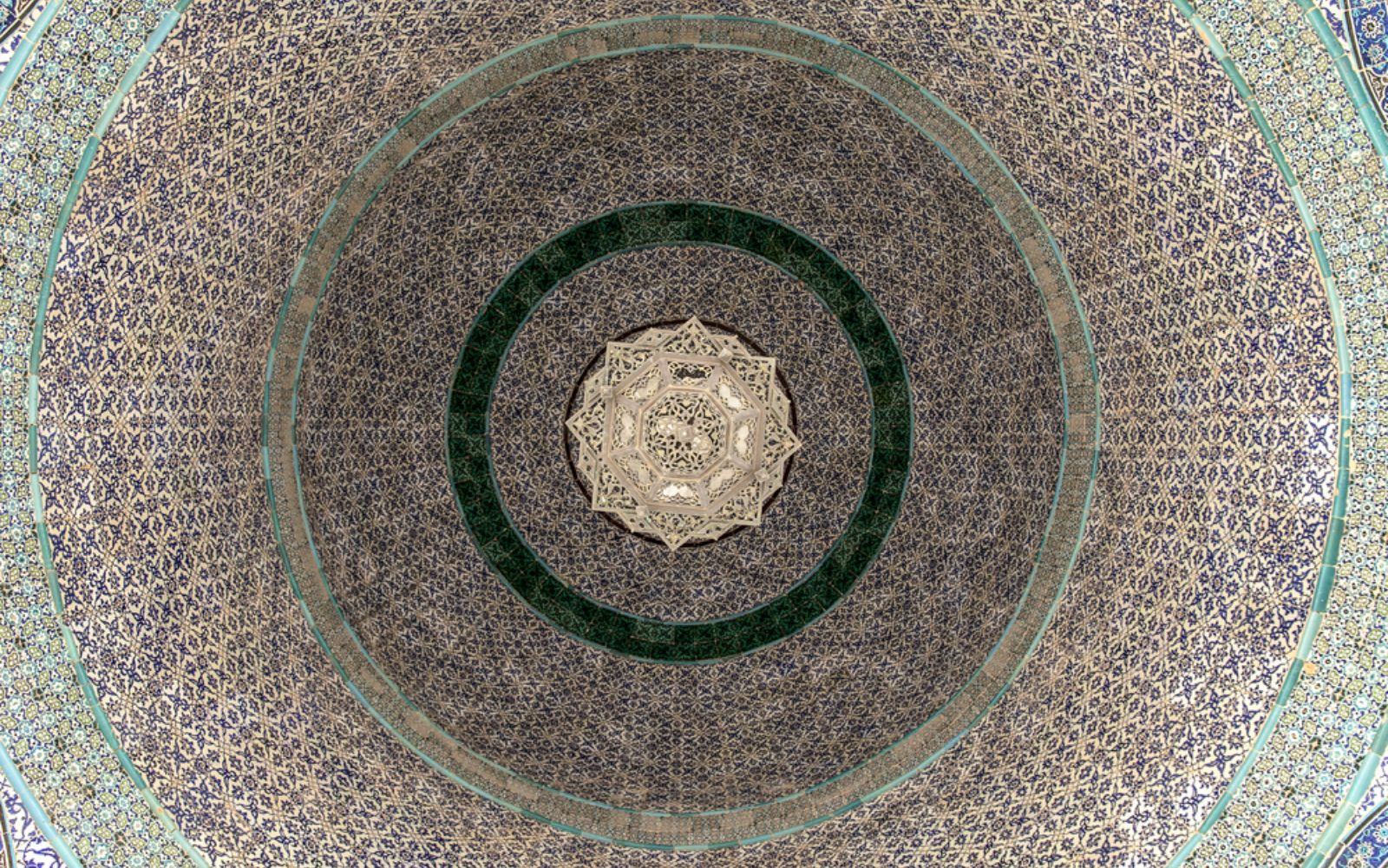 A geometric pattern on the tiled ceiling of the Dome of the Chain on the Temple Mount in the Old City of Jerusalem. Photo by Matt Ragen/Shutterstock.com

Located right next to the far more famous Dome of the Rock, the little Dome of the Chain on Jerusalem’s Temple Mount deserves almost equal attention. The small standalone dome was built in the seventh century CE by the Caliph Abd Al-Malik and serves as a Muslim prayer house rather than as a shrine or mosque.

Like Judaism, Islam forbids the depiction of animate beings, meaning that much Islamic art centers around geometrical or floral designs. This is the case at the Dome of the Chain, where the quiet color palette seems to accentuate the intricate design.

Until the corona crisis blows over and you can check it out for yourself, we recommend taking a nice, long look here. 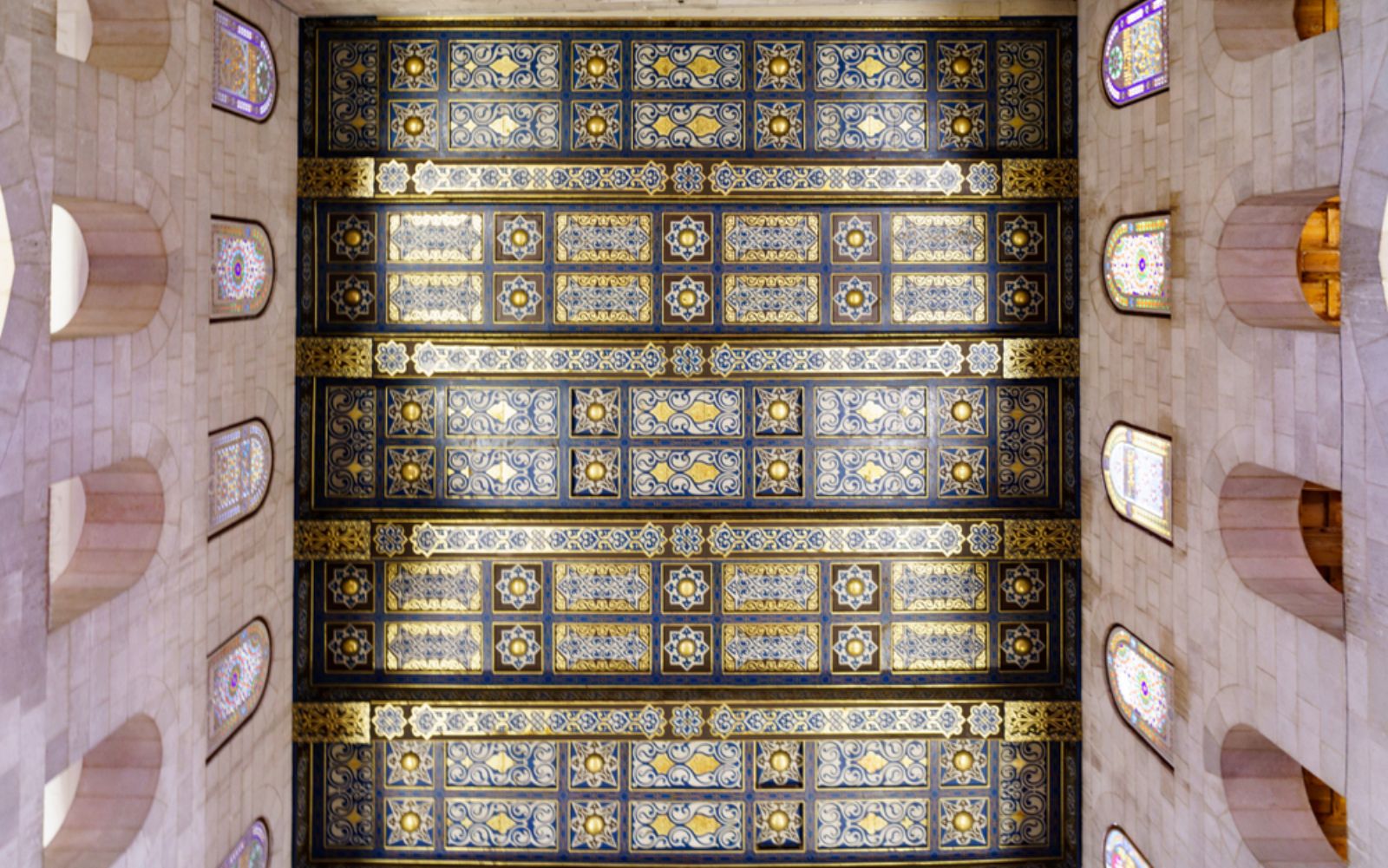 The ceiling of Al-Aqsa Mosque on the Temple Mount in Jerusalem. Photo by Catay/Shutterstock.com

On the southern edge of the Temple Mount compound in Jerusalem’s Old City, Al-Aqsa Mosque is the third holiest site in Islam. It is believed that this is the site from which the Prophet Muhammad ascended to heaven on his Night Journey.

The ceiling of the mosque is as fancy as it gets, and here too the ban on animate figures is exemplified, as huge, multicolored patterns decorate its length, inviting worshippers and visitors to gaze endlessly into it and enter a meditative state. 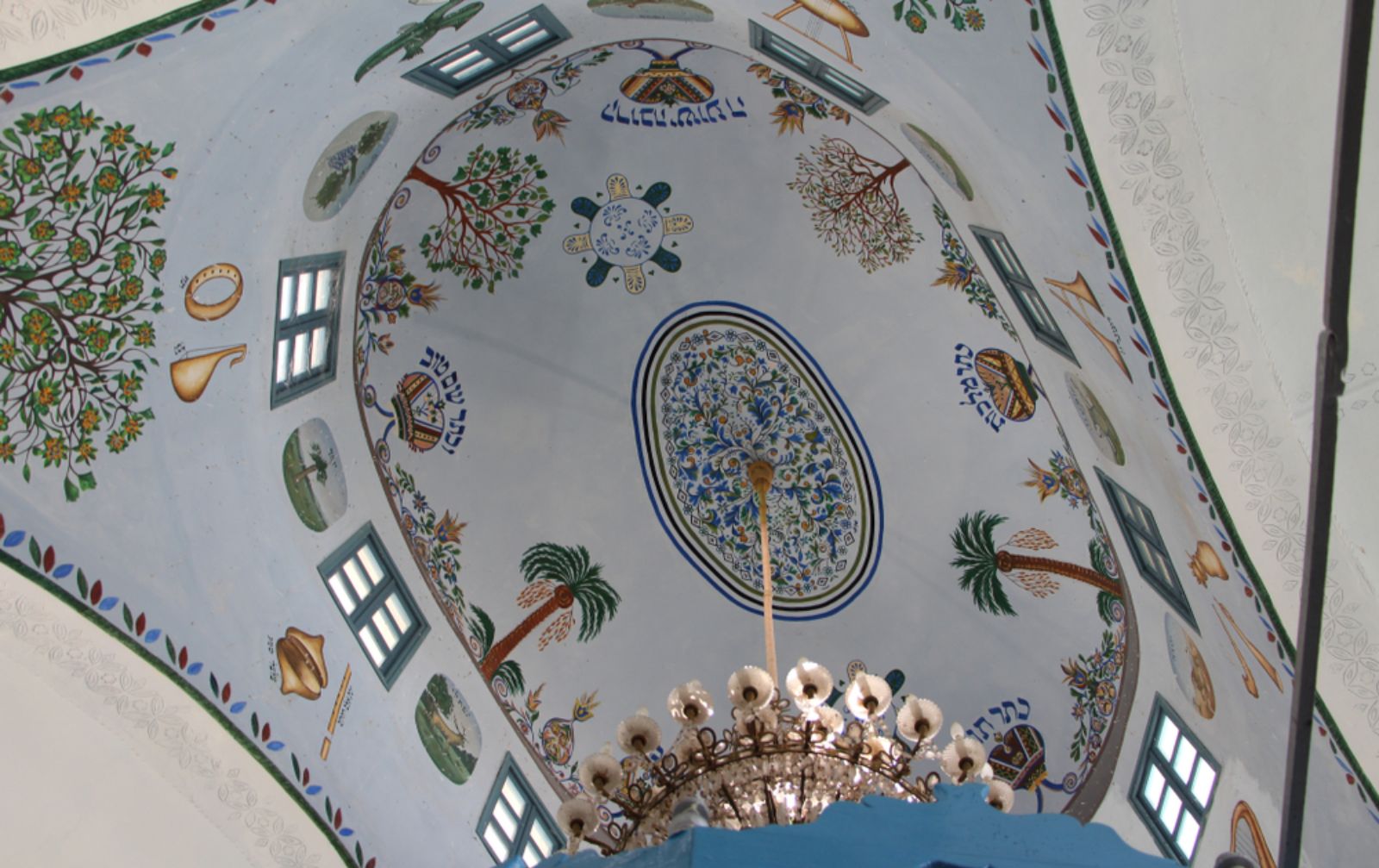 An ornate painted ceiling in the Abuhav Synagogue in the ancient city of Safed. Photo by Chayim Ehrenfeld/Shutterstock.com

Another example of a stunning, non-animate ceiling can be found at the Abuhav Synagogue in Safed. Dating back to the 16th century, the synagogue is named after a prominent kabbalist rabbi from Spain and houses important and ancient Torah scrolls.

The ceiling of this blue-hued synagogue is a true work of art. It depicts the 12 Tribes of Israel, musical instruments that were used in the ancient Jewish Temple, different crowns and trees, as well as the Dome of the Rock, where the Temple once stood. 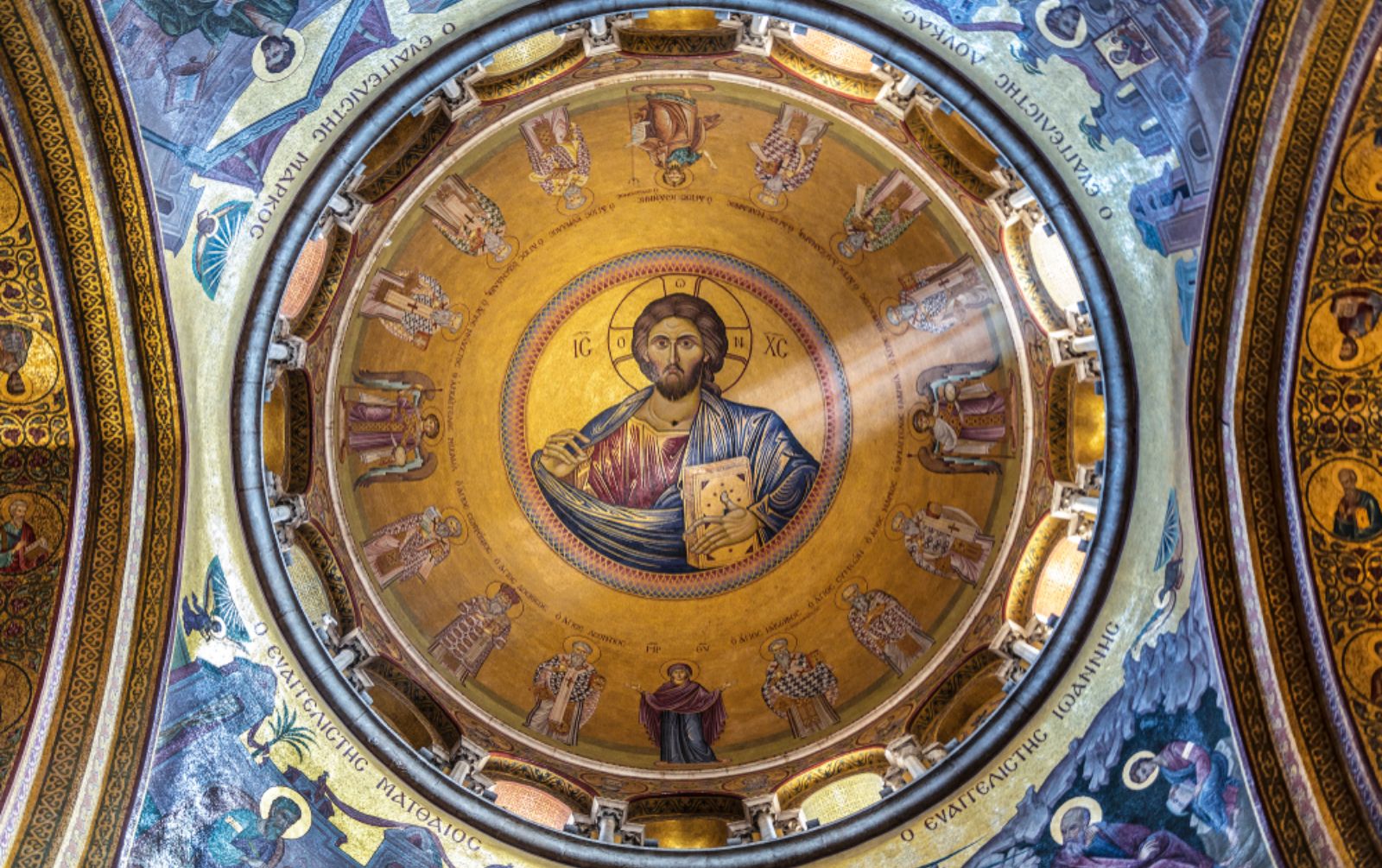 The Christ Pantocrator mosaic at the Church of the Holy Sepulchre in Jerusalem. Photo by Natalia Volkova Shutterstock.com

No discussion of magnificent ceilings in Israel can be had without mentioning the beautiful works of art in the many churches across the country. One prime example is the Church of the Holy Sepulchre in Jerusalem, where according to Christian tradition Jesus was buried and resurrected.

This church is filled to the brim with interesting architecture and art.It can be difficult to let the eye gaze upward, but it’s most worthwhile to see one of the striking elements in the church: a golden mosaic portrayal of Christ Pantocrator (Jesus Almighty).

Now standing empty because of coronavirus, the church is usually abuzz with pilgrims, worshippers and visitors. We can only hope to be squashed in line there as soon as possible. 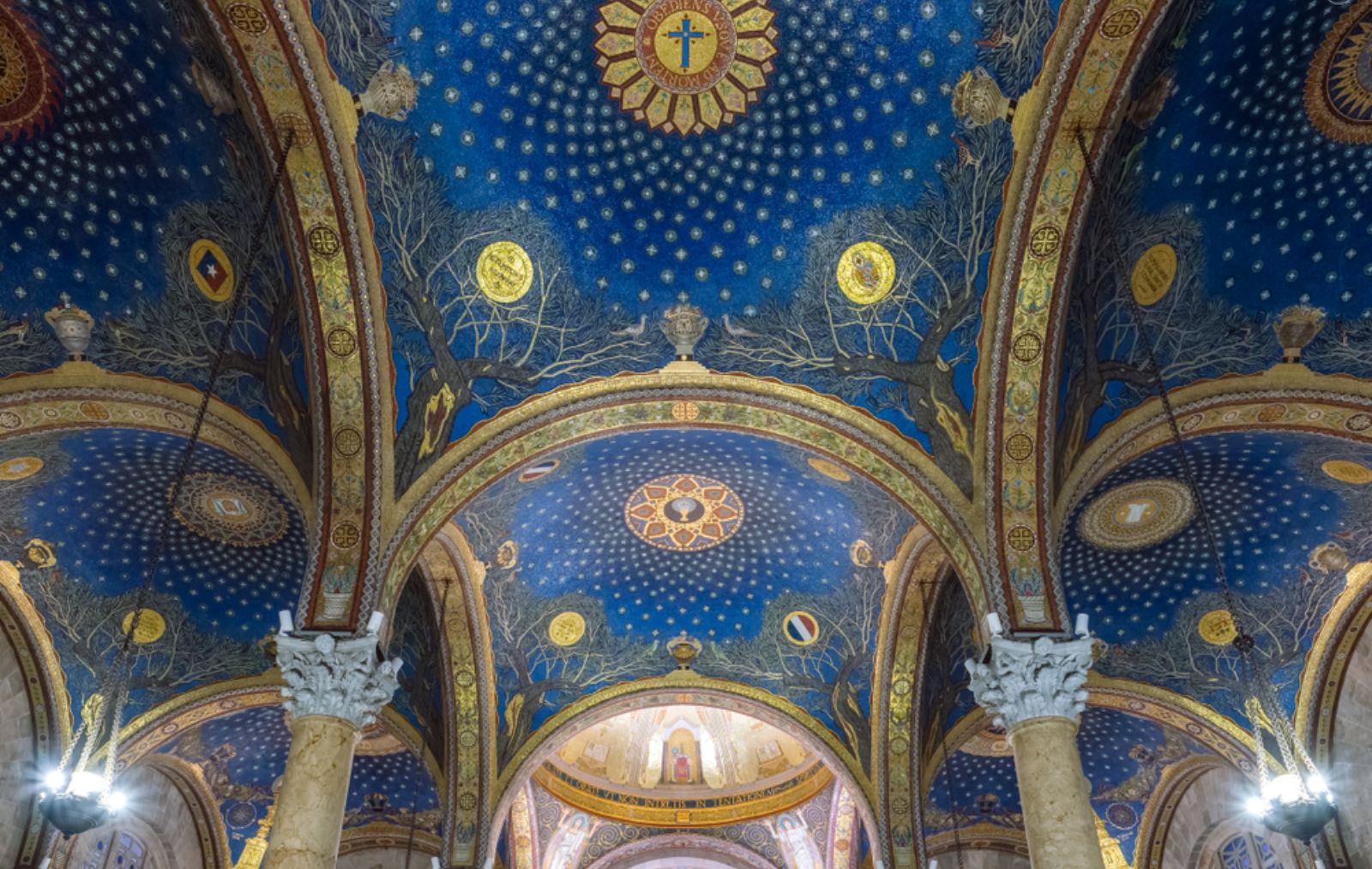 Interior view of the Church of All Nations or the Basilica of the Agony on the Mount of Olives, next to the Gardens of Gethsemane in Jerusalem. Photo by Mazur Travel/Shutterstock.com

A beautiful ceiling with a beautiful story can be found at the Church of All Nations. Located on the Mount of Olives, the present-day church is situated atop earlier Byzantine and Crusader houses of worship that mark the site where according to Christian tradition Jesus prayed before his arrest.

Work on the modern church began in 1919 with funds donated by countries worldwide – thus giving the church its name – and whose generosity is noted in a mosaic adorning the building. The dark blue, star-studded ceiling depicts the night, and is surrounded by images of the olive trees outside the building, merging it with its natural surroundings. Stunning. 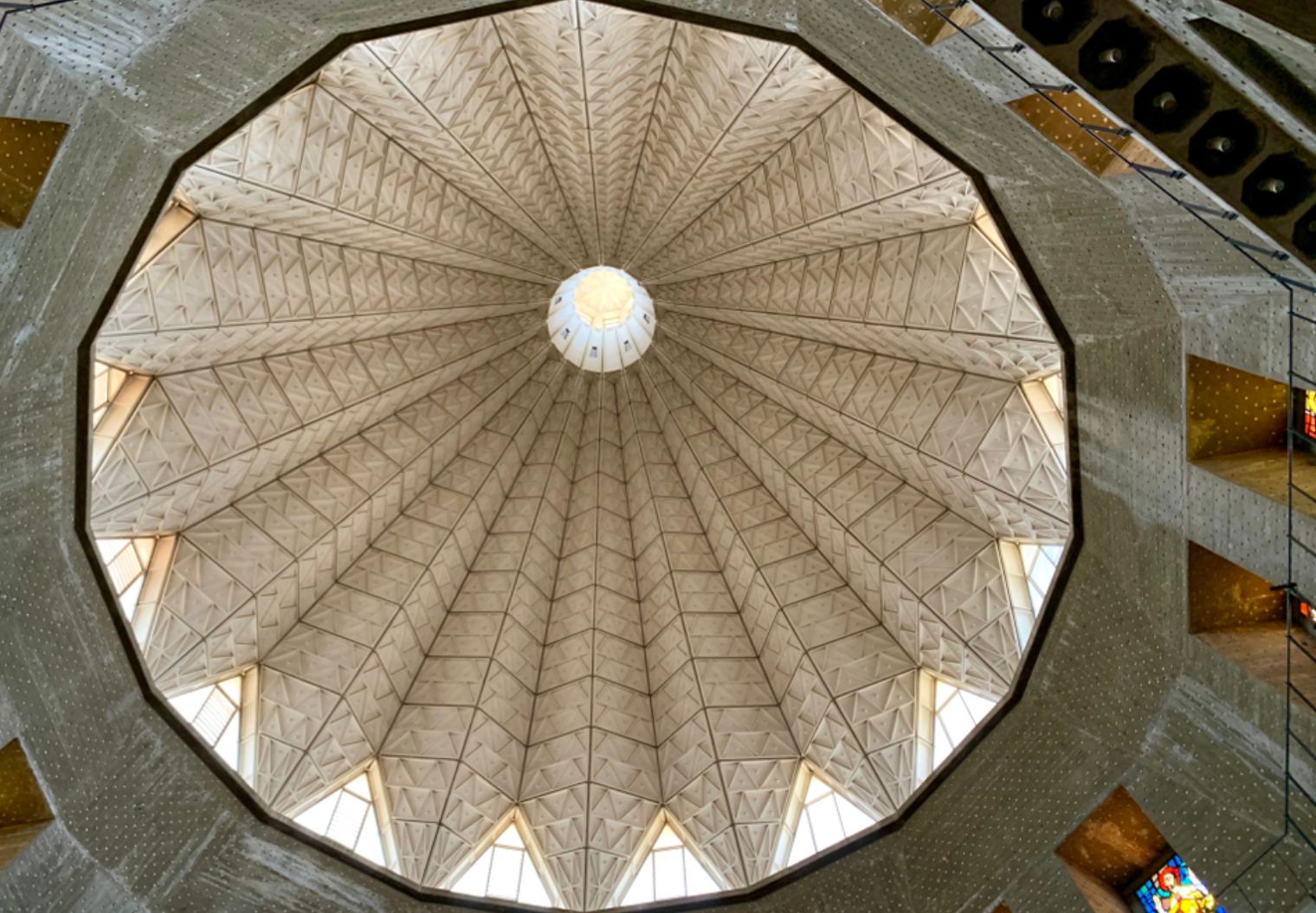 The ceiling of the Church of Annunciation in the northern city of Nazareth. Photo by Alisa_Ch/Shutterstock.com

The Church of Annunciation stands out for its very modern design, and for good reason – the present-day building in the northern city of Nazareth was constructed only in 1969 by Israeli construction company Solel Boneh (and Italian architect Giovanni Muzio).

The church’s dome is made of reinforced concrete and is comprised of 16 edges to resemble a lily to represent the Virgin Mary. Her house is believed to have existed onsite and that’s where she is said to have learned that she would conceive Jesus.

Nowadays, the church serves as a focal point for the city. We highly recommend popping in when you’re next there – not only for the striking ceiling but for the beautiful and peaceful complex in its entirety. 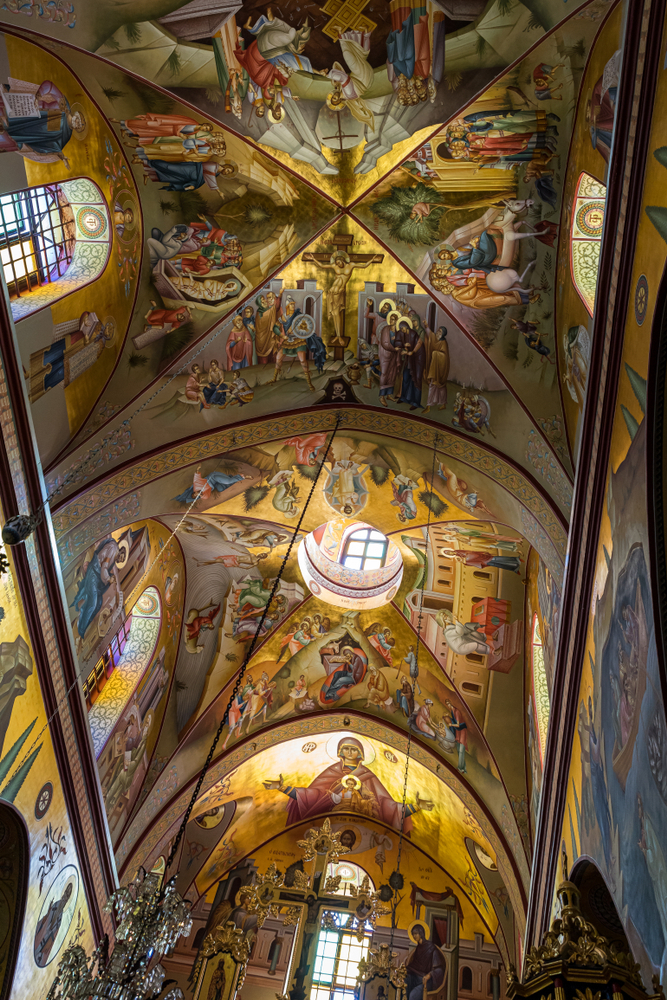 Ceiling painted with scripture scenes in the Greek Orthodox Monastery of the Transfiguration located on Mount Tabor near Nazareth. Photo by Dmitriy Feldman Svarshik/Shutterstock.com)

Located alongside a much more famous Franciscan monastery complex atop Mount Tabor in northeast Israel, the 19th century Greek Orthodox Monastery of the Transfiguration is nevertheless stunning.

Its colorful, 3D-looking ceiling is rich in detail, showcasing different scenes from the Christian Scriptures painted in traditional Orthodox style. The high windows located to its sides bathe the whole space in soft light, adding to the monastery’s serene calm. 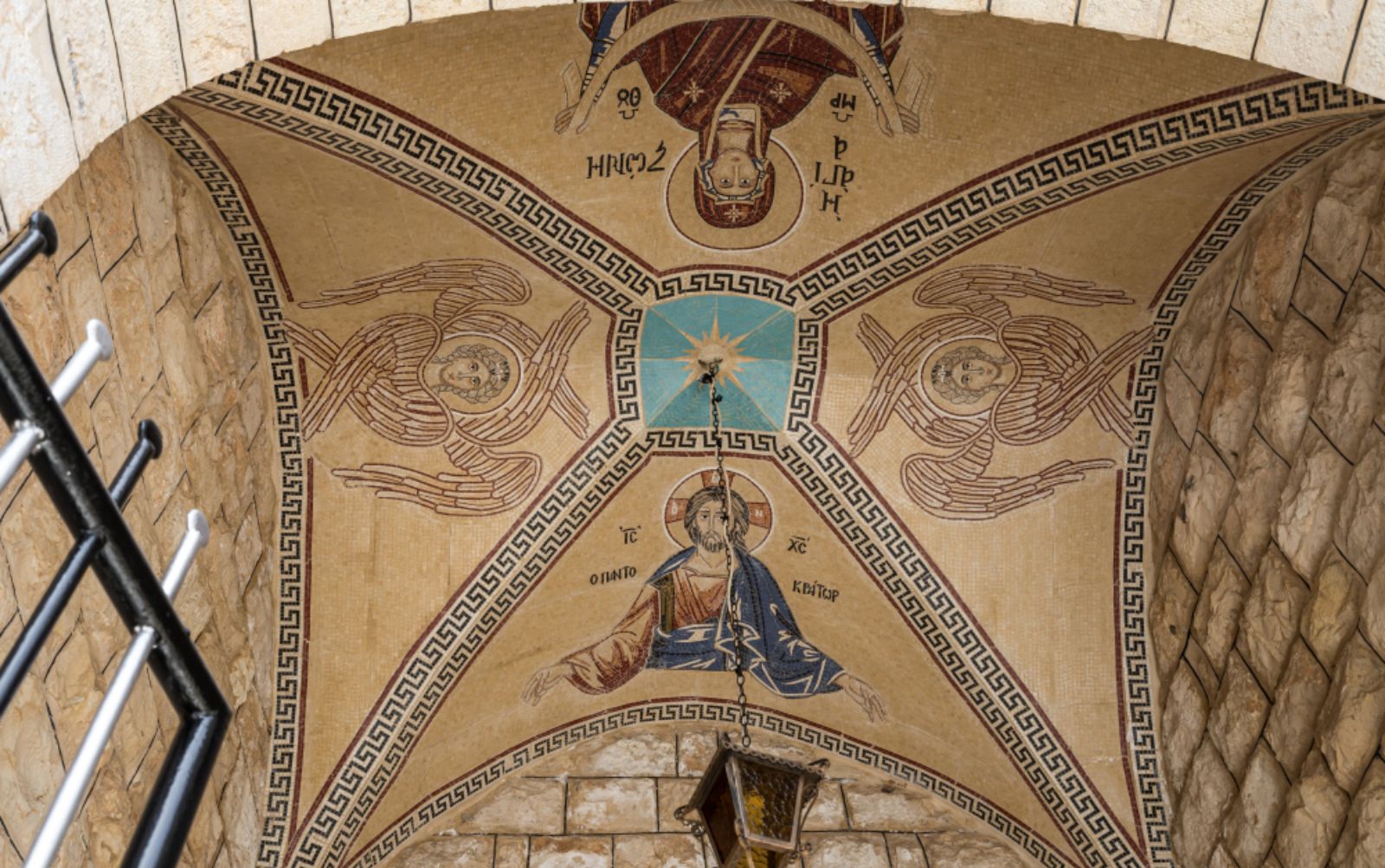 Mosaic ceiling at the entrance through the gateway to the Greek Orthodox Monastery of the Transfiguration located on Mount Tabor near Nazareth. Photo by Dmitriy Feldman svarshik/Shutterstock.com

Still at the Monastery of the Transfiguration atop Mount Tabor, the mosaic ceiling at its entrance is much more modest. Set in stone, it echoes the ceiling of the main hall, giving visitors a hint of what’s to come and serving as a reminder that no ceiling is too small when it comes to artistic beauty. 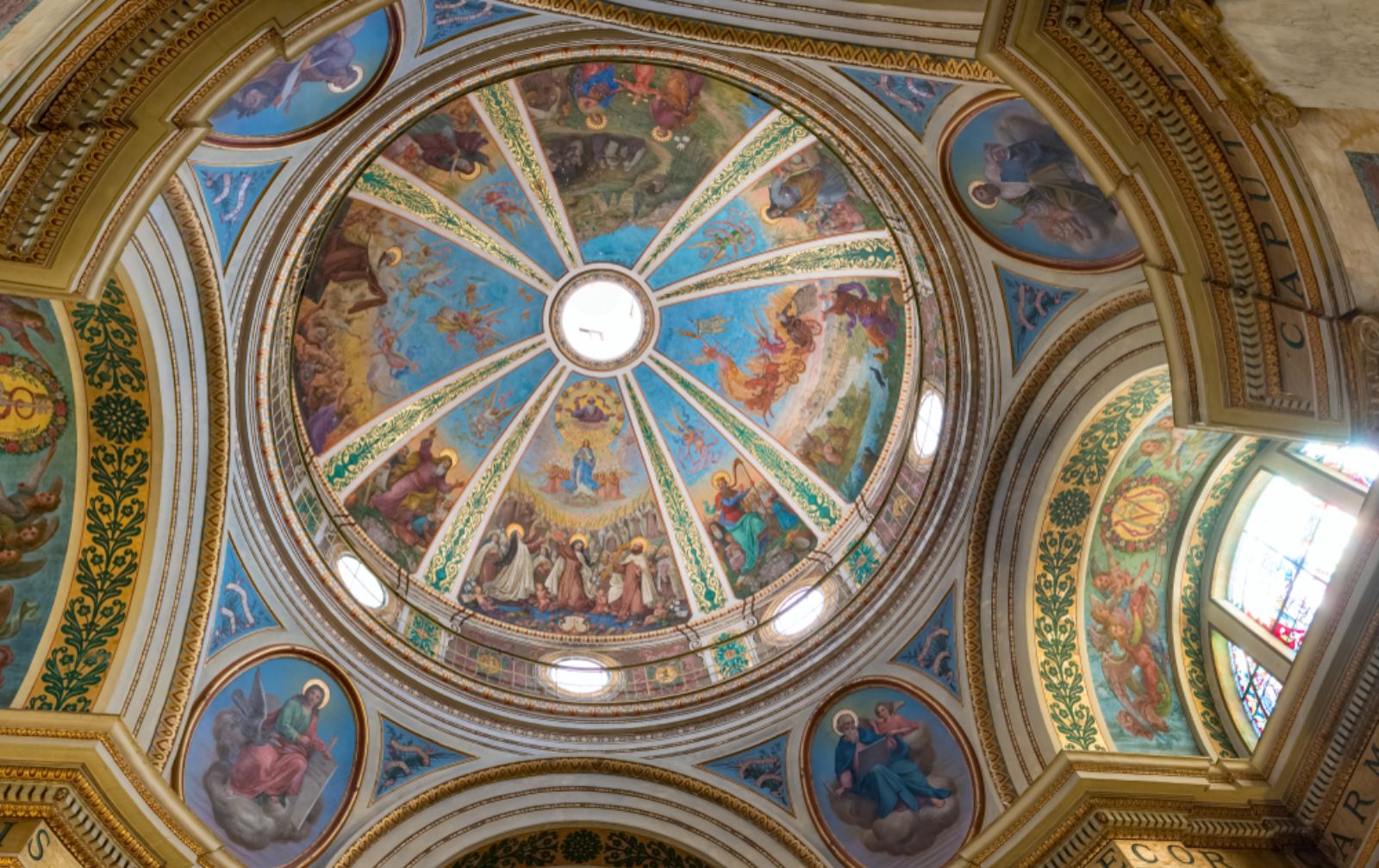 The domed interior of the Stella Maris Monastery in Haifa. Photo by Mazur Travel/Shutterstock.com

Moving on to the northwestern city of Haifa, the Stella Maris Monastery boasts not only one of the best sea views in the country but also one of its prettiest ceilings.

The pastel-colored domed ceiling of the main church in the complex depicts scenes and figures from both Christian and Jewish Scriptures, such as King David, the Prophet Elijah, the Holy Family and the Four Evangelists.

It’s no coincidence that Elijah makes an appearance here, as the church sits atop a cave associated with the prophet that can be reached by walking down a few steps. You know, if you’re sick of looking up. 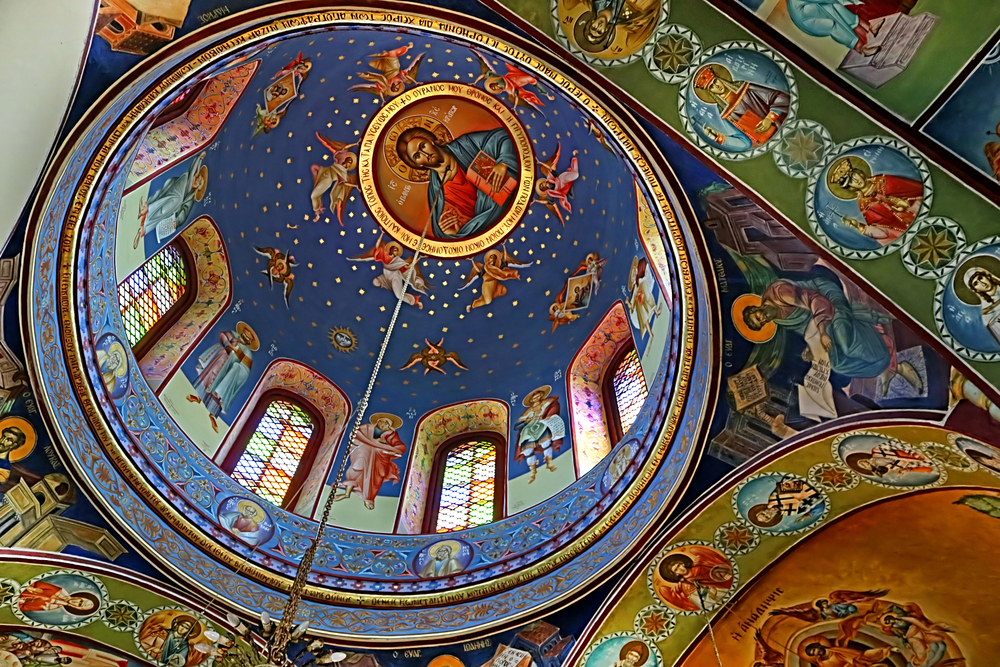 The colorful ceiling of the Greek Orthodox Church of St. George in the northern Israeli village of KafrKanna. Photo by Gelia/Shutterstock.com

Still up north, the Arab-Israeli town of KafrKanna is home to several churches of different denominations, including the Greek Orthodox Church of St. George, which commemorates the site where Jesus turned water into wine.

The domed ceiling is bright and rich in detail, making the space below a wonderful place to soothe your soul. 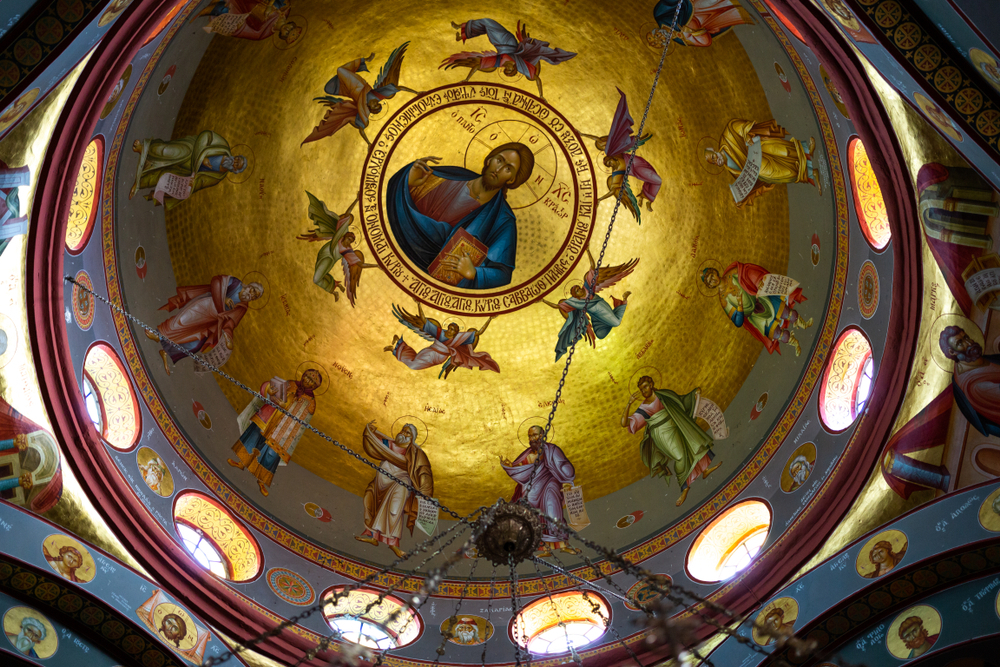 The dome of the Church of the Apostles at Capernaum on the shores of the Sea of Galilee. Photo by Logan Bush/Shutterstock.com

Situated on the shores of the Sea of Galilee (Lake Kinneret), the Greek Orthodox Church of the Apostles is a truly beautiful spot. It was built in 1931 on the edge of the ancient town of Capernaum where Jesus lived and worked and commemorates his apostles.

The complex boasts bright red domes and lovely grounds, as well as green, lush gardens. Inside, the ceilings are quite magnificent – resplendent in gold, they make a wonderful setting for contemplation and relaxation.