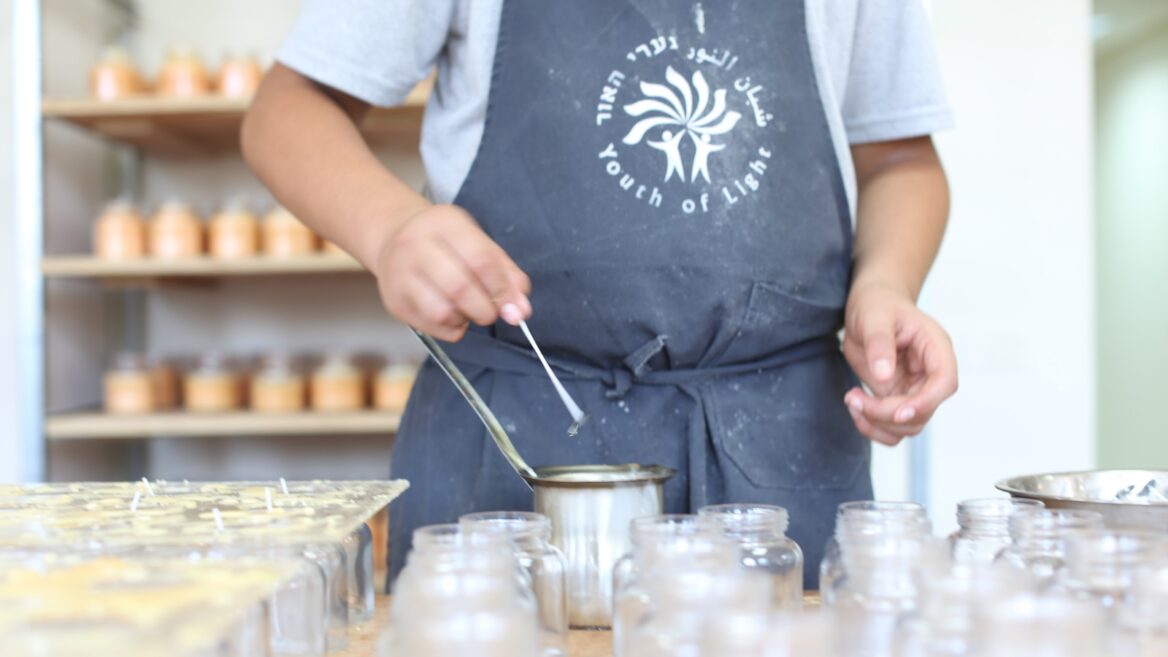 At-risk youth are employed by Youth of Light making candles for stores across Israel and the US. Photo: courtesy

Ran Oren was at a coffeeshop in Herzliya one Friday when his phone rang. It was Sagie, a 14-year-old Russian immigrant he’d mentored two years previously during his master’s degree course in psychology.

“Can you come pick me up? I’m on the street. I live on the beach,” Sagie told Oren.

Sagie’s life had spiraled downward since Oren had last seen him. Welfare authorities had removed him from his troubled home. He’d dropped out of school and was arrested several times for selling drugs.

“He just couldn’t find himself and finally ended up on the streets,” says Oren, a veteran of the IDF’s elite Duvdevan unit. 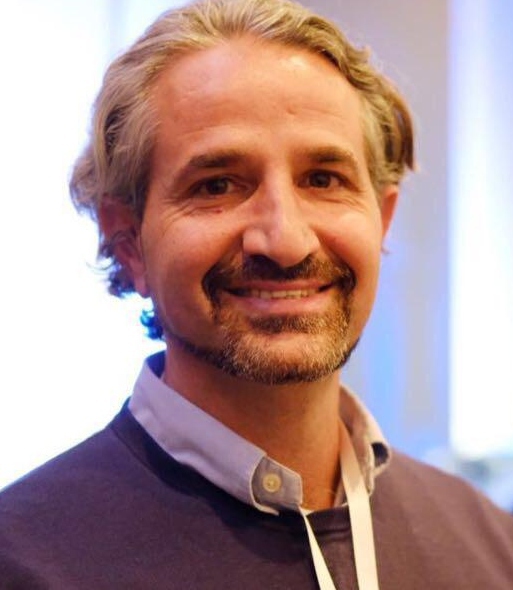 Oren took Sagie to his own apartment in Herzliya. He subsequently sheltered the boy with other relatives until finally helping Sagie reconcile with his mother.

“I arranged a summer job for him in our family business. I saw it was very good for him. He was earning money and had a structure,” Oren relates.

With the intervention of Oren and Herzliya’s mayor, Sagie eventually went back to school and succeeded despite many difficulties.

“But he was always showing me other kids in the street. That was very shocking,” Oren says.

“When Sagie was 17, I told him, ‘Let’s do something for these kids.’ I thought the best thing to do was get them off the street and give them work and then help them get back into an educational structure.”

One day, Oren asked the owner of a Herzliya Pituah restaurant what he did with the partially melted candles from the tables. He said that he threw them out.

“I came the next day with boxes and collected them. I thought it would be a great idea to recycle old wax and make new candles. To take something of no value and make something of value,” Oren tells ISRAEL21c.

Candles, he points out, symbolize light, warmth and special occasions.

This became the basis for Youth of Light, a social business that has so far employed 800 youth at risk.

Today, Youth of Light candles are sold online and under private label at 220 Sabon shops all over the world, and at Israeli chains Fox Home, Steimatzky and Bara Herbs. 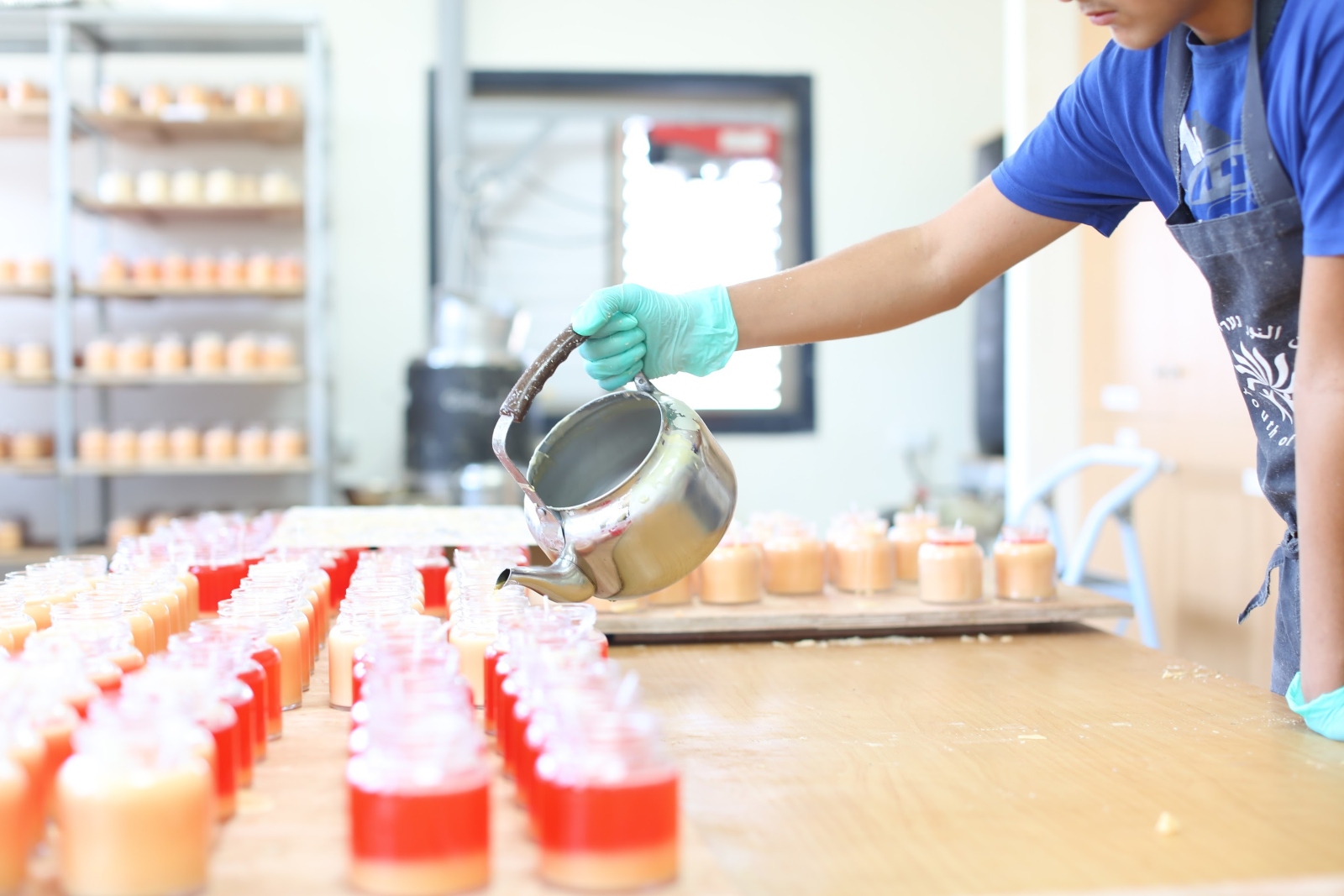 Youth of Light was launched in 2005 under the umbrella of the newly formed Patrizio Paoletti Association for Communication and Development in Israel.

Oren had traveled to meet Paoletti, a noted Italian educator, in 1999 during his university studies. “He had a large foundation in Italy sponsoring projects all over the world,” Oren relates.

Paoletti readily agreed to lend his expertise to Oren’s bootstrapped project, opening an independent branch of his foundation in Israel. 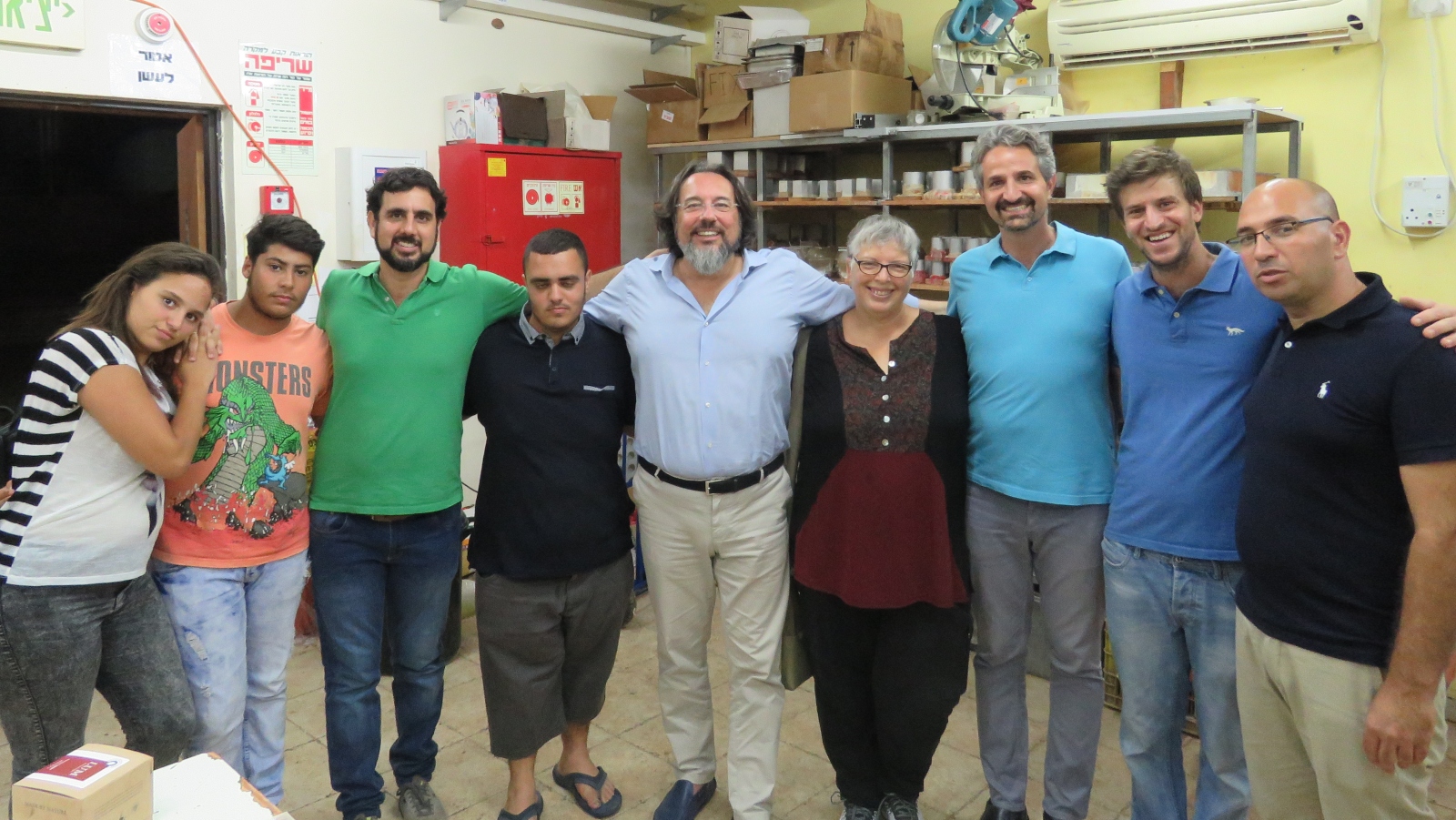 Patrizio Paoletti, center, with Youth of Light founder Ran Oren (third from right) and Youth of Light staff and participants in Ashkelon. Photo by Uri Rimon

Youth of Light’s first workshop was on the Jerusalem farm of Oren’s friend Motti Levi. Sagie was involved from the start, as was Asaf Percia, then a student of education.

“We got the donation of a car and we started to find lost kids and bring them,” says Oren. “We also offered them a place to sleep and meals on Motti’s farm. We started in a small caravan and as more kids came, we built our own place.”

Sabon, an Israeli-based global business, taught Youth of Light participants how to make a professional product. Soon they were producing 10,000 candles per month. 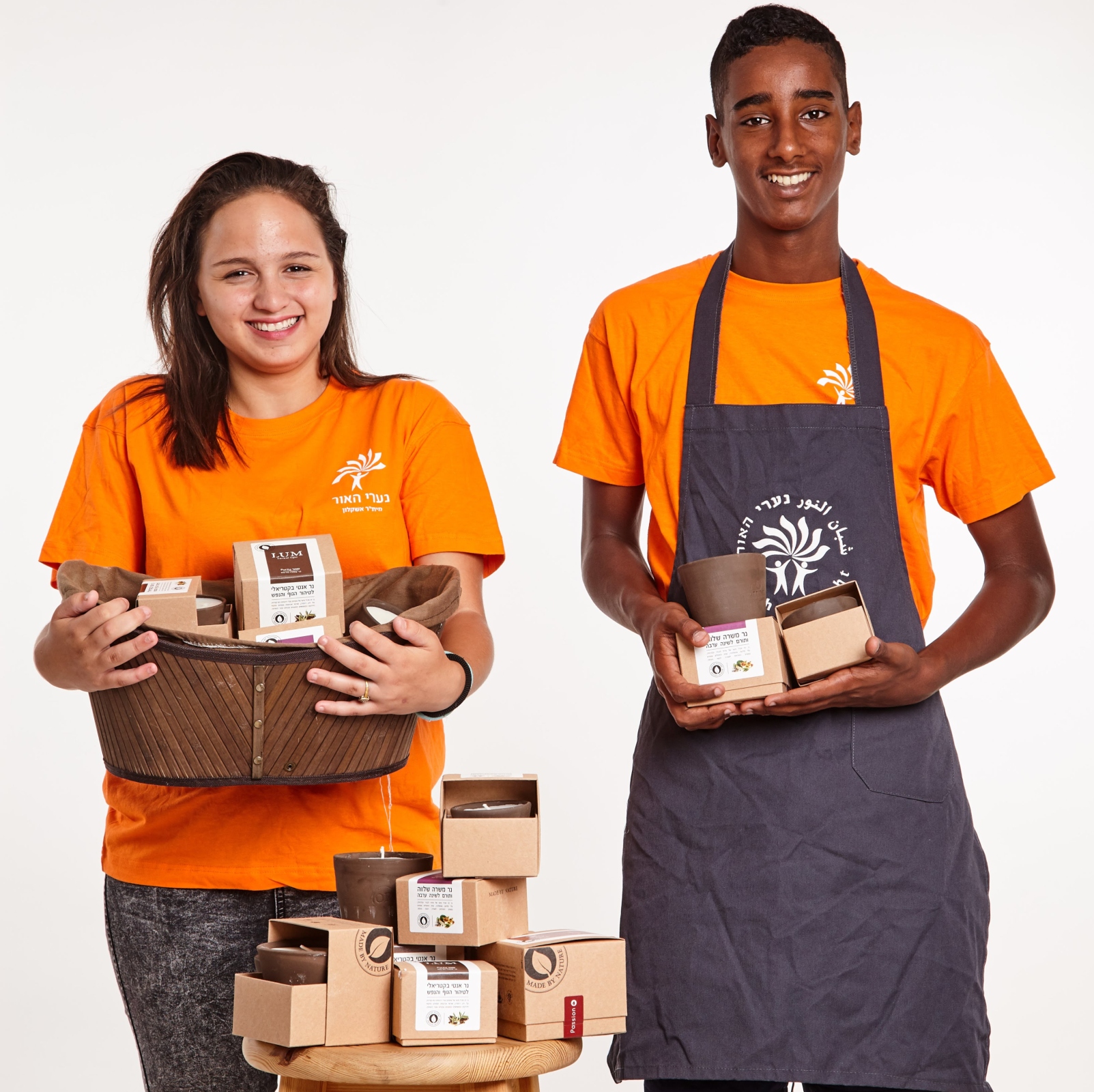 A study of 508 Youth of Light alumni found 80% had gone on to finish high school.

In 2012, in partnership with Israel’s Welfare Ministry, Youth of Light opened a project in Ashkelon for at-risk teens.

Based on its success, another site was started in 2017 in Arraba, a Galilean Arab village with high unemployment. A third site opened in 2018 on a farm in Rishpon, and another is opening in Holon. Each site accommodates 40 teens per year, working with one educator.

“Many cities are turning to us because it really works,” says Oren.

That is not just his opinion. In 2017, Bar-Ilan University researchers compared 508 “graduates” of Youth of Light to a control group of kids from similar backgrounds who weren’t involved in the project.

“They found that 82.3% of the kids in our project found work afterward and were working at least a year and a half after finishing Youth of Light, compared to only 20% in the control group,” says Oren.

Moreover, 80% of the Youth of Lights graduates had gone on to finish at least 12th grade compared with 56% in the control group. More than half went on to military or national service, while only 10% of the control group achieved that normative Israeli societal status.

“So now we could point to real results and show it works,” says Oren, now 45 and the fulltime manager of the association.

“A” came to Youth of Light at 16. Although medicated to control severe behavioral issues, he was too uncontrolled to get through a four-hour shift. But gradually, the soothing actions of candle-making calmed him.

He began coming on time and finishing his work. He even weaned himself off his medication. Within four months, “A” became one of the three top workers and helped newcomers to integrate.

“N,” 15, had been in trouble with the law when she came to Youth of Light. She was silent and sullen, wearing a large cap that obscured her face. Gradually, she learned to trust the staff and peers and began working diligently.

“N” discovered a special flair for developing new types of candles and techniques. The hat came off and she stopped hiding from the world. She used some of the money she earned to buy a backpack for a needy classmate. Today she is an aircraft technician in the Air Force. 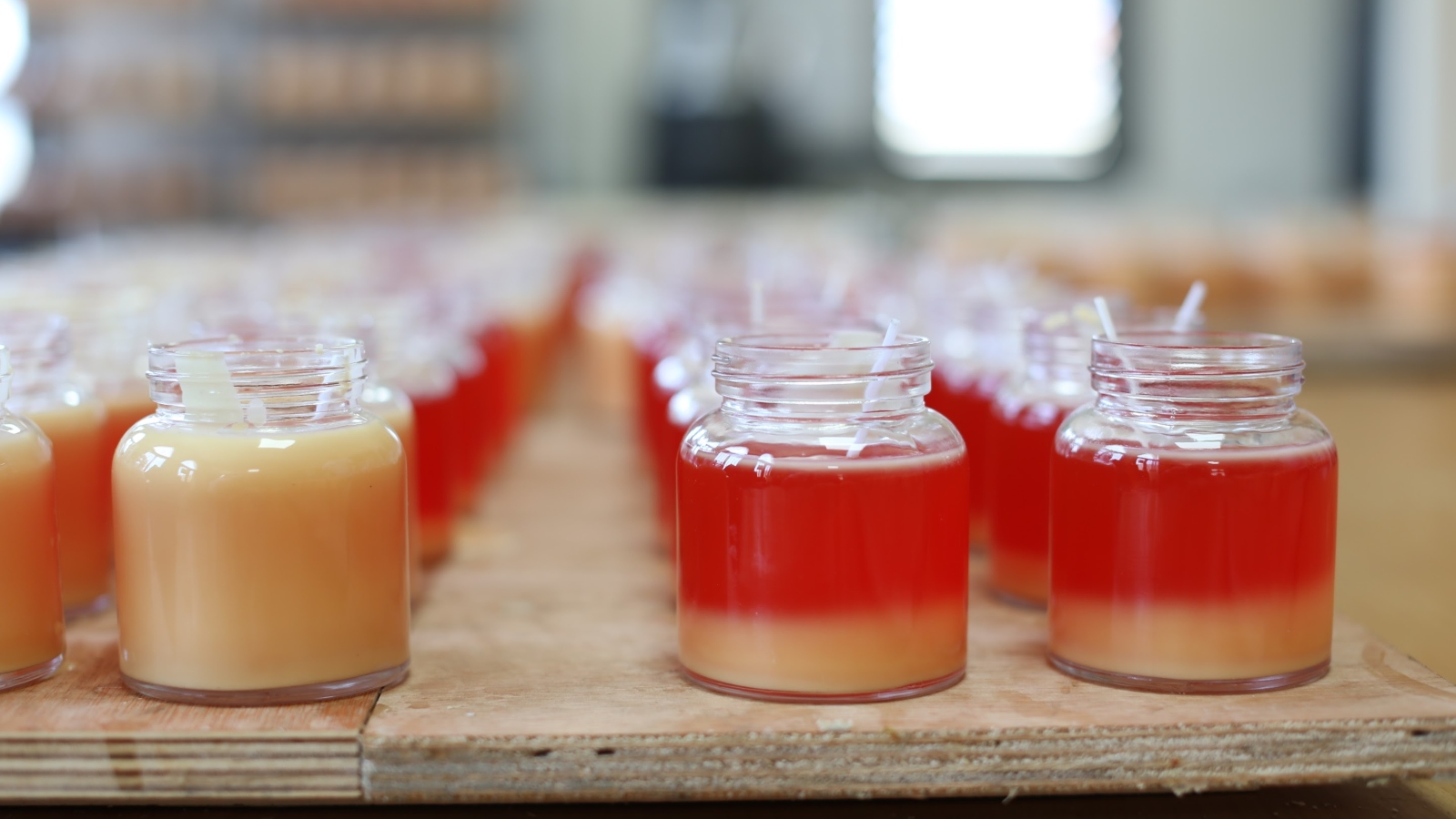 Candles being made in a Youth of Light workshop. Photo: courtesy

“R” started his first day at Youth of Light on the wrong foot by stealing from the counselor. Aggressive and uncooperative, he needed lots of personal attention.

One day, “R” and another boy were sent to a local health clinic to set up a booth and sell candles. To his surprise, “R” discovered that he is a natural salesman. This newfound talent gave him confidence and positivity. He went on to graduate high school with honors and dreams of opening his own business after the army.

“Using Paoletti’s Pedagogy for the Third Millennium method, we’ve found a special balance between the work and the social support,” says Oren. PTM is used worldwide in educational and training programs to support a process of self-education for life.

“These kids have to learn to show up for work on time, dress properly, engage in teamwork and meet goals. Slowly they learn to manage a shift or take other responsibilities,” says Oren.

“The change influences every part of their life and the money they earn makes a huge difference for their families. Last year we paid a quarter of a million shekels in salaries to Youth of Light kids.”

Youth of Light now produces about 300,000 candles every year. Some are made from 100% recycled wax, including insect-repelling citronella candles. Most contain 20% recycled wax.

Inspired by a workshop at Havaat Derech HaTavlinim (The Spice Path Farm) in the Galilee, Youth of Light began raising herbs in its Rishpon farm for a line of herbal candles made of organic coconut wax and sold in ceramic pots made in the Galilee. 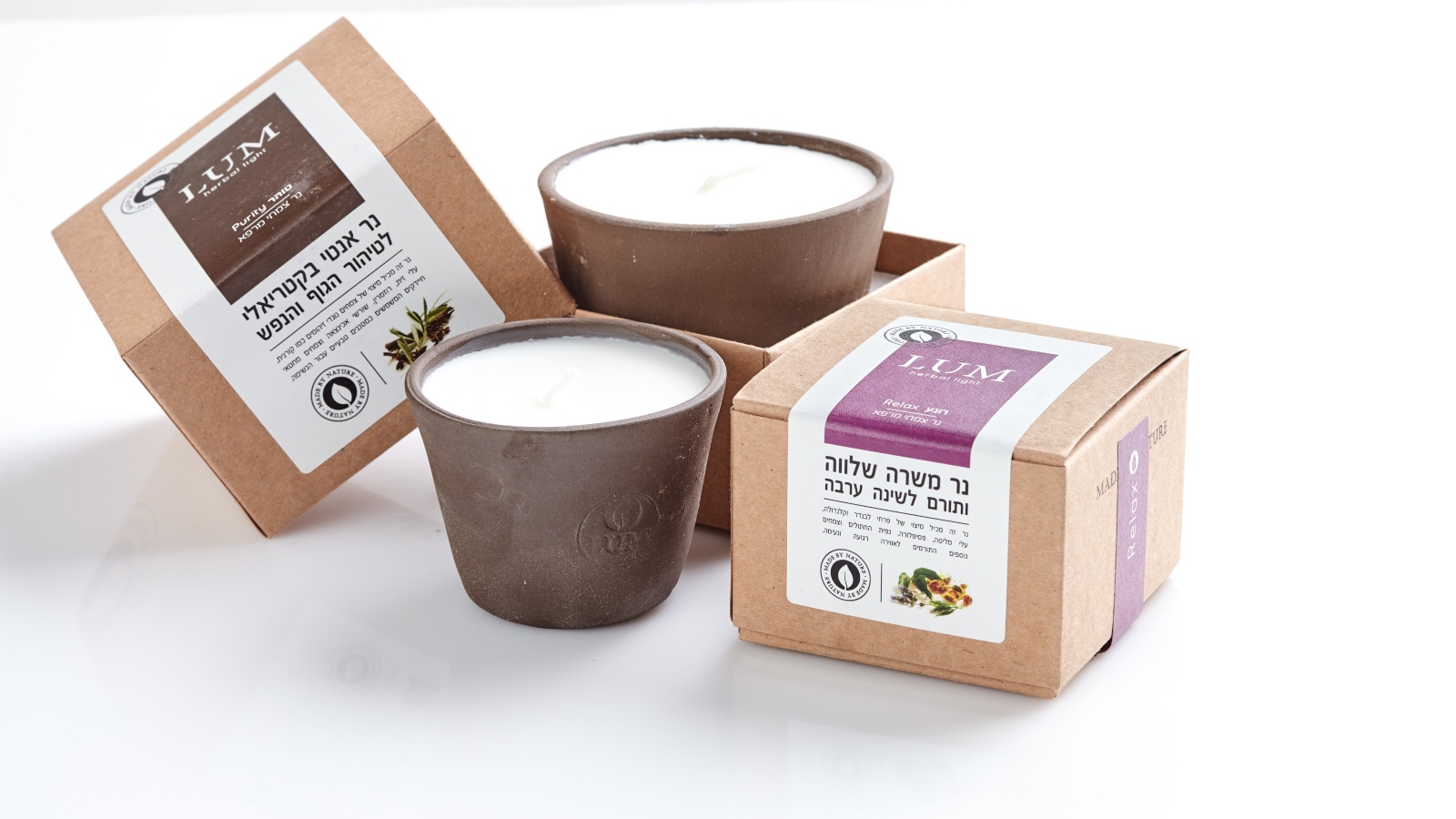 Candle sales make up 70% of the Youth of Light budget. The other 30% is from the government and philanthropy.

“We need help in finding more customers for our candles because that’s the backbone,” says Oren, who is also a professional parenting expert.

As for Sagie, who started the whole story: He is almost 32 and has a small business of his own. And he still works with Youth of Light.