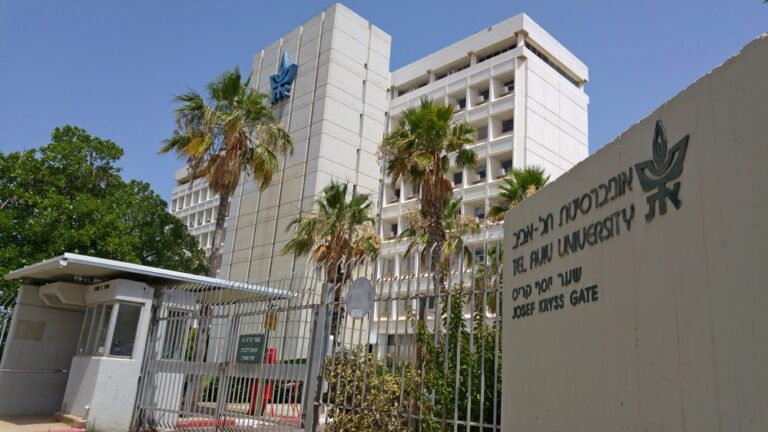 Researchers from Tel Aviv University believe that environmental responses in our lives can be inherited by future generations. Photo of the university by Shutterstock

Epigenetics is the study of physical changes in gene expression that do not alter DNA structure. There has long been controversy about whether epigenetic changes are passed on to offspring.

Israeli researchers have discovered that laboratory worms transfer information about their parents’ physical environment through small RNA molecules that occur “independently of changes to the DNA sequence,” explains Prof. Oded Rechavi, a neurobiologist studying worms and epigenetics at the Sagol School of Neuroscience at Tel Aviv University.

In a previous study, Rechavi found that worms can give their offspring a survival boost by transferring information concerning viral infection, nutrition and even brain activity.

“Responses to environmental changes, such as stress, involve small RNA molecules that silence or block the expression of certain genes” in their descendants, Rechavi says.

That discovery was of clear interest beyond worms. Do humans also pass on responses to the environment through epigenetic inheritance, and if so, how?

In new research, published last week in the scientific journal Cell, Rechavi and research student Leah Houri-Zeevi set out to determine ifany specific rules govern inheritability via these small RNA molecules, and whether it occurs passively and randomly.

C. elegans is the worm used by the researchers. It’s widely used for research on transgenerational epigenetic inheritance for several reasons, Rechavi says.

“Its generation time is just three and a half days, allowing us to study many generations in a short period of time; every worm produces hundreds of descendants, providing strong statistical validity; environmental exposure can be fully controlled; and each worm fertilizes itself, so that differences in DNA are almost completely neutralized.”

Houri-Zeeviadds that “epigenetic inheritance through small RNA endures for about three to five generations.”

But it’s not the same for every worm. Some “are strongly affected by their ancestor’s environmental responses while others do not inherit the epigenetic effect at all – despite the fact that all the offspring are almost identical genetically.”

To solve the puzzle, Rechavi and Houri-Zeevi used a genetically engineered worm carrying a gene that produces a fluorescent protein – essentially making the worm glow in the dark. The researchers then added a heritable small RNA that “silenced” the fluorescent gene and waited to see which descendants inherited the silencing response.

It was a painstaking process. Houri-Zeevi wound up studying more than 20,000 individual worms!

In the end, the researchers were able to delineate three laws that may explain who inherits epigenetic information – for worms today, maybe humans tomorrow.

First law: Inheritance is uniform in worms descending from the same mother. The researchers realized that differences in inheritance that they had noticed previously were “concealed” because they had examined whole worm populations rather than distinct lineages.

Second law: Inheritance is different in worms from different mothers, even though the mothers are supposedly identical. The researchers now understood that this is because the descendants randomly adopt different “internal states” that determine the duration of inheritance and thus the fate of subsequent generations.

Third law: The greater the number of generations in a specific lineage that inherits a trait, the greater the probability that it will continue on to the next generation as well.

“We hope that the mechanism we have discovered exists in other organisms as well, but we’ll just have to be patient,” Rechavi cautions.

Patience has served the science of genetics in the past. “Genetic research began with Friar Gregor Mendel’s observations in peas,” Rechavi says, “and today we use Mendel’s laws to predict whether our children will have smooth or curly hair.”

The worms “changed the rules by showing us that inheritance outside the genetic sequence does exist,” he adds. The present study sets out laws “and introduces some ‘order into the chaos.’”