Philanthropic tennis enthusiast Freddie Krivine found a way to serve the ball into an Arabic-speaking court. 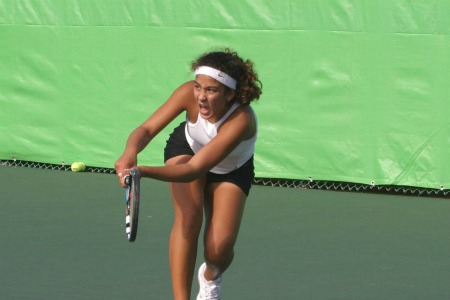 Anywhere in the world, marginalized populations have less access to good education, advanced music programs and sports facilities. This is no less true in Israel, where one-fifth of the population is made up of Israeli-Arab Muslims and Christians.

For multiple reasons, some not anyone’s fault, this minority gets fewer opportunities in sports, which could lead to higher achievements in other areas and improved track records in school, relationships and future community building.

An avid supporter of Israeli tennis, philanthropist Freddie Krivine came from the United Kingdom with his wife to live in Israel in 1984. Since the early 1970s, he’d been supporting the Israel Tennis Centers and women’s tennis, and eventually became president of the Israel Tennis Association. But at an event of 600 players in the late 1990s, he was surprised to see only four were from the Arab sector.

So Krivine decided to embark upon a new project for young Arabs throughout Israel.

Carrying on her dad’s legacy

Although Krivine passed away in 2005 at age 84, his daughter Jane took over with some encouragement from the board of her dad’s philanthropy, the Freddie Krivine Foundation.

The first priority was building locally, Jane Krivine says. “My father saw it as extremely important to create facilities in their own communities so [Arab] children can come and play on their own time,” she tells ISRAEL21c.

Since 1998, her dad’s foundation has subsidized tennis lessons for about 6,000 young Israeli Arabs, some of whom have gone on to be coaches when the Jewish Israelis go into mandatory military service.

The Freddie Krivine Foundation has built and surfaced more than a dozen tennis courts in cities like Nazareth, so young Arabs don’t have to get in a bus and travel miles to play their sport. It also runs specialized coexistence programs in Caesarea, Israel and in Boston, Massachusetts.

Besides creating and maintaining courts, the foundation highly subsidizes tennis lessons in Arab communities, setting fees on par with what people would pay locally for other sports. Charging a fee encourages commitment from the parents and the children, Jane Krivine says. 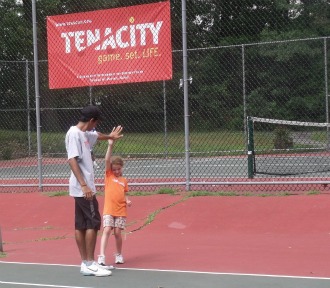 “In some cases, the parents are very proactive in the sports interests of their child, but in the [less privileged] communities, where the parents have more children, maybe they don’t have cars and they may not be able to taken them to the lessons. And the costs and cost of transport is something they can’t afford.”

The foundation also trains coaches, encouraging older teens when they are 18 to enroll for a coaching certificate from the Wingate Institute for Physical Education and Sport near Netanya, and it gives special support to star players.

A lesson for the giver

The foundation’s success stories include Ruan Zubidate from Bizmat Tivon, a Bedouin who is the top female Arab tennis player in Israel. She travels to tennis matches around the world representing Israel.

Now in its second year, the foundation’s Tenacity program brings young Arab coaches to Boston for the summer, where they learn English and teach tennis to vulnerable populations of teens in the United States. One of those who participated was Ebraheem Fhmawi, a 19-year-old from Faradis, near Haifa, who dreams of studying chemical engineering.

Fhmawi was among the first to join the Krivine Foundation’s coexistence program in Caesarea, where Jewish kids from the well-to-do coastal city are matched with Arab kids from Jisr el Zarka.

Arab and Jewish kids have little contact and rarely get to know each other, Krivine says. But at first she was skeptical about this program of her father’s, questioning the efficacy of busing kids to Caesarea for coaching lessons starting at age eight. The whole project “was a costly venture for us,” she says.

“This program in Caesarea is with well-heeled families from a fancy place. We whittled it down to about 10 children who were meeting there about four or five times a week, coming in from Jisr el Zarka.

The fruits of her father’s labor came not long ago, when the kids had reached 18 and Krivine asked them about their future. Four of them were going on to medical school, and one wanted to be a veterinarian. “All were doing something really worthwhile. They knew that they could do it,” she reports.

And tennis, invariably, was at the center of their success. The program provided a place where they learned that Arabs, too, could easily reach for the stars — and catch them — if only they were shown how.