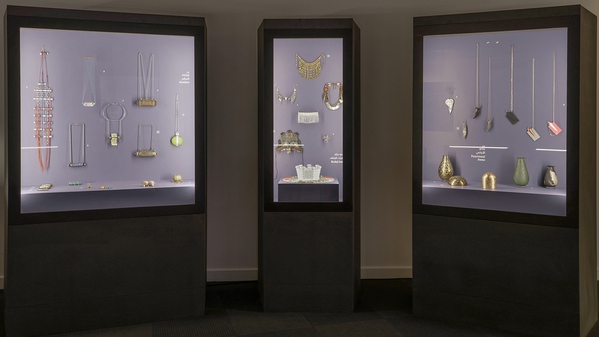 “Jewelry Making: Past & Present” at the Museum for Islamic Art, Jerusalem. Photo by Shay Ben Efraim

Over the past four decades, the Museum for Islamic Art in Jerusalem has earned a worldwide reputation in its field. In addition to Islamic art, it also hosts unique temporary exhibitions designed to bring all peoples of the region closer together.

“Jewelry Making: Past & Present” is one such temporary exhibition. Running through November 16, the exhibition showcases ornaments associated with rituals in Islam, Judaism and Christianity.

You can see rare items from the museum’s permanent collection, along with Jewish vessels and amulets from Islamic countries from the private collection of the William Gross family, plus a selection of never-before-seen ecclesiastical objects on loan from the Terra Sancta Museum of the Custody of the Holy Land (better known as Custodia Terræ Sanctæ).

Dating from the 16th to 19th centuries, this collection is made up of gifts from donors in various Christian nations of Europe – Spain, Portugal, Italy (Naples, Sicily) and the Austro-Hungarian Empire. These donors regularly sent money and goods to assist the Franciscans charged with maintaining Christian sanctuaries in the Holy Land.

The second part of the exhibit features modern pieces created especially for the exhibition by 45 Israeli artists and artisans. They toured the museum warehouses with Islamic art expert Rachel Hasson and then fashioned new pieces of jewelry inspired by ones from the past. The contemporary and antique pieces are displayed side by side.

Exhibition curator Dr. Iris Fishof wrote that “This confluence generates intriguing dialogue between past and present, tradition and change.”

Artist Vered Babai translated the shape and style of 12-13th century Persian blue ceramic talismans into another medium that is also believed to bring good luck. “Touch Wood” is made of pencil shavings rolled up to resemble the beads’ geometric proportionality but differ in terms of color, material and durability.

Vered Babai’s “Touch Wood” is made of pencil shavings resembling the shape and style of 12-13th century Persian ceramic good-luck beads. Images courtesy of the Museum for Islamic Art, Jerusalem

A heavy pair of earrings from 6th-7th century Syria reminded silversmith Einav Benzano of her seamstress grandmother, Rachel, who immigrated to Israel from Meknes, Morocco in the 1950s, leaving behind dreams of showcasing her dress designs in Paris. Two small baskets, woven in pure silver thread, hold small scrolls tied with the red thread – symbolizing protection against evil. Written on the scrolls is a personal yet universal story about the hardships of leaving one culture to integrate into a new.

For silversmith Einav Benzano, a pair of 6th-7th century Syrian earrings brought to mind her grandmother, who came to Israel from Morocco. Images courtesy of the Museum for Islamic Art, Jerusalem

Since time immemorial, seals have been one of the oldest forms of personal identification. A set of five 3D printed signet rings designed by Yael Friedman, entitled “Who Am I?” raises the question of identity. Because signet rings were often believed to have supernatural powers — as in the case of a silver ring inscribed with a Kabbalistic acronym — each of the rings is embossed with a different animal that symbolizes strength.

The silver ring with Kabbalistic inscription, along with all other Judaica in the exhibition, is from the William Gross collection. Yael Friedman’s “Who Am I?” 3D-printed signet rings raise the question of identity and power.Images courtesy of the Museum for Islamic Art, Jerusalem

The ancient cosmetic known as kohl was used for cosmetic and medicinal purposes and was also thought to ward off the evil eye – a curse cast by another’s malevolent glare.

In her contemporary piece, jeweler Anat Grozovski-Aboucaya plays with the shape of a 19th century Yemenite kohl bottle crafted in traditional silver filigree. She also plays with a concept: the title of her work, “Le Marit Ayin,” means “appearance to the eye,” referring to the halakhic concept whereby permissible actions that give the appearance of being in violation of Jewish law are forbidden, as onlookers might arrive at amistaken– even possibly malevolent – conclusion.

In “Le MaritAyin,” Anat Grozovski-Aboucaya played with the both the shape and concept of this 19th century Yemenite silver filigree kohl bottle, as the cosmetic was also thought to ward off evil. Images courtesy of the Museum for Islamic Art, Jerusalem

A 19th century Berber necklace from the Draa Valley in Morocco –silver, coral, amber, glass beads, cloisonné enamel strung on twisted twine — was made to be handed down from generation to generation. In sharp contrast is the repurposed chic of Merav Rahat’s “What’s the ‘Matter’” necklace composed of what would ordinarily be considered junk: shredded tin cans, electric wire, fabric, nuts and bolts, discs, electronic components, trinkets, plastic, old bottle caps, bits of branch – all coiled, soldered, threaded, tied, sewn and pasted together to make a statement about past versus present and globalized, disposable culture.

The heirloom 19th century Berber necklace from the Draa Valley in Morocco stands in sharp contrast to Merav Rahat’s chic “What’s the ‘Matter’” necklace composed of what would ordinarily be considered junk. Images courtesy of the Museum for Islamic Art, Jerusalem

Jeweler Rill Greenfeld chose as inspiration a silver enameled 19th century Berberpendant from Morocco decorated with talismans to ward off the evil eye, its oval shape symbolizing fertility. Greenfeld preserved the round shape but gave the 3D-printed pendant an update with a modern anti-evil eye decoration and a new function as a container for birth-control pills.

Rill Greenfeld’s “Fertility Now” birth-control pill box comments on the shape and purpose of a 19th century talisman pendant from the Atlas Mountains of Morocco. Images courtesy of the Museum for Islamic Art, Jerusalem

Inbar Shahak’s “House” ring was first 3D printed and then cast in sterling silver. On her website, Shahak writes that the ring honors her family’s origins in southern Morocco, and “…[was] designed to remind myself throughout the day where I come from, and where I am going to, and to ensure I can defend myself against anyone who blocks my safe journey home.”

At left, Inbar Shahak’s contemporary “House” ring, 3D printed and cast in sterling silver. At right,traditional Bedouin jewelry by Hussein and Mansour Awad of the Jabaliya tribe of the Sinai Desert. Image courtesy of the Museum for Islamic Art, Jerusalem.

Bedouin silver from Yemen and the Sinai

The third part of the exhibition features jewelry that belonged to beloved singer, the late Ofra Haza, crafted in the traditional Yemenite silver filigree style by master silversmith Benzion David, who was specially commissioned to design many of the pieces worn onstage by Haza.

An eighth-generation descendant of jewelry makers from Najran in north Yemen, David learned the trade from his father and continues to work out of a studio in the Artists’ Quarter of Old Jaffa.

The exhibition also includes traditional Bedouin jewelry made by Hussein Awad and his son, Mansour Awad, of the Jabaliya tribe in the Sinai Peninsula,near St. Catherine’s Monastery.

“Jewelry Making: Past & Present” is one of the highlights of this year’s Open House Jerusalem event. Tours will begin with an explanation about the modernist stone building and continue with guided tours. Registration for all Open House Jerusalem tours opens on October 25.