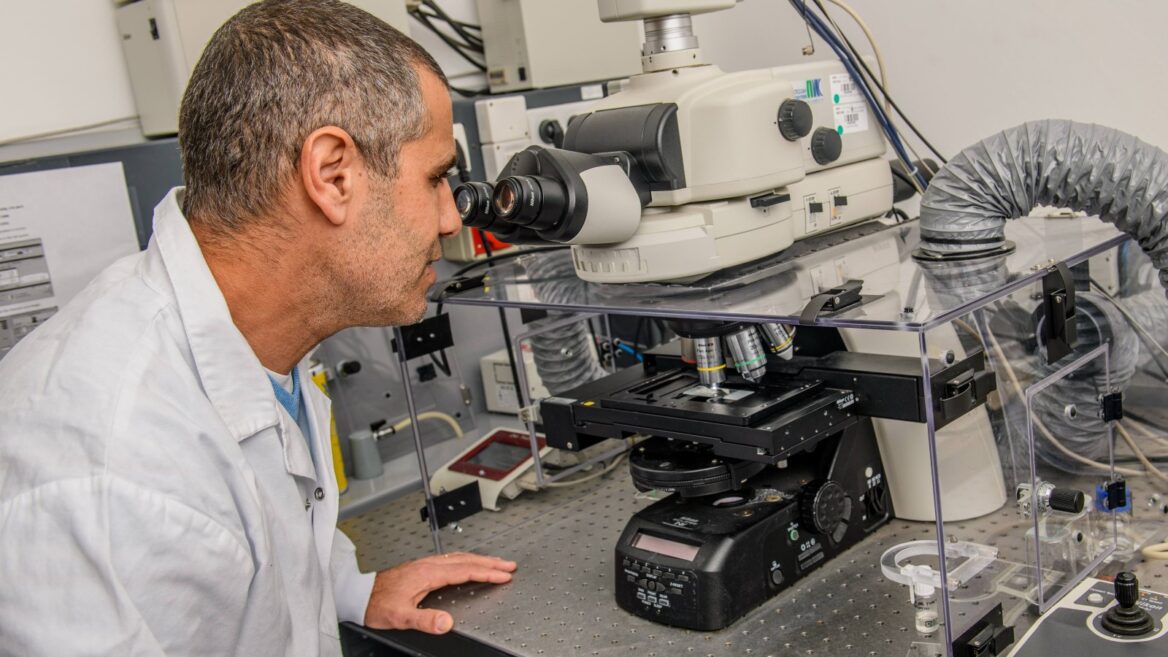 Medical science has not yet found a way to restore walking ability in someone paralyzed from a traumatic spinal cord injury.

Within a few years, a first-of-its-kind 3D-printed spinal cord tissue implant, made from the patient’s own cells, could make that dream come true.

“It is like science fiction,” says Dr. Asaf Toker, CEO of Matricelf, the company working to bring Dvir’s groundbreaking technology to market.

Dvir and Alon Sinai cofounded Matricelf that year and it went public in 2021. On January 30, the company signed an exclusive global licensing agreement with Tel Aviv University technology transfer company Ramot to commercialize and utilize the patent for 3D-printing tissues and organs.

“With our technology, we can create any tissue we want,” Toker tells ISRAEL21c. “The first one is neural implants for people with a spinal cord injury causing paralysis.”

Dvir explained that the technique begins with taking a small biopsy of belly fat tissue from the patient.

“This tissue, like all tissues in our body, consists of cells together with an extracellular matrix of substances like collagens and sugars,” he explained.

“After separating the cells from the extracellular matrix, we used genetic engineering to reprogram the cells, reverting them to a state that resembles embryonic stem cells capable of becoming any type of cell in the body.”

The extracellular matrix didn’t go to waste. It formed the basis of a personalized hydrogel that will not trigger an immune response or rejection after implantation – which is the main problem with donor implants.

“We then encapsulated the stem cells in the hydrogel and, in a process that mimics the embryonic development of the spinal cord, we turned the cells into 3D implants of neuronal networks containing motor neurons,” said Dvir.

The human spinal cord implants were then implanted in mice. Half had only recently been paralyzed (the acute model) and half had been paralyzed for the equivalent of a year in human terms (the chronic model).

Up and walking again

Following the implantation and a rapid rehabilitation process, 100 percent of the mice with acute paralysis and 80% of those with chronic paralysis regained their ability to walk.

“This is the first instance in the world in which implanted engineered human tissues have generated recovery in an animal model for long-term chronic paralysis – which is the most relevant model for paralysis treatments in humans,” Dvir said.

“Individuals injured at a very young age are destined to sit in a wheelchair for the rest of their lives, bearing all the social, financial, and health-related costs of paralysis” because there has never been an effective treatment, Dvir pointed out.

“Our goal is to produce personalized spinal cord implants for every paralyzed person, enabling regeneration of the damaged tissue with no risk of rejection.” 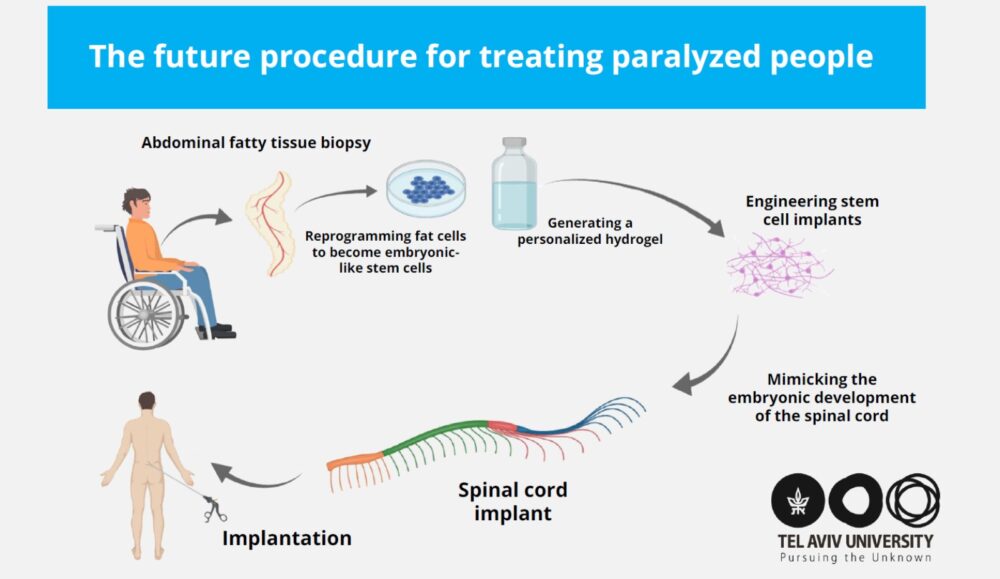 Following discussions with the US Food and Drug Administration (FDA), Matricelf plans the first human clinical trial of the spinal cord implant at the end of 2024.

“Since we are proposing an advanced technology in regenerative medicine, and since at present there is no alternative for paralyzed patients, we have good reason to expect relatively rapid approval of our technology,” said Dvir.

In the meantime, additional efficacy and safety trials will be done on lab rats. 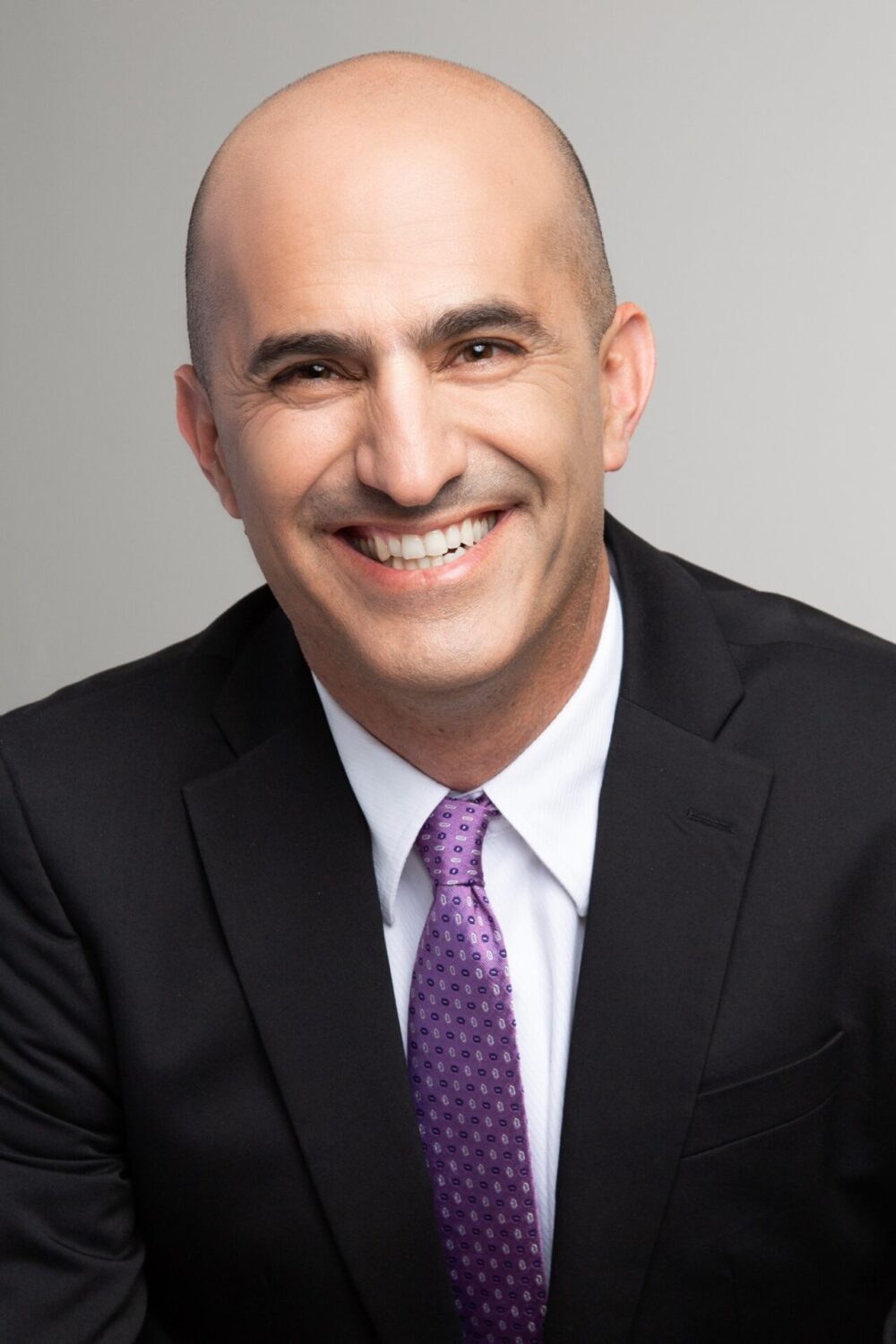 “Tissue engineering requires two ingredients: cells and extracellular matrix as a scaffold for the cells to build the tissue,” he says.

“Many companies do tissue engineering using synthetic materials for scaffolds or using cells from a donor. But when you introduce foreign material to the body, the immune system attacks it, and the implant fails unless the patient takes drugs to suppress the immune system.”

The Matricelf technology developed by Dvir uses autologous (the patient’s own) cells and extracellular matrix. The immune system recognizes them and doesn’t attack them.

“The new licensing agreement with Ramot also enables us to 3D-print tissues and organs,” says Toker.

“An organ is built from a variety of tissues and cells. So our bioprinter has several bio-ink cartridges to print different tissues in the same printing, just like in four-color printing where the printer knows where to put each color.”

The bio-ink is enclosed inside another fluid to support the organ’s structure.

“When you print a hollow organ like a heart, if you don’t use this technology the tissue will collapse,” Toker explains. “To print organs with cavities inside them you need the technology to support it. That is our unique aspect.” 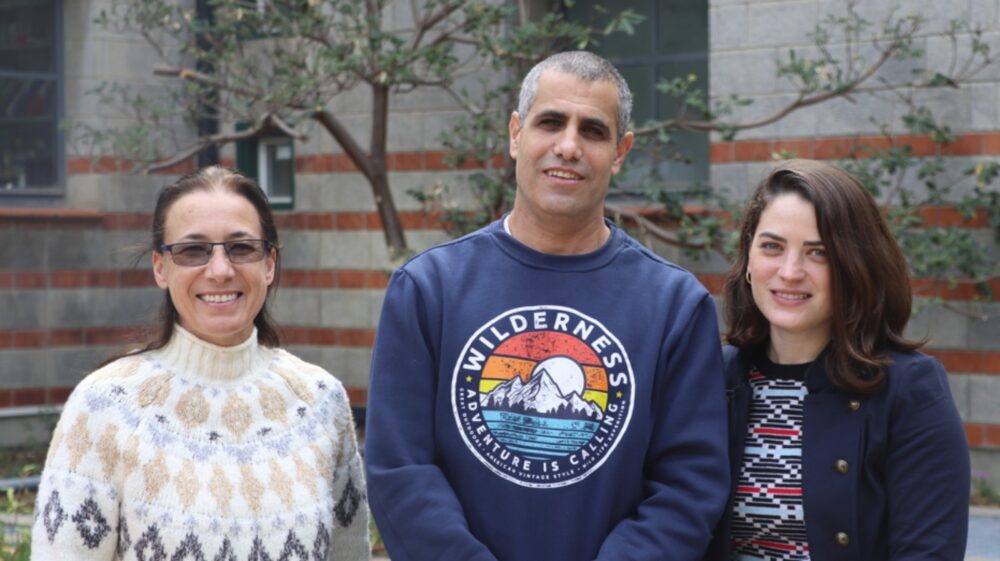 The spinal implant was developed by Dvir and lab members Lior Wertheim, Dr. Reuven Edri and Dr. Yona Goldshmit along with Prof. Irit Gat-Viks from the Shmunis School of Biomedicine and Cancer Research, Prof. Yaniv Assaf from the Sagol School of Neuroscience, and Dr. Angela Ruban from the Steyer School of Health Professions, all at Tel Aviv University.

Matricelf, based in Ness Ziona, employs 10 people – seven of whom are women, Toker tells ISRAEL21c. It is well-positioned to become a prominent player in the 3D bioprinting market, estimated to be worth about $650 million in 2019 and an expected $1.6 billion in 2024. 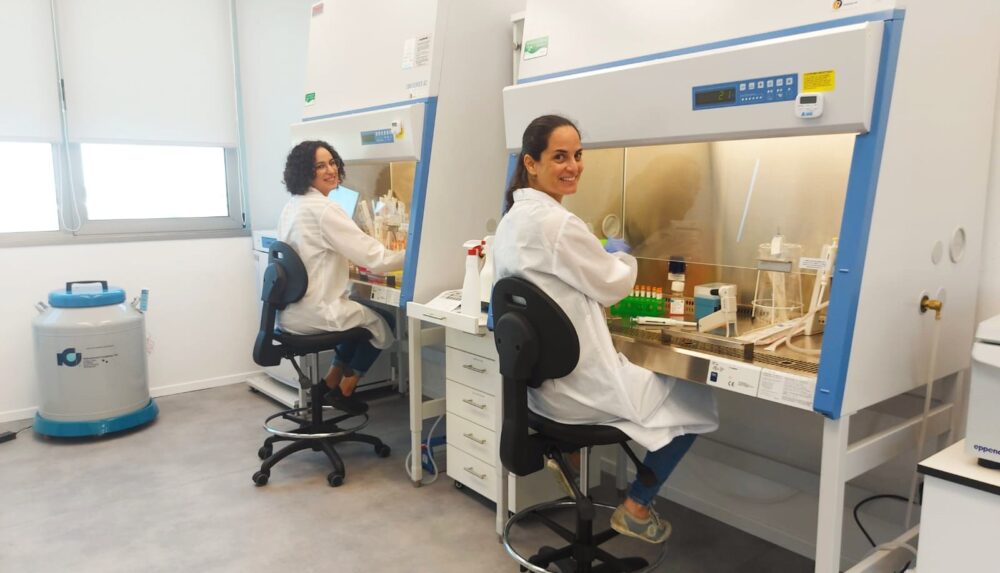 Seven of Matricelf’s 10 employees are women. Photo courtesy of Matricelf
UNCOVER ISRAEL - Get the ISRAEL21c
Weekly Edition free by email
Sign Up Now!
Bring Israel's story to life.
Millions of people around the world rely on us to gain a deeper understanding of Israel. We are the trusted source for original content you won't find anywhere else.
You can make a difference. Donate today to support journalism that brings Israel’s story alive.
SUPPORT ISRAEL21c
Read more on:   Health, Technology, spinal cord injury, Matricelf, organ implants, 3D printing